I know, I swiped the title for this post from the Red Hot Chili Peppers, but it just seems to fit these old pictures from under, or near under, the gone but not forgiven Embarcadero Freeway. (Thumbnail images) 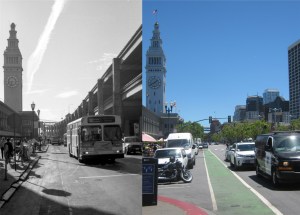 The Muni 32 rolling past the Ferry Building in a SFMTA picture: I don’t think the 32 still runs. 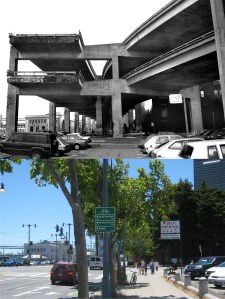 The Embarcadero Freeway ended here at Broadway. It was originally planned to reach all the way to the Golden Gate Bridge. Can you imagine how awful that would have been? (Flickr) 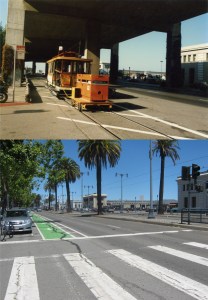 Hmm, a little contraption pulling a larger contraption; looking northeast toward where the walking and fishing Pier 7 is from the first of these next few Market Street Railway pictures posted on the internet.

Let’s follow along as they move south down the Embarcadero. 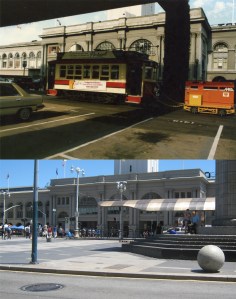 They’re at the Ferry Building now. Hey, it’s a Dinky, I thinky. Sorry! Dinkies were a sort of combination cable car and streetcar that ran for awhile along Market Street before and after the 1906 Earthquake.

One thought on ““Under the bridge, downtown””