On April 7, 2020, three weeks after the shelter-in-place order was given across the Bay Area, I went over to Fisherman’s Wharf to take some photos that I posted here on the following day. Before the pandemic, Fisherman’s Wharf was said to be the second most visited tourist attraction in California after Disneyland. However, on April 7, 2020, it was empty, lonely, and depressing. This last Tuesday, the Wharf opened up fully again and I went over there the next day to update the pictures I took in April of 2020. 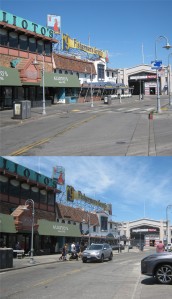 The end of Taylor Street, looking toward Pier 45 in the background: Even the Musee Mecanique Arcade has reopened.

People are back alright, in all shapes and sizes.

Looking toward the Boudin Bakery from the northwest corner of Taylor and Jefferson Streets.

They’re packing them in again on the Red and White tour boat cruises, as well. 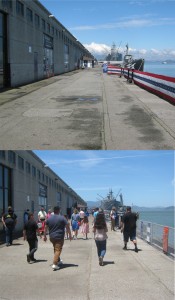 Visitors are back, wandering down Pier 45 toward the World War Two submarine, the USS Pampanito, and the Jeremiah O’Brien Liberty Ship.