Dong Kingman was a Chinese American artist who first gained recognition as a Works Progress Administration painter during the 1930’s. Wikipedia writes of him as “one of America’s leading watercolor masters.” In 1967, “Kingman”, as he preferred to be called, co-created a book about San Francisco along with columnist Herb Caen entitled ‘San Francisco – City on Golden Hills’. In the preface Caen writes, “It is entirely appropriate that Don Kingman should be my collaborator on this book, for San Francisco – the city of his heart and mine – has been spiced and enriched by the strong flavor of China ever since it came of age as a world metropolis.” The text by Herb Caen is accompanied by paintings from Dong of a modern San Francisco, many that now seem nostalgic. Dong Kingman died in May of 2000. These are then and nows of some of his paintings from the book.

California Street, looking down toward Chinatown and Old St. Mary’s Church before the skyscraper boom of the late 1960’s:

Maiden Lane, looking toward Stockton Street and the St. Francis Hotel: Dong has the Dewey Monument in Union Square a little closer to the south side of Maiden Lane than reality, but that’s art.

Market Street at the Embarcadero across from the Ferry Building looking south: Some of the structures in the background are the Bay Bridge, the Embarcadero Freeway, and the YMCA Building. The block of buildings where the Ensign Café was at were demolished at the end of the 60’s.

You can see the Ensign Café in a scene from the 1957 film ‘Pal Joey’ where Frank Sinatra dodges from the police across the street at the Ferry Building.

Candlestick Park before it was enclosed in 1971 to accommodate the San Francisco 49ers football team moving in:

Another view of Candlestick Park from the hill behind it taken during the year it was demolished in 2015. Ah, what fun we had at that place, family and friends!

When you stand on Hyde Street between Chestnut and Bay Streets looking toward the Bay and Alcatraz Island, you’re looking at one of the most beautiful views in San Francisco. 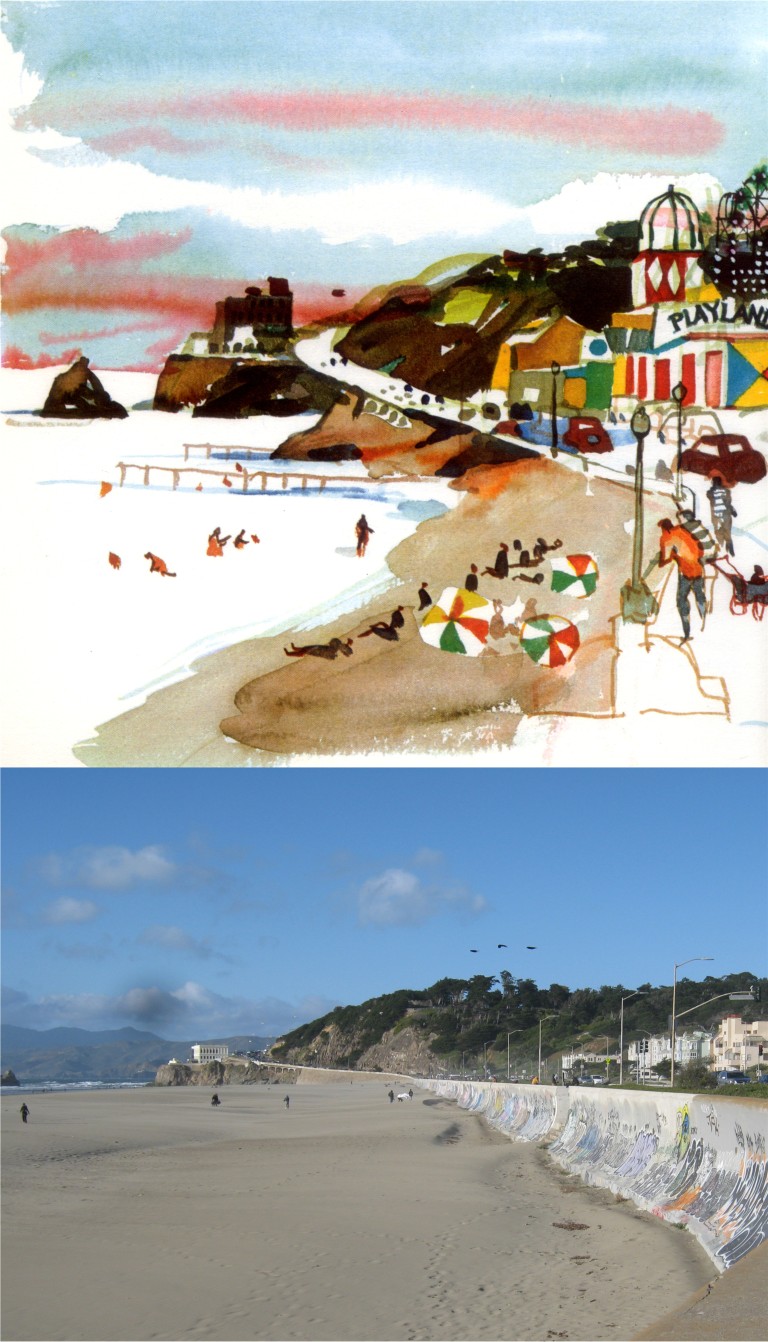 Ocean Beach at the Great Highway, looking toward the Cliff House and the long gone Playland-at-the-Beach: Playland was where the condominiums on the tight are today.

The eastern side of the now remodeled Broadway Tunnel on the edge of Chinatown: That’s a Mason Street cable car, a line that still exists, passing by on the right in Kingman’s painting.

Flat Stella at the Cliff House: She got kind of messed up when I threw her in the Pacific Ocean, but she was better later on after she stopped coughing. 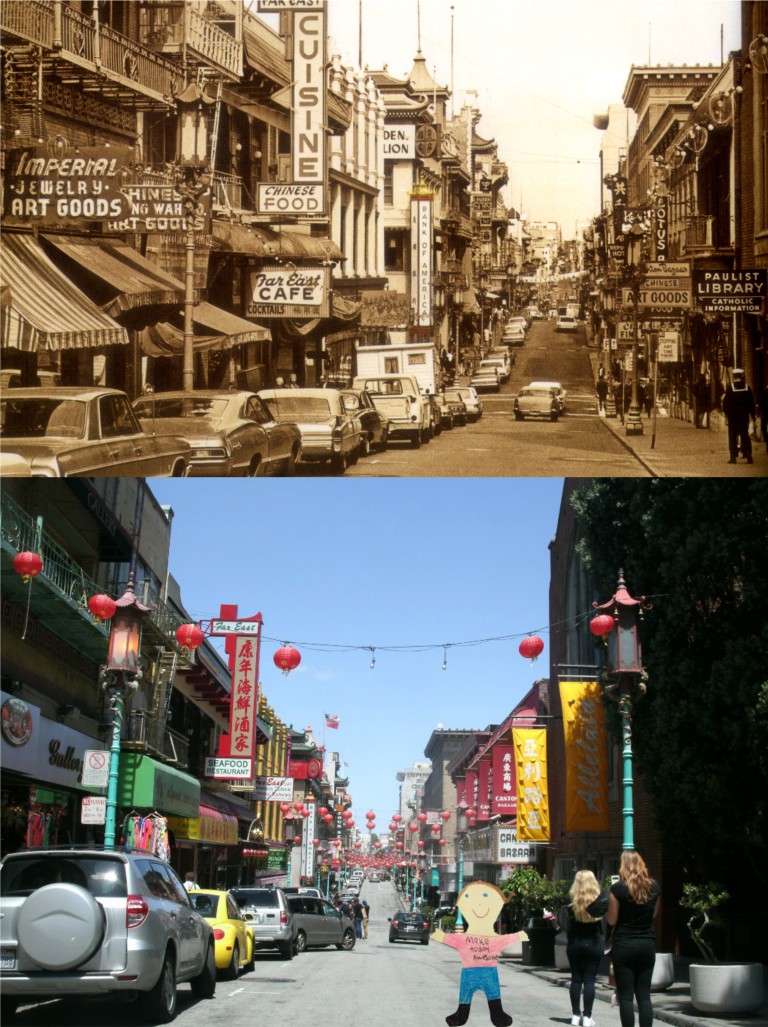 Stella in Chinatown: I told her that the Chinese are very big on paper ornaments so if she didn’t behave herself, I’d sell her into paper slavery.

Stella at the Palace of Fine Arts: Stella said to me that the lady in the old picture was weird looking. I said to her “People who live in glass houses shouldn’t throw stones.”

Stella at the oldest church in San Francisco, Mission Dolores: Stella asked me who Dolores was. I just told it that she was Father Junipero Serra’s big sister.

Stella at the Golden Gate Bridge: Stella was really impressed with the bridge, and she asked me if it was real. Everybody started laughing at her, and I, kind of, felt sorry for her!

‘The Streets of San Francisco’ was often corny and pat, but just as often realistic and exciting. However, one thing it always had going for it was great San Francisco location shooting. Probably, no television show will ever again have as many on location scenes. Yesterday was a perfect day to take a Buddy Boy” and “Papa Cop” tour of San Francisco. 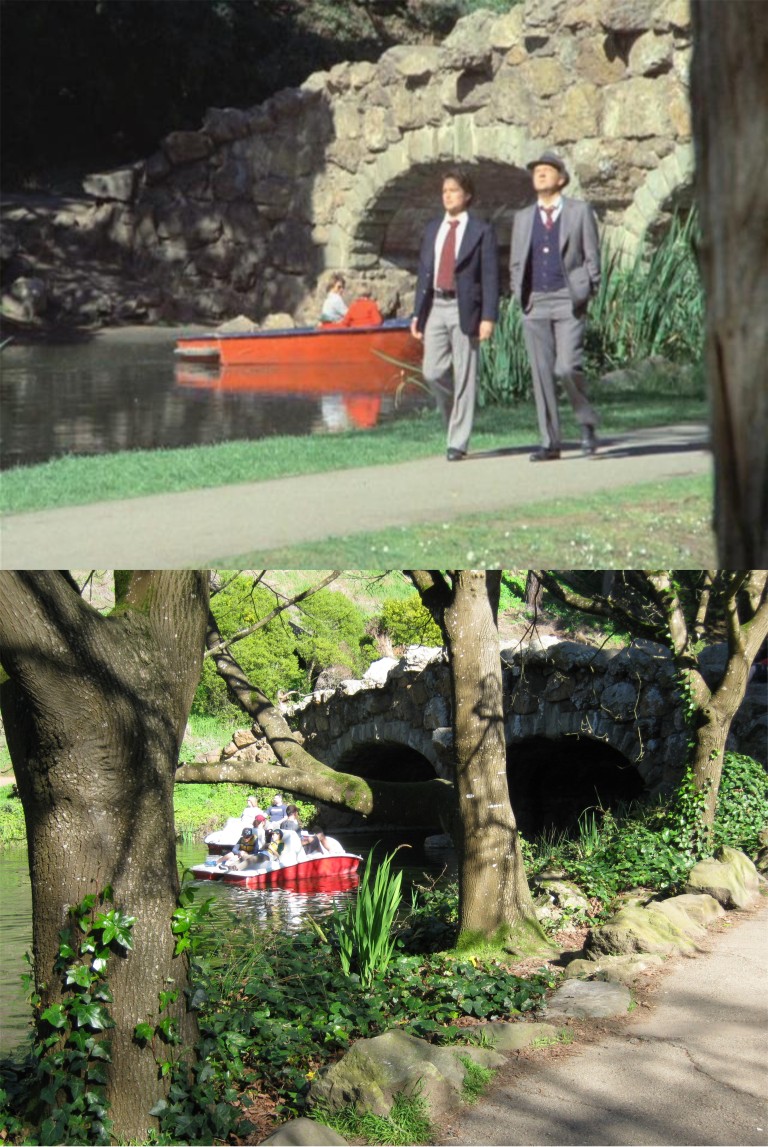 Karl Malden played Inspector Michael Stone and Michael Douglas played Inspector Steve Keller. They got along just as well with each other as Napoleon Solo and Illya Kuryakin did in The Man from U.N.C.L.E. and saved each other’s life about as often. Here they are at the old Rustic Bridge at Stow Lake in Golden Gate Park. In the dialog at this point Malden is saying, “It’s so peaceful, we should come here more often.” This is about one of the most peaceful spots in San Francisco. The path is different and there are more trees here now.

They walk along Stow Lake past the bridge for awhile.

“Alright, Buddy Boy, I’ll pull them over and you plant the dope next time. Okay?”

Actually, they were pretty honest and fair. 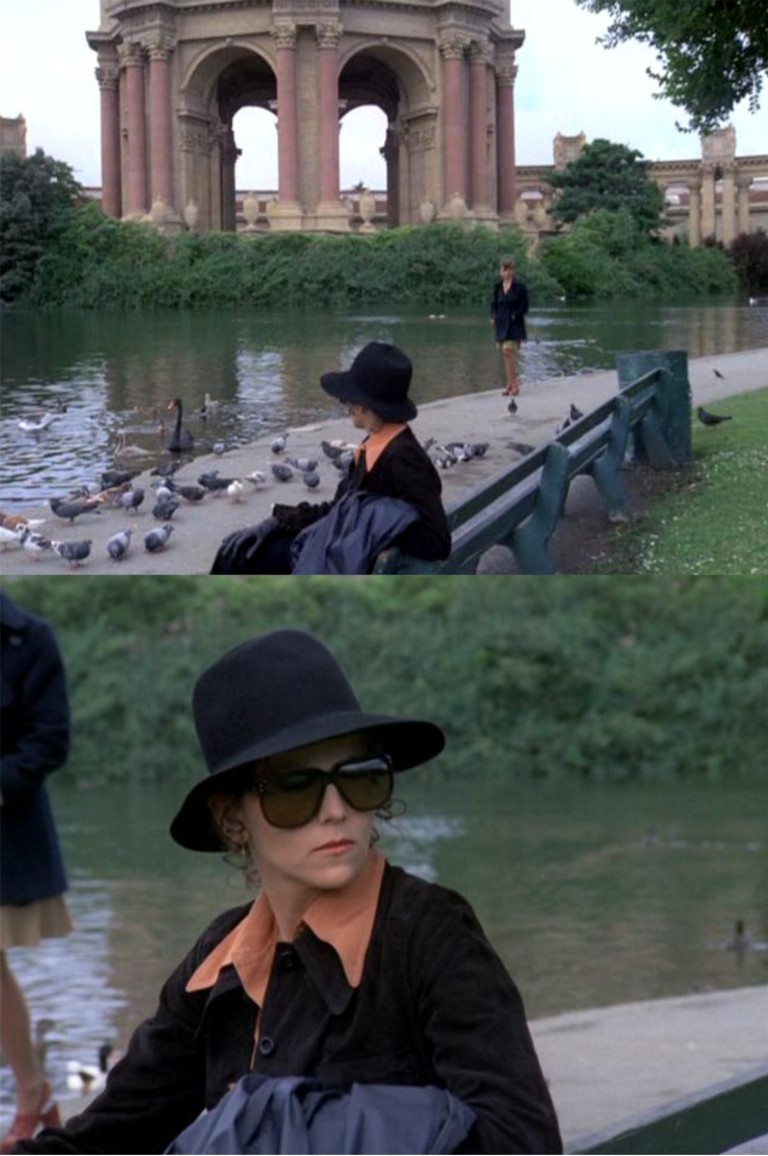 In one episode Steve Keller actually sleeps with one of the costars. That was a rarity! However, they didn’t live happily ever after. The girl he’s sleeping with,  Brenda Vaccaro, turns out to be a hit lady for the mob who’s killed at least ten people. Somehow, that’s not a turn off to me! Maybe, it’s a “guy thing”. At the end of the episode, she goes to the Palace of Fine Arts to make another “whack”.

This was about where she was sitting. 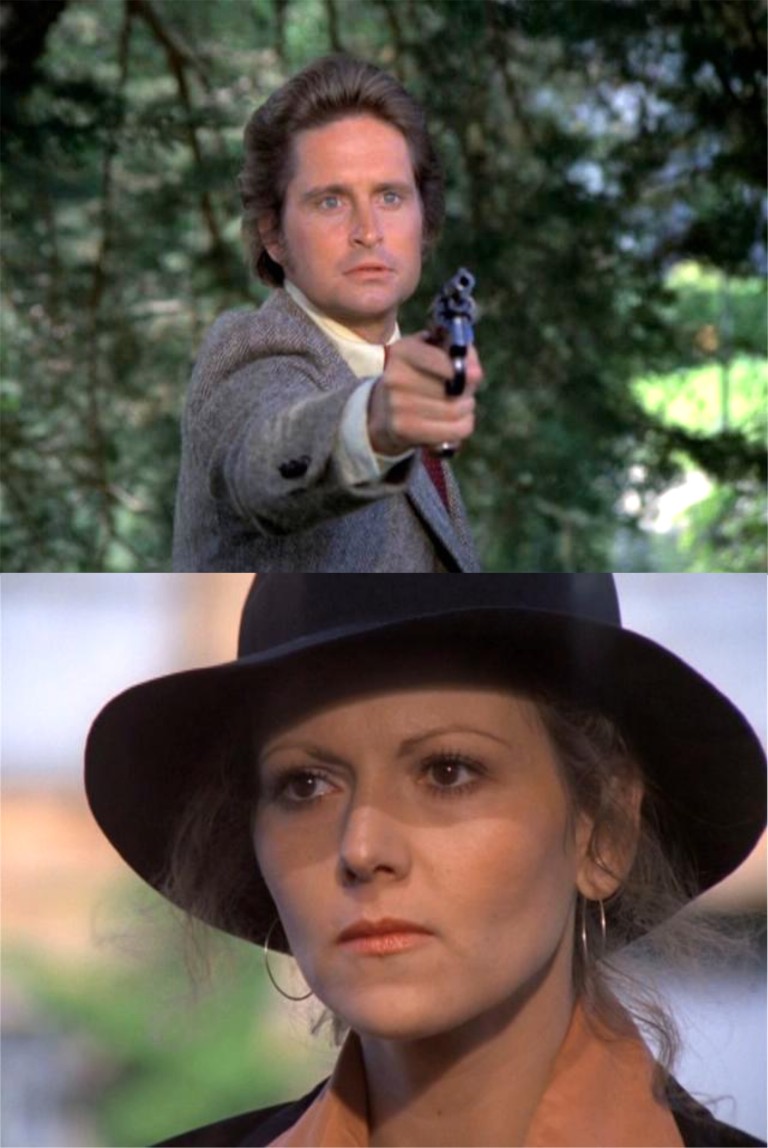 Keller confronts her after the killing at the Palace, and finds out who she is. He hesitates shooting her. Well, that’s love!

She’s not as sweet, and is about to silence him with a silencer.

Papa Cop, Stone, pulls up here on Baker Street just in the nick of time.

Stone prevents her from spoiling every good memory Keller had of her, and she’s off to jail.

Now, off to Mission Street and the Embacadero under the old Embarcdero Freeway where there’s Salvation Army Band playing music to the winos in the area. This may have been one of the corny moments I was telling you about.

A miserable drunk stumbles across the Embarcadero. Oh, wait, that’s not polite! I mean, an intoxicated homeless person finds comfort in the bottle while living on the streets.

Why, it’s Leslie “Don’t call me Shirley” Nielsen! Nielsen plays an alcoholic cop who accidentally gets his partner killed while drunk on the job.

“Well, time for a little R&R!” They sure tidied this spot up today. That’s the old YMCA Building in the background.

Hot on the scene of another murder, the boys pull into the old Brocklebank Apartments on the northeast corner of Mason and Sacramento Streets, Nob Hill. The entrance to the Brocklebank is very similar to the entrance of the Mark Hopkins Hotel.

Keller heads across California Street from the Mark Hopkins Hotel to a telephone booth.

Now, this one throws me! At the close of one episode Stone and Keller drop Stefanie Powers off at an airport at O’Farrell and Taylor Streets in the Tenderloin. There never has been an airport in the Tenderloin! Look at the old UHF Channel 44 Building in the background.

There was some type of busy terminal here once but it couldn’t have been an airport. The “Airlines Terminal” sign may have been doctored for the episode. There’s a Hilton Hotel here now.

As the boys say goodbye to Stefanie, we’ll say goodbye to the boys. Karl Malden is dead now, and I don’t read much about Michael Douglas’s health nowadays. I hope he lives as long as his dad has.

While I was working on a post up on Nob Hill today, I was sorry to see that they had demolished the old Crest Garage. Sitting strategically on the southeast corner of California and Powell Street, it can be seen in a number of vintage pictures, old movies, and prime time television shows from the past. Here are a few pictures that I have posted on my blog where the Crest Garage can be seen in the old and current images.

One of the best pictures of the Crest Garage, and also one of my favorite vintage San Francisco pictures, as two cable cars from the California and Powell Street Lines cross the intersection in the 1940’s. The Crest Garage can be seen behind the cable car on the right in my picture. 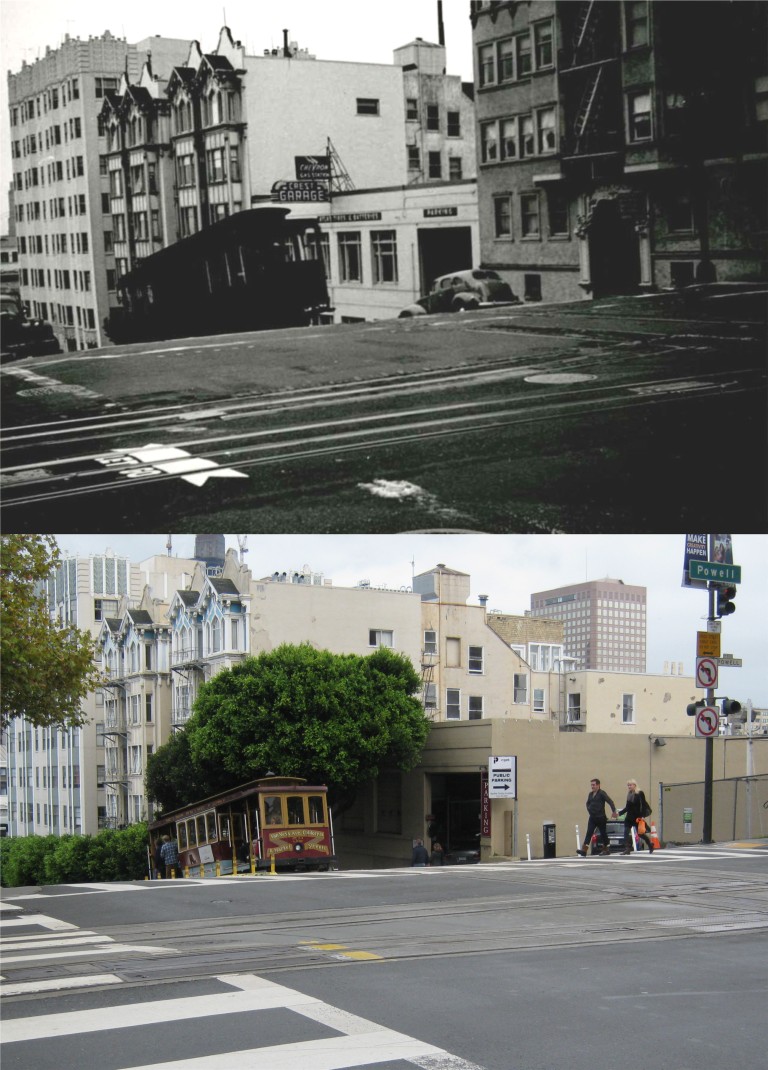 Here’s another then and now of the Crest Garage from the 1940’s that I posted in November of 2016.

In another picture, this one from the early 1950’s just across California Street from the previous picture, the Crest Garage is on the far right in the old photo from Vintage Everyday and with the arrow sign on it in my picture. The apartment building between the garage and Powell Street was demolished by the 1990’s.

In the 1964 movie ‘Good Neighbor Sam’, Jack Lemmon races his Thunderbird past the Crest Garage which by that time had become a Flying A Service Station. 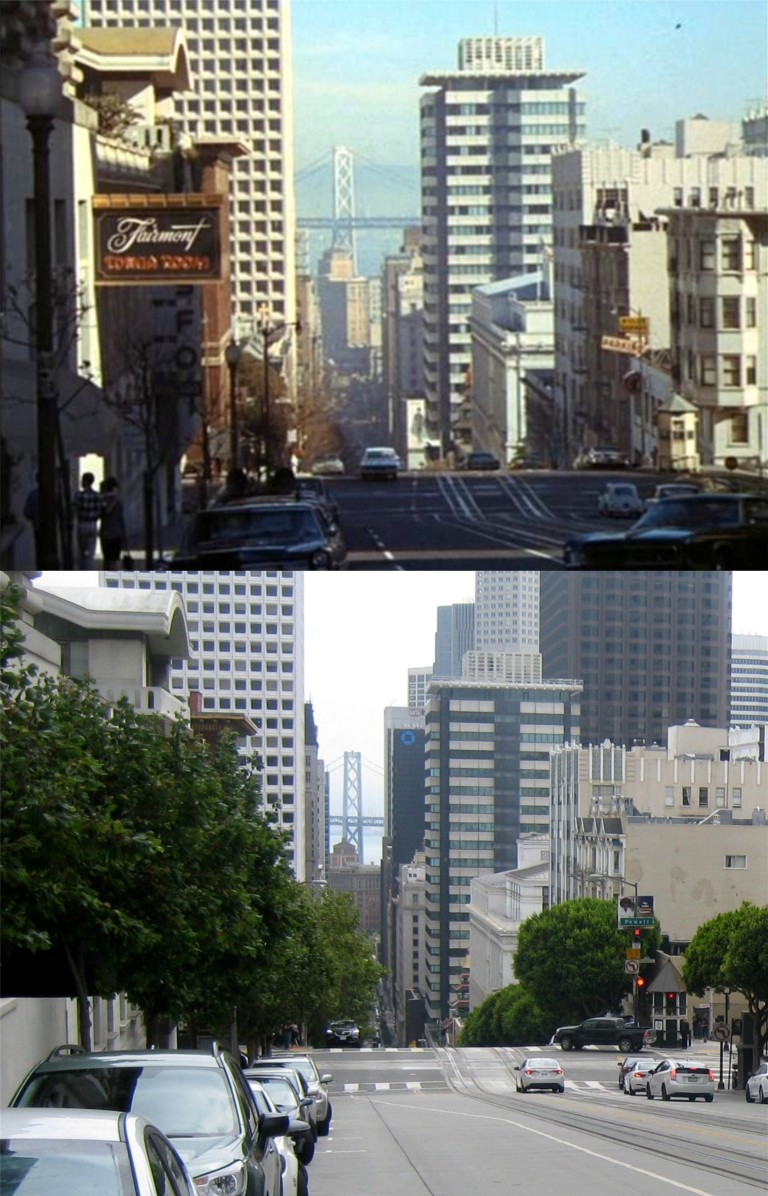 In a 1968 episode of the television show ‘Ironside’ starring Raymond Burr, the Crest Garage had by then become a parking garage. My picture of the garage behind the cable car signal box taken in August of 2017 was the last picture I took of the building.

The oldest picture I’ve seen of the Crest Garage dating from the 1920’s; I’m not sure but it might be from the Shorpy Picture Archive. The bottom photo is all that’s left of the garage today. You can see the imprint of where the Crest Garage leaned against the old Apartment building on California Street since the 1920’s.