Well, Dianne hasn’t, actually, bumped anybody off, but that’s just because she hasn’t got around to it yet.

The following collections are of more San Francisco crime images both real and from the movies. This remarkable 1927 shot was taken during an actual bank robbery in progress at the French American Bank on Hayes at Octavia.

In February of 1974 when Patty Hearst was kidnapped by the Symbionese Liberation Army, much of the sympathy and hope for her safety disappeared when this surveillance video of her helping to rob the Hibernia Bank at 22nd and Noriega in April of 1974 stunned the country. Of the five SLA members robbing the bank all, but Patty Hearst died in a fiery police shootout the following month in Los Angeles. Miraculously, Hearst was shopping and not a the safehouse when police raided it and killed all seven members of the SLA in the house that day. At the right is Natasha Richardson, who portrayed Hearst in the 1988 film ‘Patty’ reenacting the robbery. Sadly, Natasha Richardson died as the result of a skiing accident in 2009. Click on the link below to see the famous footage of the robbery.

The bank building robbed by the Patty Hearst and company at 22nd and Noriega today, seen from the outside and inside where the robbery took place.

Theodore Durant, the “Demon in the Belfry”, was a creep who, in 1895, murdered two woman, Blanche Lamont, and Minnie Williams, on two separate occasions in the Emmanuel Baptist Church on Bartlett Street in the Mission District between 22nd and 23rd, where he worked as a supervisor, and he wasn’t, particularly tidy about his killings, mutilating the bodies. He was hanged at San Quentin in 1898. Blanche Lamont’s body was found up in the spire, and Minnie Williams was found directly below at ground level in the library. Durrant approached the church from 22nd St. to the left of the church with Blanche Lamont on April 3rd 1895, and from 23rd St to the right of the church with Minnie Williams, on April 12th 1895, and was observed by many of the neighbors on Bartlett Street. His stroll with Lamont was amicable, and pleasant, but there is evidence that Minnie Williams might have known about the fate of Blanche Lamont as they argued loudly at the door of the church, and were reproached by a passerby. Also, she was reported to have said to a friend in Alameda, “I know too much about the disappearance of Blanche.” 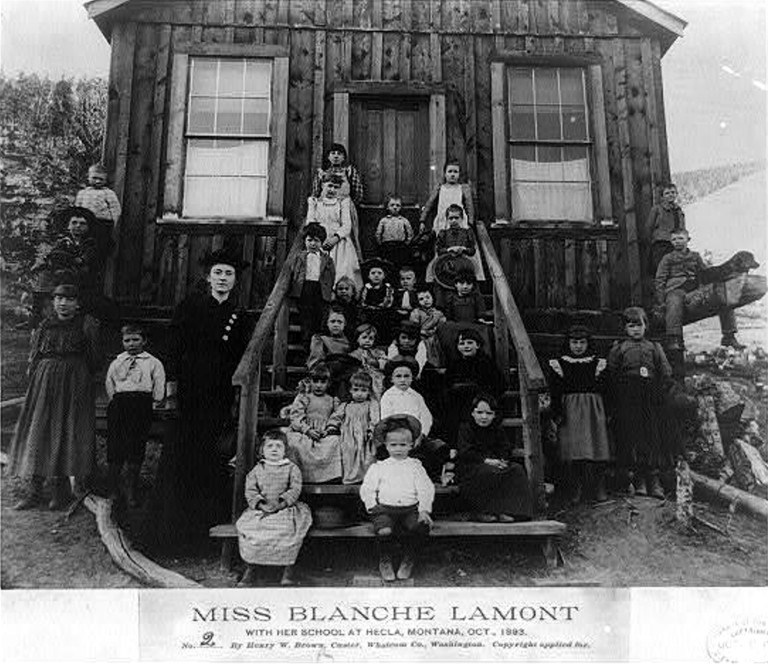 Blanch Lamont (left of the stairs) with her students in Montana, where she came from two years before the murders. 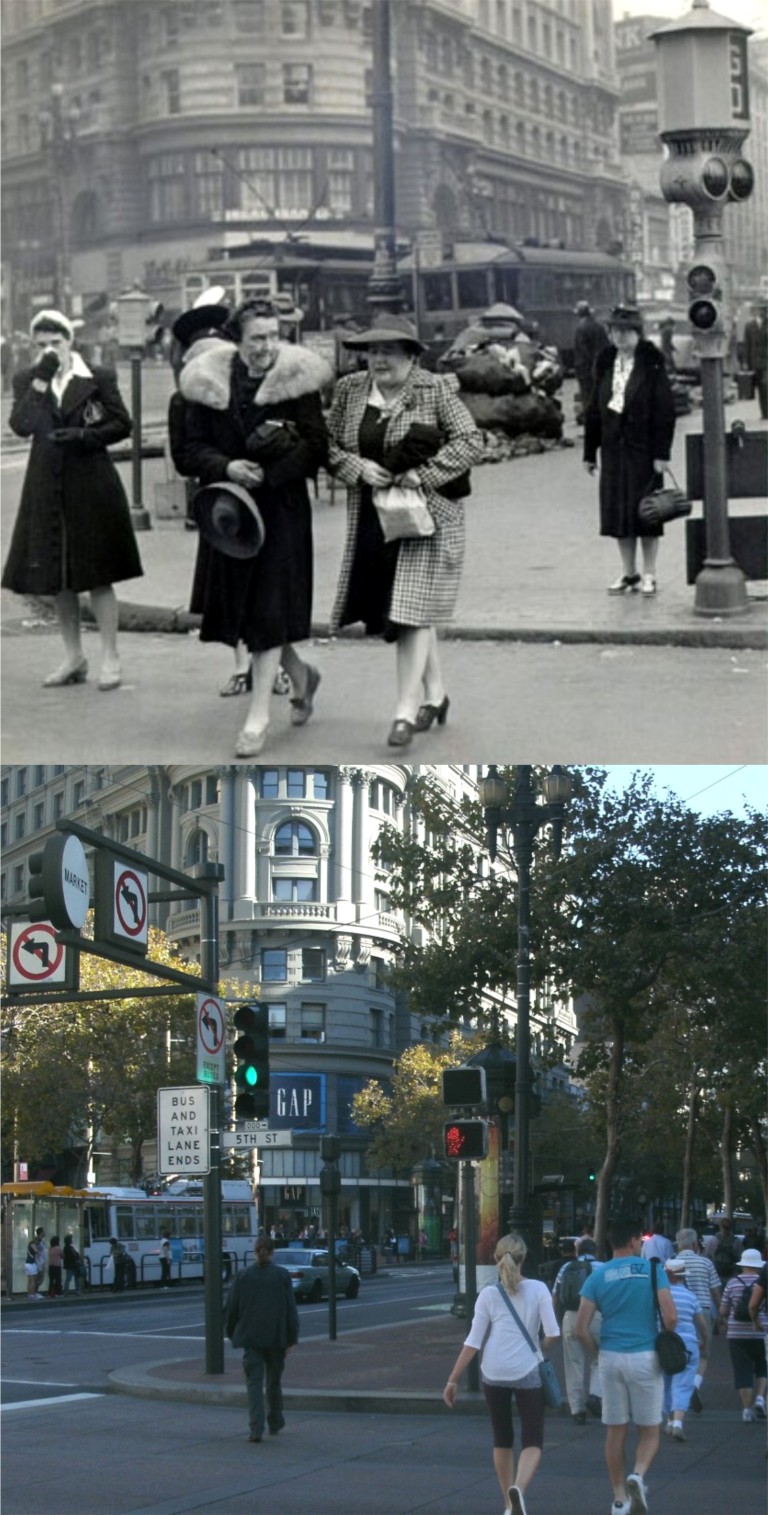 San Francisco crime at it’s most loathsome; ladies jaywalking at Fifth and Market Streets in the 1940’s. 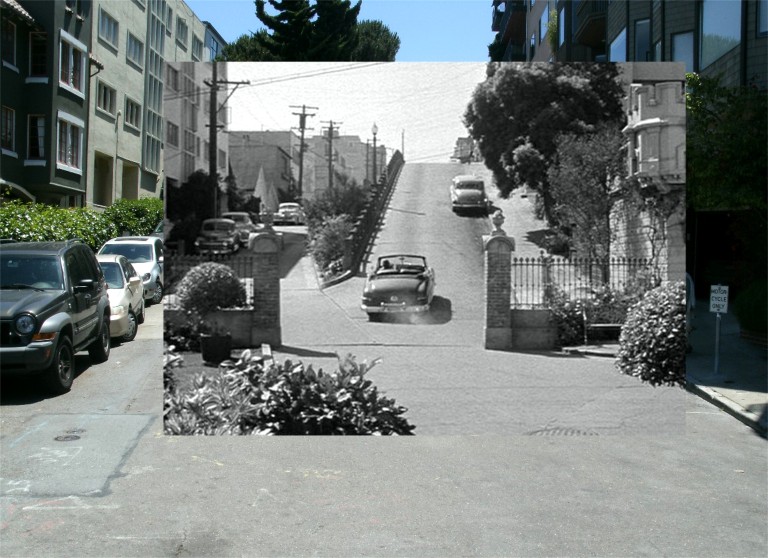 In a film overlap from the 1951 movie ‘House on Telegraph Hill’, Valentina Cortese leaves her house and heads up Montgomery Street unaware that her brakes have been tampered with by her husband, Richard Basehart.

Valentina Cortese’s car crashes at the corner of Montague and Montgomery, but she survives. 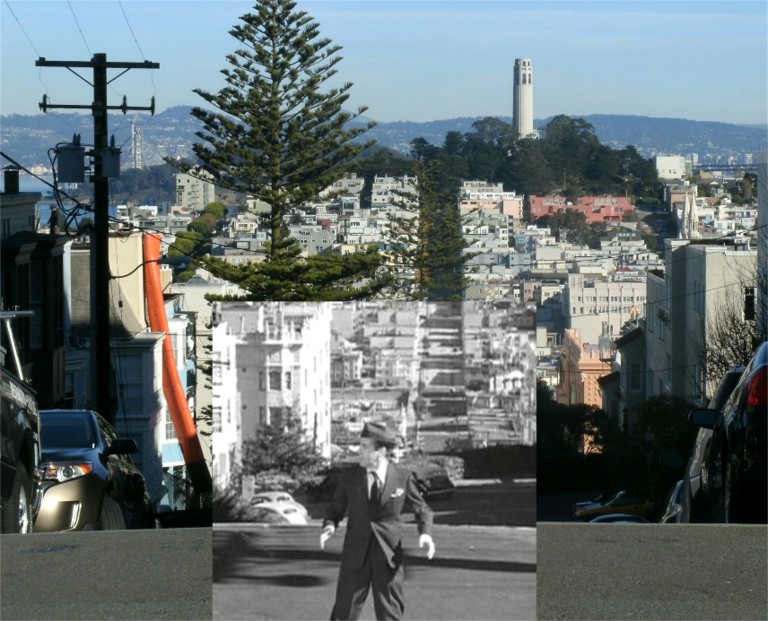 In a film overlap, Humphrey Bogart catches a cable car at Greenwich and Hyde after accidentally killing Agnes Moorehead in the 1947 movie ‘Dark Passage’. Well, it was an accident, so I guess it really doesn’t constitute a crime, but that won’t matter to the cops.

Thrill killer, Penny Bjorkland, shot a man to death just for the fun of it in 1959 and threw the gun down a storm drain on the corner of Camellia and Castle Manor in the Excelsior District. Check out the link below that follows a terrible poem, whose author must remain anonymous, for her story. 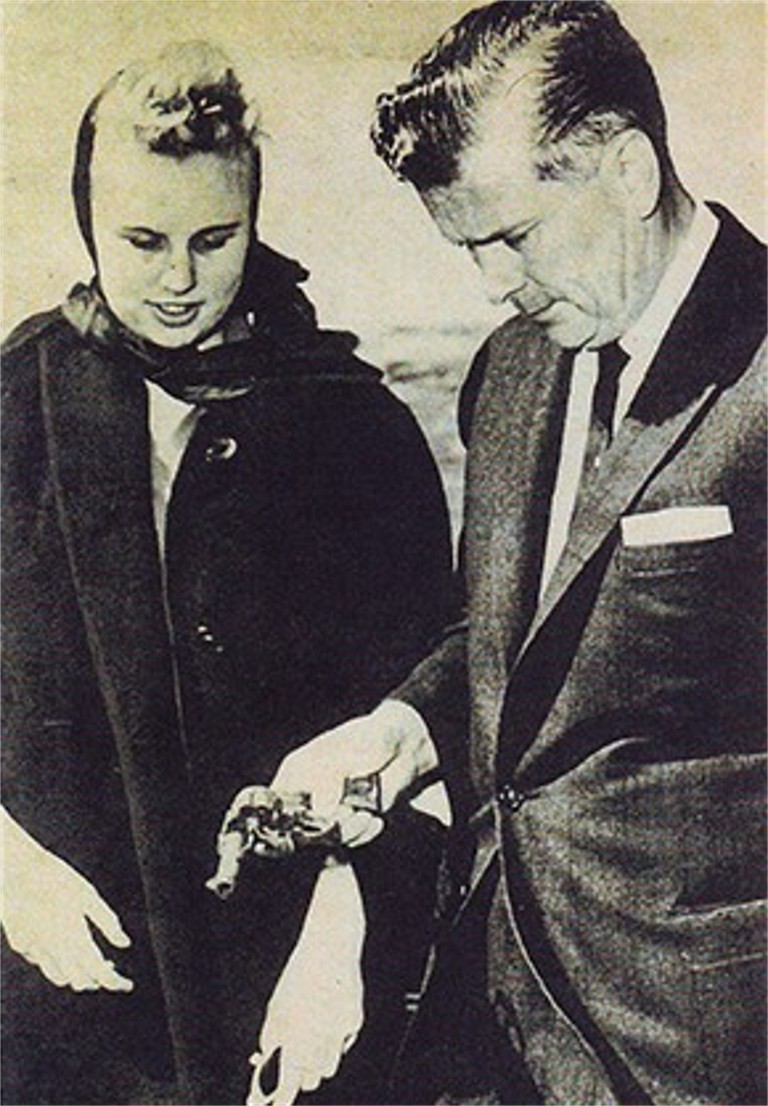 Bjorkland reenacts the murder for police at the murder site with the gun she threw down the drain. (Bob Calhoun)

I knew I couldn’t stay away.
I had to find that drain.
I left for BART one Saturday,
and went there on a train.

A lady stopped from a near bus line
I said to her, “Good day!”
She knew of Penny “Bjorkenstein”.
She told me, “Go away!”

She asked me why I came here.
I said I had to do it!
She whispered with an evil leer,
“Shhh….. That’s where I threw it.” 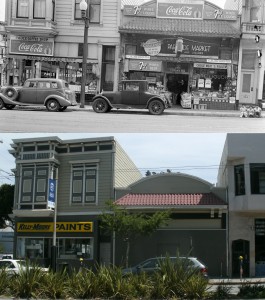 Divisadero and Oak Streets in the 1930’s. This picture reeks of the Great Depression right down to the Relief Stamps Redeemed sign!

“Tanks!” “You’re welcome!” Alright, I stole that from Chico Marx. Here at Pier 1, an army tank is ready to move against the striking dock workers during the 1934 labor crisis.

These two images are of the Powell Street Cable Car from both sides of the street as it climbs Nob Hill in the 1940’s.