In 1939 my 17 year old mother took a train out to San Francisco from Grand Forks North Dakota, and spent that summer there. She left behind some vintage photographs of the City back then. She fell in love with San Francisco, and came back to the area to live after marrying and starting a family. She died in 2006, (Darn! Didn’t get to see her Giants that she loved so much, win three World Series) and although I was born in North Dakota as well, my love of San Francisco was, undoubtedly, inherited from her. Here are some of the pictures she kept from that summer. 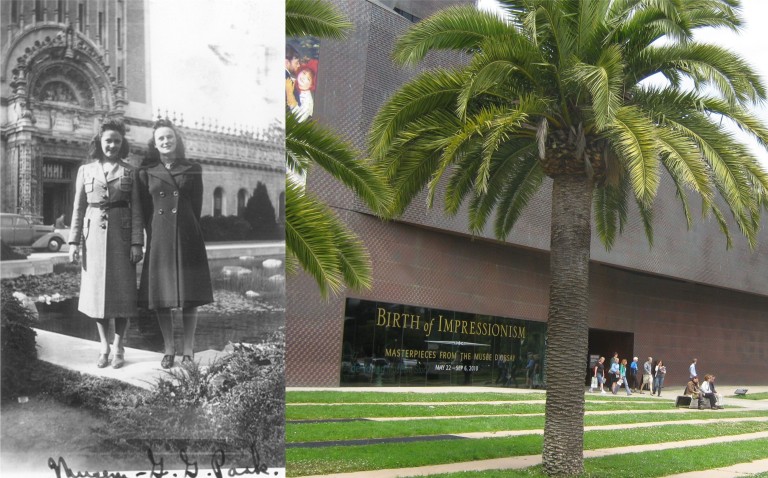 My mom (on the right) is with her cousin Frances, who she stayed with, at the old De Young Museum in Golden Gate Park. The new museum opened here in 2005.

Here my mom on the left is on the porch with Frances at the house where she stayed on Anza Street. It’s nice to see that the same door is still there. I think “Foo” was mom’s nickname for herself, but I’m not sure what mom’s calling Frances. I don’t know what became of Frances; I remember in the 1990’s, mom trying to get in touch with her but she was never able to locate her again.

Here they are at Joe DiMaggio’s Restaurant in Fisherman’s Wharf. Love that holding hands bit! DiMaggio’s is now called “Joe’s”. 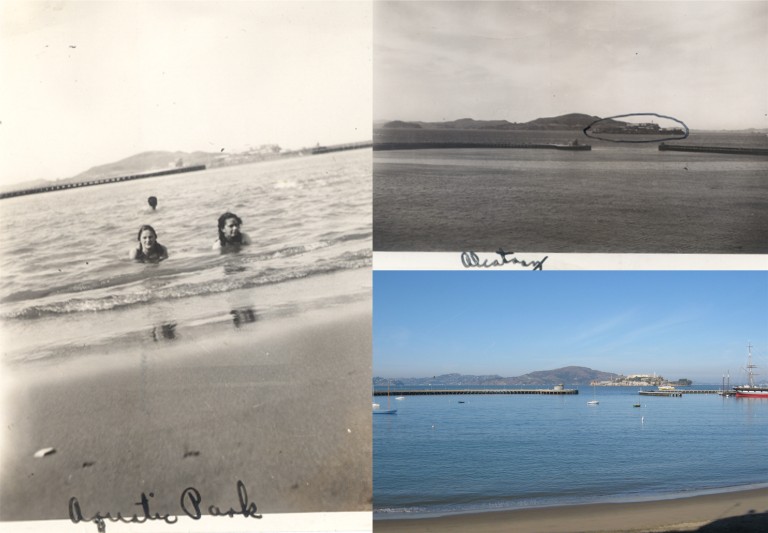 Mom, on the left with Frances, swimming at Aquatic, and a picture of Alcatraz they took from there: 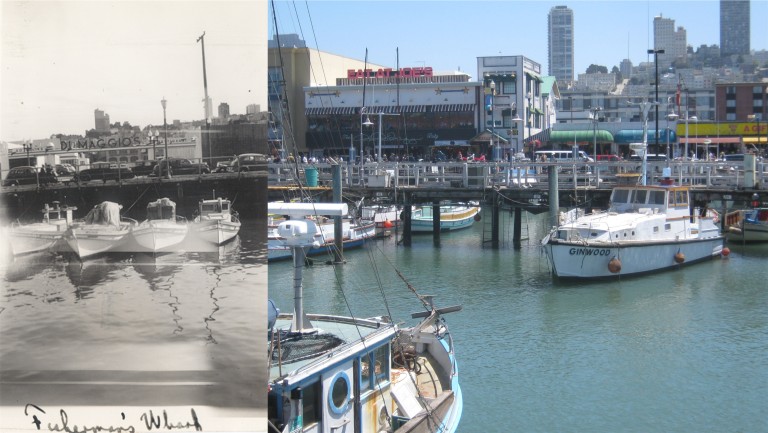 DiMaggio’s again from the Fisherman’s Wharf Lagoon. I think my mom had a thing for DiMaggio; if he’d have married her instead of Marilyn, I might have been a great ball player!

I’d know where this is even without my mom, photo left of Frances, identifying it!

At the old Sloat Blvd entrance to what used to be called Fleishhacker’s Zoo, (You spelled it wrong, Mom!) now just called the San Francisco Zoo. This entrance is now closed off.

Swimming with Frances in, what was then the largest swimming pool in the world, Fleishhacker’s Pool. The pool has been buried over, and is under the parking lot where the zoo’s main entrance is today.

I remember my mother telling me how wonderful the old pool house was to visit, and of the steak house that used to be upstairs. Here is a picture of the old pool house when the pool closed in 1971. It remained here for over 40 years after closing before homeless people burned it down in 2012. Now, only the entrance where my mom and her cousin Frances went in and out of on that summer long ago remains.

Marilyn Monroe and Joe DiMaggio leave the McAllister Street side of the City Hall Building after their 1954 wedding. She looks so happy!

In 1902, “Buffalo” Bill Cody himself visited San Francisco. I’m sure they wisely kept him out of Golden Gate Park so he wouldn’t kill the few buffalo that they raise there. Here he is at the old Cliff House. My dog ‘Danny’ seems to have picked up his long ago scent, or maybe that of his horse.

Saint Mary of the Assumption Church on the corner of Van Ness and O’Farrell was built in 1891, and destroyed by an arsonist fire September 6th 1962. A new Saint Mary’s was built to block west on Gough. The KRON TV Building now occupies this spot. In 1903 President Teddy Roosevelt visited San Francisco, and gave a parade past this location at Van Ness and O’Farrell to review all of the schoolchildren in San Francisco. A remarkable piece of film exists showing Teddy standing in his carriage passing the church at this spot. Click on the link here, and go to full screen for the best effect.

The fellow who runs the film museum in Niles CA was on ’60 Minutes’ last summer doing a segment concerning this historic piece of film. Although, originally thought to be filmed in 1905, he believes, with ample evidence, that it was shot in April 1906, just a few days before the 1906 Earthquake and Fire. That being the case, most of these buildings and, no doubt, a lot of these people were running out of time. Click on the link below the photos to see the film. It’s an incredible piece of history to watch, and some of the rudest drivers I’ve ever seen! Sound effects have been added to this version. 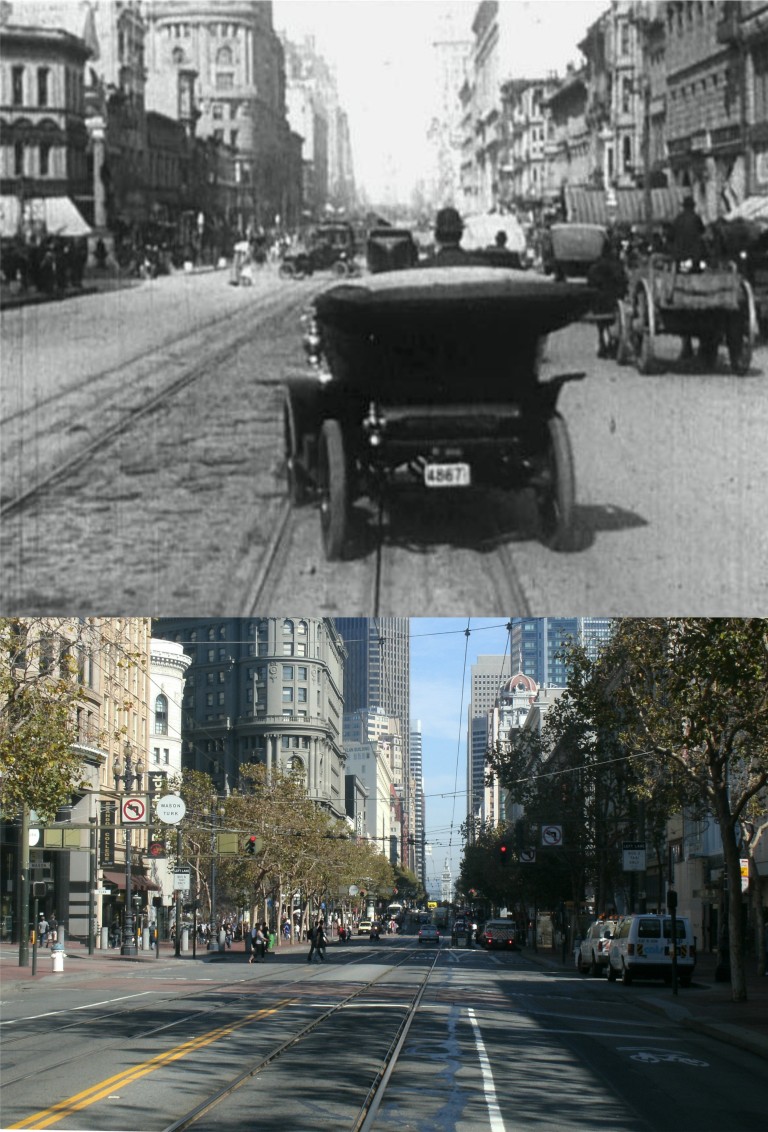 We’ll begin at 5th and Market. Keep your eye on that fellow with license plate #4867. The building at left center is the Flood Building, one of the few Market Street buildings to survive the 1906 earthquake.

This is 3rd and Market. No traffic cops or streetlights, just “Ready or not, here I come!” 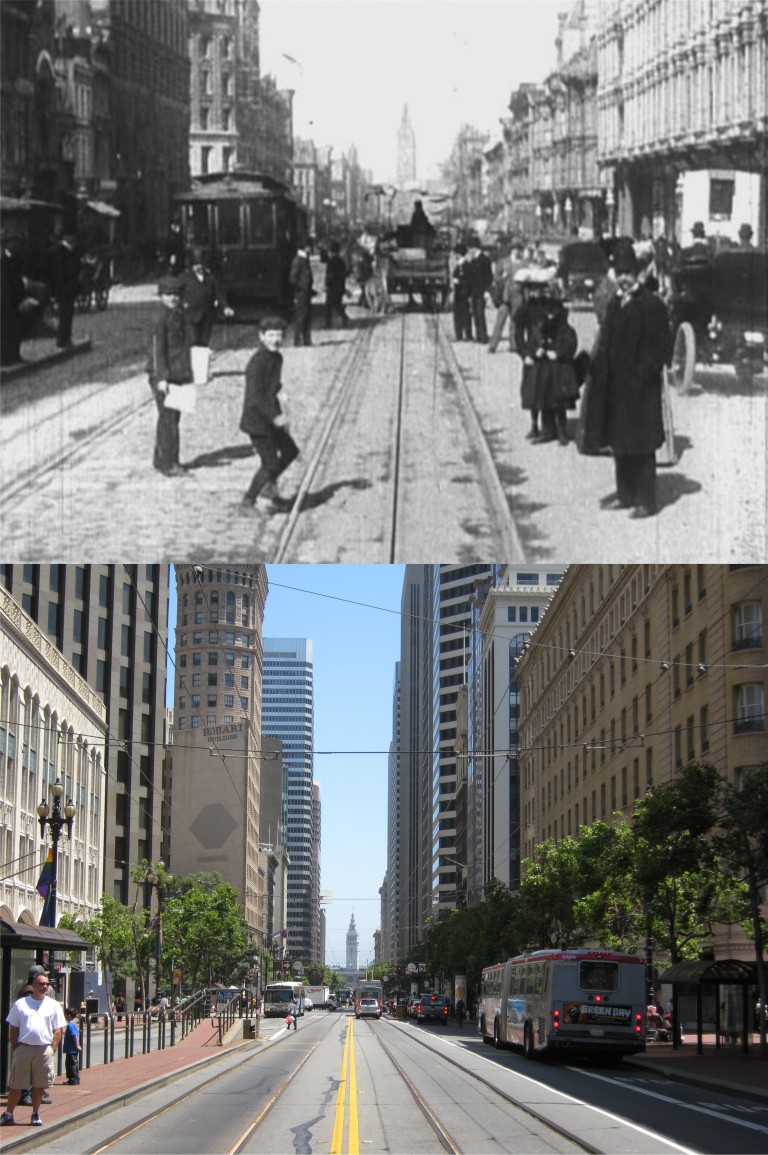 Newspaper row, in front of the old Palace hotel on the right: I love these unsupervised kids darting back and forth in front of the moving cable car. Almost like, “Oh Well, one less mouth to feed.” 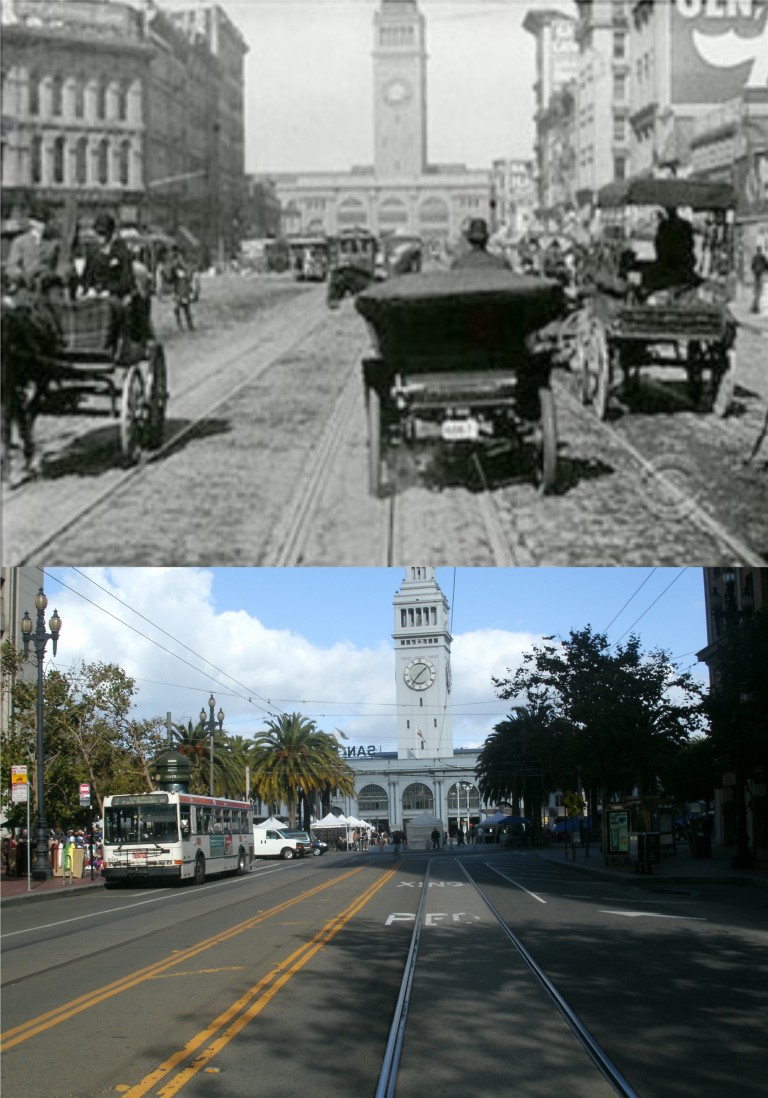 As we approach the Ferry Building, our little friend with license plate #4867 is back, almost running down a horse and buggy. Good thing we got his license number!

That daredevil darting in between the moving cable cars works for ‘The People’s Express Company.’ Just the driver to put in charge of your fragile or priceless items!

‘A Trip Down Market Street’ ends at the Ferry Building among dapper gentlemen, a couple of nuns, and one very bored looking Victorian maiden.

The Fisherman’s Wharf Lagoon before Alioto’s. Those are the masts of the 1886 ship the Balclutha, now on display at the Hyde Street Pier.

Fisherman’s Wharf in the 1950’s Click on the link here for a wonderful 1950’s color film tour of, just about, all of San Francisco!  (Thumbnail image)

The 1936 film ‘San Francisco’ starring Clark Gable, Spencer Tracy, and Jeanette MacDonald, opens up on New Year’s Eve 1905, three and a half months before the April 18th 1906 Earthquake, with champagne being served to the public out of the famous Lotta’s Fountain on Market Street. They did a pretty good job at creating a replica for the fountain! (Thumbnail image)