These are images of places and things from a past era in San Francisco, gone forever. Unlike ghosts, they’re not coming back. 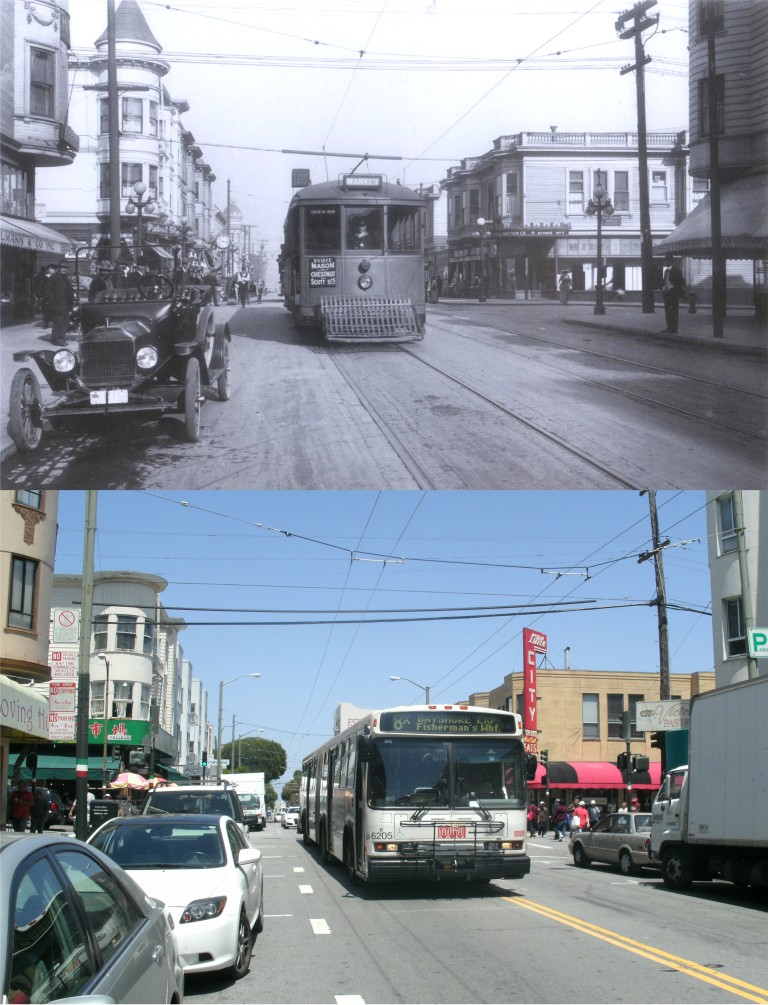 The old and beautiful streetcars that rumbled their way through town like this one at Stockton and Vallejo Streets in 1916. All four buildings on each corner of this intersection in 1916 are still there. (Vintage picture, Charles Smallwood)

The old 1939 Transbay Terminal on Mission Street: And what did San Francisco get to replace it, a beautiful new Transbay Terminal that’s been closed for almost eight months as of this writing because of engineering blunders. There are a lot of theories about why that happened, but none them make any sense to me. (SFMTA) 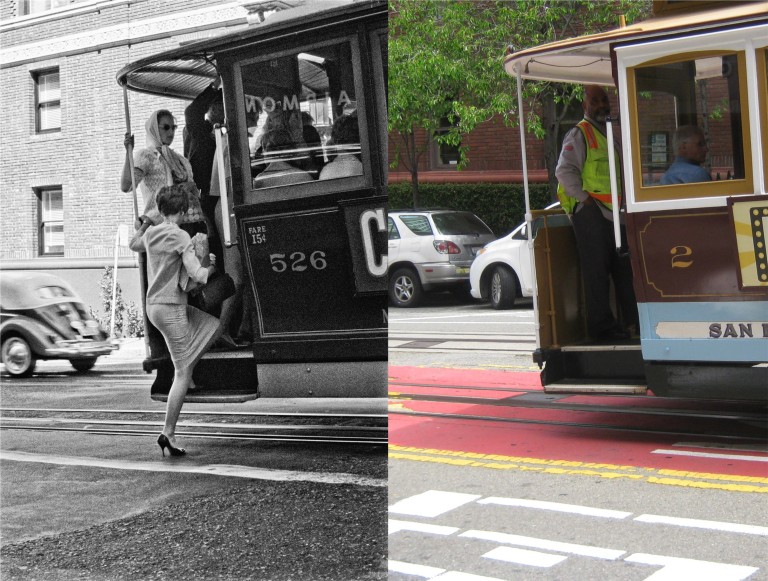 15 cents cable car rides: Powell Street at California in the 1960s: I hope she got everything she has on there! They don’t let passengers climb on the back of the car here anymore. (Fred Lyon) 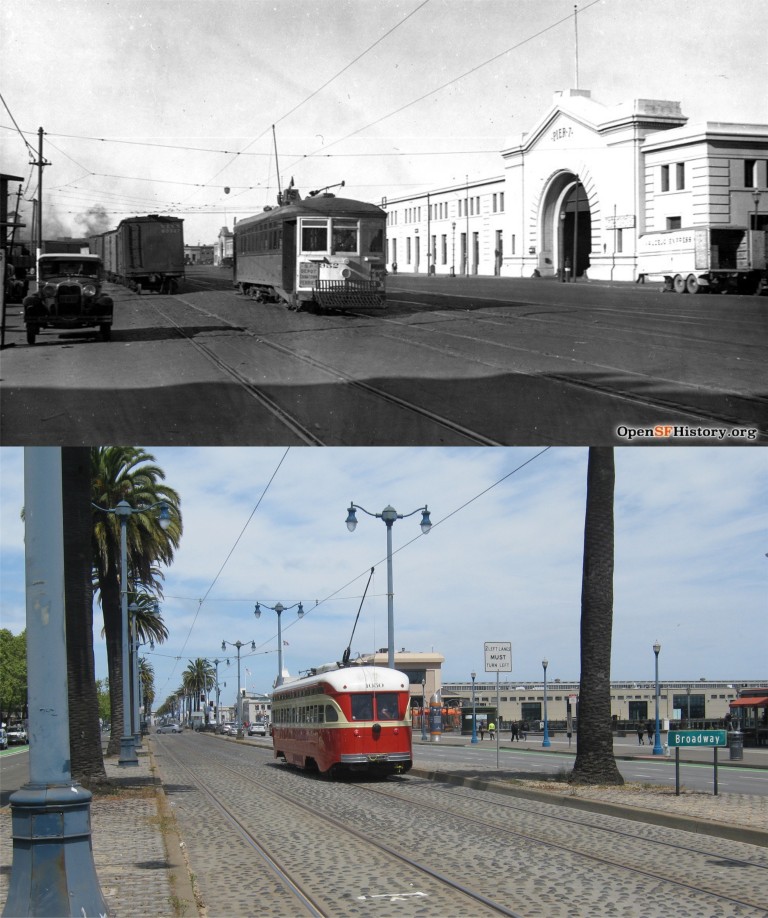 Pier 7 at the foot of Broadway: Demolished by the 1980s, it’s now a walking pier. (Opensfhistory.org)

In the 2014 version of the movie ‘Godzilla’, the monster leaves San Francisco past Pier 7 after destroying most of the city. 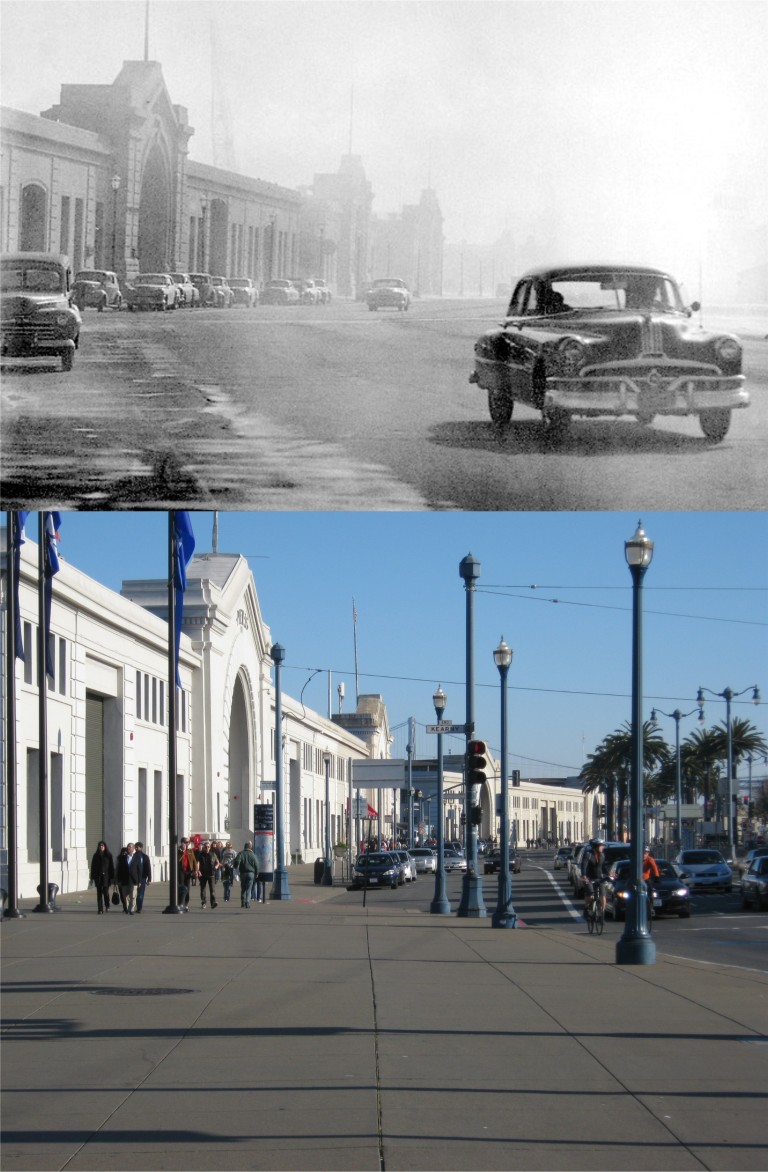 That combination of fog, cars, and the Embarcadero that made San Francisco a perfect setting for a film noir movie: (Fred Lyon)

The small snack bar in Dolores Park where Roman Rodriguez strangled Hilda Pagan in 1952: In the vintage photo from Hannah Clayborn’s ‘Historic Photos of San Francisco Crime’ police question Rodriguez at the spot of the murder. When I took my picture several years ago the building where Rodriguez and Pagan met was still there, although a top portion had been added.

In 2015, the building where Hilde Pagan was murdered was demolished during the Dolores Park renovations.

Barnaby Conrad on the left and Herb Caen bowling with booze bottles on the sidewalk in front of El Matador in the late 1950s:  (Maxminimus.blogspot.com)

Some say that the magic of San Francisco is gone. I suppose there may be some truth in this. Maybe it left with Herb Caen; or possibly Barnaby Conrad, who died in 2013. Conrad’s El Matador Nightclub on the southeast corner of Broadway and Kearney Street has to rank right up alongside places like the Trocadero or Ciro’s in Hollywood for the number of celebrities who visited there. The years from when he opened his club in 1952 until it closed in the middle of the 1960s has to be the most glamorous period in San Francisco history. The array of the famous who visited his nightclub is almost unbelievable!  Here’s some of the people who came to El Matador: John Steinbeck, Ava Gardner, David Niven, Danny Kaye, Alex Haley, Orson Welles, Maurice Chevalier, Truman Capote, Duke Ellington, Ricardo Montalban, Sterling Hayden, Erskine Caldwell, Lenny Bruce, Richard Burton, Lena Horne, Jack Kerouac, Jonathan Winters, Lucille Ball, Frank Sinatra, Mary, Pickford, Rita Hayworth, Jimmy Stewart, Hedy, Lamarr, Robert Mitchum, Vivien Leigh, Bing Crosby, Gary Cooper, John Wayne, and Marilyn, Monroe. Can you imagine that? (Source: Barnaby Conrad’s ‘Name Dropping’)

This is an update to a picture that I originally included in the post. A viewer named ‘Sleuth’ wrote in a comment to this post that the location of my original picture was not the actual location where El Matador was, but the nightclub was across Broadway on the north side of the street where the sports bar is today. Sleuth was correct and I thank him or her for pointing out my error.

3 thoughts on “Gone for good (For Elainna)”