“Get your walking shoes on, folks. Today we’re going to take a tour that travels through and skirts along the edge of the Tenderloin.”

We’ll start at the corner of Turk and Mason Streets; and where else could you hope for a tour to start? The vintage picture is from 1955. All vintage pictures in this post are from the San Francisco Pictures blog and the SFMTA Photo Archives. In the far back is Nob Hill with the Mark Hopkins Hotel, looking like another world from where we’re at.  We’ll pass the vagrants on the Turk Street sidewalks as quietly as possible and head over to Turk and Leavenworth Streets. 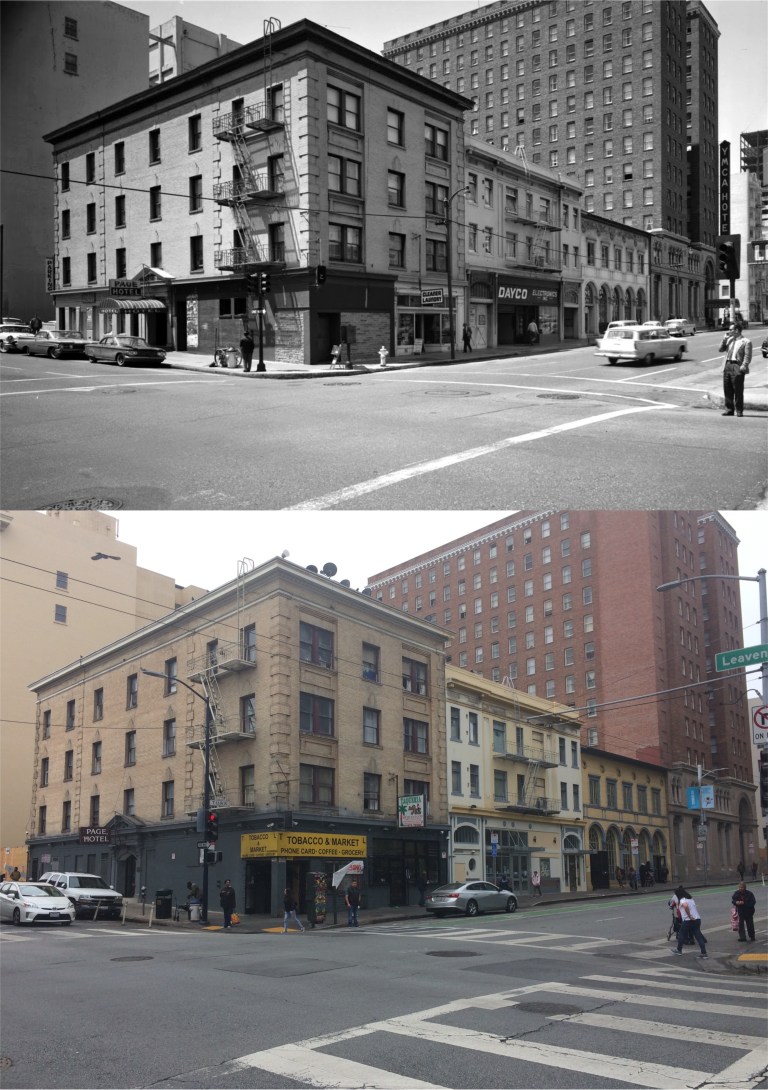 Turk and Leavenworth Streets in the heart of the Tenderloin, seen in the vintage photo in 1962: I got you into this and I’ll get you out. We’ll walk two blocks west on Turk to Larkin Streets and catch Muni #19 to Sutter Street. Unfortunately, it will be two of the most uncomfortable blocks you’ll ever experience in San Francisco.

Sutter Street at Polk Street looking east in 1931: From here on in you’re going to find that a remarkable number of buildings in the vintage pictures are still around.

One block east of the previous picture at Sutter and Larkin Streets, seen in 1931: They were doing a lot of work on Sutter Street that year.

We’ll move over to Geary Blvd. at Jones Street, seen in 1957. Geary Blvd. used to be considered the northern border of the Tenderloin, but I don’t know if that’s accurate anymore. They’re still selling Mexican food and booze in the same two places they were in 1957. 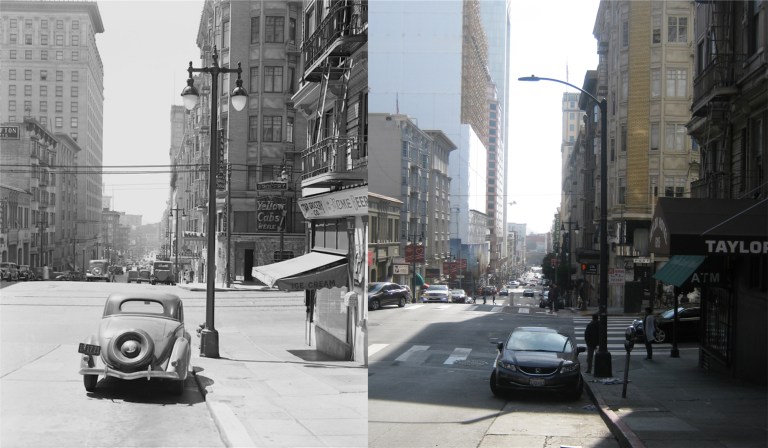 One block east and one block north and we’re at Taylor and Post Streets looking south down Taylor. The vintage picture is from 1937 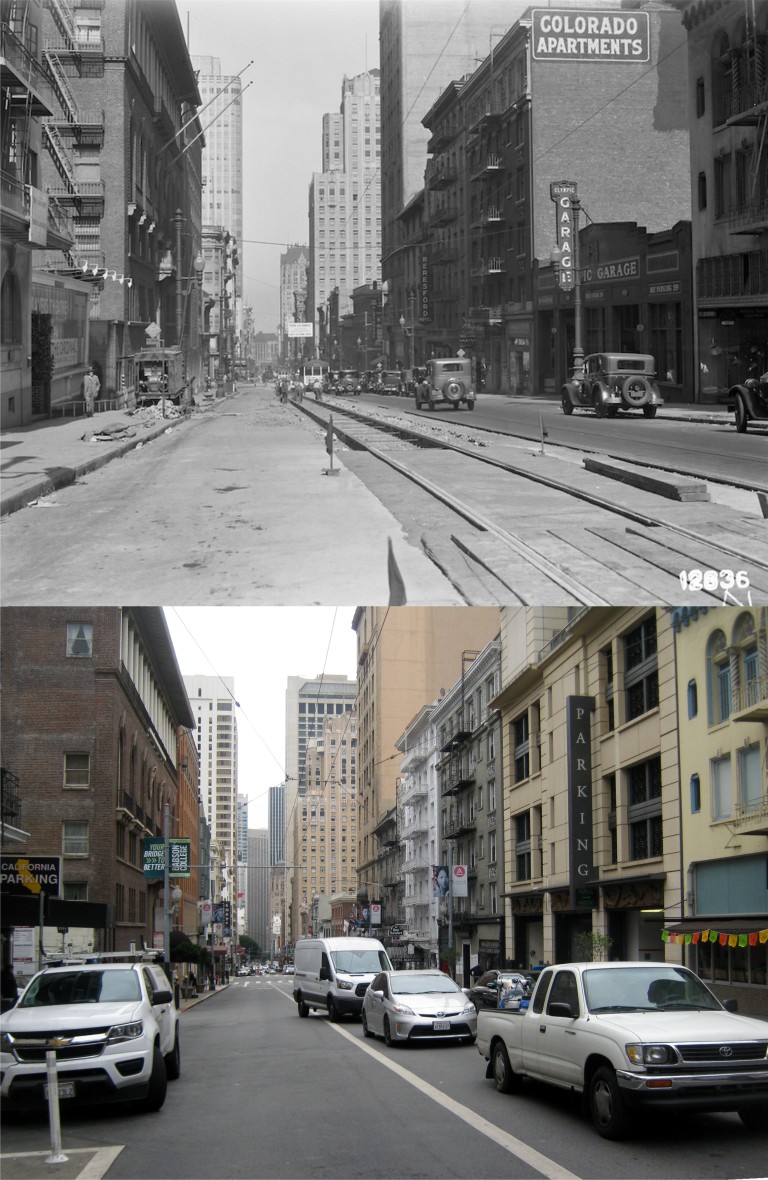 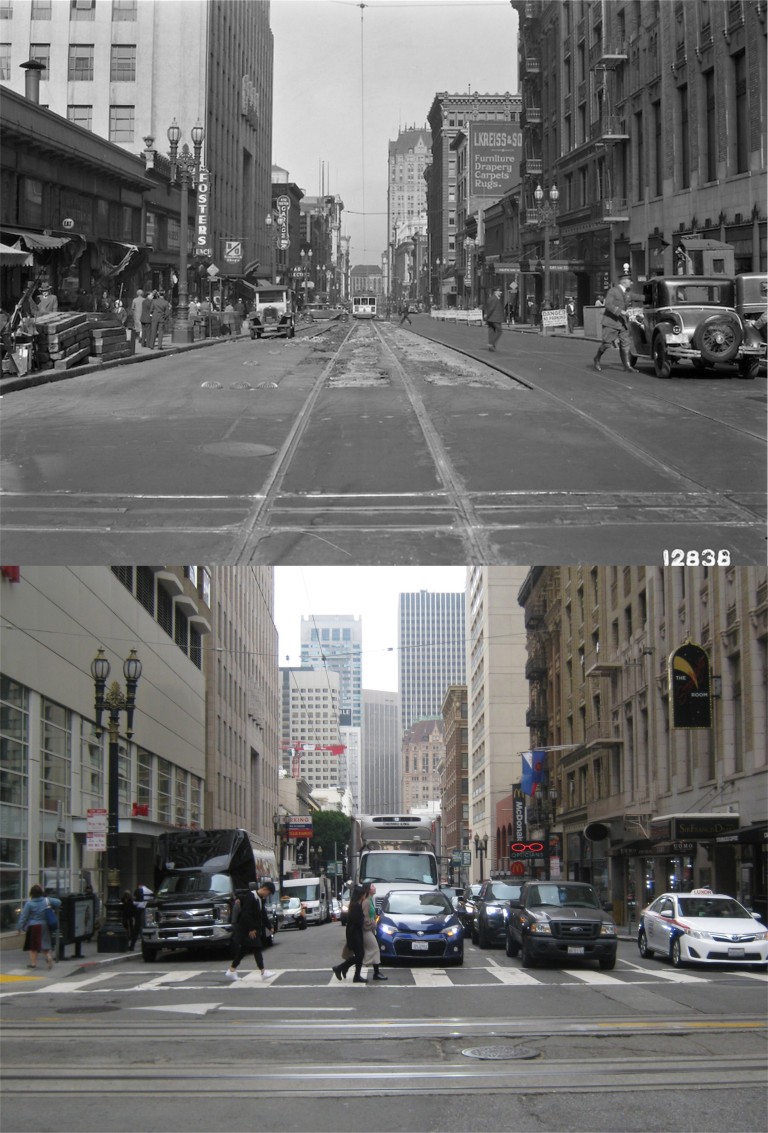 From the Taylor and Sutter Street intersection we’ll head two blocks east to Sutter and Powell Streets, looking east down Sutter in 1931: When you get to here you’re out of the Tenderloin, but you’ll often think back about that area with a definite…… viewpoint. On the right in both photos is the Sir Francis Drake Hotel, and at left center is the 450 Sutter Building. 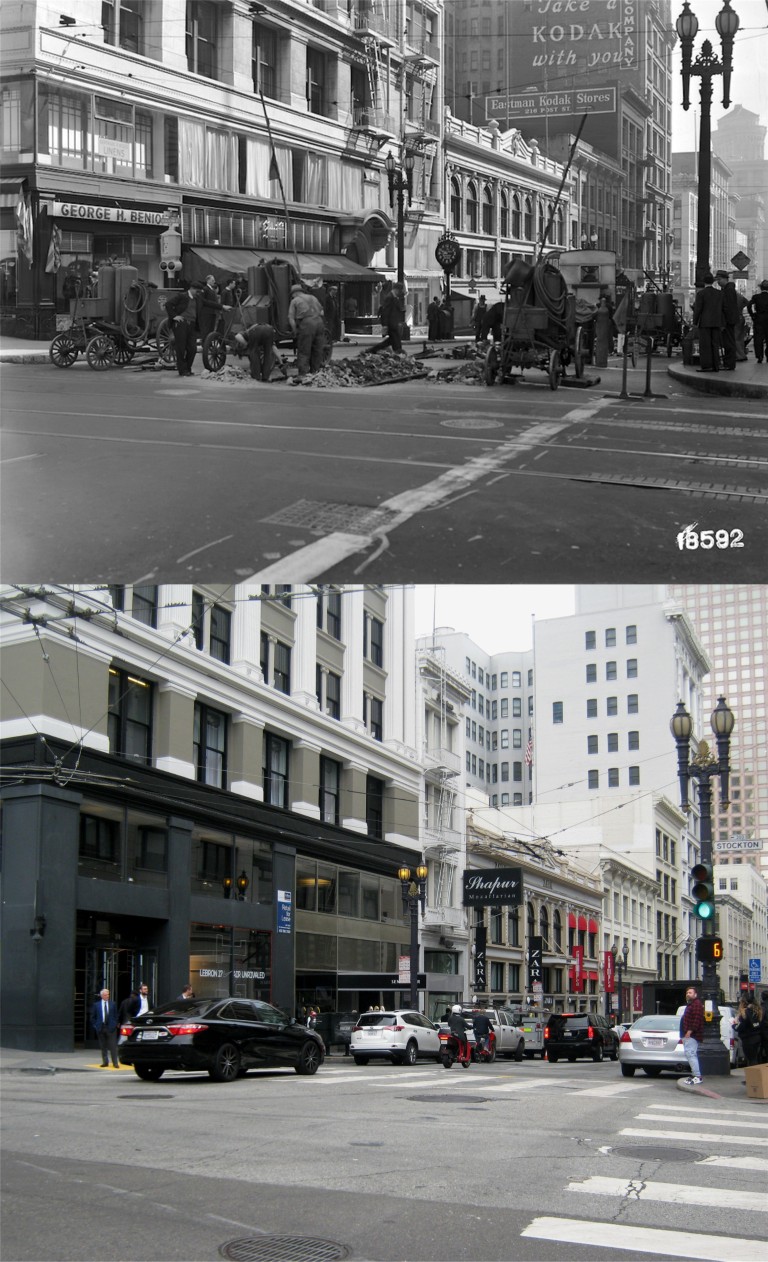 We’ll be closing the tour at Union Square. This is the northeast corner of the Square at Post and Stockton Streets in 1940. That’s some pretty antiquated construction equipment those guys are using.

This is at the southeast corner of Union Square looking down Geary Blvd. toward Market Street in 1951. Ah, the City of Paris Department Store; what a wonderful place that was until it was demolished in 1979. The Neiman Marcus Department Store is there now. This area is going to be ground central for “Black Friday” in less than two weeks. I’ve covered that hectic day for the past few years in posts on my blog, but I think this year I’ll just stay home and watch ‘Miracle on 34th Street’. If you enjoyed the tour, please be sure not to tell your friends; I don’t want to go through that again!

One thought on “Another one of those “different” tours of mine”