Like a lot of people, I started out taking pictures with a camera that used 110 cartridge film. In 1982 I bought my first camera that used 35 millimeter film; a little Canon snap shooter that I took pictures with off and on during the 80’s from Hawaii to Europe until it was either lost or stolen in Disneyland in 1991. In 1985 I bought a Minolta X700 that I still have today but never use anymore. These are 35 mm prints that I took in San Francisco from 1982 through 1985. I took a lot of slide pictures back then that I’ve posted images from in the past, but these are scans of developed prints from back then. 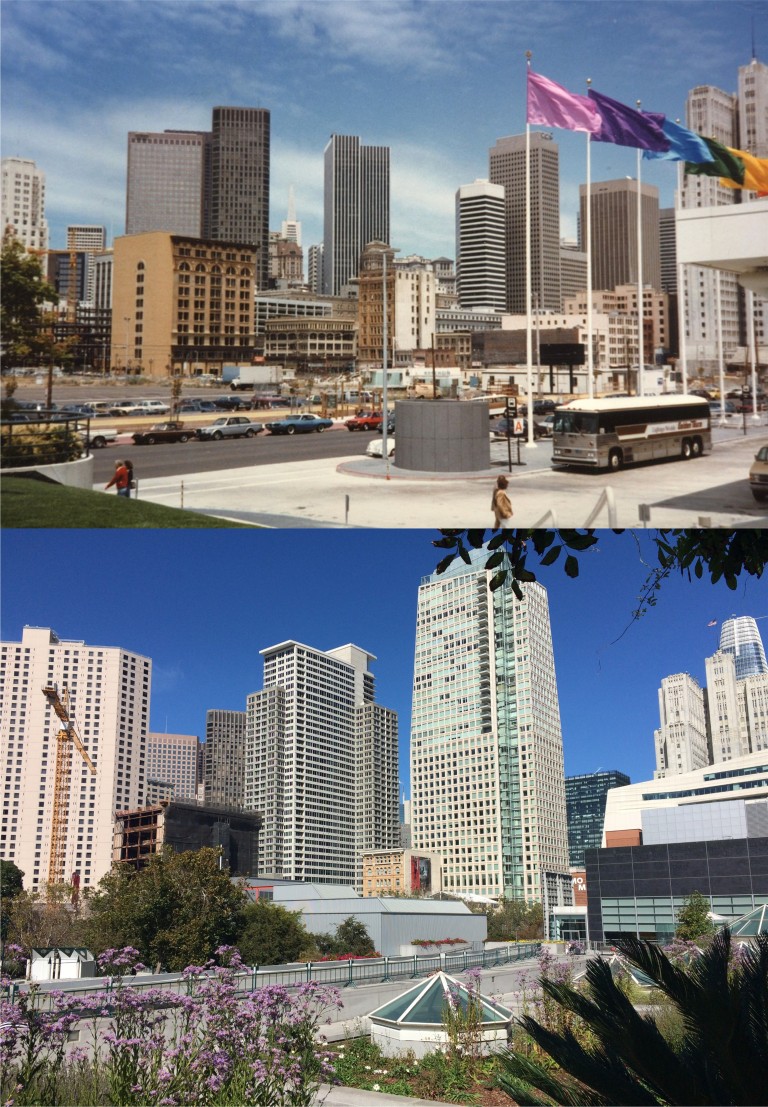 The view northeast from the Moscone Convention Center in April of 1982, before the Yerba Buena Gardens were built: This wasn’t too long after it opened. You could still see so many landmark buildings from here back then; the Hobart Building, the Call Building, the Hunter-Dulin Building where Sam Spade’s office was, the Transamerica Pyramid Building, to name a few. My current picture is as close as I can get to the same spot today. On the far right you can still see the west side of the old Pacific Telephone Building. The old building at 3rd and Mission on the left side is still there and having work done on it today. The One Montgomery Tower and the McKesson Corporation Building behind the building being remodeled are visible in both pictures. And, of course, the new bully in town, the Salesforce Tower is now on the far right. 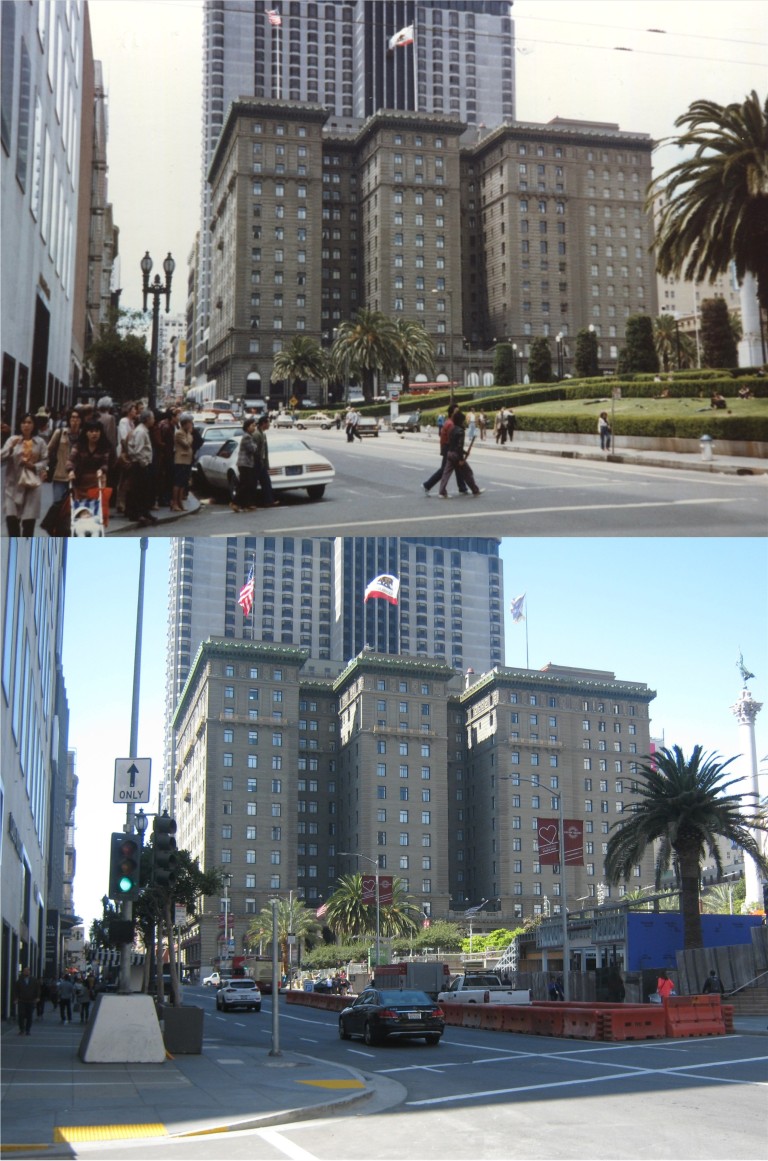 You can’t stand in the way of progress anymore than, as Daffy Duck would tell you, “you can’t bounce a meatball” but sometimes I wish they would have left Union Square, seen here in 1984, the way it was. 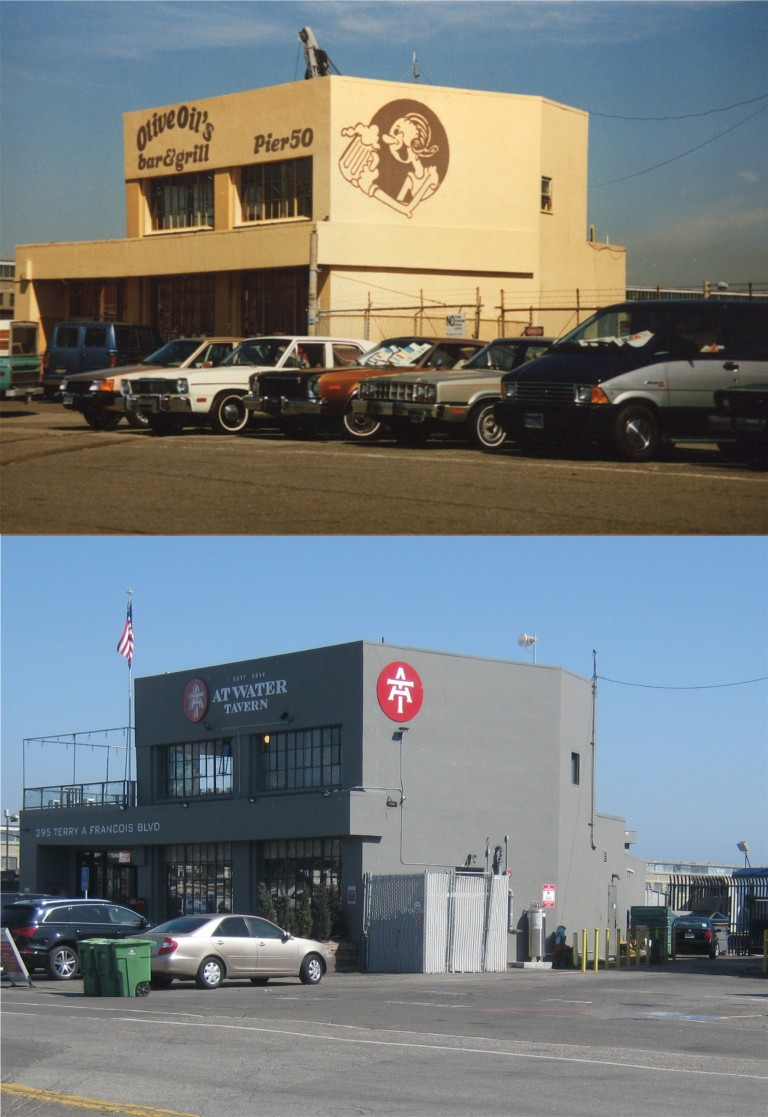 ‘Olive Oil’s’ at Pier 50 south of AT&T Park, probably around 1985: I wonder if I noticed back then that they spelled Olive Oyl wrong. 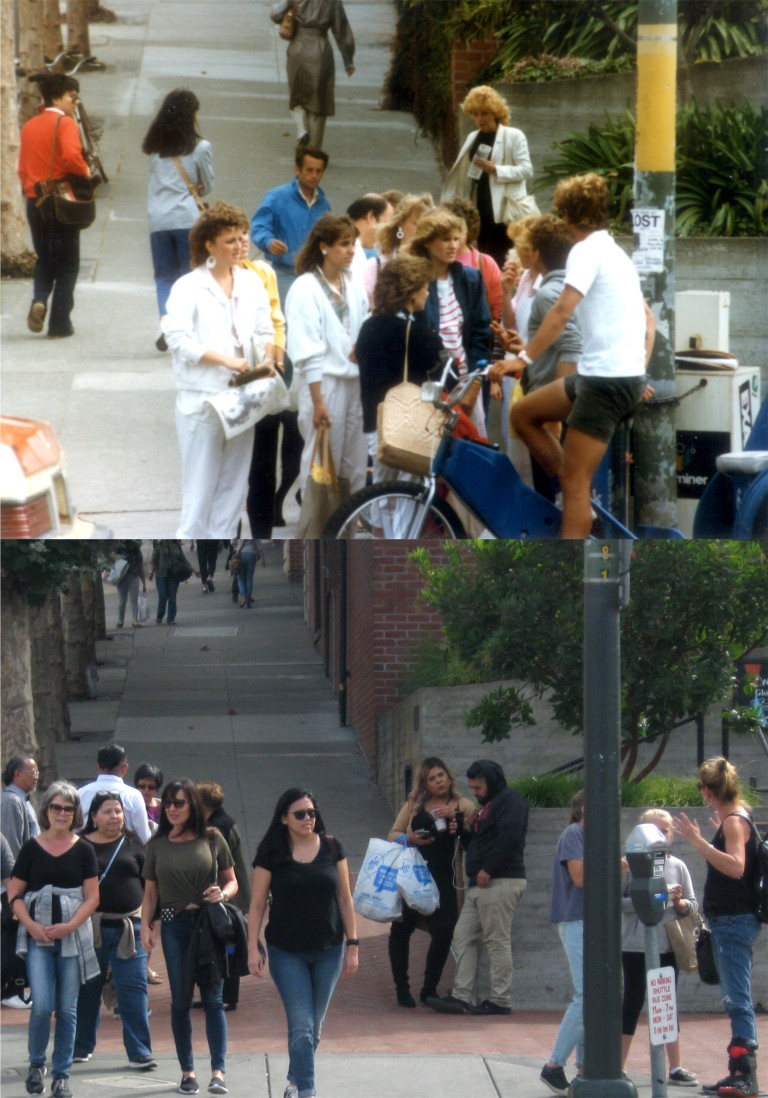 Girls on the southwest corner of Beach and Larkin Streets at Ghirardelli Square in 1985 and 2018: I remember I was testing out the zoom lens of the Minolta X700 camera I bought that year, and pretty girls are pretty girls! 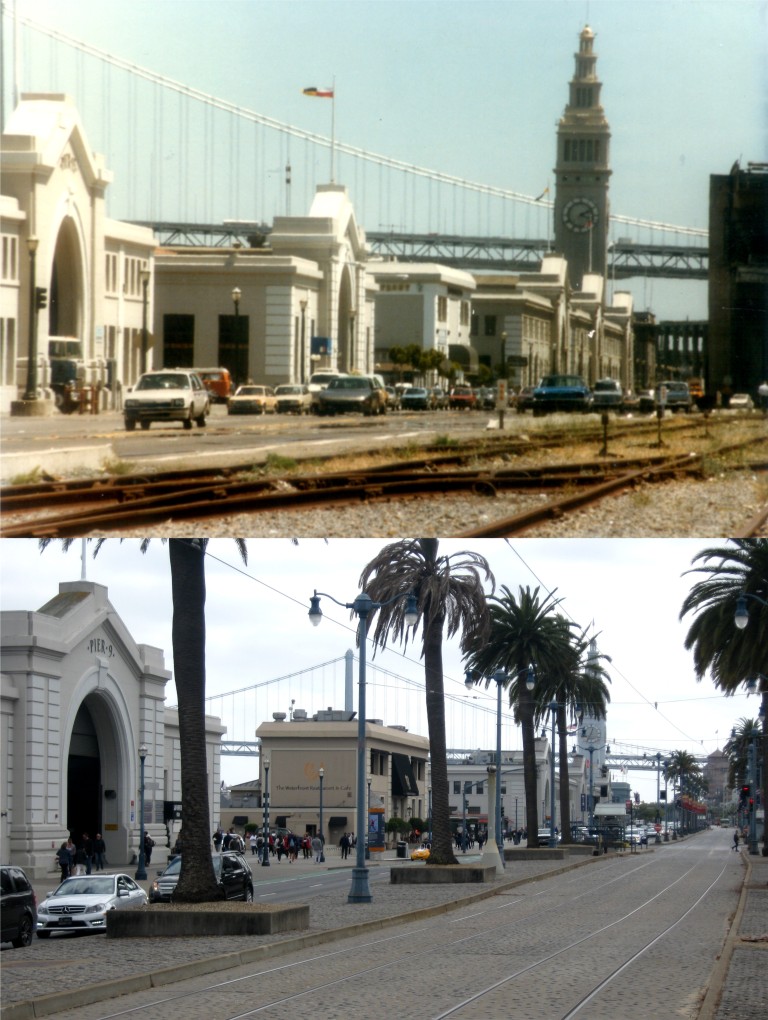 The Embarcadero at Broadway through my zoom lens in 1985: You can see part of the Embarcadero Freeway that ended at Broadway on the right. Those were the rusted and no longer used by 1985 Belt Line Railroad tracks. I’m a little bit closer to Pier 9 in the picture I took last week in order to get part of the Ferry Building in, and it was a lot sunnier on that long-ago day. 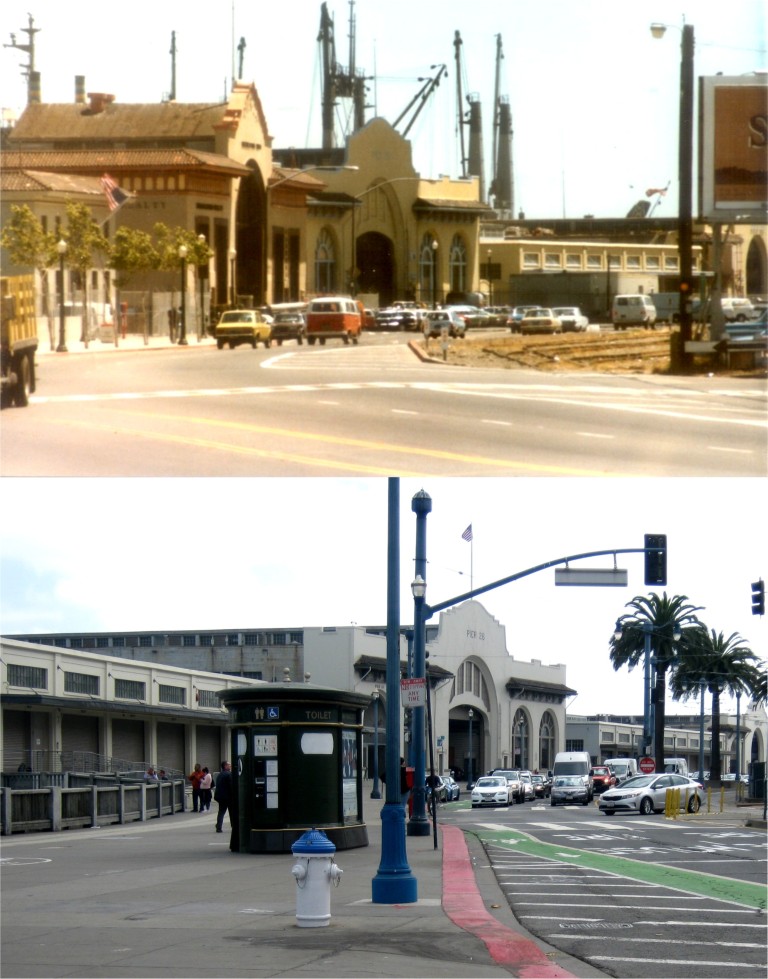 Piers 24 and 26 on the Embarcadero looking south toward the Bay Bridge in 1985: Pier 24 has been demolished now:

Pier 28, under the Bay Bridge, probably the same day in 1985 that I took the previous picture: You can see Red’s Java House on the right in both pictures. 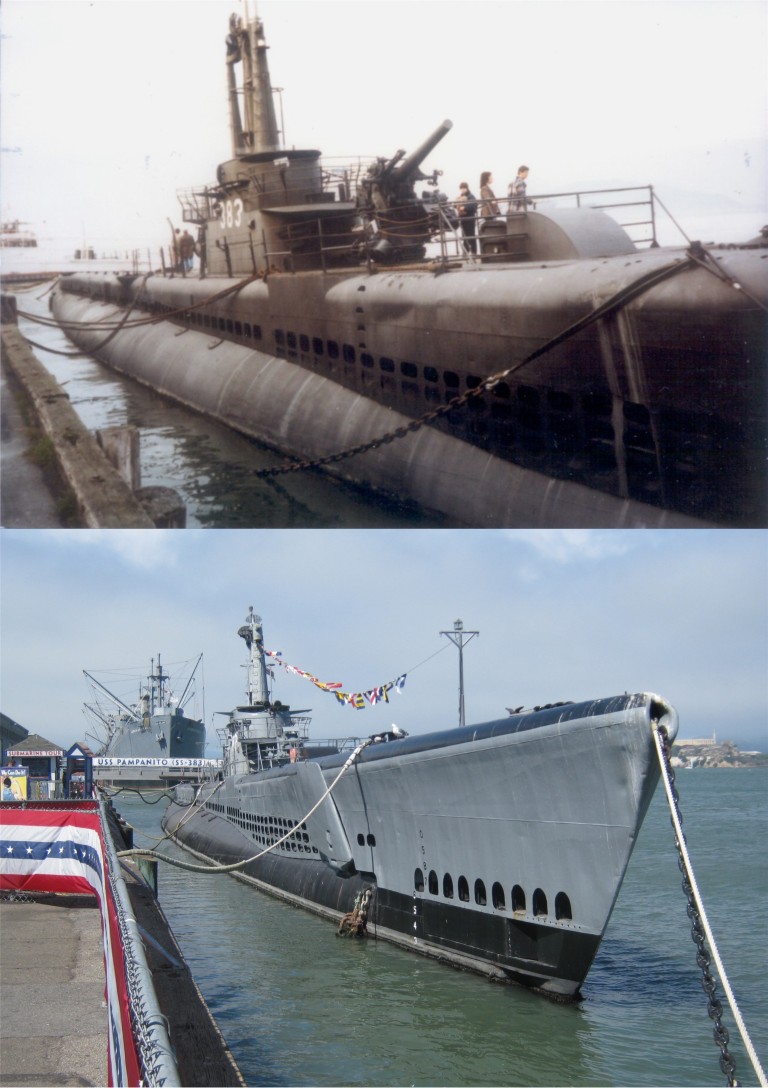 The USS Pampanito World War Two submarine at Pier 45 in 1982 or 1983: They sure have detailed her out really pretty today! 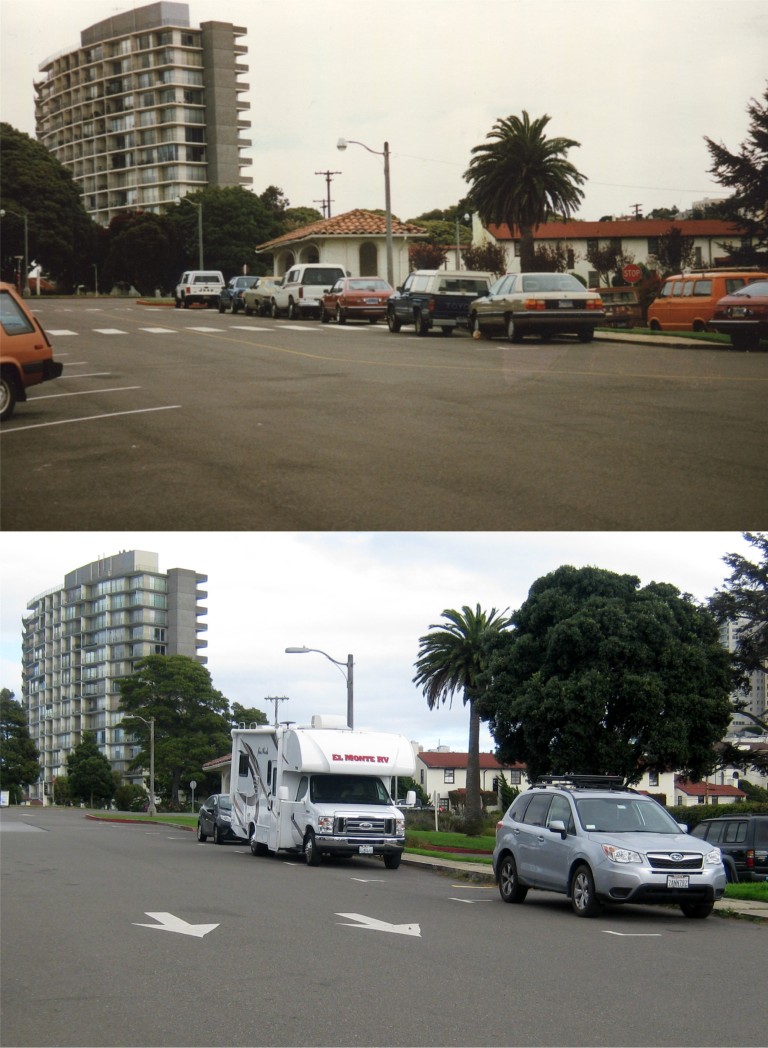 Fort Mason looking east in 1984 or 1985: That RV is almost blocking out the old adobe streetcar stop in my current picture. 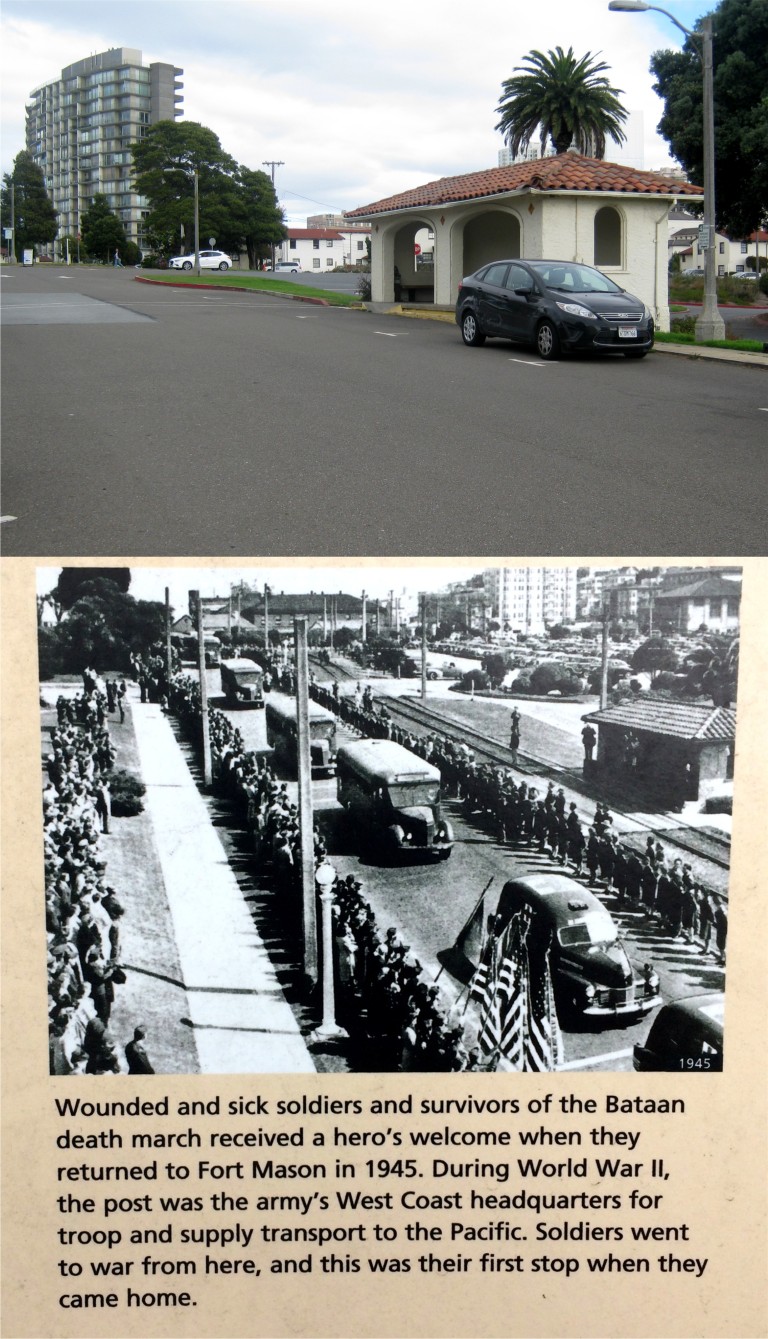 But the little streetcar stop is still there, although streetcars no longer run here. It must have been a lonely feeling for a lot of people who got off the cars here and were going overseas to help win World War Two. Although so many of them didn’t come back, there’s an historic picture at this spot in Fort Mason in the bottom photo of some of the people who did return.

3 thoughts on “Snapshots from the Eighties”