These are then and nows at places where I’ll often stop for breakfast, lunch or sometimes dinner when I’m out in the field working on a post.

I like the breakfasts at Tad’s Steakhouse on Powell Street just north of Ellis and often get an early start on the day there when get off at the Powell Street BART Station. The vintage picture from OpenSFHistory.org was taken roughly at the same area looking back toward the Flood Building during the 1906 Earthquake and Fire.

It wasn’t a hangout of mine, but just up from Tad’s in the green building in the center was the world famous ‘Omar Khayyam’s’ Restaurant. The vintage picture from OpenSFHistory.org was taken in the early 1950’s. The restaurant was destroyed by a fire in the 1980’s. 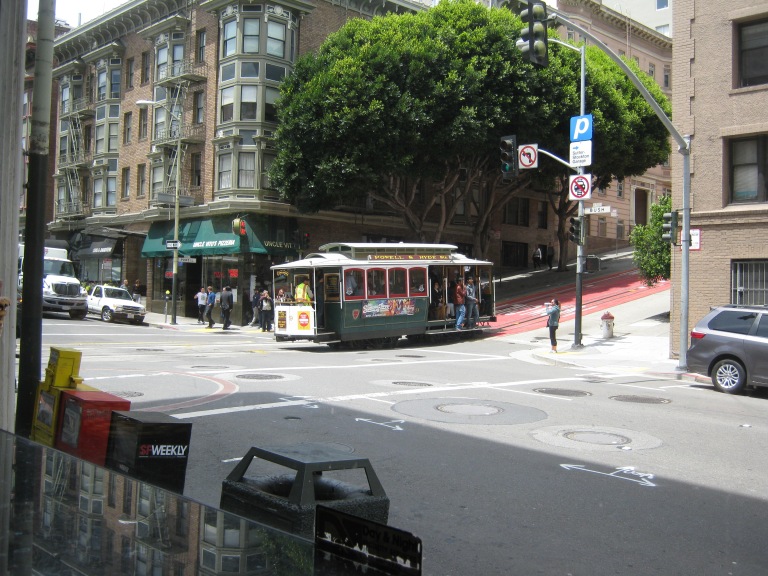 The top two pictures were taken at the southeast corner of Powell and Bush Streets. Right on this corner, just up from Union Square is Roxanne’s Café. They not only serve good breakfasts, but I often take advantage of their spaghetti and meat balls when I’m in the area. It’s nice to watch the cable cars clanging up and down Nob Hill while I’m having lunch there. The bottom photo is from my usual table when I stop there. The vintage picture from OpenSFHistory.org was taken in 1958. 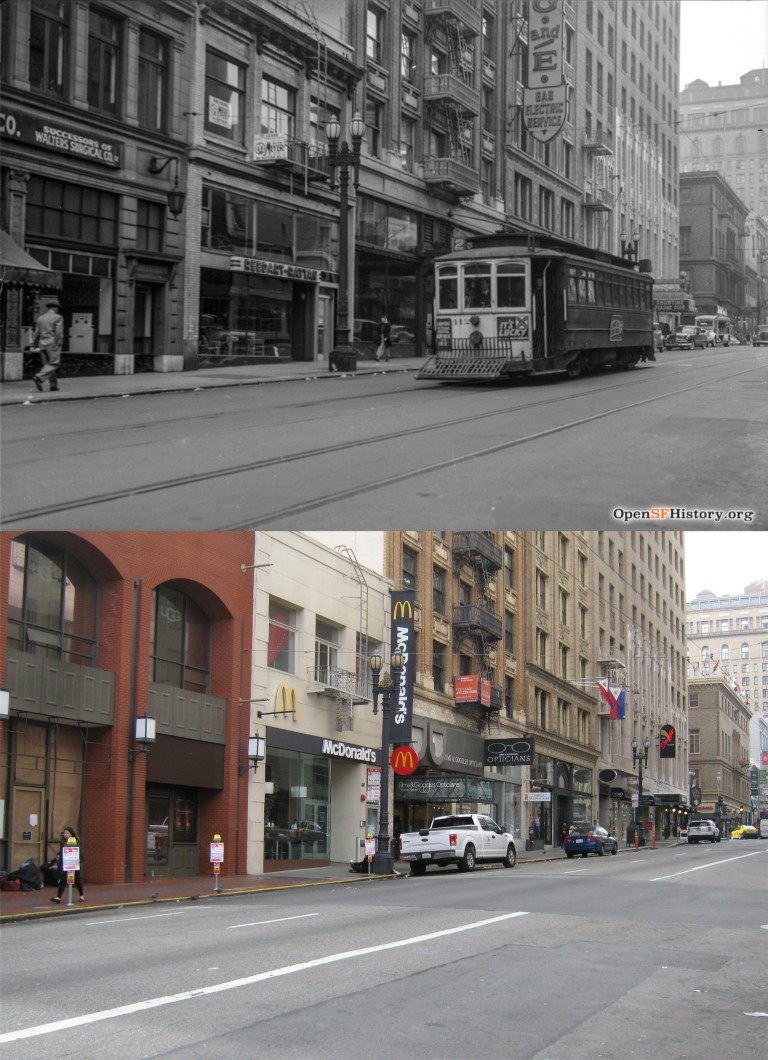 Sometimes, I’m only in the mood for a fistful of French fries in one hand and some chicken nuggets in the other. I usually stop in at the McDonald’s here on Sutter Street between Stockton and Powell when that urge hits me. It’s often crowded, but there’s seating upstairs, and sometimes it’s all I’ll need to make it to dinner. The Sir Francis Drake Hotel is on the corner at the right. The vintage picture from OpenSFHistory.org was taken in October of 1948.

I used to go to #9 Fishermen’s Grotto for lunch when I was at the Wharf, but when they closed down for so long because of a change in ownership. I started going regularly to Alioto’s; either way you’ll do okay. The Grotto has recently reopened, but I haven’t checked it out yet. (Vintage photo from Foundsf.org)

It was sad to drive by Mason and Bay Streets on Christmas Day and learn that they finally tore down the old Ginsberg’s Pub. What fun we had there during the 1980’s and 1990’s! In fact, I was in there at 5:04 PM on October 17th 1989. A buddy named Mike and I drove through the old Cypress Structure, crossed the Bay Bridge and headed to Candlestick Park to try to buy tickets from scalpers for the third game of the 1989 World Series. As I remember the lowest price was $300.00 dollars each, which was more than we had at the time. So, we headed for Ginsberg’s Pub. We had just settled in with a hot dog and pitcher of beer when the Loma Prieta Earthquake struck. I went outside of the pub after the shaking stopped and the first thing I saw was a dog running in panic north on Mason Street. Then I looked around at the eerie stillness at twilight of San Francisco with all of the power out. After that, was one of the longest nights of my life trying to leave San Francisco. All of the bridges were closed, I was out of gas, and San Francisco had no electricity. I’ll always think about that night when I pass this corner. I took the top photo on October 17th 2009 after Ginsberg’s had closed. 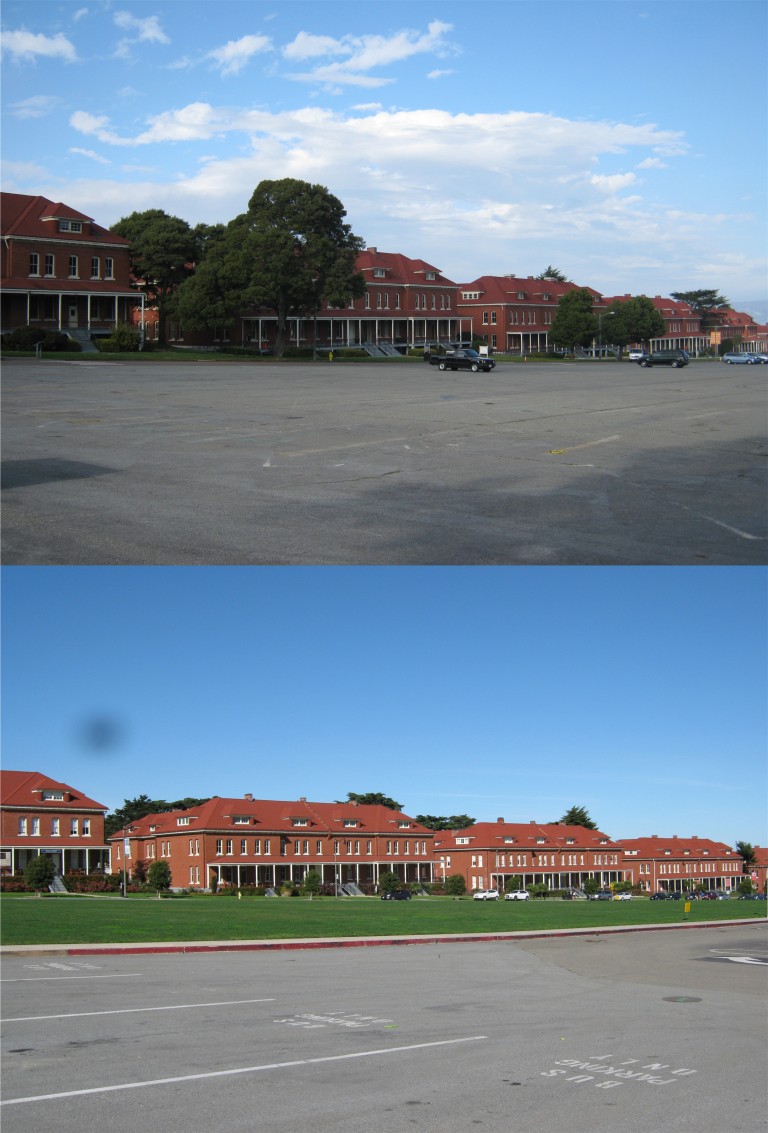 Another “quick fix” place I enjoy is the Presidio Bowling Alley. They serve a pretty good hamburger and a ton of fries at the grill there, and healthy stuff too! The bowling alley sits at the southern end of the parade ground of the old historic Montgomery Barracks. I took the top photo looking toward the barracks in December of 2009. That black Mitsubishi pick up truck is mine. It has close to 220,000 miles on it to date and I still drive it. I had a chance to talk with two more nice people here when I took the current picture, Kim and Nate, who work at the Presidio. It was great to listen to them talk about some of the history of the Presidio as well as some of the future plans for the historic army base.

I enjoy the area of the Cliff House Restaurant and I go there as often as I can. Although I love the Cliff House, more often I’ll have breakfast or a burger at the Louis’ Restaurant just up Point Lobos Road from the Cliff House. The views of the Pacific Ocean and the old Sutro Bathhouse ruins are just as good as you can get from the more famous restaurant. The vintage photo was taken in 1966 the day that Sutro’s burned down.