I’ve done posts in the past on the 1962 thriller ‘Experiment in Terror’ but I watched it again this week on Turner Classic Movies and decided that it’s too good of a movie for me not to do a follow up on. Here’s the plot set up. Garland “Red” Lynch (Ross Martin) has threatened to kill Kelly Sherwood (Lee Remick) and her sister Toby Sherwood (Stefanie Powers) unless she steals $100,000.00 from the bank she works at, the Anglo Crocker Bank (now Wells Fargo) at Montgomery and Post Streets. Kelly contacts FBI agent John Ripley (Glenn Ford). I’ll let the pictures take over from here.

The bank that Kelly, the teller on the right, worked at still has the old floor clock near the entrance to the bank that’s shown in the film 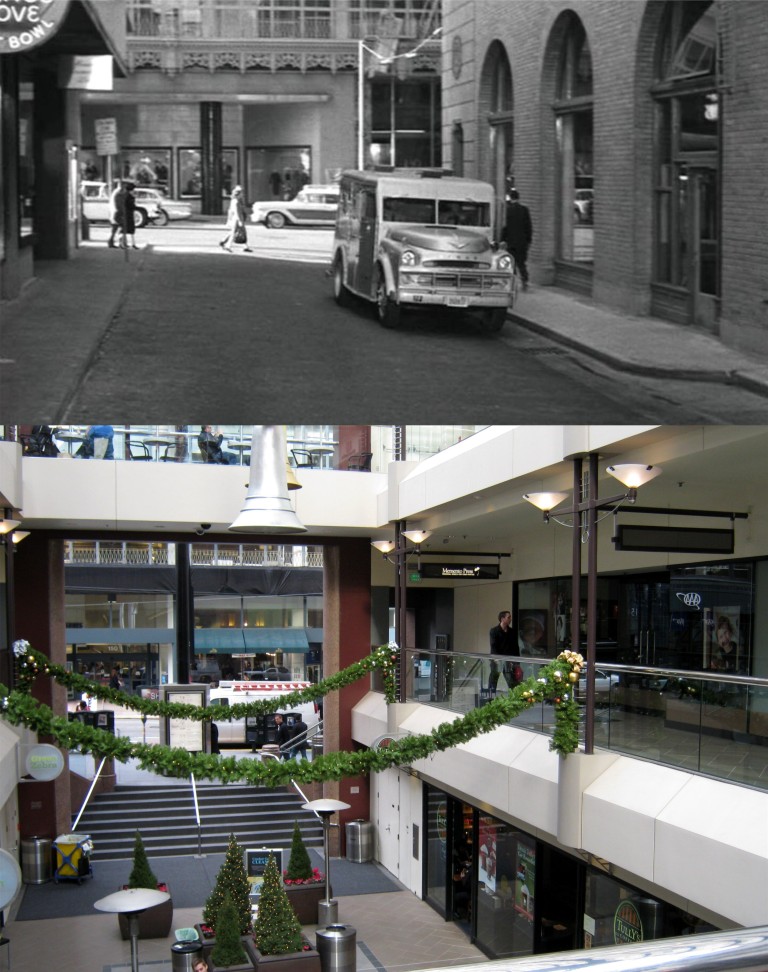 An alley that once ran behind the bank is now the location of the Crocker Galleria Mall. 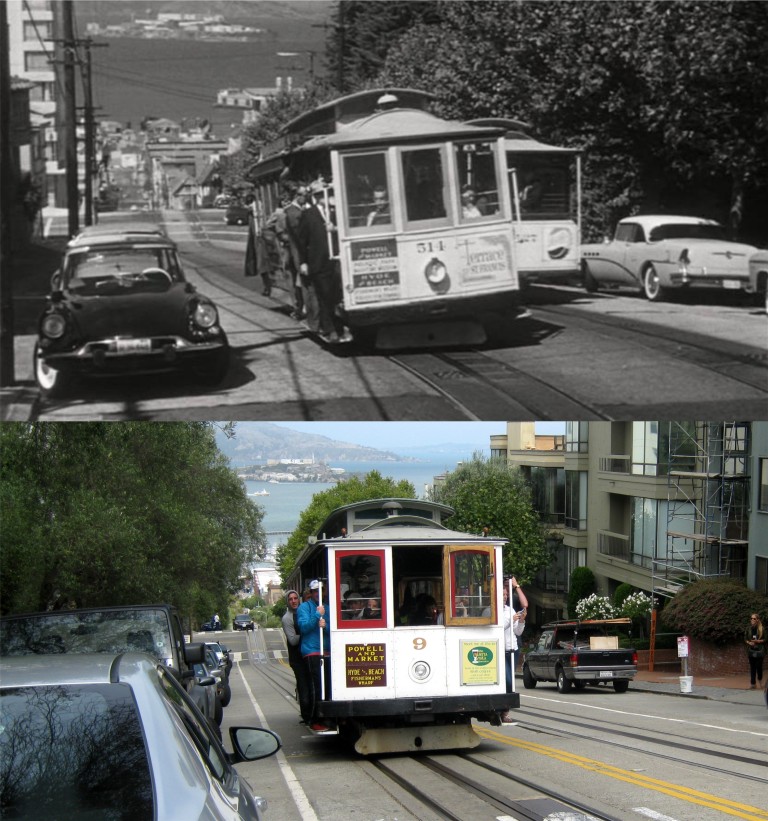 After determining the suspect’s identity, FBI agents search the city to try to find the whereabouts of “Red” Lynch. Here, two agents jump off a cable car at the top of Hyde Street at Lombard. It’s not likely that FBI agents ride cable cars when they’re looking for criminals.

One of the agents crosses over to a completely empty “Crookedest Street in the World”. It’s never that quiet here anymore. 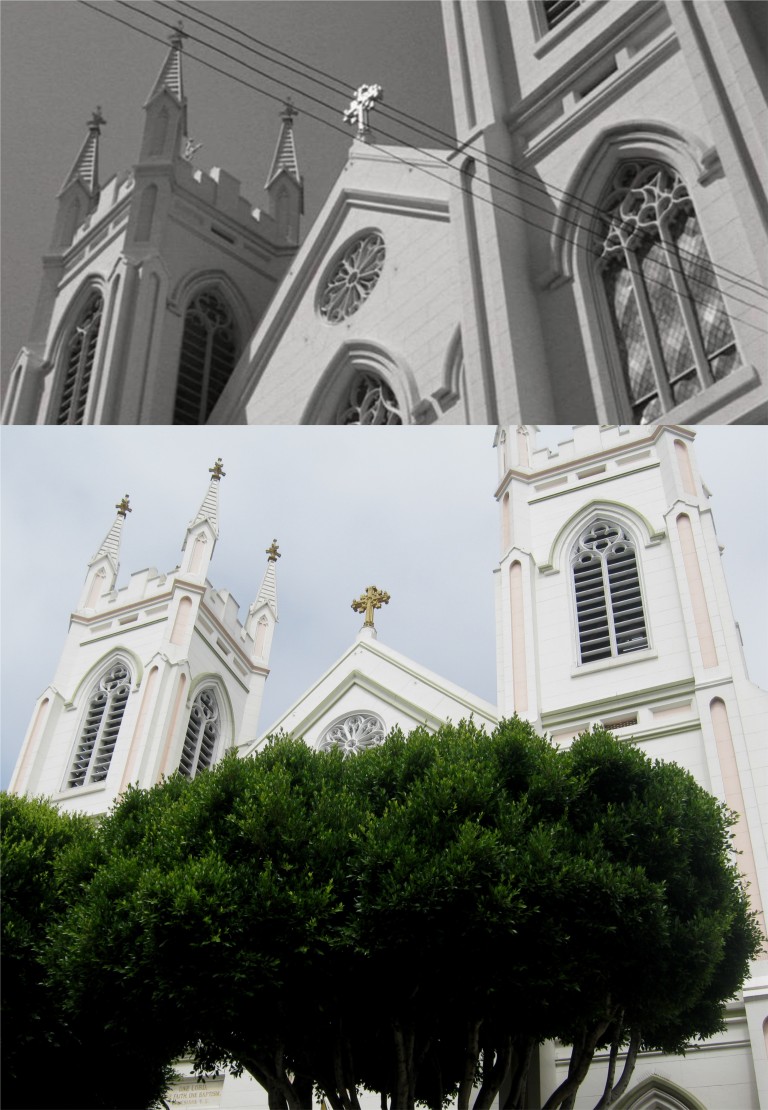 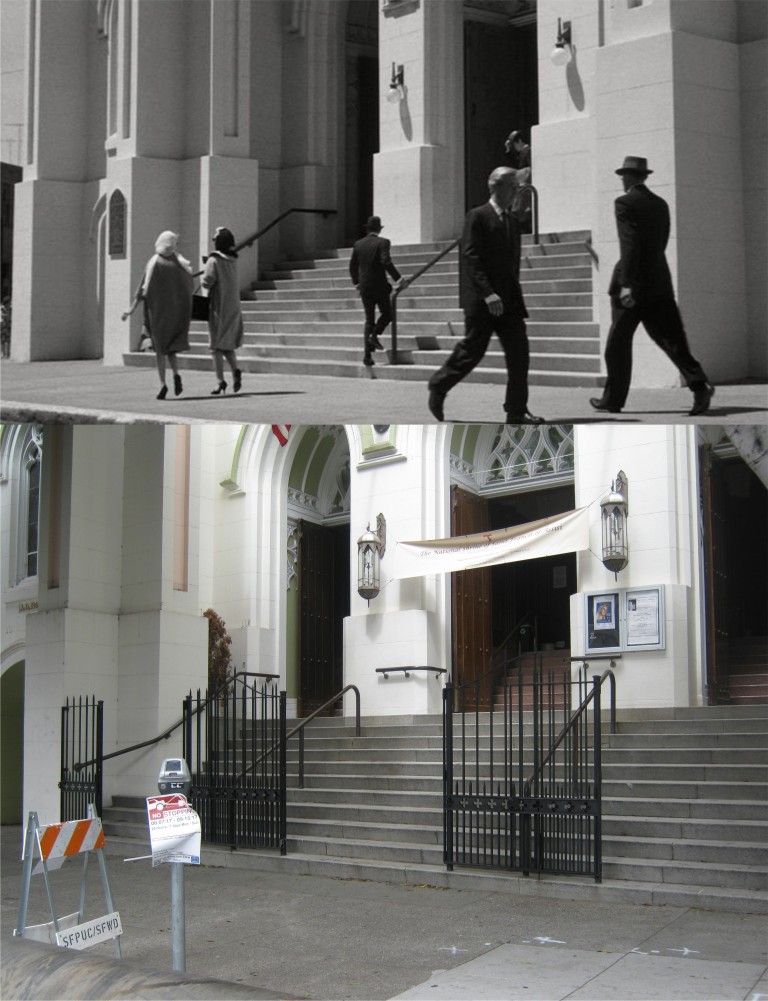 Ripley visits the Church at the National Shrine of Saint Francis of Assisi on Vallejo Street. That’s him heading up the steps. 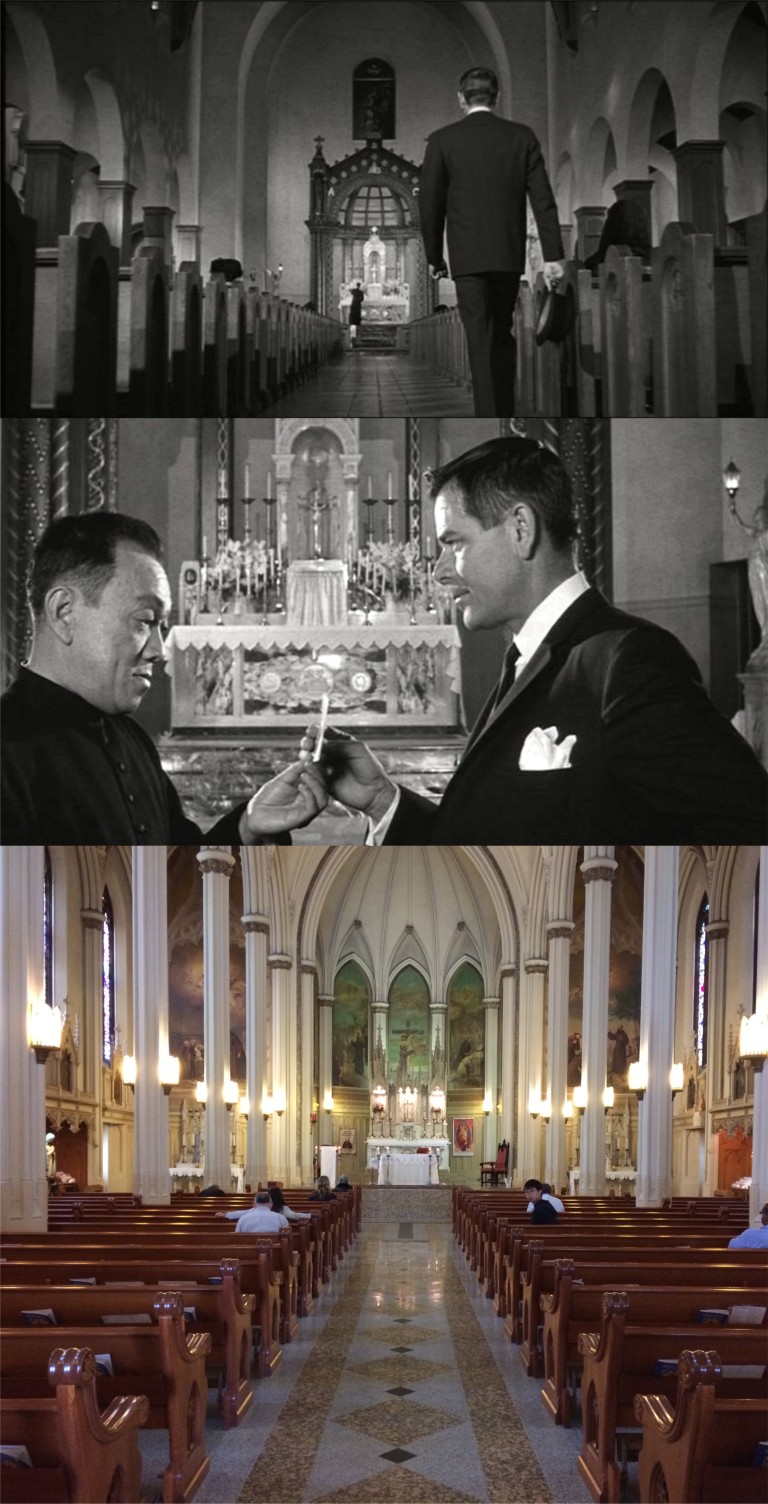 The priest inside the church gives him a clue about a person the Lynch often visits. The Church of Saint Francis of Assisi, established in 1849, has a claim to being the second oldest church in San Francisco after Mission Dolores. The bottom picture is the inside of the church nowadays.

At this point Lynch gets tired of Kelly’s stalling and kidnaps Toby on 25th Avenue near Clement.

Kelly, learning of her sister’s kidnapping, steals the money Lynch demands and drives to Fisherman’s Wharf to await instructions on where to deliver the ransom.

Kelly parks in front of Alioto’s Restaurant and walks across Taylor Street to a telephone booth not knowing that she is being followed by the FBI who have never let her out of their sight.

“Hmm, I wonder if anybody is watching me.”

Well, only about half of the FBI in the Bay Area. That’s agent Ripley watching her from a car. The telephone booth would have been just behind where the motorcycles are. 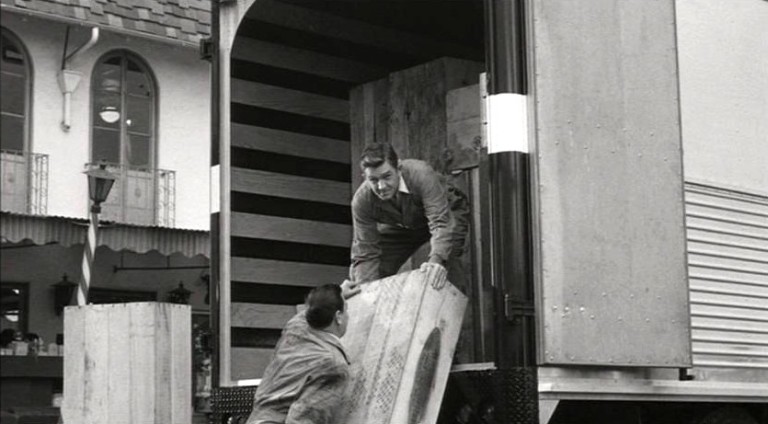 The men loading the truck in front of #9 Fishermen’s Grotto are from the FBI, as well. She’s getting more FBI surveillance than Alger Hiss did!

After getting a telephone call from Lynch, Kelly walks past Ripley’s car toward Jefferson Street.

The agents follow her. Either Kelly’s not very observant or they’re doing one heck of an undercover job!

Kelly gets into a taxicab at Jefferson and Taylor Streets in front of the Sea Captain’s Chest Gift Shop. I remember that gift shop as a kid.

Kelly finds Toby’s clothes and a ticket to a San Francisco Giants and Los Angeles Dodgers baseball game at Candlestick Park in the taxi. Many of the scenes for the denouement of the movie were filmed during an actual Giants-Dodgers game out at “the Stick”.

All’s well that ends well as Ripley shoots Lynch dead on the pitcher’s mound after the game and Kelly and Toby are reunited. I got a chance to take this comparison picture during a tour of Candlestick Park shortly before it was demolished. In case you missed the movie or don’t want to sit through the whole film, the link below will give you a brief review of the film with the Henry Mancini soundtrack from the opening credits.

3 thoughts on “‘Experiment in Terror’ revisited (For Keith and Janet)”