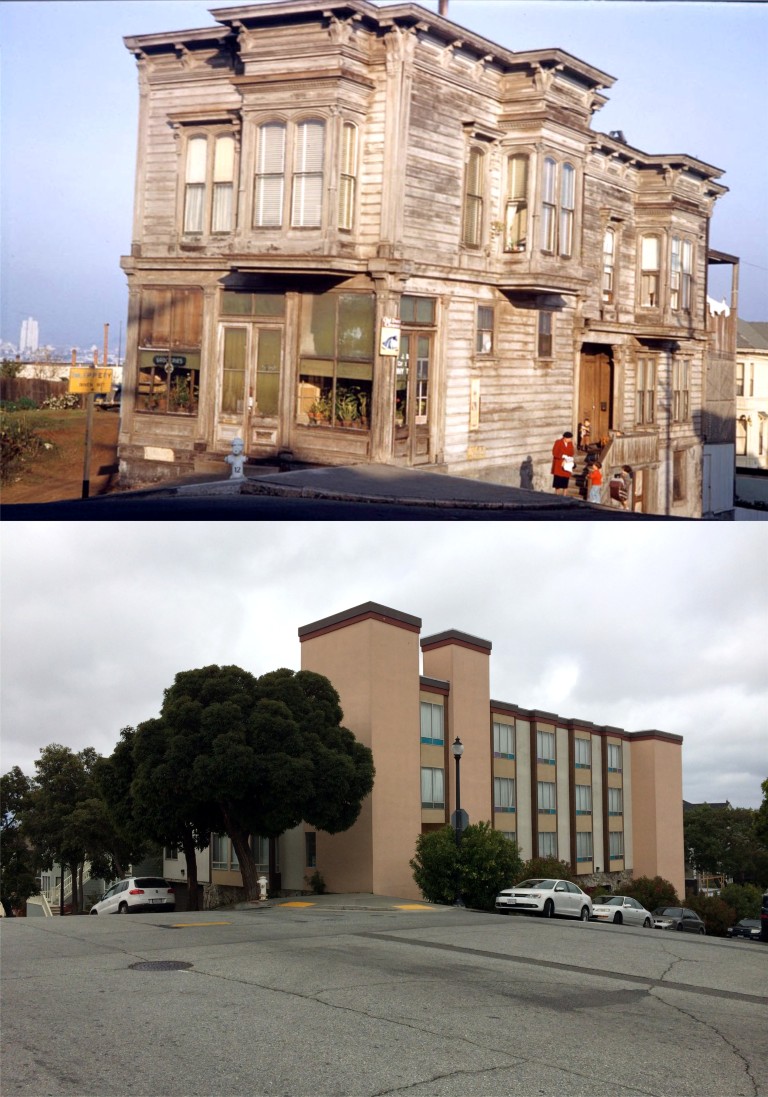 The northeast corner of 21st and Church Streets in 1952:

“Aw, Mom, we don’t want to go in that store, it’s creepy! There’s triffids in there!”

Actually, it looks like they lived in that place! I’m always, sort of, a proponent for preserving old San Francisco buildings, but this one, probably, had to go! (Cushman Collection) 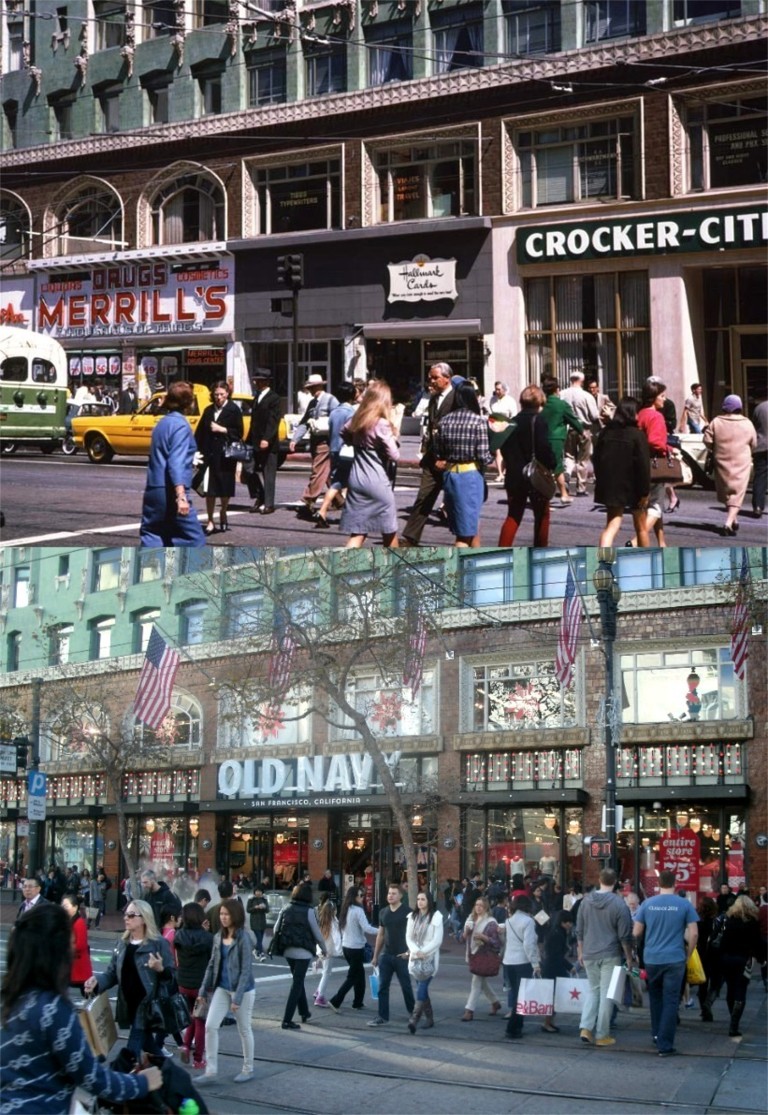 Well, now you know what people looked like in the Market Street crosswalk at Stockton Street in the 1960’s as compared to today. So, that’s one less thing to wonder about! 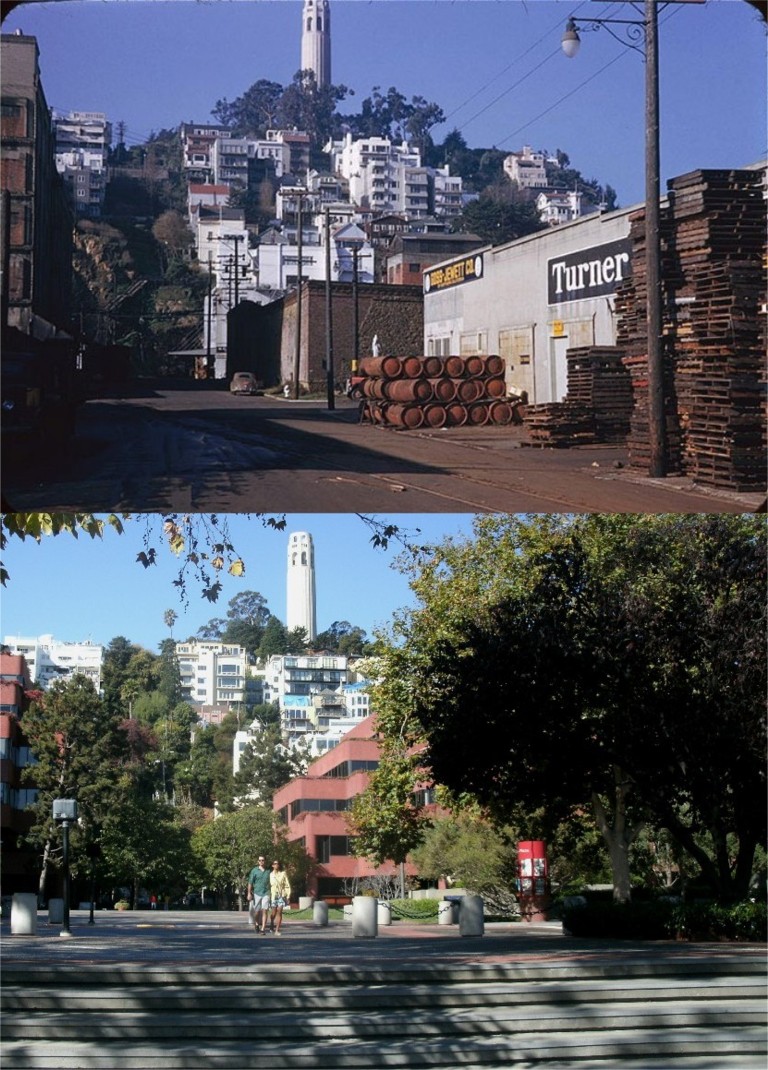 This once seedy looking area of Filbert Street beneath Telegraph Hill is now Levi Straus Plaza, one of the best spots for an outdoor lunch in Downtown San Francisco. (Cushman Collection) 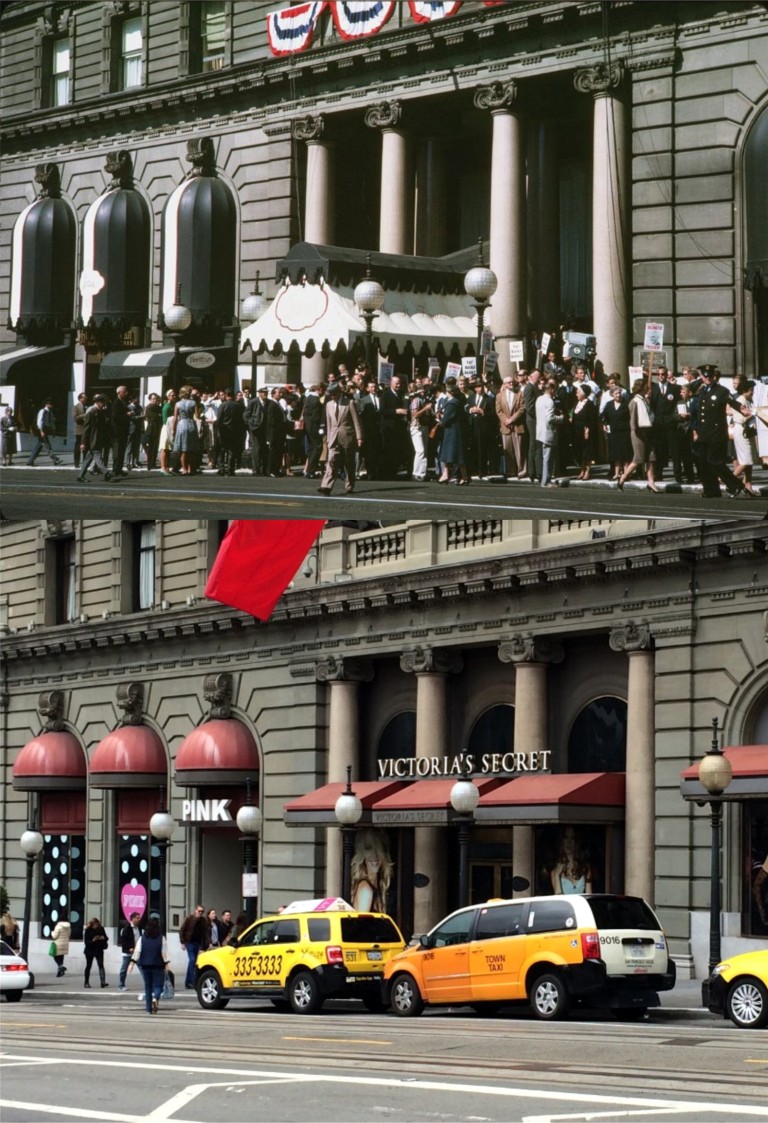 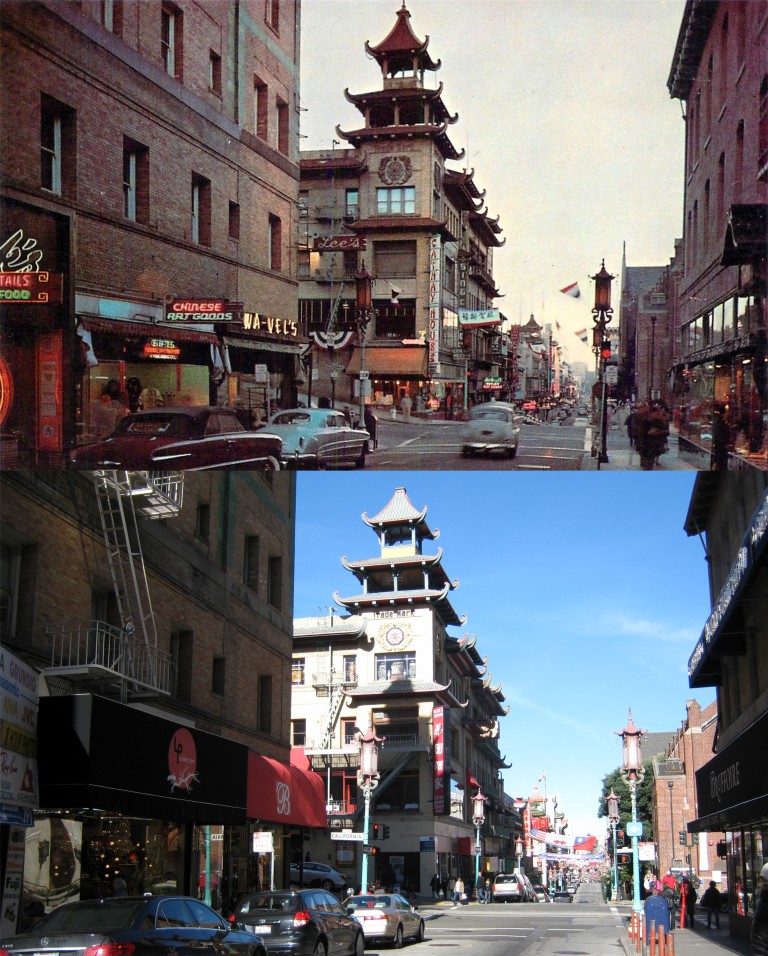 I know, “Doesn’t he have anything better to do than to go around Chinatown taking pictures?” Well, the answer is….. “No, not really!” 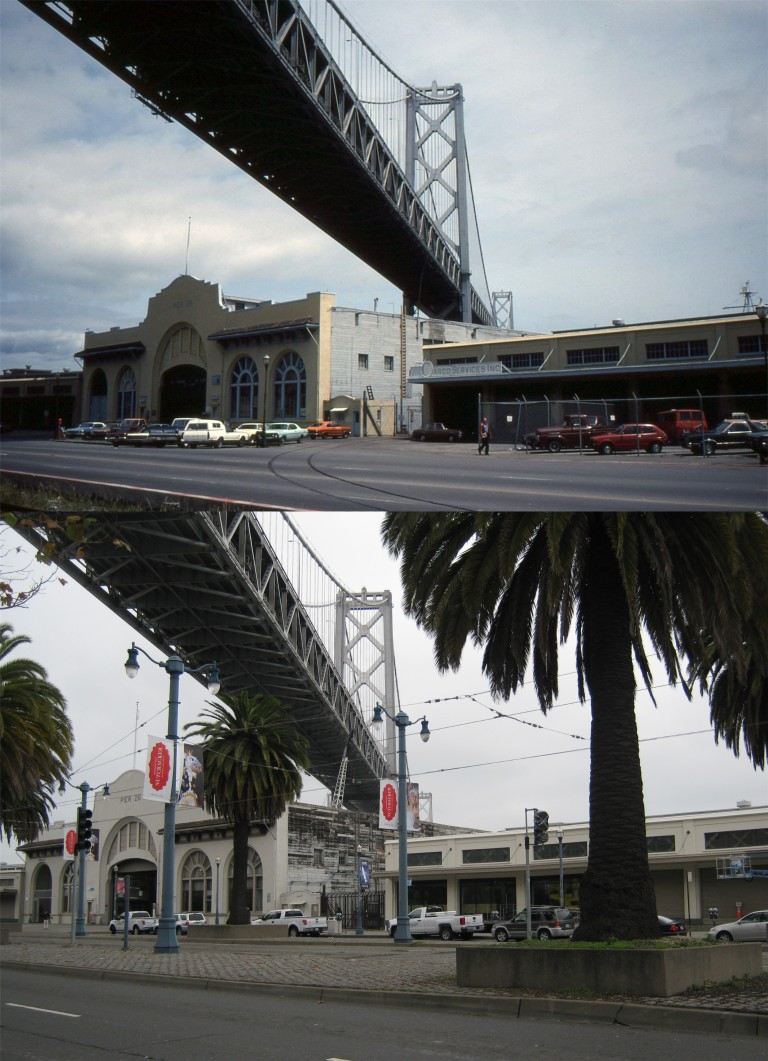 Pier 26, directly under the Bay Bridge from a slide picture I took in 1983: Sometimes, being a colorful city doesn’t always mean San Francisco gets it right. Around that year somebody got the bright idea of painting all of the piers on the Embarcadero mellow yellow and baby blue.  I remember saying to myself back then, “What’s with that?” Of course, people didn’t say, “What’s with that?” in 1983, I probably said, “How grody!” 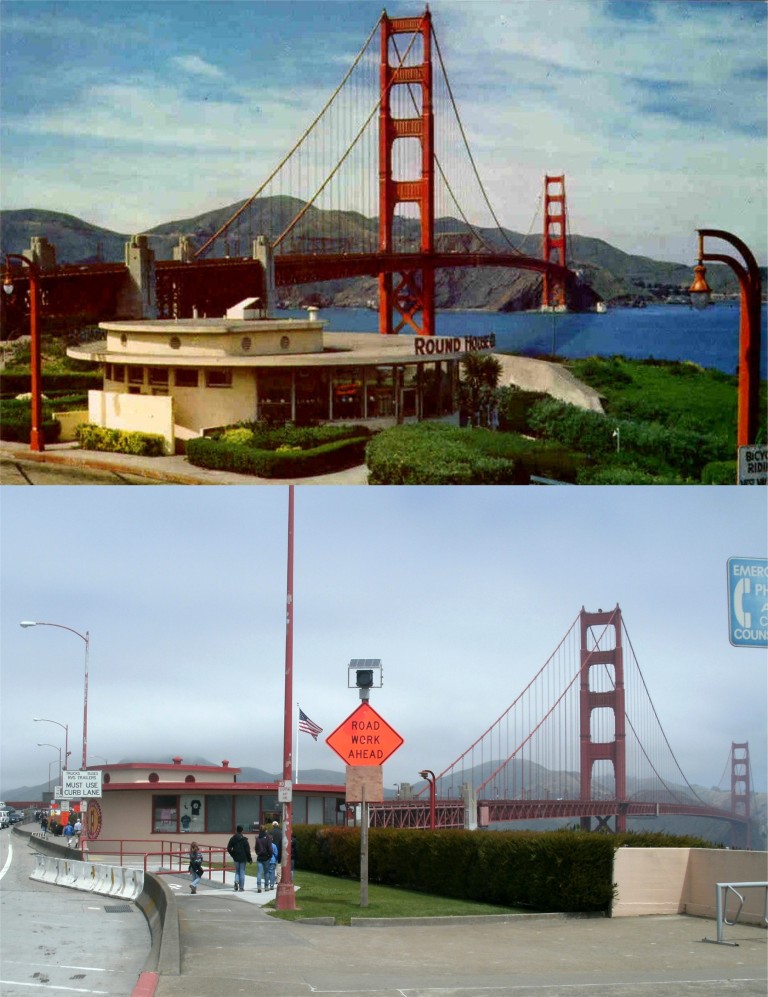 The old Roundhouse Restaurant at the Golden Gate Bridge, built in 1938 and seen in several film noir movies such as ‘Dark Passage’ and ‘The Man who Cheated Himself’ eventually became a gift shop for a number of years, but closed prior to 2012. It is now reopened as the Roundhouse Cafe. What goes round comes round! 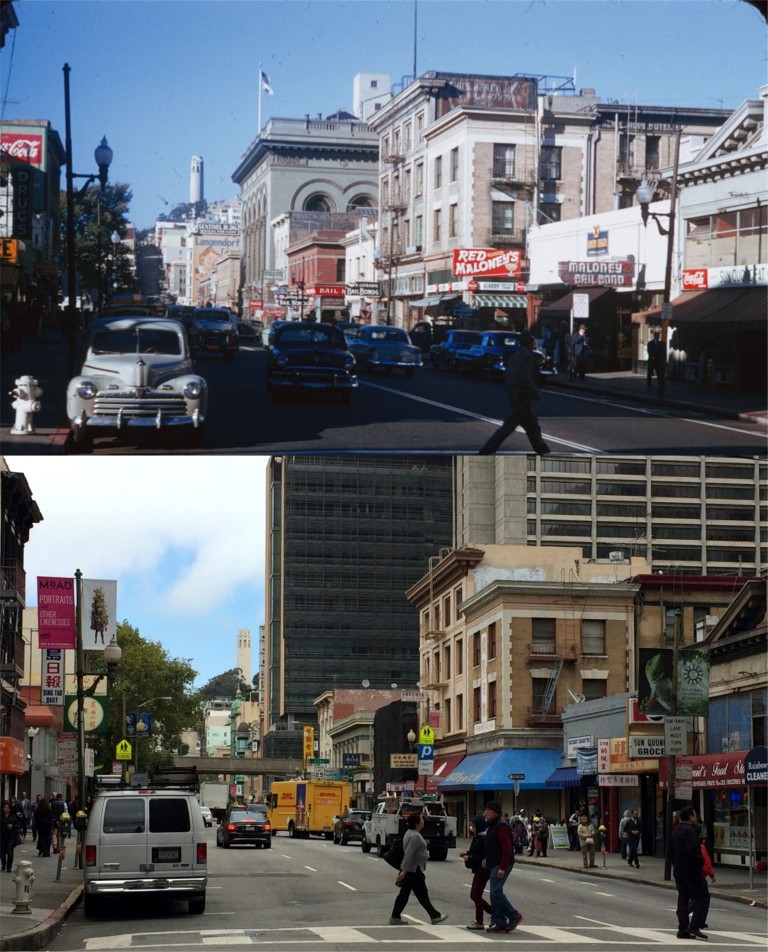 Red Maloooooooooney’s: Kearny at Sacramento Streets, 1952: If you’re wondering why all the bail bonds places, the building with the arched windows to the right of Coit Tower was the old Hall of Justice, seen in many old movies and television shows before it was demolished in the mid 60’s for a Hyatt Hotel. (Cushman Collection)

A then, then and now! These are three images of where Leavenworth Street used to cut into Market Street. (It doesn’t anymore) The top picture is from the 1950’s; you can see Leavenworth coming in on the left. This area was right in the heart of where all the movie theaters, such as the Artists Theater were in operation for decades. The California Western State Life Insurance Company was occupying the David Hewes Building built in 1908. The Odd Fellows Fraternity Building, built in 1909, is on the corner of 7th and Market Streets. In the middle photo from 1967, Merrill’s Drugs, Fosters Restaurant, the Federal Hotel, and, of course, the inevitable buses are still around. Although, C.W.S.L Insurance, (easier to abbreviate) is gone, the David Hewes Building is still there, although extremely remodeled and green. The Artists Theater was then called the Centre. (I don’t know if that was pronounced Center or Centray!) In the modern picture at the bottom the Odd Fellows Building is still around, Foster’s and Merrill’s are gone, and the Federal Hotel is now the Aida Hotel. And, of course, the Market Street buses are still rolling.