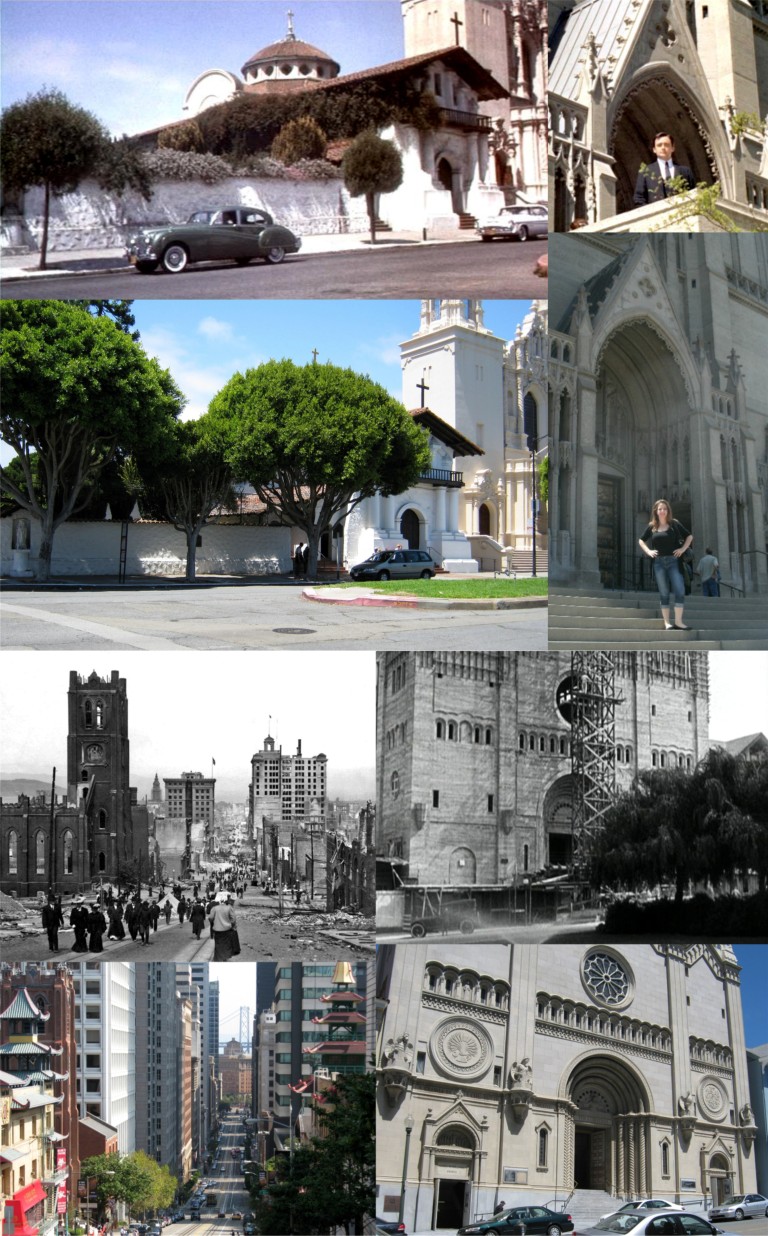 San Francisco Churches: Upper left, the green Jaguar parked in front of Mission Dolores was driven by Kim Novak in the 1958 film ‘Vertigo’. Parked behind her is Jimmy Stewart’s Desoto. Miss Novak portrays a woman who believes that she is being possessed by the spirit of a lady named Carlotta Valdes who killed herself in 1857, and she must do the same thing. I feel better about my own hang ups now! Upper right, two intriguing individuals at Grace Cathedral; Robert Vaughn, the Man from U.N.C.L.E. and Dianne, the Girl from T.R.O.U.B.L.E. Both made an impression on my life; one of them was a childhood hero, and one of them gave me my dog ‘Danny’. No, Dianne wasn’t the childhood hero. The steps to the entrance have been remodeled since the Robert Vaughn scene from ‘Bullitt’ and the balcony he’s looking from has been removed. Lower left, dazed survivors of the 1906 Earthquake wander down California Street passed a burned out Old St. Mary’s Church in Chinatown on the left, and St. Mary’s today, seen behind the pagoda building. The biblical passage under the clock above the entrance is from Ecclesiasticus, Chapter 4; “Son, observe the time and fly from evil” (I wasn’t that good of an altar boy, I had to look that up) Lower right, Cecil B DeMille made two versions of ‘The Ten Commandments’, the 1956 film that deals, largely with the Exodus, and the lesser known 1923 movie that is two stories in itself; the story of Moses and the Ten Commandments, and a modern day (1923) story of two brothers, one good, one bad. The modern story was filmed mainly in Washington Square during the building of Saints Peter and Paul Church. The evil sibling who is contracting the construction uses faulty cement for the foundation which causes a wall to collapse on the mother of the two who has come to visit her good son working on the structure, and kills her. The wicked brother goes insane because of this. The only reason that I can see for the updated part of the movie, is to show what can happen to us if we break God’s Commandments. Of course, that doesn’t explain why the kindly mother had to get crushed, but I try not to examine these lessons too deeply.