“Who’s on 1st, What’s on 2nd, I Don’t Know’s on 3rd .”  I took a walk around the downtown portions of First, Second and Third Streets, south of Market Street last Friday in the rain, and yesterday. I’m never sure if the numbered streets and avenues in San Francisco are correctly written alphabetized or numeric; I think it’s okay either way. There’s a lot more than the portion of these streets that I covered in my jaunts, but there’s a Denny’s Restaurant on Mission Street between 4th (or Fourth) and 5th (or Fifth) that serves a good breakfast, and I didn’t want too wander too far away from it. Besides even though they’ve done a good job in clearing up the poverty and shabbiness these areas were once known for, there’s still some spots around here that look like a Dorothea Lange photo from the 1930s. (Thumbnail images)

1st and Market Street in 1955: First Street, (Well, I’m not sure, so I’ll just print them both ways during this post) was one of the first streets we walked along from the old Transbay Terminal on Mission Street to get to Market Street when we first started riding the bus over to the City when we were in high school. I remember we once asked a police officer standing on the southeast corner of 1st and Mission how to get to Chinatown. He said to us, jokingly, “Why do you want to go there? Do you want to get shanghaied?”  We weren’t sure what the word meant back then, but we were tough kids and we weren’t going to get shanghaied unless we wanted to. When we found out what it meant, it did kind of sound like fun. (Vintage picture, San Francisco Pictures Blog)

1st and Mission Streets, looking north along 1st in 1970: The southeast corner where the policeman warned us against “danger” is on the right in both pictures. I remember the Foster’s Restaurant in the vintage picture, and the old and new Transbay Terminals were out of the picture on the right. (San Francisco Pictures Blog)

2nd  and Market Streets, looking toward the Ferry Building in 1949: When you walk south down Second Street, parts of it haven’t changed much since before World War Two. (San Francisco Pictures Blog)

2nd Street, looking past Stevenson Street toward the Hobart Building in 1917: The Hobart Building, built in 1914, is one of my favorite buildings on Market Street. I didn’t always feel that way. When we were teenagers we snuck up into the tall steel framed Wells Fargo Building north of the Hobart Building. I remember looking down at the Hobart Building and thinking that they needed to replace that old eyesore with a modern building like the one we were in. Boy was I cemented in the present during high school! When I walk by here now, I admire with respect the old Hobart Building, and I don’t pay any attention to what was once the Well Fargo Headquarters Building. (opensfhistory.org) 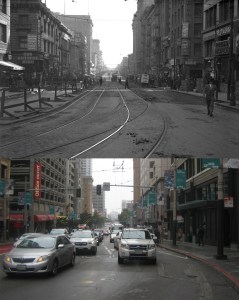 3rd Street, looking south from Market Street in 1914: In a murder mystery he wrote in 1948 titled ‘Many a Monster’, Robert Finnegan describes Third Street this way;

{Third Street, commonly called Skid Row or Skid Road was the street of down-and-outers, lined by pawn shops, junk stores, cheap saloons and gaunt-looking hotels. Here and there a ragged drunk slept in a doorway with an empty bottle clutched to his breast. Prostitutes, fat and dowdy, thin and tuberculous (sic) wandered in and out of barrooms on crooked heels.}

Projects like the Yerba Buena Center and the San Francisco Museum of Modern Art pretty much put an end to that era. (SFMTA / San Francisco Pictures Blog)

Looking north on 3rd St, between Folsom and Harrison Streets in 1915: In the far background is the crown of the old Call Building, to the right of it is the gothic looking Mutual Savings Bank Building; both survivors of the 1906 Earthquake and Fire. The Call Building, now known as Central Tower, can barely be seen from here now. The old Mercantile Building on Third and Mission Streets, another survivor of the 1906 disaster, is to the left of the Mutual Savings Building, behind the OWL Cigars sign in the vintage picture . (San Francisco Pictures Blog)