I don’t know if there’s such a word as noirish, my word program on my computer has it underlined in red, but if not, I’ll pretend there is. These are a collection of black and white updates of pictures that have a noirish appearance. (There’s that word again) Some of the vintage pictures are from movies that would be considered film noir, but most of the old images are just noirish looking. Hmm, my word program’s going to run out of red ink. (Thumbnail images)

Downtown San Francisco in the 1950s from Ina Coolbrith Park: 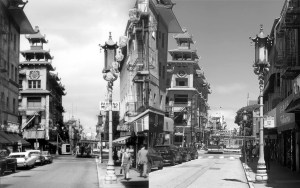 Chinatown, at Grant Avenue and California Street, circa late 1950s: The cable car operators were practicing their runs yesterday for today’s official opening of the cable cars, and now that intersection looks more natural. (Gene Wright)

Another image at Grant Avenue and California Street from the 1949 film ‘Red Light’ starring George Raft and Raymond Burr: Old St. Mary’s Church is in the background. I like that shadowy figure in the film shot. 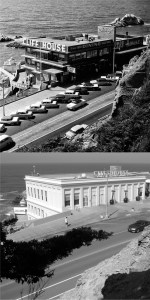 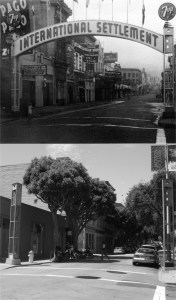 A spooky looking International Settlement on Pacific Avenue at Montgomery Street during the 1940s: (ebay.com)

Jones Street, looking down from California Street during the 1950s: This is a scary street to drive down.

The top of the Filbert Steps on Telegraph Hill during the 1950s from another Fred Lyon image:

A Communist safe-house near Clay and Mason Streets from the 1948 film ‘Walk a Crooked Mile’: This movie has some great shots of Nob Hill and Chinatown. 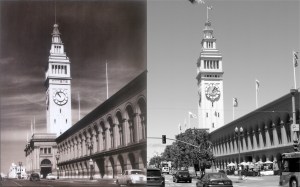 Naturally, you can’t have a San Francisco noirish updates post without including the Ferry Building; from a 1951 picture by Gene Wright.

One thought on “Noirish updating”