There are lots of fine Squares in San Francisco; Alamo Square, Washington Square, although that one is more of a Square with the southwest piece chipped off, Jefferson Square, which is more of a rectangle, and Portsmouth Square where San Francisco actually began. Union Square is my number one Square. The title to this post, ‘Back to Square one’ is misleading; it implies a return after an interval of separation, but truth is I visit Union Square almost every time I go to Downtown San Francisco. It’s been relatively empty since March of 2020, and I notice myself feeling depressed often now when I stop there. Like so many other places in San Francisco, the quiet of Union Square these days leaves me with an empty feeling, missing the way things used to be. Herb Caen loved Union Square, as well, although he would criticize the pigeons and crowded parking lot. As with thinking about the cable cars, the Cliff House, and Herb Caen, I get a lonely feeling of something missing in San Francisco more in Union Square than anywhere else in town. But enough of this lamenting, let’s take another visit to the Square. (Thumbnail images)

A trip to Union Square usually begins for me with a BART trip to Hallidie Plaza at the Powell Station, seen here in a vintage picture from the 1970s. The elevator shaft in the Plaza today prevents a perfect line up with the older picture. (sanfranciscodays.com) 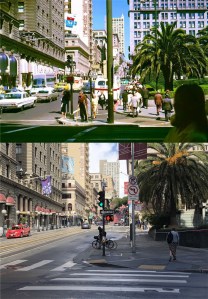 Crossing along Powell Street over Geary Blvd. into Union Square during the 1960s: The St. Francis Hotel is on the left. (Pinterest)

One block further north from the previous picture is the intersection of Post and Powell Streets, looks like during the 1950s. The City of Paris Department store can be seen behind the Dewey Monument, Macy’s was a lot smaller then, a cable car rattles past, and, a gentle reminder that it’s time for a shot of Old Crow Whisky. (Vintage Everyday)

I’ve mentioned in the past that this website is not about my pictures, pleasant snapshots at best, but about the interesting vintage photographs in the posts. I could make an exception with this one; this 1940s one has to be the ugliest picture of Maiden Lane I’ve ever seen. Still I find it intriguing. I don’t know it that’s an artistic inclination with me or a problem! (Vintage Everyday)

The I Magnin Department Store on the corner of Geary Blvd. and Stockton Streets, now a part of Macy’s, under construction in 1947: (SF Chronicle)

One of the best Union Square pictures I’ve seen, looking toward the northwest corner of the park during the late 1950s: The New Millennium make-over took away the 1940s look and feel of the Square, but it’s probably for the best in the long run. (Reddit) 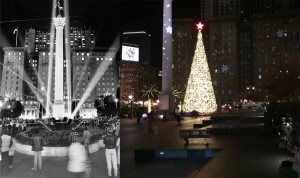 3 thoughts on “Back to Square one”