I’ve been staying in the East Bay Area for the past week or so, and haven’t been able to get over to San Francisco for awhile. Mostly, this is because the October 15th income tax deadline for those who filed an extension in July and who told me that they wouldn’t wait until October to file, are waiting until October to file! There’s nothing wrong with that; I haven’t filed my tax return yet, either. These are comparison photos taken in the two cities that I’ve worked in the most during my life, Oakland and Hayward, California. I’ll start in Oakland.

The following vintage pictures of Downtown Oakland are from the Downtown Oakland Property Collection: I spent most of my twenties in life working at this building on the corner of 12th Street and Broadway; the Bank of America Oakland Main Office, ‘OMO’ as it was referred to back then. Although Oakland had its issues then as it does today, I remember this area as being a fun place to be young in, and some of the happiest and romantic days of my life were spent in and around this building. It’s still a bank building today, Comerica Bank, which didn’t have any branches in the area back when I worked there. When I was employed there the building was owned by Robert Lurie, who was at that time the owner of the San Francisco Giants.

This is one block up at 13th and Broadway. The blue building in the center, which was on the corner of 14th and Broadway, was the Bank of California Building once. On the ground floor of the Bank of California Building was Smith’s Men’s Store. I remember buying a stylish suit at Smith’s about the third year after I started working for Bank of America that looked like something Rhett Butler would have worn if he would have around in the 1970s. Shortly after buying the suit, I was passing by Smith’s again while wearing it, and there was a panhandler on the corner who I ignored, as most people did back then. As I walked past him he yelled to me loudly, “Damn! Where’d you cop that bad-ass suit?” That was one the best compliments I’ve ever had in my life! I think I gave him five bucks!

This one is kind of special to me. I bought my very first suit the second year after I started working for the bank here at Bond Clothes. I was dating a teller named Melodie at the time who helped me pick the suit out. In fact, the little rascal insisted on going into the dressing room with me while I tried it on. Hey, I was young once too. After the renovation to the area, I wasn’t able to locate exactly where Bond Clothes used to be until I found this picture. Also, I still have that suit and can still get into it if I hold my breath deep enough. I’ll keep it for the rest of my life.

This is looking back toward 14th Street across Broadway from Bond Clothes at 15th Street. Downtown Oakland didn’t really look a lot different from these vintage pictures two decades later when I started working in the area.

This is looking back toward the Bank of America Building along 12th from Franklin Street. ‘OMO’ was really a fun building to work in. It had a rickety old elevator that ran four floors from the basement to the third floor. You could stop the elevator between floors by sliding open the crisscross metal door to catch a few kisses, if you were riding with the right company, before heading on to your floor.

About ten miles south of Oakland is Hayward. My father started his income tax practice in Downtown Hayward in 1960, and I continued running the business after his death in 1993. Hayward is where I do all of my income tax and bookkeeping work, edit the posts for my San Francisco photography website, and occasionally sleep with my feet up on the desk. The top vintage picture is Foothill Blvd near A Street looking north in the 1950s. This is about two blocks from where my dad’s income tax practice originally opened. This was once a bustling shopping area before the opening of the Southland Mall in the early 1960s, which eventually put all of the department stores in the vintage picture out of business. 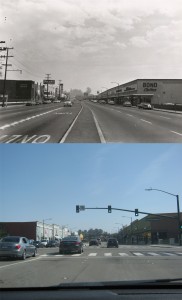 This is Foothill Blvd., looking south from the previous picture around the same time. Joseph Magnin, Milens Jewelers, Lewis Carpets, Bond Clothes, Smith’s, and all the rest, were doomed when the Southland Mall opened. (Hayward Area Historical Society)

The southeast corner of B Street and Mission Blvd long ago: Scenes were filmed at this corner in 1972 for the 1973 film ‘Steelyard Blues’, starring Jane Fonda and Donald Sutherland. (Pinterest / T.J. Soares)

Donald Sutherland chases Jane Fonda along Mission Blvd. to the corner of B Street, seen in the previous picture, past what is now called the Eden Loan Company in 1973’s ‘Steelyard Blues’. 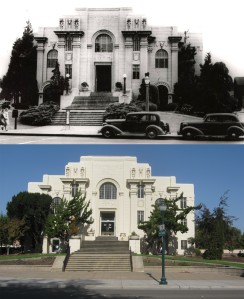 The old City Hall on Mission Blvd. empty for over 40 years:  Too bad they can’t find a way to reuse this fine old building. It’s sitting right on the Hayward Fault and isn’t worth renovating, I guess. One of my older brothers got tossed into jail here overnight for too much partying. He told me that the cell they had in the basement wasn’t any bigger than the one Andy and Barney used to always toss Otis into in ‘Andy of Mayberry’. (Hayward Area Historical Society) 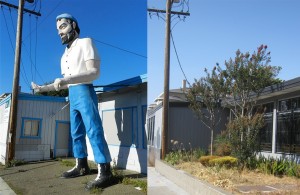 A Hayward landmark, “Big Mike” stood at this location on Mission Blvd. where a car wash used to operate for years. (Wikimedia Commons)