One of the television channels I’m able to get at home shows film noir movies Sunday nights under the title ‘Sunday Night Noir’. In fact, there’ll probably be a couple for me to screen tonight. To get in the mood, I’ll post  a collection of film noir movies set in San Francisco that I’ve done comparisons on. So, wait until it’s dark, grab a bottle of hooch, keep a “roscoe” handy, be wary of any femme fatales, and check out my post. Some of the DVDs I used haven’t been fully restored, but they’re clear enough, and they may spark your interest in the movies if you haven’t seen any of them yet. (Movie posters, Wikipedia, Amazon.com, Moviepostershop.com) 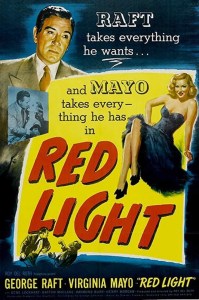 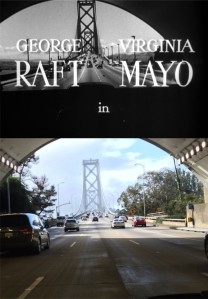 ‘Red Light’, from 1949 starring George Raft and Virginia Mayo, was a movie I just recently saw on ‘Sunday Night Noir’. Any movie that opens up driving out of the Yerba Buena Tunnel onto the Bay Bridge can’t be all bad, and this one isn’t, although the religious motif is seldom used in movies today. 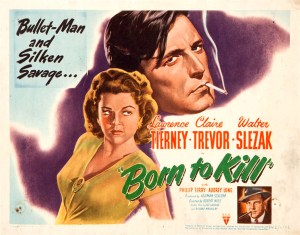 Elisha Cook Jr. arrives at the Ferry Building on a mission to kill in the 1947 film ‘Born to Kill’, also starring Laurence Tierney and Claire Trevor. Ferry service to the Ferry Building has been considerably reduced since the outbreak of the COVID-19 virus. 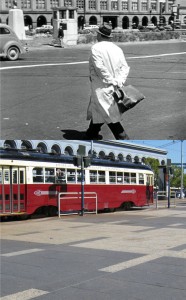 Shady detective Walter Slezak crosses the Embarcadero from Market Street to leave San Francisco by ferryboat after reading in the paper of the violent deaths of the people he was investigating at the end of ‘Born to Kill’. “The way of the transgressor is hard.” he quotes from the bible as he leaves. My picture may have been better without the F Line streetcar in it, but now that they aren’t running I miss them and it’s okay.

The opening scenes from the 1950 movie ‘Experiment Alcatraz start with a view of the skyline and piers south of the Ferry Building from under the Bay Bridge. All of these piers have been demolished now. This is an interesting oddity about an experiment by the army with convicts from Alcatraz Prison that goes wrong.

“Speedy’s” Market, just visible on the left, on Union and Montgomery Streets in the 1951 film ‘The House on Telegraph Hill’ starring Richard Basehart, Valentina Cortese, and William Lundigan: I’ve posted this before, but I’m reading another one of Herb Caen’s wonderful books, ‘One Man’s San Francisco’ from 1976, and he has an interesting passage about Speedy’s, that made me miss the tiny market, which closed in 2007 after ninety years. I’ll include his passage below.

{Also that day, playwright Lillian Hellman, who wrote The Little Foxes among other classics, walked into Speedy’s old grocery on Telegraph Hill, another timeless landmark on the Saroyan map. She had just moved into a nearby penthouse (she was lecturing at UC-Berkeley at that time) and wanted to establish credit. “You’ll have to fill out the usual form.” said George Atashkarian, the Armenian who owns Speedy’s. “But I’m Lillian Hellman,” protested the playwright. “That doesn’t mean too much to me,” said George. “Look, I’m George Atashkarian, does that mean anything to you? “No,” said Miss Hellman. “I see what you mean.” She trudged back to her digs and returned with a clipping of a newspaper interview with her picture. She got the credit. And the clipping is now tacked to the wall of Speedy’s.} 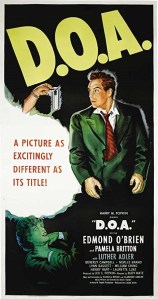 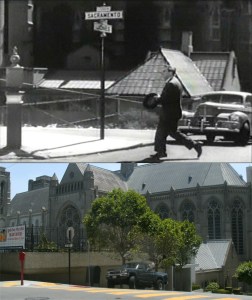 Edmond O’Brien crosses the intersection of Jones and Sacramento Streets on Nob Hill and stumbles into a medical clinic after learning that he’s been poisoned in the 1950 film ‘D.O.A.’. Grace Cathedral is in the background.

The view down California Street past the Fairmont Hotel in the 1949 film ‘Impact’ starring Brian Donlevy and Ella Raines:

The same view as the previous picture but in the middle of California Street (you get a clearer view of the Cirque Room at the Fairmont Hotel, as well) from the 1958 movie ‘The Lineup’ starring Eli Wallach:

Also from ‘The Lineup’, the entrance to Sutro’s Museum, and the best look on film of the old Sutro Bathhouse: The car parking in front of the bus contains killer Eli Wallach, his partner Robert Keith, and a woman and child that they’ve kidnapped.

Glenn Ford, being chased by the police, turns into Genoa Place from Union Street in the 1949 film ‘Mr. Soft Touch’. You get a better view of Russian Hill in the background from out in the street here today.

An auto containing lovely Joan Bennett races to the end of Pier 4 in the 1940 movie ‘The House Across the Bay’. This was not the same Pier 4 that was south of the Ferry Building on the Embarcadero. In the background are the Maritime Museum, Ghirardelli Square, and Aquatic Park. You can see the curve of the Van Ness Municipal Pier behind Pier 4 in the background of the film shot. Pier 4 has been deemed unsafe and is off limits now. I took my photo from the Van Ness Pier.

In the previous picture, Joan Bennett was hurrying to say goodbye to her lover George Raft on Pier 4, who was being taken by boat to Alcatraz Prison. She was late and missed to boat. Because the pier is closed, I took my picture at the beginning of the pier, looking out to where Joan was standing. This was the pier where convicts and visitors were taken by boat out to Alcatraz Island. The building on the left was where prisoners waited under armed guard for the boat that would take them out for their stretch. It’s an historic area of San Francisco and I hope the old pier can be saved.