The origin of the word nabob come from the early 17th Century and refers to individuals who returned to England from India after acquiring a fortune from there. In San Francisco, the word had a slightly derogatory usage referring to the “snobbish” upper class citizens living in opulence up on “Nabob” Hill. By the mid 19th Century, the hill official became Nob Hill, which is probably better than Nabob Hill. Today, it still has the aura of the well-to-do, but unlike Pacific Heights, much of the hill is open to the public. These are a collection of pictures from the mid to late 19th Century showing different views from “Nabob” Hill, most of which are still breathtaking today. We’ll start at Jones Street and end up on Stockton Street

Clay Street, looking east from Jones Street in 1875: Yerba Buena Island can be seen on the left in the vintage picture. (opensfhistory.org)

Mason Street, up from Clay Street, in 1865: Angel Island is in the distance, Russian Hill is on the left. I wonder what that structure on top of Russian Hill was. Maybe that’s where they got the idea for Lombard Street. (opensfhistory.org) 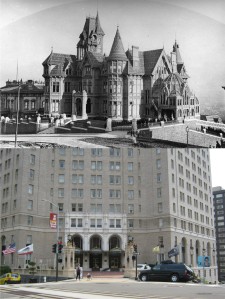 The Mark Hopkins mansion on the corner of Mason and California Streets: By nature, I’m inclined to think that nobody ever needed a house that big. (SF Chronicle)

“Hey, kids! Why don’t you go play in some other room of the house, huh?” 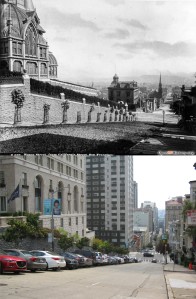 The view past the Hopkins mansion, south down Mason Street, circa 1888: (opensfhistory.org)

Looking east down Sacramento Street from Powell Street in 1865: Arnold Genthe would later take one of the greatest pictures in photographic history from this spot in 1906 during the San Francisco Earthquake and Fire. (opensfhistory.org)

Looking southeast down California Street from Mason Street in 1870: The church at the bottom of the hill was named Grace Church. It was destroyed during the 1906 earthquake and rebuild as Grace Cathedral further up Nob Hill.

Looking east on California Street approaching Stockton Street in 1891: Grace Church is on the right.

An undated picture, probably taken after the 1860s, looking north along Stockton Street: Alcatraz Island can be seen in the vintage picture. My comparison photo was taken on top of the Stockton Tunnel.