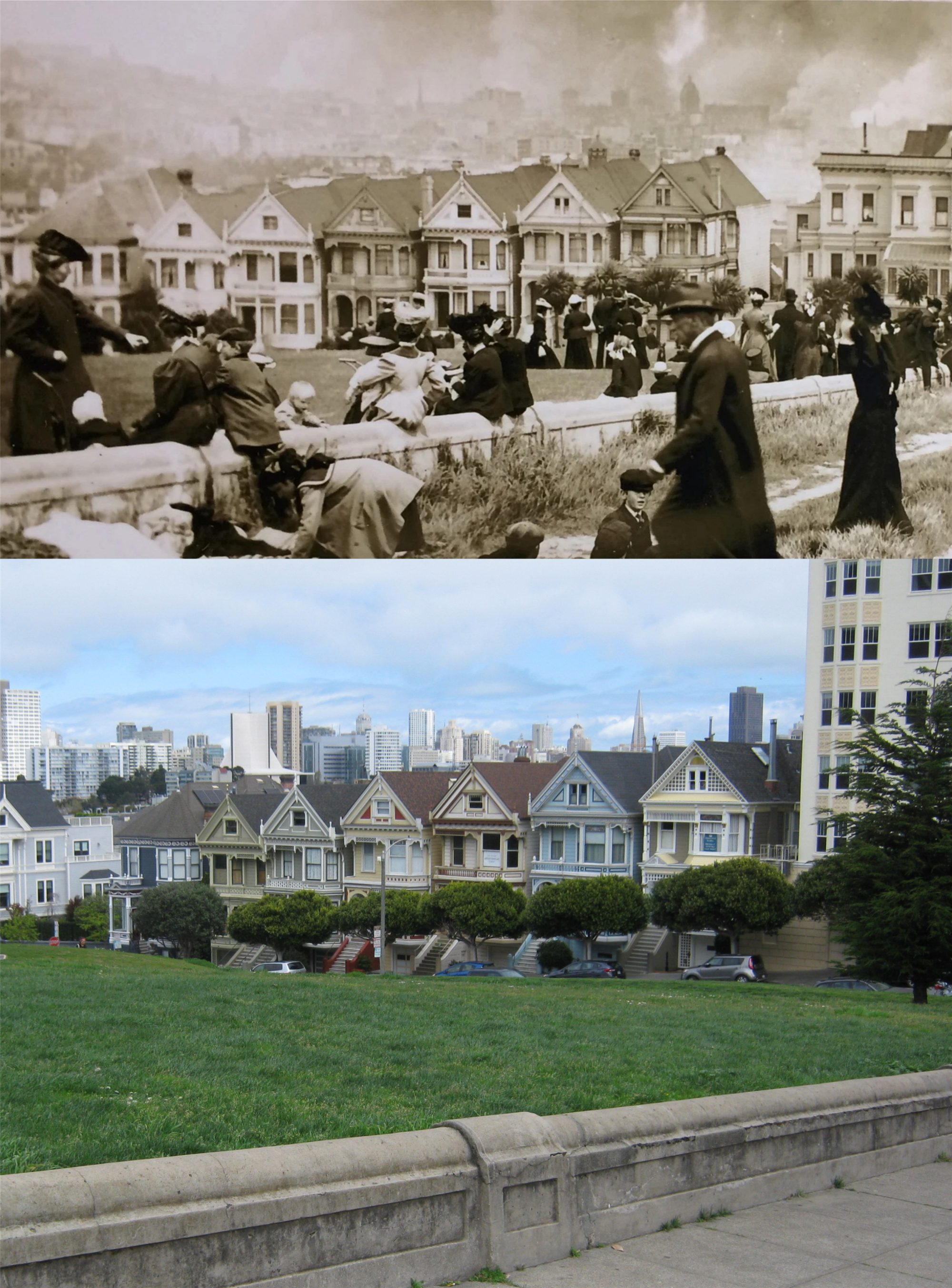 This morning I thought I would try to visit the new Trans Bay Terminal that opened up this weekend, south of Market Street. I was going to park at Fisherman’s Wharf and take either a cable car or streetcar back downtown to the terminal. There’s a nightmare of people coming in to Fisherman’s Wharf on a weekend morning in the summer but not a lot leaving, so, it seemed like a good plan. These comparison pictures are more now and thens, rather than then and nows, I took my photos first and then looked for vintage comparison pictures when I got back. As often, I relied on the wonderful site, http://opensfhistory.org/ where most of these vintage photos are from, and they never let me down. I took most of my pictures through the back windows of an old and beautiful street car built in 1928; the windows were probably just as old. 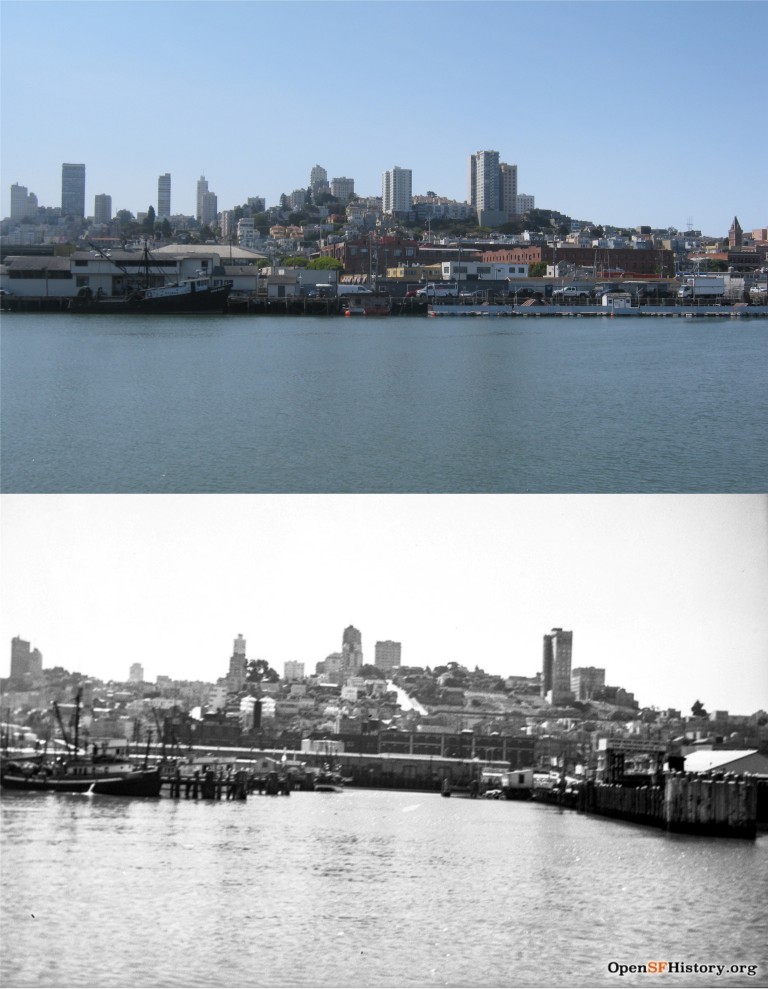 I parked in Pier 45 at the Wharf. Sometimes I can get a parking pass there, and that’s worth gold in the summer for parking at Fisherman’s Wharf. This is the view from the west side of Pier 45 today and in a rather blurry image from 1935. I probably could have got a perfect line up, but I didn’t want to cut out the Ghirardelli Tower on the right in my picture.

A cable car was my first choice, but it was 8:30 AM when I got to Fisherman’s Wharf, and the cable cars don’t run until 10:00 AM. I was taking a couple of pictures at Jefferson and Taylor Streets when an inspiration from Milan, Italy, the old #1895 streetcar built in 1928, rattled past. The bottom picture is the same spot in 1937. 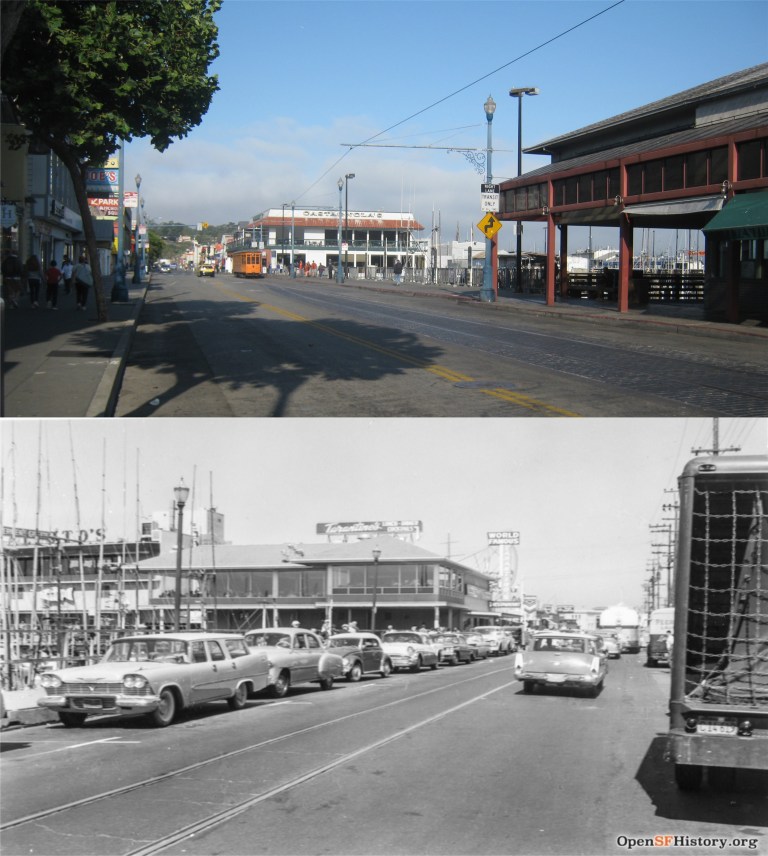 The F Line of vintage streetcars that travel along the Embarcadero and Market Street was running, so I figured that if I ran fast enough I could catch it. This is a reverse then and now looking to and away from Taylor street past the Fisherman’s Wharf Lagoon on Jefferson Street today and in 1960. 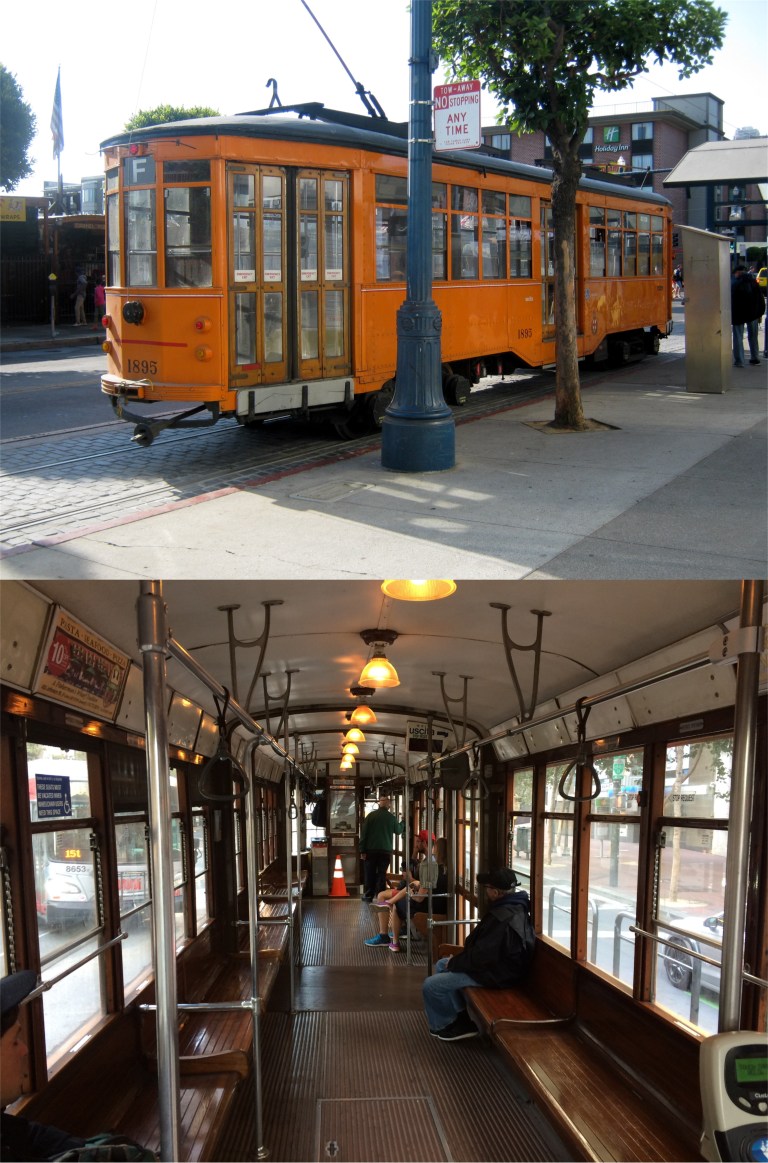 How was I to know that the motorman was going to take a ten minute brake at the stop? Oh, well, good exercise! I stood at the back of the car where the letter F is to get my pictures. You can see from the bottom photo there aren’t a lot of people heading away from the Wharf in the morning. Before long, “Clang, clang, clang, went the trolley.” and I was off, sans a high-starched collar and high-topped shoes like Judy Garland wore. 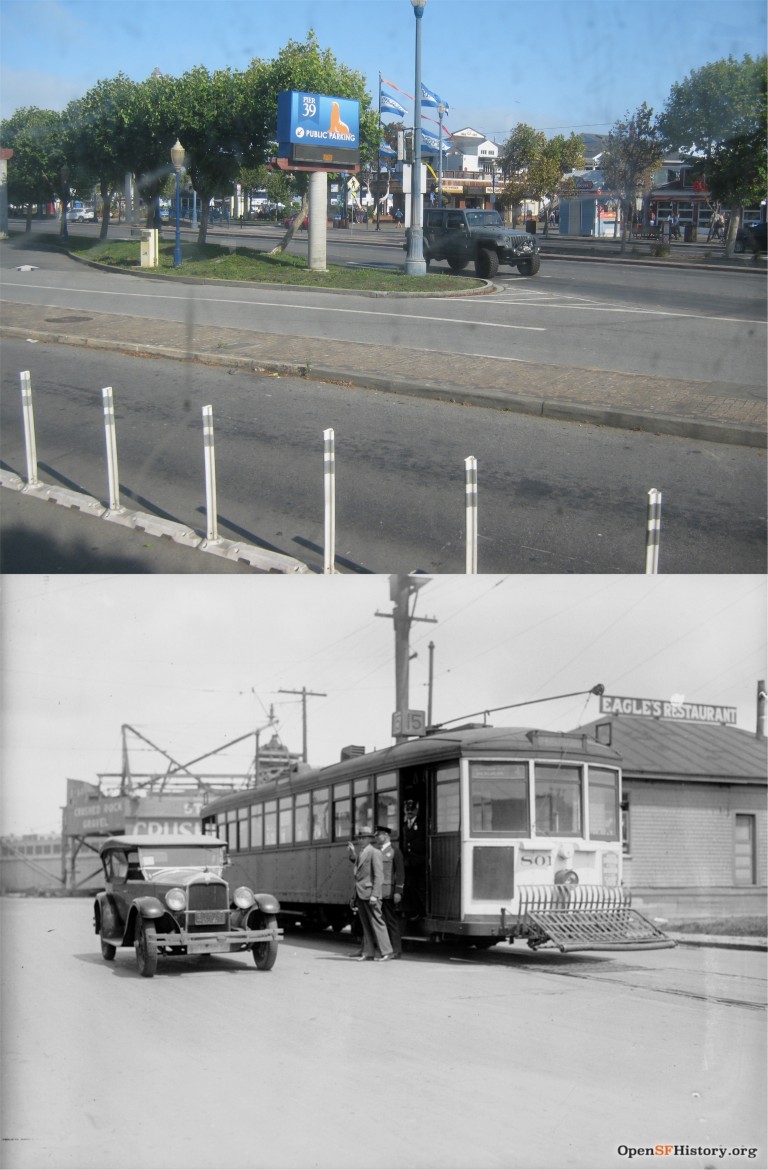 This is where Beach Street approaches the Embarcadero today and in 1930. Notice the Eagle’s Restaurant. When Pier 39 was demolished in 1978 for the amusement center that’s there today, they decided to save the old café, which was going to be torn down for a garage, and moved it across the street to the second story of Pier 39. It’s the white peaked building in the right center of my picture. 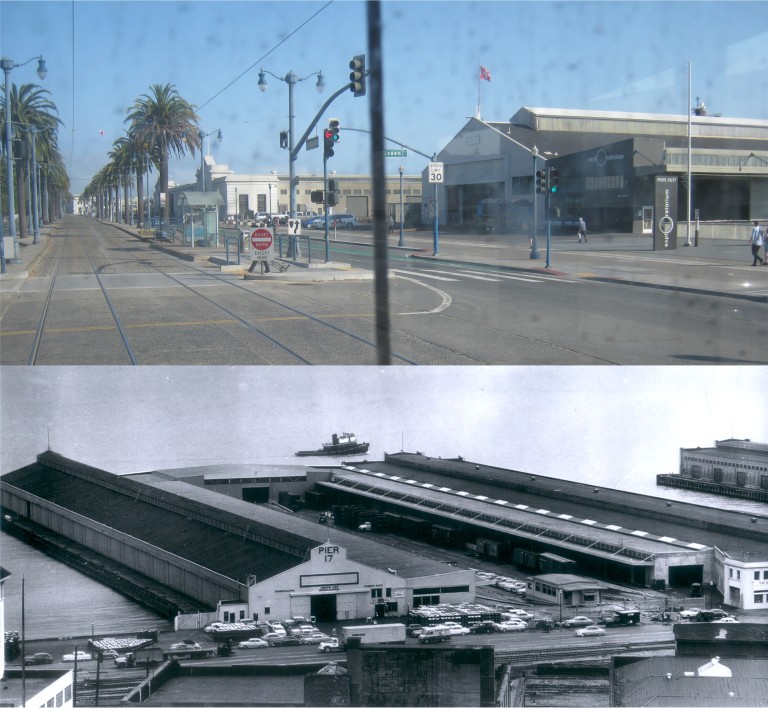 We’re rolling down the Embarcadero past Pier 17, where the Exploratorium is now housed. The bottom picture is Pier 17 seen from Telegraph Hill in 1957. (San Francisco Library History Center) 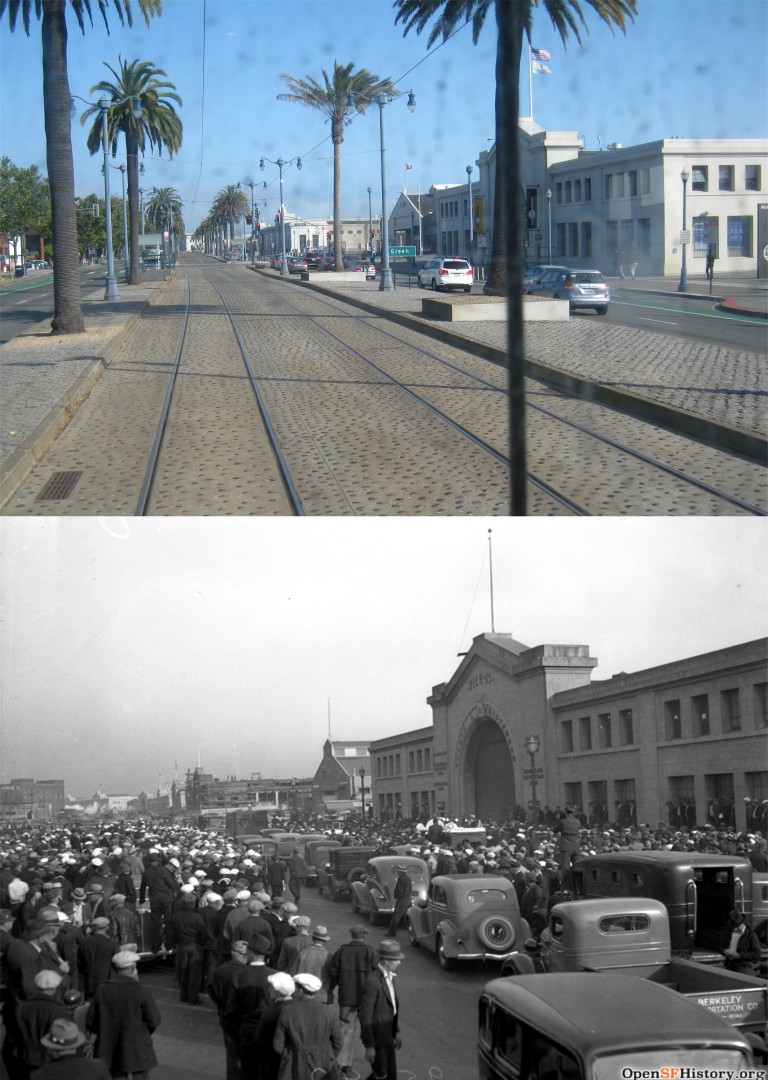 We’ve passed Pier 15 and Green Street, where an organized labor strike was happening in 1937 in the bottom photo. 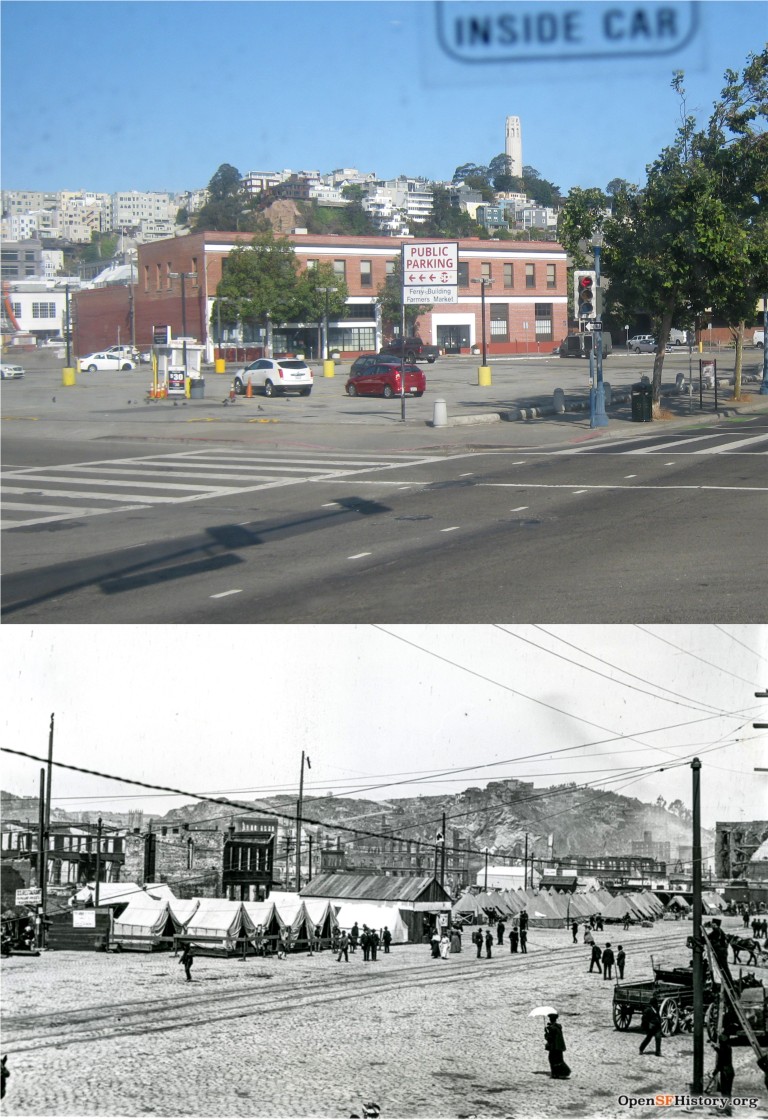 This is where Broadway comes into the Embarcadero looking toward Telegraph Hill. The bottom picture was taken just after the 1906 Earthquake and Fire. 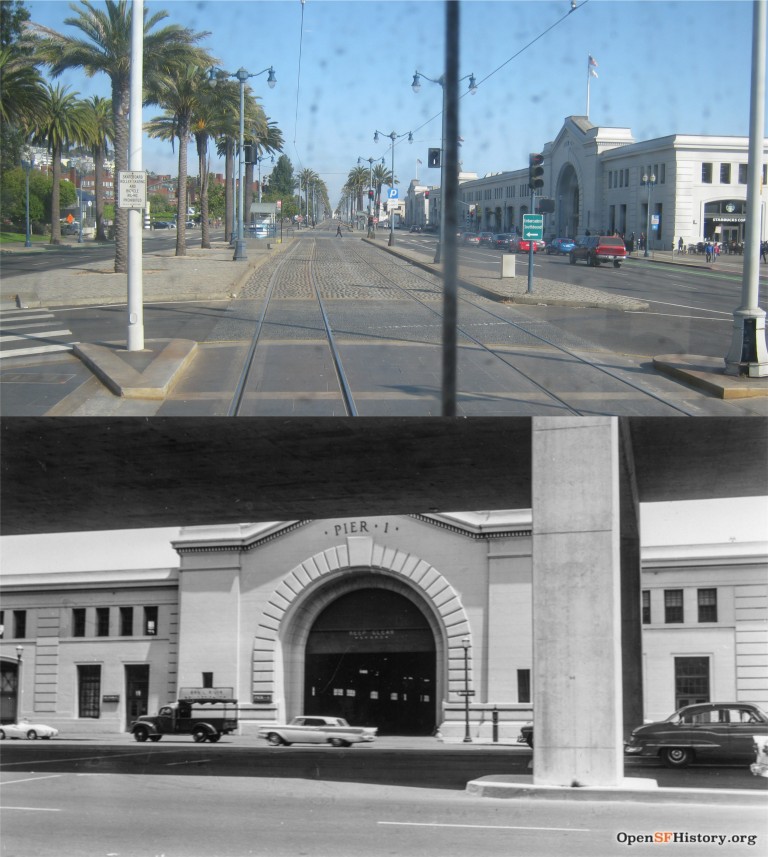 Now we’ve passed Pier 1 as we near the Ferry Building. If we were at this spot in 1960, like in the bottom picture, we’d be directly under the Embarcadero Freeway. 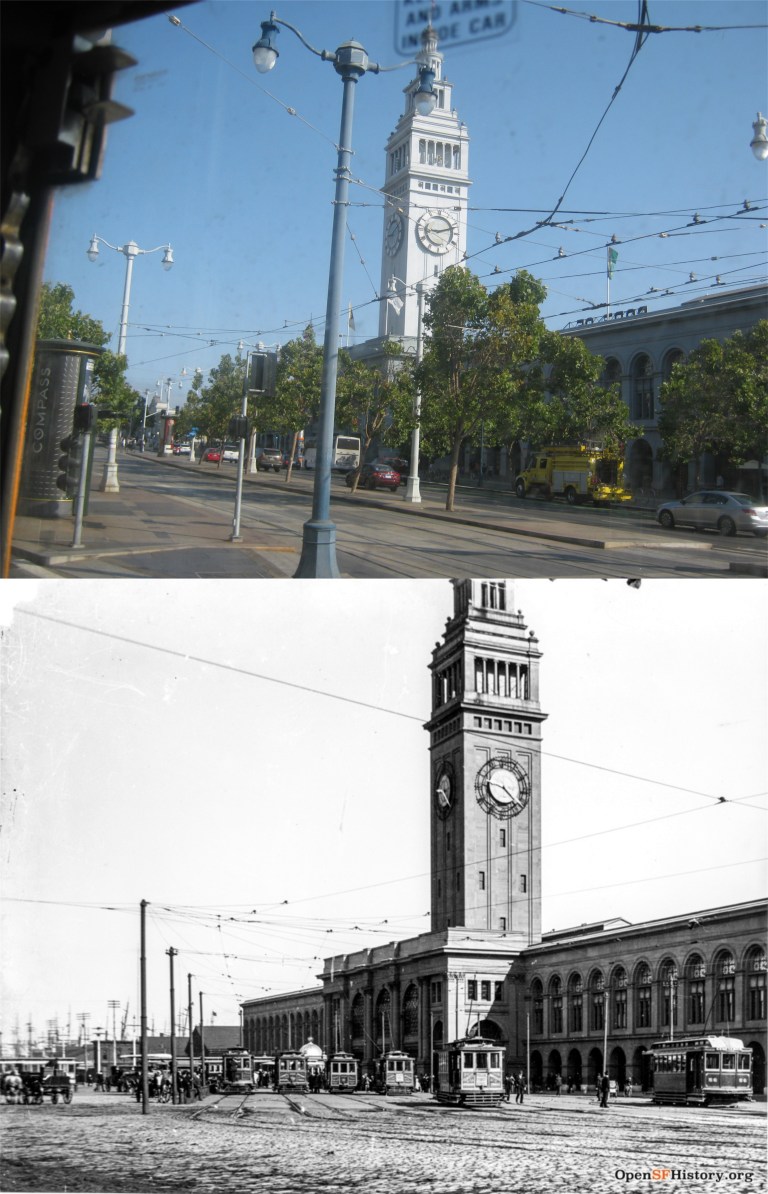 As we rattled past the Ferry Building, something inside my subconscious mind was telling me to keep my head and arms inside the car. The bottom picture was taken in 1905. Look at all of the streetcars in front of the Ferry Building. They look like cable cars but they’re not; they only have two tracks and no middle slot. 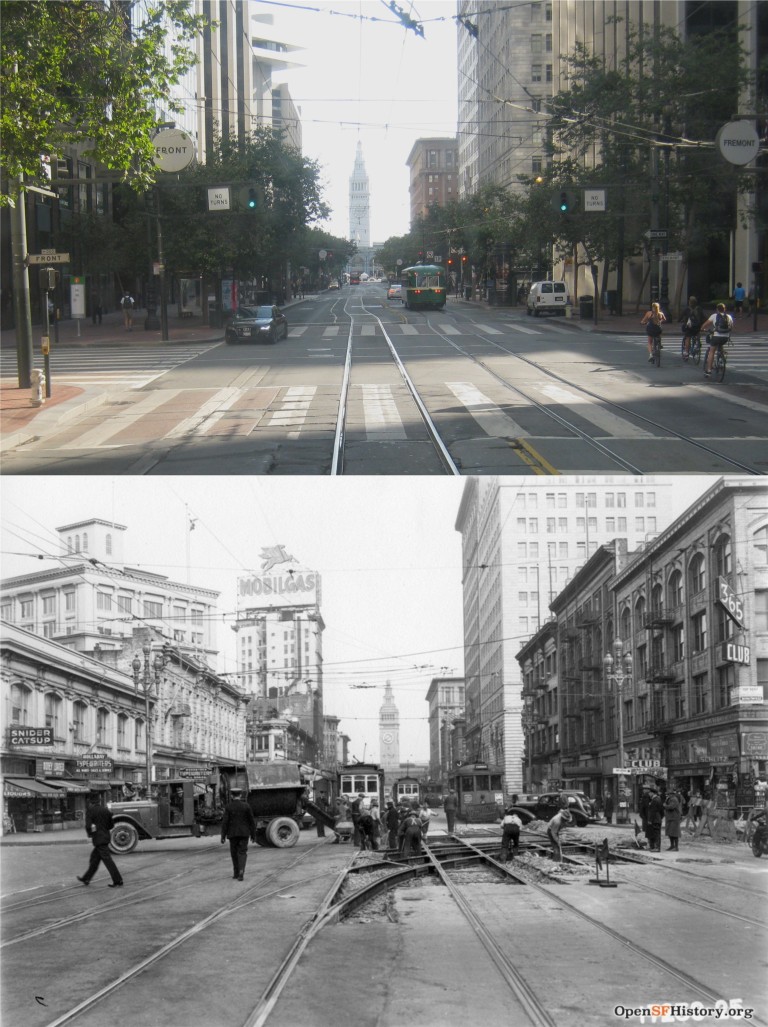 When we rounded the turn to Market Street I got off where Front and Fremont Streets merge into Market to head over to see the new Trans Bay Terminal, but that idea didn’t fly! “There are 894,363 people in the naked city” and every one of them decided to visit the new transportation center too, while all of the out-of-towners were at the Outside Land Concert. I’ll get around to it. The bottom photo was taken at this spot in December of 1938.