The Barbary Coast Trail walking tour, established in May of 1998, was created by the San Francisco Historical Society and historian Daniel Bacon, a member of the society. It follows north to south, from Aquatic Park to the old U.S. Mint Building on 5th Street, or south to north from the Mint to Aquatic Park, whichever is preferred. It trails through much of old San Francisco, and at times travels along the original shoreline. The entire trail can be followed on the old McQuillan map from 1878 below. Our tour will follow the south to north route. Some references suggest that you can take this tour all in one day. I broke it up over three days and I still felt old and tired when I finished, although, I enjoyed every step of the way! So put on some comfortable shoes and kick back, you’re in for a long armchair walk! 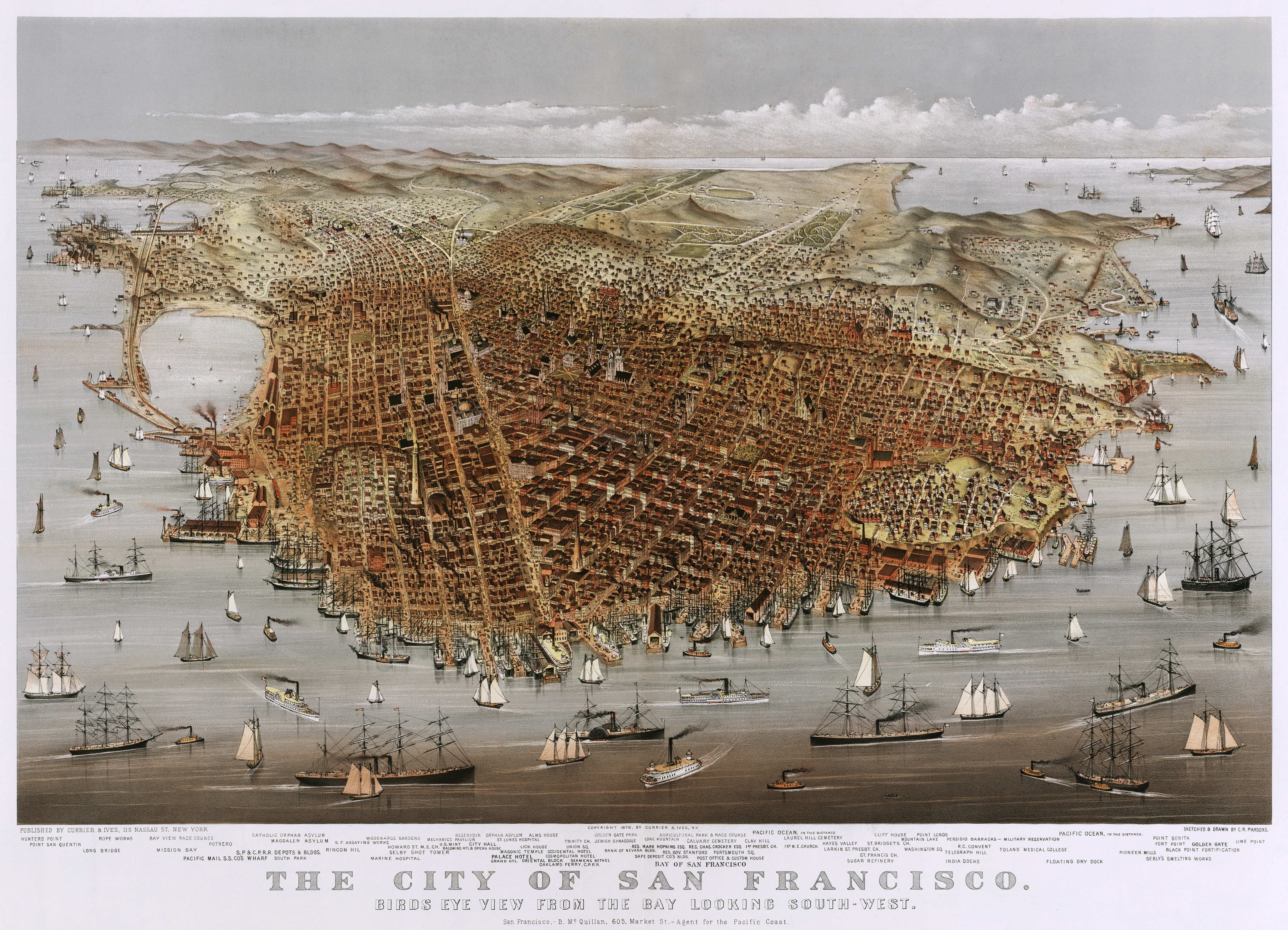 Beginning at the old Mint Building on 5th and Mission Street the trail moves north along 5th to Market Street. (SFGate)

Along the way, you’ll spot gold medallions placed in sidewalks along the trail like this one at the Mint Building. The medallions have an arrow pointing toward the direction of the Barbary Coast Trail. I’ll have more on these later in the post.

The trail crosses Market Street and heads up Powell Street to Union Square. The cable cars at the Powell Street turntable were temporarily shut down when the vintage picture was taken. The photo looks like the 1970’s so I don’t think that this was during the big shut down from 1982 to 1984.

We’re now at Union Square across from the St. Francis Hotel.

Moving through Maiden Lane we turn left onto Grant Avenue. Maiden Lane, once called Morton Street, was an alley filled with brothels before the 1906 Earthquake.

Along Grant Avenue we’ll cross Sutter Street where the old Whitehouse Department Store was located. Our view is from Sutter Street looking east toward Grant.

At the next block we arrive at the official entrance to Chinatown at Bush Street. In 1983 I took the top picture looking back down Grant Ave. toward Sutter Street. The Whitehouse Store had not yet become the Banana Republic.

We’ve entered Chinatown and we’ll head north past where the old postcard was taken.

The trail moves into Waverly Place, seen here from Clay Street in 1938 when a cable car line ran along Clay.

From Waverly place we’ll head into once notorious Ross Alley, long ago famous for Shanghaiing, Tong Wars, and prostitution cribs. Seen here in Arnold Genthe’s vintage photo from before the 1906 Earthquake and Fire, the alley is quaint and peaceful today. The building the gentleman is looking into in my picture is the Golden Gate Fortune Cookie Factory where you can have your own fortune baked into a cookie.

From Ross Alley we’ll double back to Washington Street and Grant Avenue. The medallion on the northwest corner of this intersection has two arrows. These are the medallions placed between the two origination points of the Barbary Coast Trail directing visitors traveling either north along the trail or south.

The trail passes through the old Portsmouth Square. We are now in some of the oldest settled areas of San Francisco and near the original city shoreline. The vintage photo is another Arnold Genthe picture taken at Portsmouth Square.

We’re going to turn north onto Columbus Avenue from Pacific and head north, or more accurately, northwest. Look back at the old Sentinel Building, also known as Columbus Tower, completed in 1907. The vintage picture is from the Charles W. Cushman Collection.

We’re going to travel along Columbus Avenue, seen here at Columbus and Stockton Street, and head toward Washington Square. I couldn’t get the most accurate lineup with the OpenSFHistory picture because of the construction, but you can still see the steeples of Saints Peter and Paul Church in the background of my picture.

Washington Square at Saints Peter and Paul Church: The famous San Francisco Chronicle columnist Herb Caen once quoted something to the effect, “Washington Square, which is not a square, has a statue of Benjamin Franklin not George Washington, and is located in North Beach where there is no beach!” From Washington Square we’ll head up to the top of Telegraph Hill.

A 1926 picture from the Shorpy Historic Photo Archive shows the old urn balustrade that circled the parking lot where Coit Tower is today. The balustrade was considered unattractive and removed by the end of the 1930’s.

We’ll head back down Lombard Street from the top of Telegraph Hill. In  October of 1983 I took the above two  pictures of the Parade of Ships for Fleet Week from here on Lombard Street when there was a greater navy presence for the occasion. These are two perfect photos for today’s November 11th posting.

From Telegraph Hill the Barbary Coast Trail takes you down to the Embarcadero, probably my favorite street in San Francisco. There’s just something magical to me about the shipping history, the fog, and the film noir like setting of this street. The foggy vintage picture is from the great photographer Fred Lyon.

After leaving the Embarcadero the Barbary Coast Trail travels along Jefferson Street past Fisherman’s Wharf and where the old Joe DiMaggio Restaurant was located. (Gordon Clark)

We can’t pass by here without stopping at the Fisherman’s Wharf Boat Lagoon. The vintage picture is on the wall of Alioto’s Restaurant, seen in both photos.

We’re nearing the end of our journey. These two photos were taken at the Hyde Street Pier from the ferryboat Eureka looking over to Aquatic Park across the 1895 schooner C.A. Thayer. The top picture is from a slide I took in 1985 from the third deck of the Eureka. Yesterday’s photo was from the second deck, the third deck being closed off now.

The trail ends (and begins) at Aquatic Park. We’re looking at the Hyde Street Pier from behind the Maritime Museum. My 1985 slide looks very similar to the picture that I took yesterday. The 1886 square-rigger Balclutha has been relocated to the Hyde Street Pier since my 1985 picture but is temporarily away from the pier in dry dock for repairs at the current time.

We’ll end on the steps behind the Maritime Museum. I don’t remember what was going on in 1985 when I took the top slide picture, and I don’t know who the girl dancing was, but it must have been a fun day!