No, it hasn’t been thirty four years since I visited Telegraph Hill, the vistas from the hill are staggering and I get up there as often as I can. These are just some 1983 and yesterday pictures of mine from up there thirty four years apart. In a February of 2016 post about Telegraph Hill I commented that when I do comparison pictures from a long ago photo I sometimes wonder a little about the photographers who took the vintage shot. Who were they? What were they thinking when standing in the same spot so many years ago? What was going on in his or her life at the time? Did they linger and reflect on the beauty of the view as I sometimes do? It’s probably a sign of old age, but when I do then and nows on my own pictures, I sometimes think the same thing!

We’ll start at Vallejo and Montgomery Streets looking east. I’m trying to figure out what that giant grasshopper with wheels looking thing was next to the ALL VEHICLES OVER 3 TONS PROHIBITED sign on the right in my old picture.

Now, here’s an interesting development. When I took the top picture looking south down Montgomery Street from Telegraph Hill in 1983 the camera was leaning slightly to the left. When I took the update in the bottom picture yesterday, I’m leaning a little to the right. However, I don’t think that this has anything to do with my political viewpoints.

Calhoun Terrace looking east, one of those special views that a lot of people don’t know about: This was back when they painted the piers mellow yellow and baby blue. Down on the Embarcadero where that round see-through sculpture is located is where the Exploratorium is now. The Embarcadero still had a lot of that look of sea going-far away places and intrigue about it back then. Let’s get a little higher up now; we’ll take a trip to the top of Coit Tower. 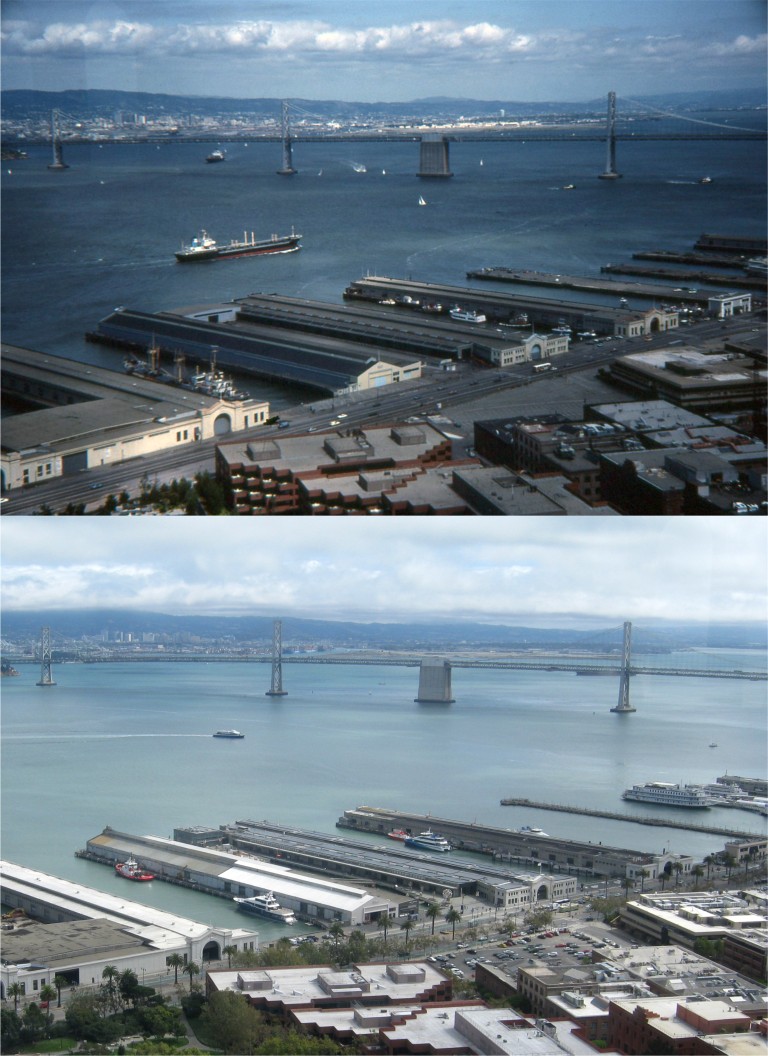 A 1983 view of the Embarcadero and the Bay Bridge: A tanker ship was sailing into the Bay, possibly from some far away location like Sumatra or Bora Bora, or even a more exotic place like Los Angeles!

Zooming in closer to the city shows very little noticeable change in 34 years other than the removal of the Embarcadero Freeway.

Easily the best view of Downtown San Francisco then or now is from this side of Coit Tower. The story goes here that when the skyscraper boom in San Francisco during the 1960’s was underway the developers wanted to continue as far north as possible. The residents of Telegraph Hill did not want their view of the Bay, the waterfront, the Bay Bridge or the Ferry Building to be blocked. They petitioned City Hall and got the northward skyscraper development stopped. I think the city of San Francisco owes them a debt of gratitude. Now the only thing that will block the views of San Francisco from Telegraph Hill is the fog, like it was trying to do yesterday.