When I have a bunch of pictures that I want to post and I can’t find a connecting theme, I just put them on the blog on a Thursday and declare it Themeless Thursday.

The Ferry Building in 1915 and in 2015, both years commemorating the 1915 Panama Pacific Exposition:

The Fisherman’s Wharf Lagoon during World War Two: I’m not sure why it was a restricted area by the U.S. Army and I wonder if the photographer was arrested. Also, I didn’t notice that little Minnie Mouse like doll on the pier when I took my picture. Good advertising for the sport fishing company that berths here! (Vintage picture from SF Chronicle)

“Painted Ladies” and a pretty lady at Alamo Square: The top picture taken after the 1906 Earthquake and Fire is hanging on the wall near the earthquake exhibit at the California Academy of Sciences.

A Totem pole at the Cliff House in 1983: There’s still a totem pole near this spot, but it doesn’t look like the same one, and when a totem pole has a nicer smile than mine I know it’s time to stop taking selfies. 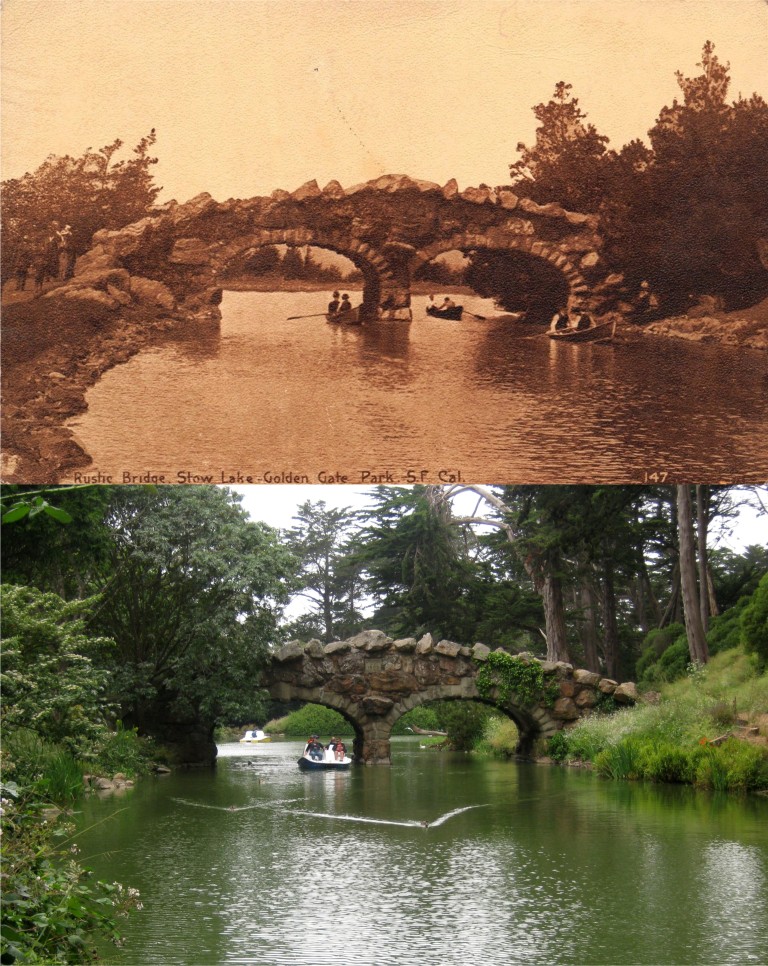 The old Rustic Bridge at Stow Lake in Golden Gate Park was ERECTED AD 1893, and it’s as peaceful of a setting as you’ll find in San Francisco. A couple of movies have filmed scenes here, “Fatty” Arbuckle’s ‘Wished on Mabel’ in 1915, and ‘Scaramouche’ in 1952.