It sits on the northeast corner of what is probably the most photographed intersection in San Francisco, Grant Avenue and California Street in Chinatown. That’s not a bad location! Founded in 1854 in the most ungodly section of San Francisco, the “Cathedral on California Street” is still there today, although the brothels, opium dens, and shanghaiing days of Chinatown are long gone. While I don’t always “Observe the Time and Fly from Evil” when I’m in San Francisco, I stop in at Old St. Mary’s regularly if I’m in the area. It’s a holy and peaceful place to pray or meditate or to just admire the beauty of the church no matter what your denomination or religious beliefs are. It’s also as historical as any location in San Francisco, visited by such notables as Emperor Joshua A. Norton and Madame Chiang Kai-shek.

Four images of the church: The top photo is Old St. Mary’s before the 1906 Earthquake and Fire. The church survived the earthquake in relatively good shape but was gutted by the fire that destroyed most of San Francisco, as seen in the second picture. The third photo is a rebuilt St. Mary’s in 1951 and the way the church looks today is the bottom picture 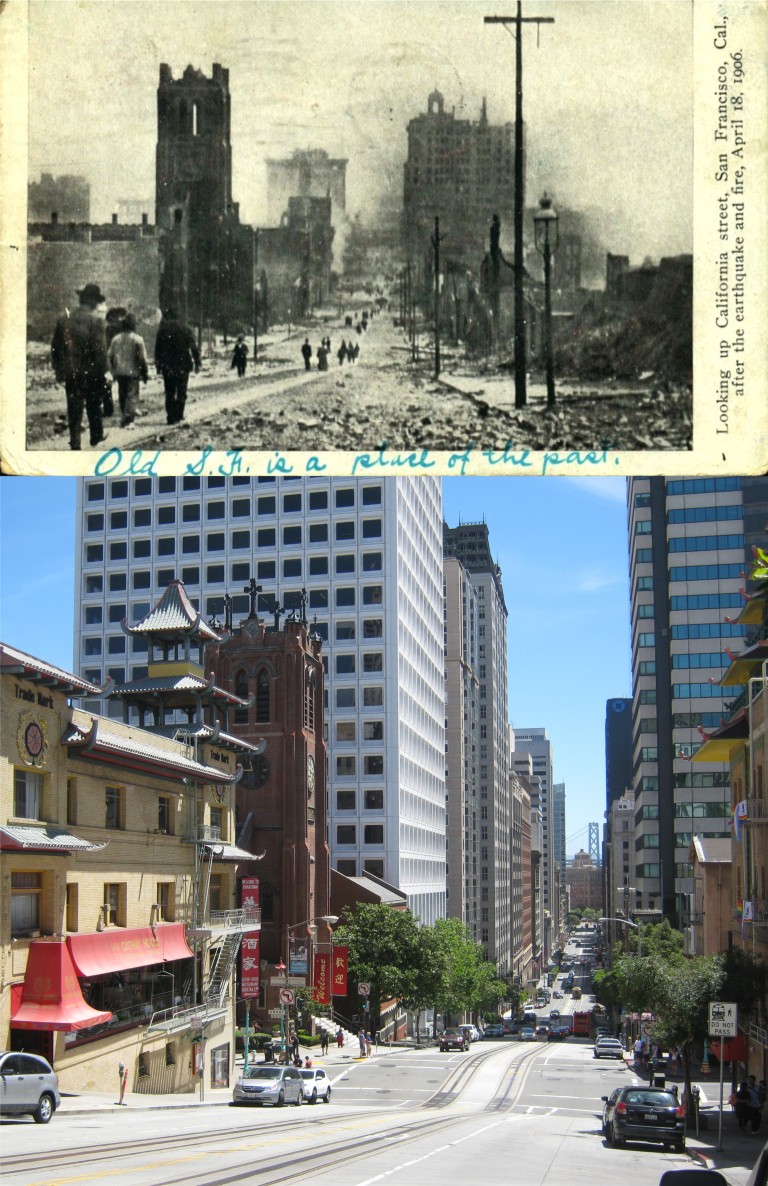 Looking down toward Grant Avenue and a burned out St. Mary’s from the south side of California Street: “Old S. F. is a place of the past.” That was probably true; the tong wars and opium cribs of Chinatown were gone, some of the corrupt politicians that ran the town would be forced out of office or put in jail, and Bank of America was founded by a. P. Giannnini. (I used to work for them so I thought I’d throw that in.) Have you spotted the goof up yet? The picture isn’t looking up California Street, but down California Street. 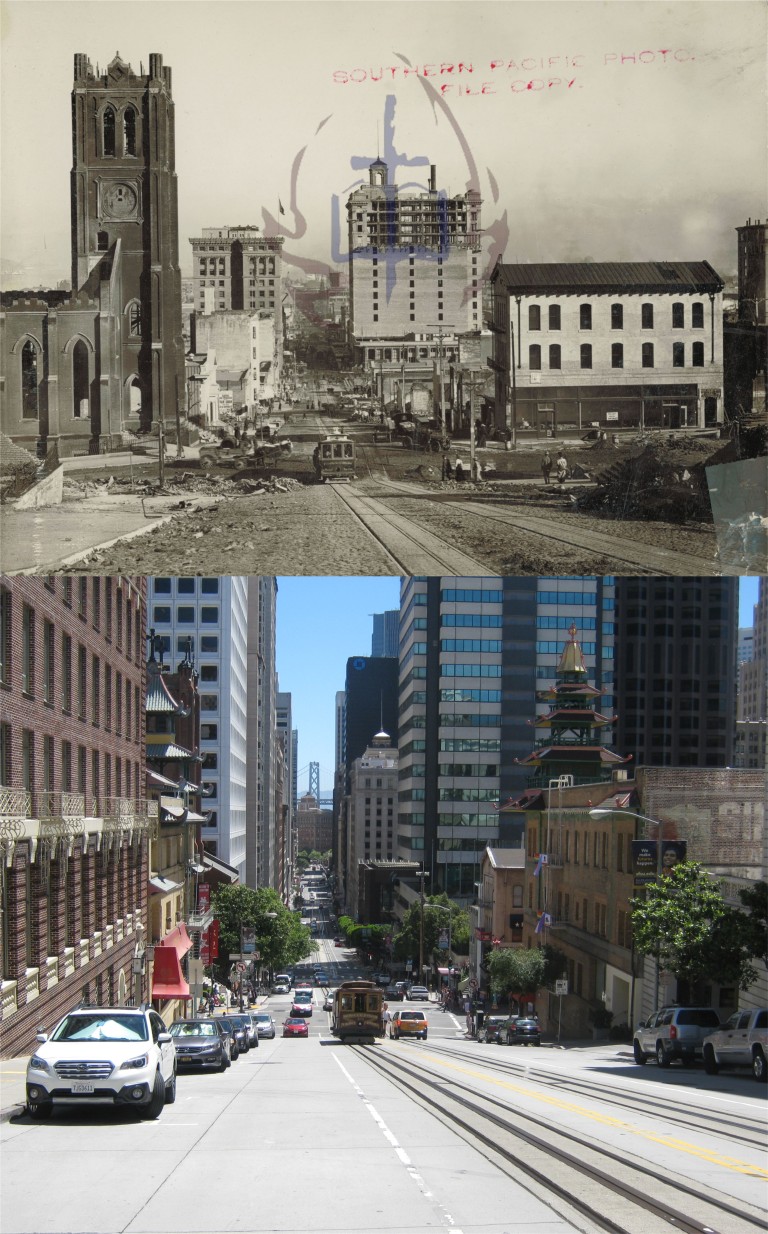 A photo from the Old St. Mary’s Church website shows the beginning of the rebuilding of San Francisco from the north side of California Street, although, St. Mary’s is still in ruins. 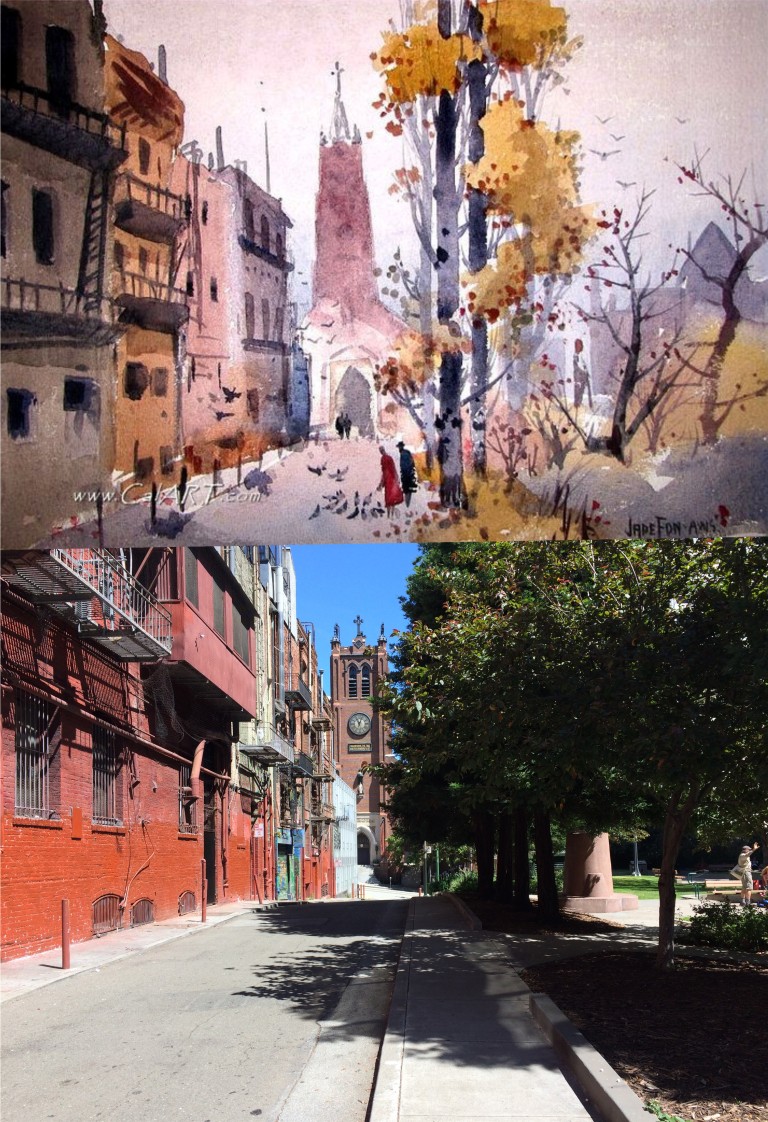 Jade Fon was a artist that I learned of when researching for this blog post. He painted a number of images around Chinatown in the 1940’s and 1950’s, but I haven’t learned the date of this painting from the CalArt.com collection I found on Pinterest. Jade took a little artistic license here with his image of St. Mary’s from Quincy Alley that runs past St. Mary’s Square between Pine and California Streets, but that’s okay. You can see Beniamino Bufano’s statue of Sun Yat-sen in St. Mary’s Square on the right in the painting. Only the pedestal of the statue can be seen through the trees from here today.

The statue of Sun Yat-sen in 1959 and today:  (Vintage photo by Fred W. Clayton) 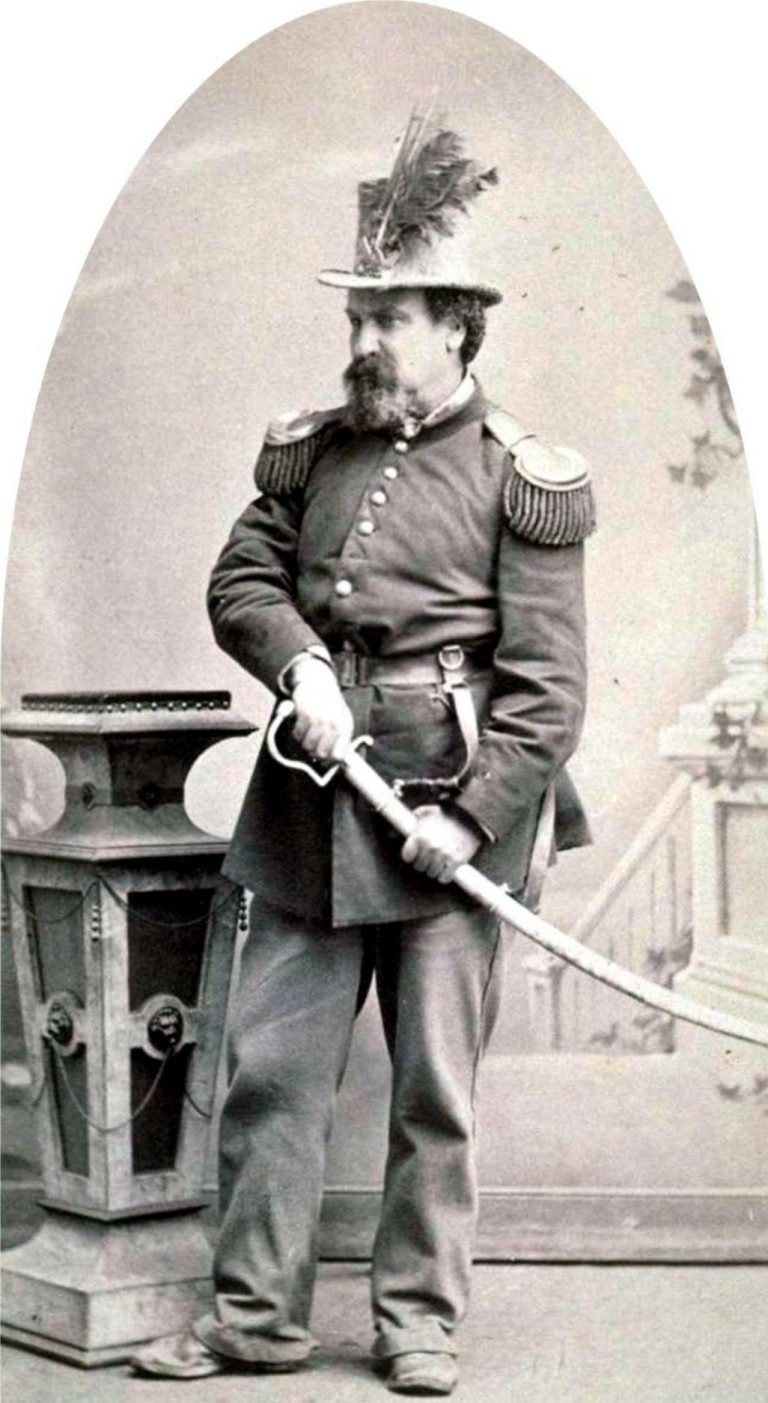 One of San Francisco’s legendary figures, “Emperor” Norton collapsed and died during the period of his “reign” In front of St. Mary’s on the corner of California Street and Grant Avenue, (then called Dupont Street) in 1880. 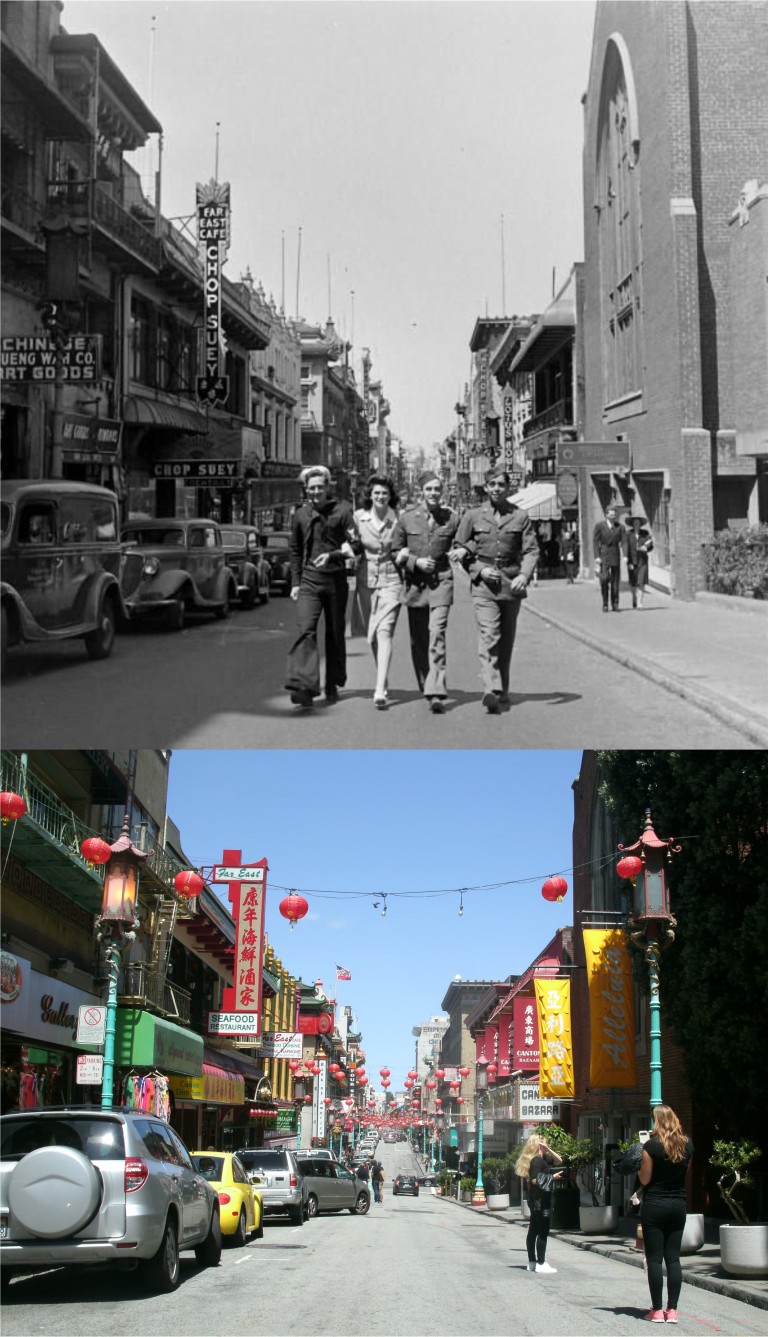 A picture at the west side of St. Mary’s on Grant Avenue taken in 1943 during World War Two from a blog entry I posted in October of 2016: 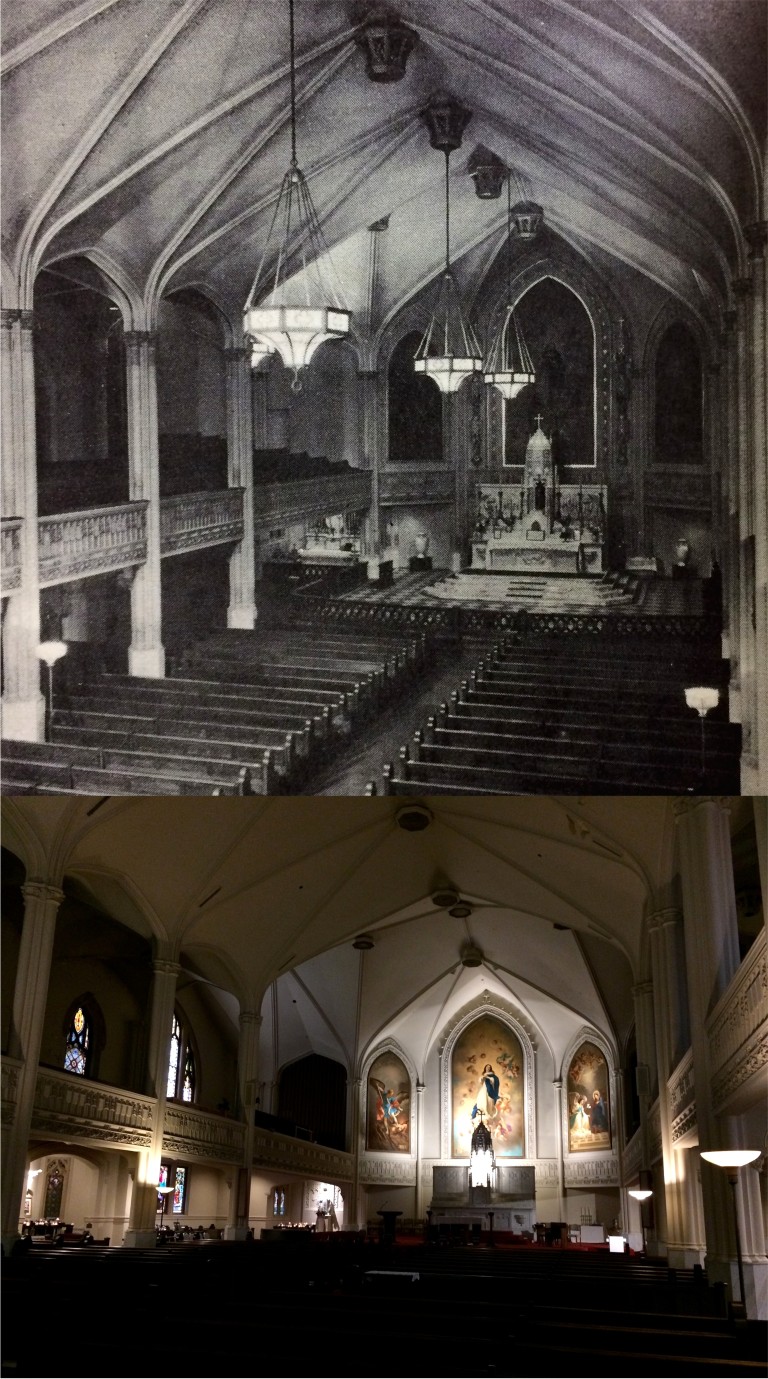 Inside St. Mary’s Cathedral in 1927: I couldn’t get a picture from the balcony because it was locked but it’s still just as impressive from pew level.