This one is for England. My grandmother was born in Liverpool. My visit to England years ago was one of the highlights of my life. After the United States, I get more visitors to my blog from England than any other country. I’m thinking about the people over there today. 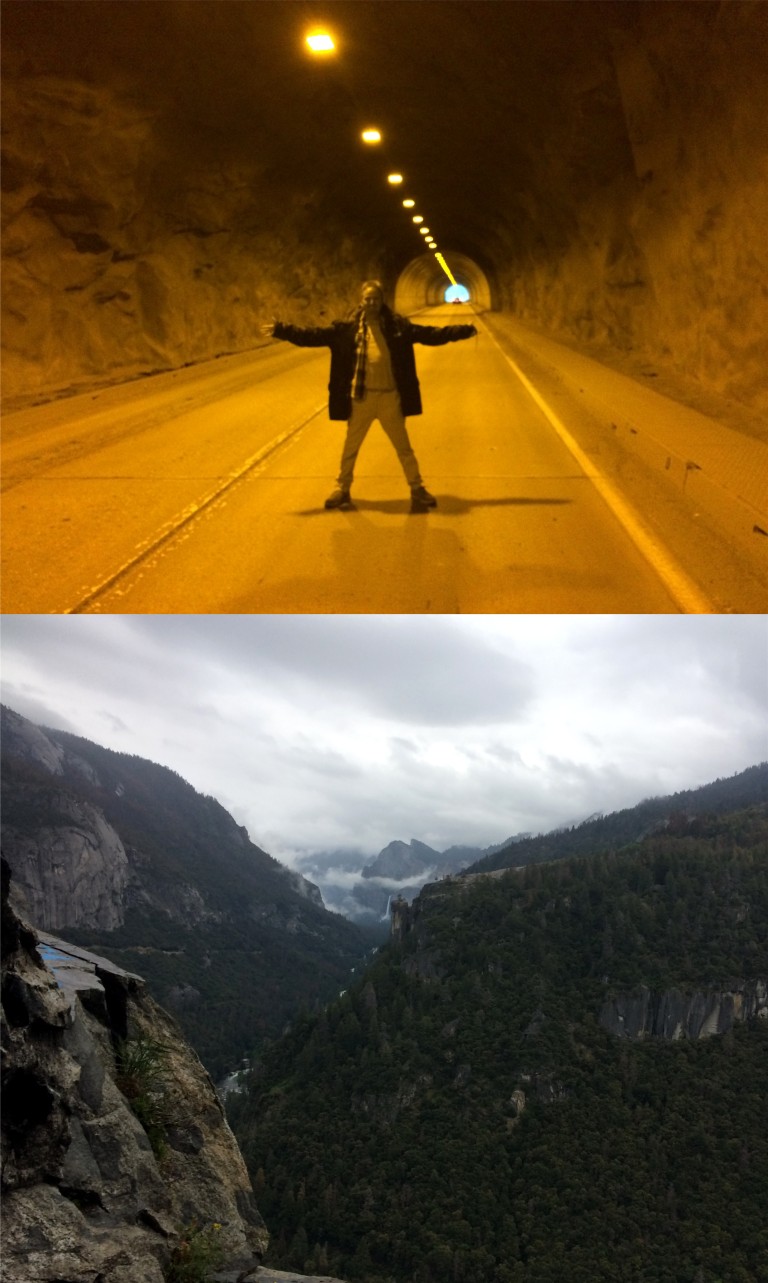 “Don’t try this at home!” Anybody who has driven into Yosemite National Park by way of Route 120 knows about the long tunnel you pass through shortly after entering the park. If you stop your car after exiting the tunnel and walk back about half way, there’s a side tunnel running off of the main tunnel that you can walk through to get a great view of Yosemite Valley. The bottom picture is the view from the side tunnel. Cars passing by you when you’re walking in the tunnel sound like airplanes taking off!

The Yosemite Lodge swimming pool in the 1940’s with Yosemite Falls in the background: I couldn’t get a good line up with the falls from the pool area now so I took my picture from the parking lot of the lodge. When we showed the old photo to a nice guy who works near the swimming pool area, he informed us that the old pool used to be where the parking lot is now. So there! The bottom photo is the pool today. (Period photo from Vintage Everyday) 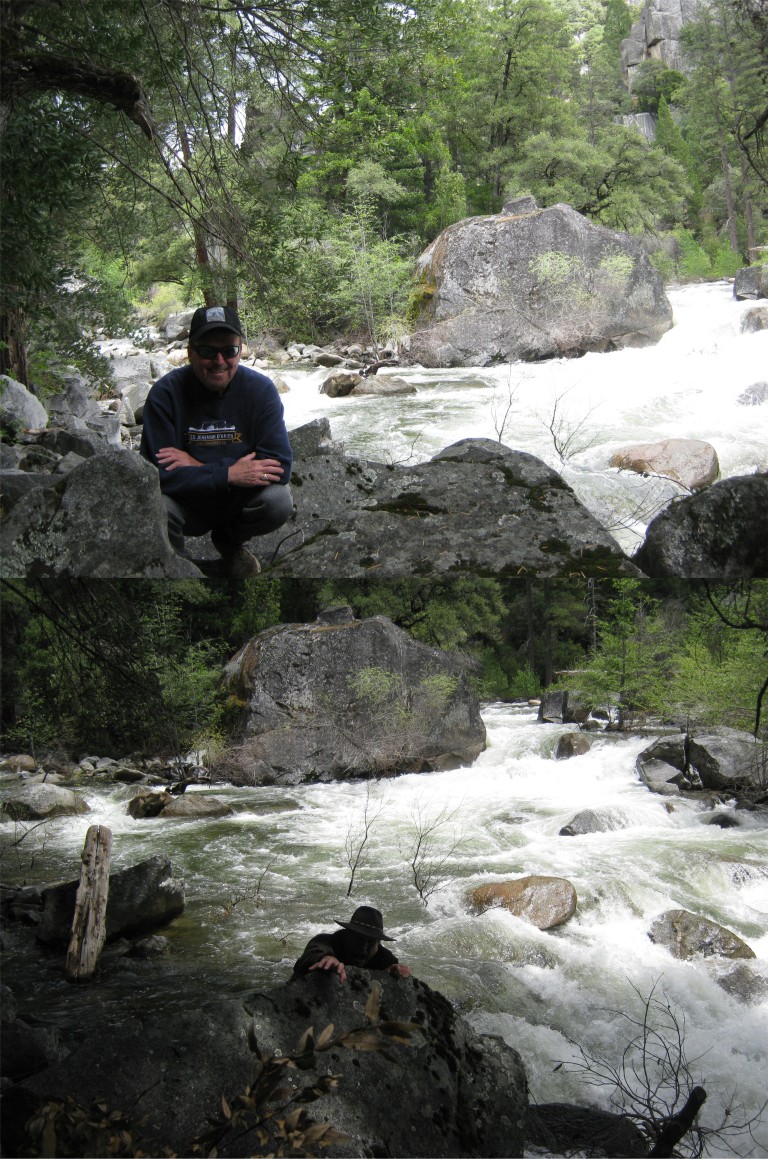 Taking a break near some rapids along the Merced River with my brother, Kevin:

“Okay, Kevin, let me get a picture of you in this spot now. Just ooooooone more step back!”

Inspiration Point from the tunnel; looks like the early 1960’s. (Vintage Everyday) 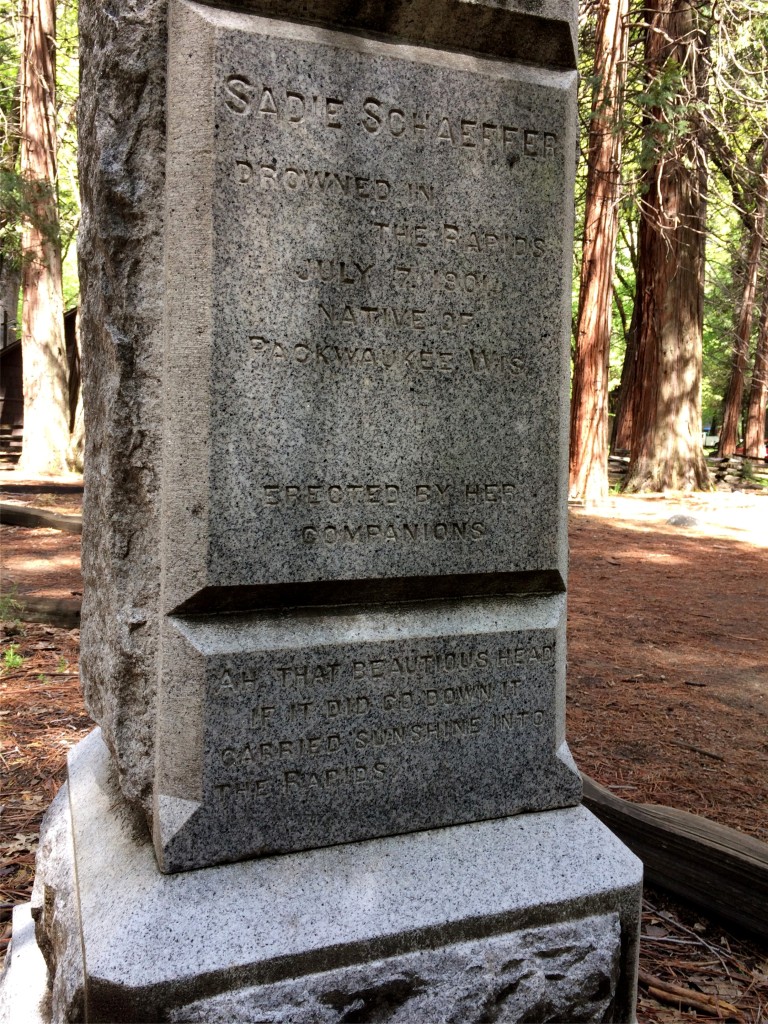 “Denial is a river in Egypt.” Face it, guys, she drowned! On July 7th 1901, Sadie Schaeffer, Sadie Young, and Johnnie Van Campen went rafting down the Merced River in a small boat built by Van Campen. When they got near where El Capitan is, Sadie Young left the boat because she was nervous about the water. Shortly after, the boat overturned. Van Campen made it to shore but Sadie Schaeffer drowned in the river and her body was never found. Since she was never located, her friends put an epitaph on her grave marker in the Yosemite Cemetery that sounds a little optimistic, if not morbid! It reads, AH, THAT BEAUTEOUS HEAD, IF IT DID GO DOWN, IT CARRIED SUNSHINE INTO THE RAPIDS.

I didn’t make it up to Glacier Point this year; this was a picture from last summer. I was wondering about the girl on the ledge; might even be Sadie Schaeffer! Below, is the link to a post I did on Yosemite National Park last summer.