I love Castro Valley almost as much as San Francisco. About thirty miles southeast of San Francisco, it’s my home town. When my folks left North Dakota we moved to Castro Valley when I was eight, and I met most of the people who would become important in my life here. It was the town where all those dreams I had in life that never came true originated. Castro Valley was never an unfriendly town like it was in a weird dream I had not long ago, but it’s a lonelier place now because most of the people I came to know from here have moved away, and some of them are dead. These might be of interest to people who have fond memories of Castro Valley. 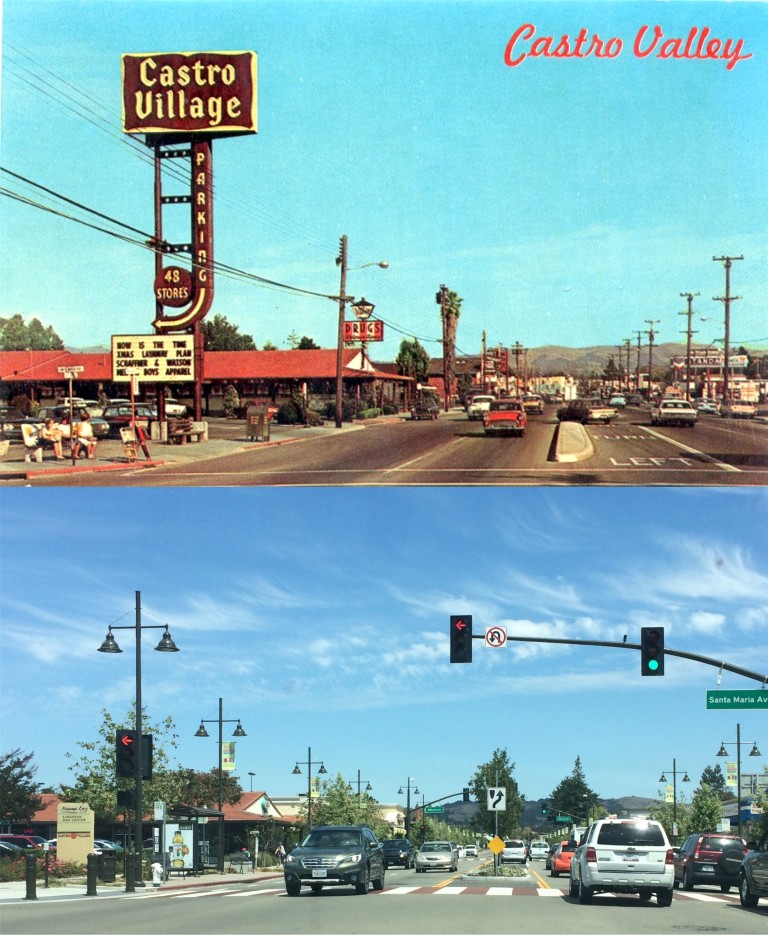 The original Castro Village Shopping Center that opened in 1948 is still here. 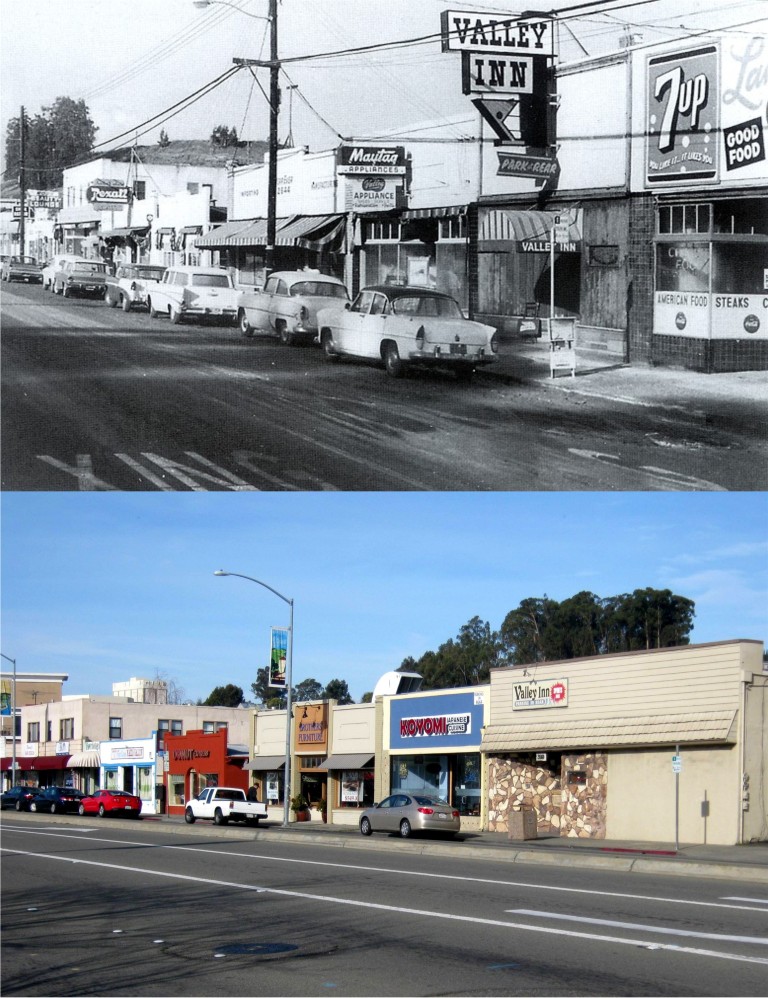 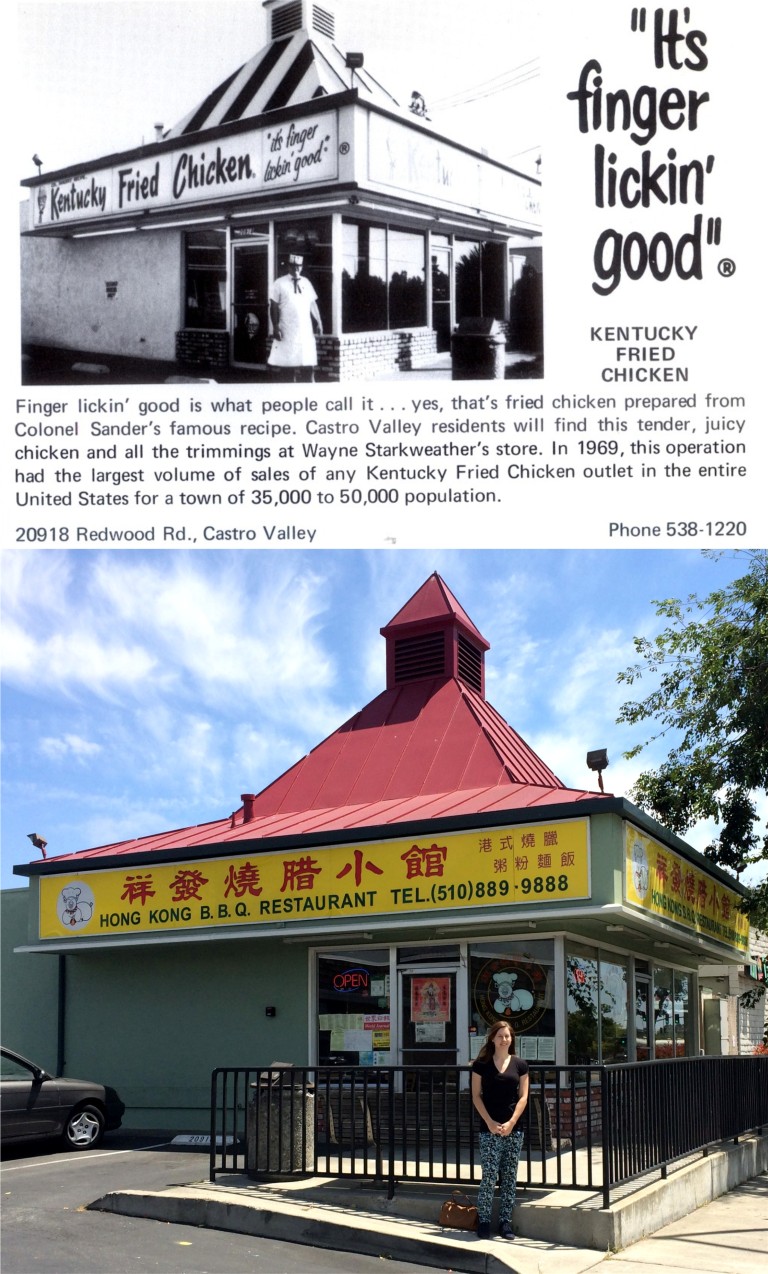 Castro Valley had a KFC (then called ‘Colonel Sanders Chicken) claim to fame in 1969. 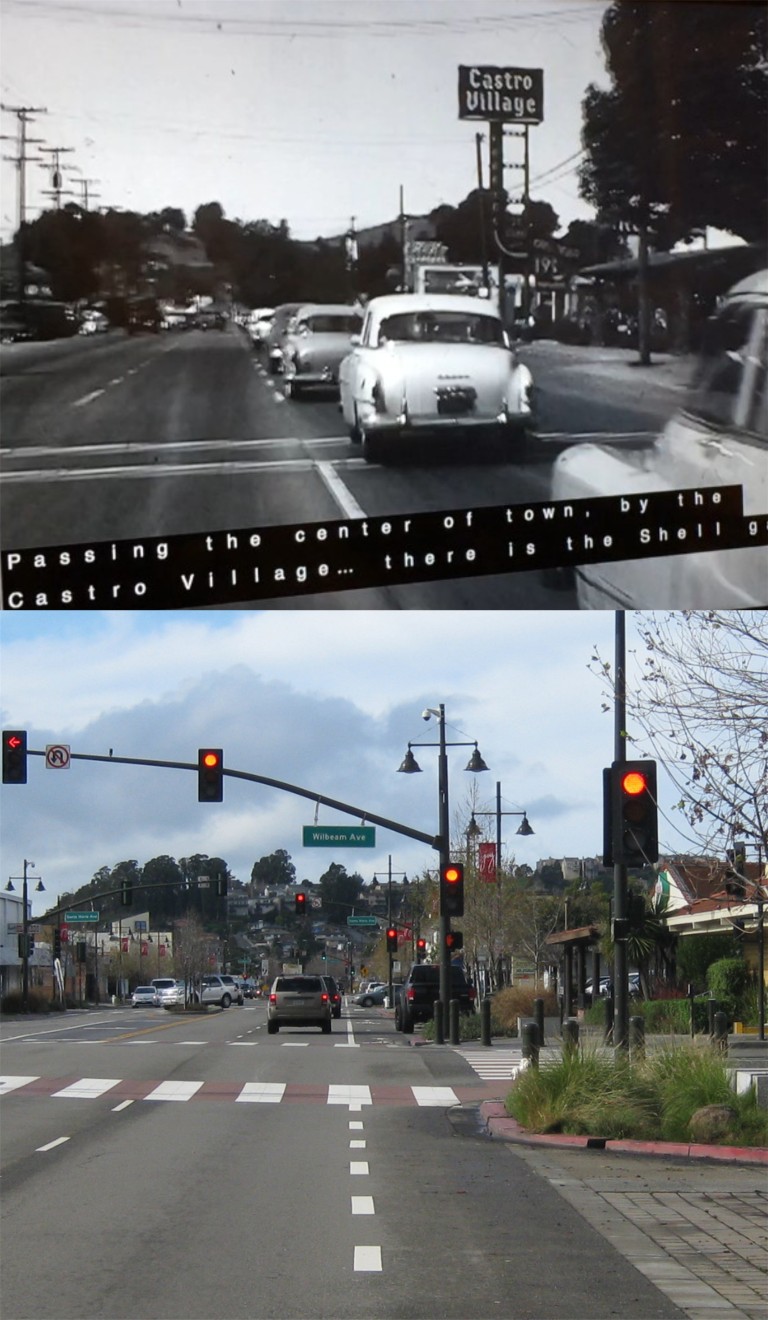 Last month, a Castro Valley History Exhibit presented by Lucille Lorge and Randy Vanderbilt at the old Castro Valley Adobe Building featured a film of a drive along Castro Valley Blvd. circa 1956. This was before my family moved here, but much of the street was the same as it was when I grew up here, except there were more sidewalks by the time we got here. 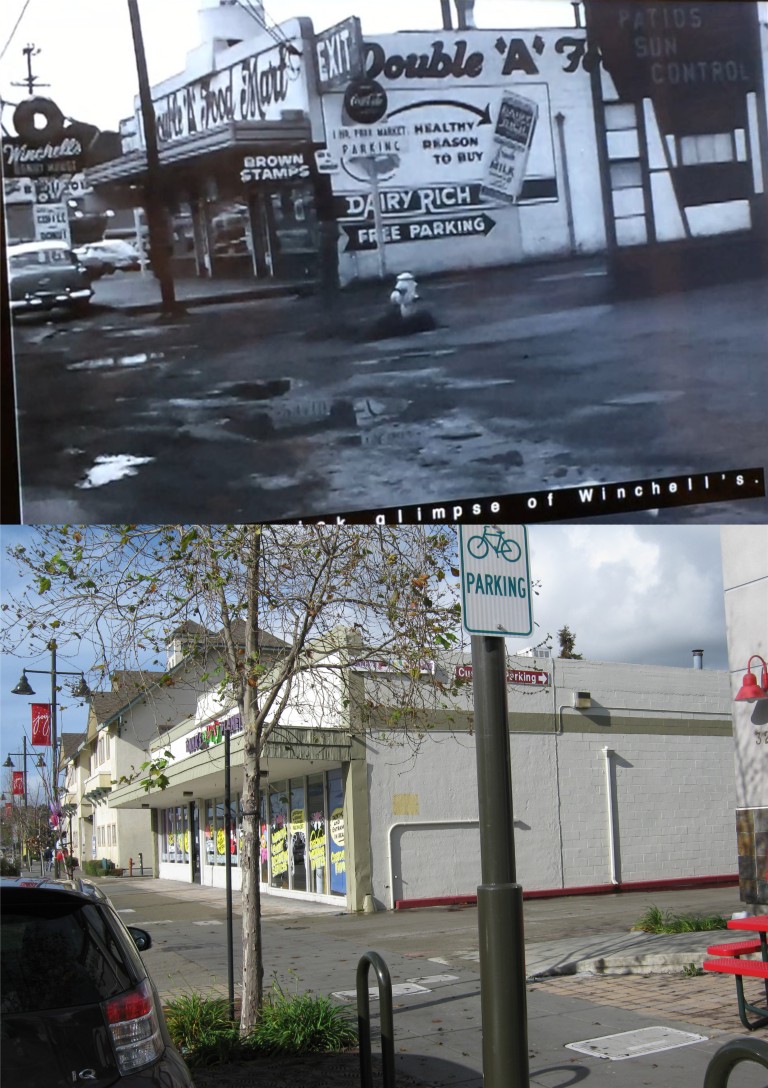 Auctions were held in this building when we were kids, (No, not like the one in the Pirates of the Caribbean ride!) but we were more interested in Winchell’s Donuts next door. 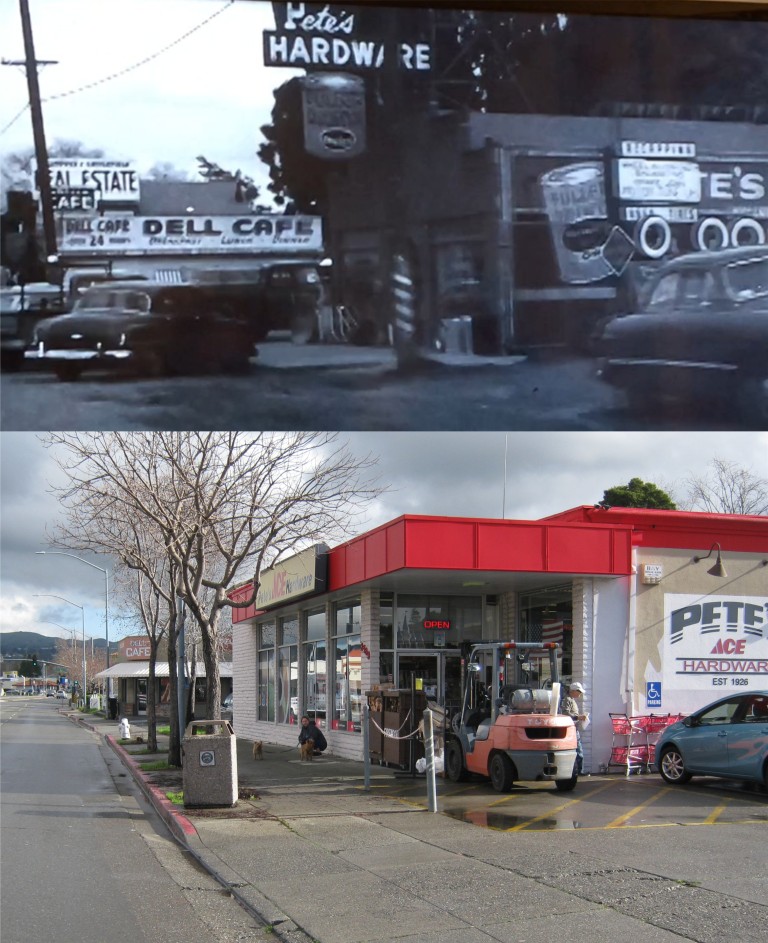 Pete’s Hardware, dating back to the 1920’s, might be the oldest surviving business in Castro Valley. 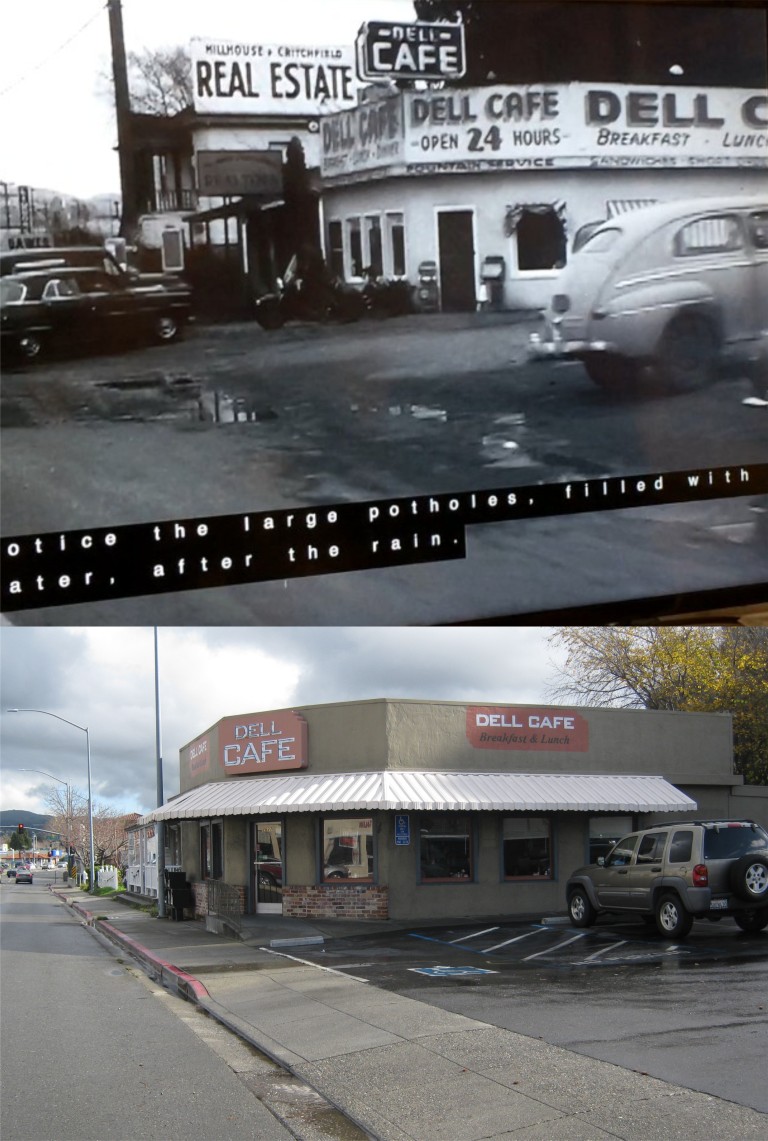 Ah, the old Dell Café. Who doesn’t have a memory here that grew up in Castro Valley? 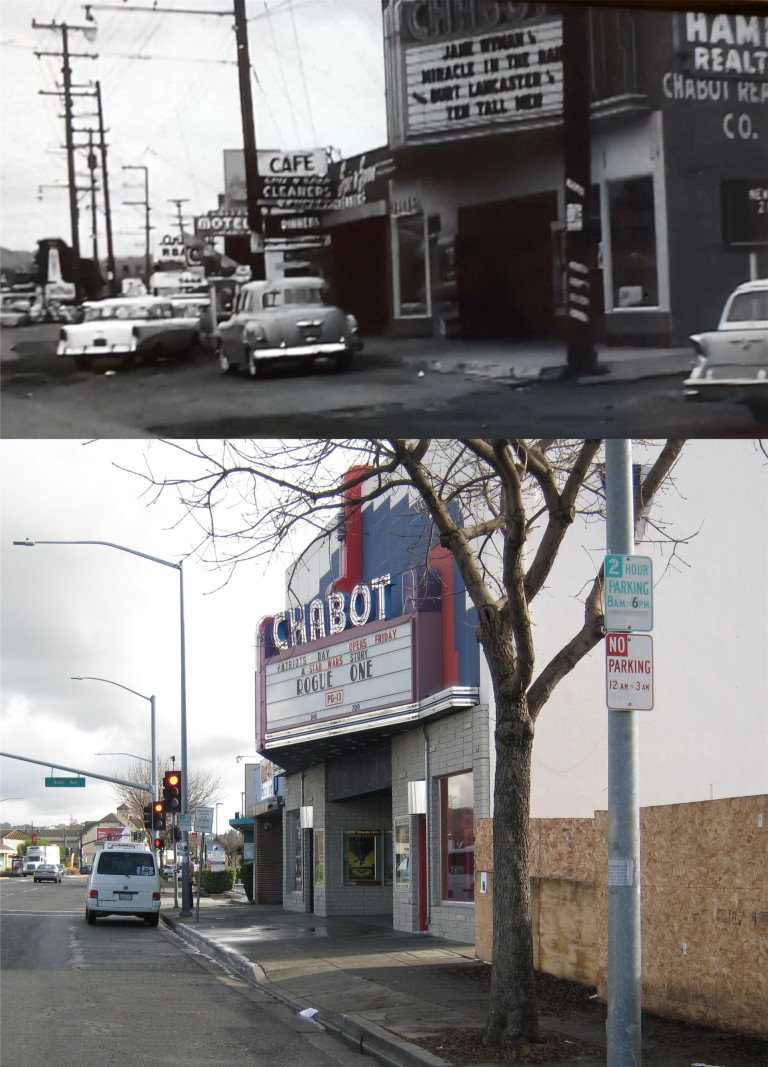 Chabot Theater that opened in 1949 was showing ‘Miracle in the Rain’ with Jane Wyman: This was released in 1956; that’s where I’m dating this film from. The second feature ‘Ten Tall Men’ with Burt Lancaster was released in 1951 and was probably a more enjoyable movie. 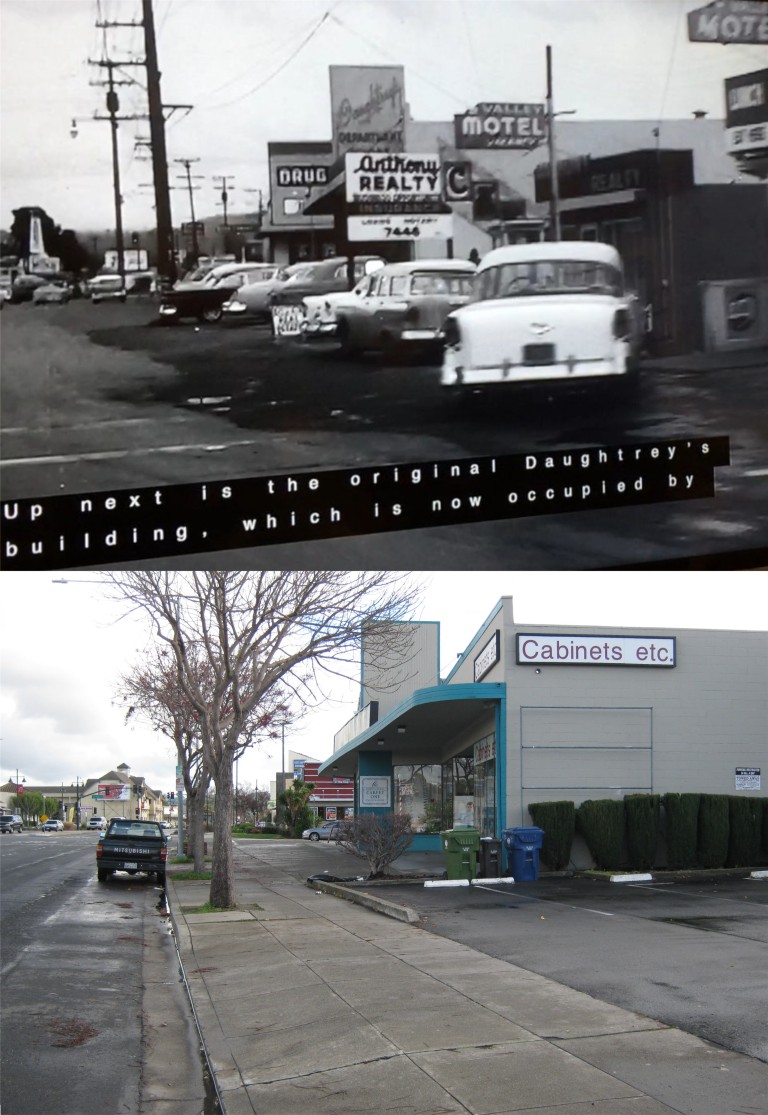 Where Daughtrey’s Department store was located before they moved down near Castro Village. 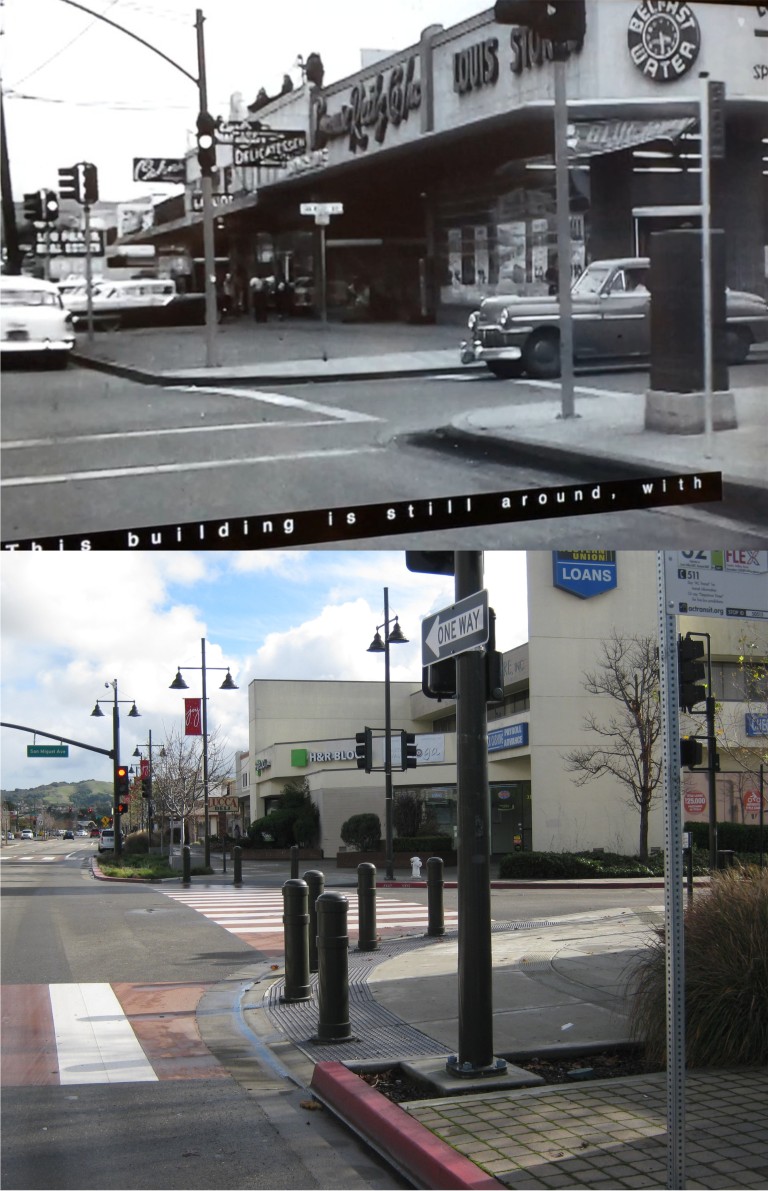 San Miguel Avenue: Sprouse-Reitz and the Louis Store have been replaced by a savings and loan, and H&R Block. And they call that progress! Lucca’s Delicatessen is still there though.

The small, peaceful, and comfortable main library on Redwood Road was built in the 1960’s to replace an old wooden structure that served as the library before this one. It was a great place to study and sleep during high school. It’s closed and fenced off now since it was replaced by the new library on the south side of town.

The dream I had was a different one
than any I’ve had, to date.
A day was ending that just begun,
and everyone seemed to be late.

A street I have known for a long time
had become an uncomfortable place.
Downhill became such a long climb.
Behind me, was something to face.

The bank, and the shops, and the theater
weren’t on the same side as before.
A girl waits for no one to meet her.
My greetings, the people ignore.

Then the dream changes course in a vapor
to another place that I know,
where students are writing a paper,
and everyone’s talking quite low.

A library book I’m returning,
that I checked out when I was young.
But the people are not here for learning
that the dream has now put me among.

Now there’s yelling, and pointing, and staring,
in a place you’re supposed to be mute.
But I walk out without really caring.
The girl I left waiting was cute.

She’s gone now. I’m back at that corner.
This can’t be the same street I took!
There’s a strange, but familiar mourner
telling me to go back for the book.

3 thoughts on “The other town I love.”