No, this post isn’t about people searching for survivors after the disaster; it’s about buildings or landmarks, seen here in pictures from the earthquake, that have survived to this day. We’ll start at California and Sansome Streets looking up Nob Hill. There’s actually two survivors seen here, first being the California Street cable car tracks. The cable car line has been running along California Street for one hundred and thirty eight years! Second is the Fairmont Hotel at the top of Nob Hill on the right. You can still see part of the hotel, although somewhat lost in the sunshine, today. Notice the church near the top of Nob Hill on the left in the old photo. This was the Grace Episcopal Church on the corner of California and Stockton Streets. There’s more about this church in the next picture.  (Vintage photo Atlantic Magazine)

Old St. Mary’s Church on the left side of California Street, and Grace Church at the corner of Stockton Street on the right: The old photo is looking down California Street just up from Stockton Street, a reverse direction from the previous photo. You can’t see Old St. Mary’s too clear from this spot anymore, and not at all from between the cable car tracks like the old picture, but it’s still there. This is as far out into the street you can go before losing sight of it, and you take a chance at being run over by a car or a cable car! The church can be seen just above the cable car on the left, and it’s still a great place to light a candle for a loved one or, like me, rest your feet awhile when you’re tired of walking around San Francisco. Grace Church on the right did not survive the disaster, and was rebuilt on top of Nob Hill. Now known as Grace Cathedral, it’s one of the most beautiful churches in San Francisco. (Vintage photo Atlantic Magazine)

The Palace Hotel, the grandest hotel west of the Mississippi, survived the earthquake in relatively good shape, but was completely burned down by the fires after the quake. Although another Palace Hotel is there today, and as fine a hotel as any in San Francisco, it was completely rebuilt so it doesn’t count as a survivor. What is a true survivor is the crown topped Call Building behind the Palace Hotel. It survived the earthquake and fire, although heavily damaged, and was a major part of the San Francisco skyline for years after. In the late 1930’s, some nitwit with power decided to remove the dome at the top and remodel the facade of the building. It’s now called the Central Tower. (Vintage photo San Francisco History Center)

One block west from the Palace Hotel is where 3rd Street runs into Market. On the right is the bottom of the Call Building, what it looked like in 1906, and what it looks like today after the 1930’s remodeling. On the left is the Hearst Building of publisher William Randolph Hearst, the inspiration for Orson Welles movie ‘Citizen Kane’. Hearst wasn’t about to let an act of God or nature take anything away from him, so he had the building completely rebuilt. It’s still known as the Hearst Building today, see the H above the door in the modern picture, but it’s really a survivor in name only. (Vintage photo Atlantic Magazine)

Kearny Street, up from Broadway: Just down Kearny behind the man in the old photo you’ll see the diagonal cut of Columbus Avenue. On the corner you’ll see a building that was under construction when the Earthquake hit. This is the Sentinel Building, also known as Columbus Tower, and it’s still there today; it’s the green, white, and gold building in the center. (Vintage photo San Francisco History Center)

Powell and Market Streets; two survivors here: On the left is a small portion of the Flood Building. You’ll see more on this one in the next picture. In the center is the front of the old Emporium Building across Market Street from Powell. Although heavily damaged, by the earthquake and fire, enough of the structure survived for rebuilding, and is now Bloomingdales. (Vintage photo San Francisco History Center) 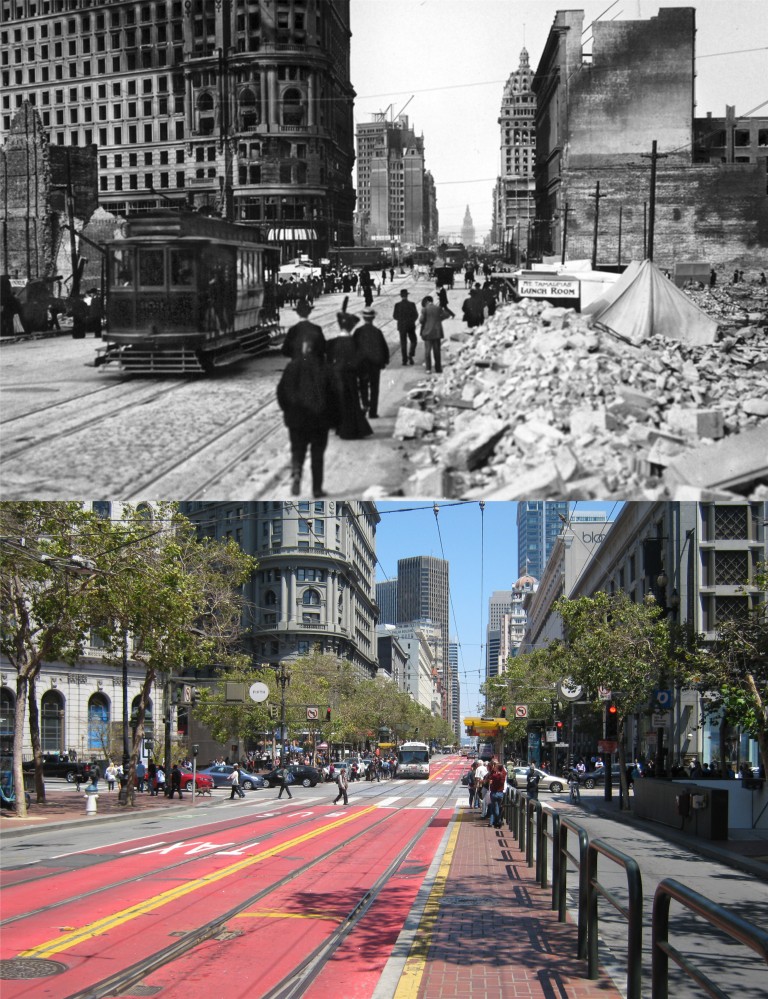 Market at 5th Street looking toward the Flood Building: There’s, actually, six genuine survivors from the old photo today, and you can see them all in my picture. On the corner of Powell and Market Streets, the Flood Building survived the disaster in pretty good shape, and looks almost as it did in 1906. Below it is one of the busiest locations in San Francisco, Hallidie Plaza, and the Powell Street cable car turntable. Next survivor on the right is the Gothic looking building with the red top at 704 Market Street, originally the Mutual Savings Bank Building. Just behind 704 Market Street is the old Chronicle Building with its damaged clock tower. You can just see a piece of the brownish red Chronicle Building minus the clock tower it no longer has behind the Baroque looking 704 Market Street. In the center of Market Street is the Ferry Building. Across Market Street and seen today behind the Humboldt Building is the Call Building. At the far right is the old Emporium Building, now Bloomingdale’s. (Vintage photo Atlantic Magazine)

The grandest survivor of them all; the Ferry Building seen from the Bay as the fire that destroyed most of San Francisco approaches: The only thing that saved the Ferry Building from burning was the width of East Street, now called the Embarcadero, which was too wide for the fire to jump. (Vintage photo Atlantic Magazine)