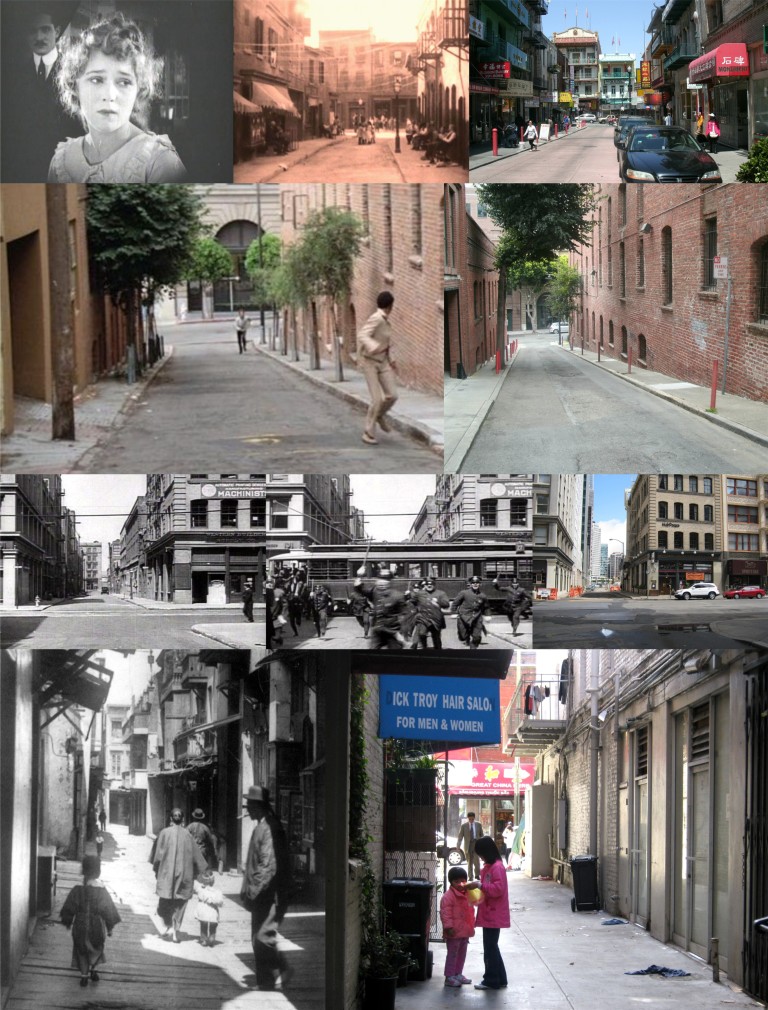 “Sneakin’ Sally through the alley.” That line has, absolutely, nothing to do with this collection of San Francisco alley photos, but I like it, so I threw it in. Top row, left to right; Mary Pickford, Hollywood’s first “America’s Sweetheart” came to San Francisco in 1918 to film ‘Amarilly of Clothes-Line Alley’. Film scholars and this amateur movie sleuth haven’t been able to positively identify the alley used in the movie, but many think it may have been Waverly Place as it empties into Washington in the right photo. Ninety eight years is a long time, and things change, but there are still a lot of things about this location that don’t line up to me. Still, it’s the favorite comparison, so, I’ll include it here, and keep looking. Second row from the top; Clint Eastwood’s “Dirty Harry” character chases a terrorist suspect, who has detonated a bomb in the men’s room of the police station Harry works out of, up Osgood Alley in North Beach in the 1976 film ‘The Enforcer’. To me, this is what a San Francisco alley is supposed to look like; it levels out at the bottom of Telegraph Hill on to Pacific St where the old fire station is, and is surrounded by old brick buildings. Btw, Harry caught him; like Dudley Do-Right of the Mounties, he always gets his man! Second row from the bottom; Buster Keaton, here at 2nd and Minna Streets from the 1922 movie ‘Daydreams’. The building at the end of the alley was demolished before 1939 to build the Trans Bay Terminal. In the center photo Keaton races west down the alley ahead of, just about every member of the 1922 San Francisco police force as a streetcar passes heading south on 2nd. At the far right, looking east down Minna Alley in the modern picture, you can see the end of the demolition of the Trans Bay Terminal Building in progress. Bottom row; I like this comparison of children in a Chinatown alley. The photo on the left is by turn of the 20th Century photographer Arnold Genthe, a fellow who had nothing better to do than to go around San Francisco taking pictures. Now, I ask you, “Who does that?” Actually, his photographs of early San Francisco, particularly, Chinatown are considered masterpieces, and one of his pictures, taken down Sacramento Street after the 1906 San Francisco Earthquake is considered one of the ten best photographs of all time. Although not as quaint as the pre 1906 picture, children in Chinatown today still have a customary flavor in their style.