I finally got a chance last Sunday to check out the new park they built this year where the old Russian Hill Reservoir at Hyde and Bay Streets used to be. It’s kind of out of the way and not that easy to get to, even with public transportation, but it’s got great views, and it’s better than that ugly reservoir that’s been there for over a hundred years. (Thumbnail images)

You can see the concrete from the reservoir from Hyde Street on the left in both pictures from an update that I did in March of 2020. 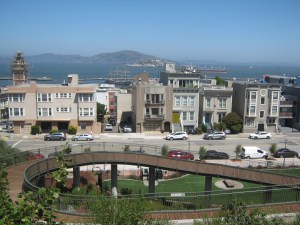 Because the park was built on the side of a steep hill, there’s a winding walking path that takes you from the bottom of the park to the main area at the top. That’s the Ghirardelli Square Tower under construction on the left. 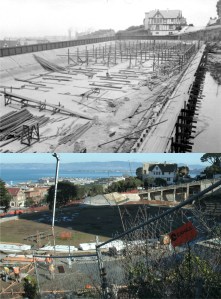 In 2021, I matched up an opensfhistory.org photo of an old photo from Larkin Street with the construction of the new park that would open in 2022.

Last Sunday, I did another update of the previous photos of the old reservoir under construction in 1919 with the new park looking toward Hyde Street. The famous Chateau Building at Francisco and Hyde Streets is still there. That tent was just a young couple with babies enjoying the new park for the day, and not the beginning of a homeless encampment. (opensfhistory.org) 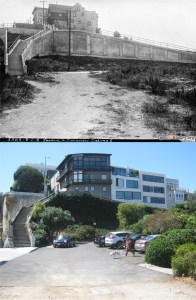 The old stairway that leads from the park up to Larkin and Francisco Streets in 1916: (opensfhistory.org) 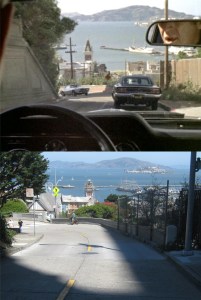 At the top of the stairs in the previous picture is sacred movie ground. This was one of the locations of the famous car chase scene with Steve McQueen’s Mustang chasing the Charger in ‘Bullitt’.

The view of the area from Bay and Larkin Streets in 1915 before the reservoir and park were built: (opensfhistory.org

3 thoughts on “Reservoir Park, or whatever it’s called”