These are a few updates of pictures I’ve done in the past, and a few new ones that I worked on in December, 2021. (Thumbnail images)

Where California Street comes into Market Street in 1941, and a rainy December, 2021: The Hyatt Regency blocks the view of the Ferry Building from here today.

A rainy day on the Embarcadero at Pier 7 in the 1950s and a rainy December day in 2021: Pier 7 was demolished and was to the left of the foremost Pier 5 seen in my picture. (Phil Palmer)

Another cable car heading up California Street from Market Street in 1961 and December of 2021: The old Southern Pacific Building is in the background of both pictures. (San Francisco Pictures Blog) 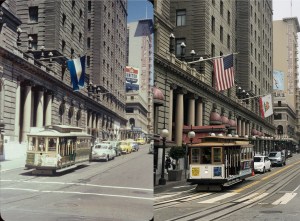 In Front of the St. Francis Hotel in 1954: The more things change…….. You know the rest of it. They’ve replaced, what looks to me like the flag of Argentina, with the flag of the United States. The vintage photo is by Charles Cushman. 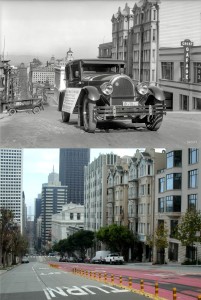 California Street approaching Powell Street during the 1920s: The old Crest Garage, demolished in 2018, is on the right in the vintage picture. (Shorpy Archives)