I took another ride on the cable car line they used to call the ‘Hyde Street Grip’ on Friday; it’s always one of the best attractions in town.

North Beach to Tenderloin, over Russian Hill,
the grades are something giddy, and the curves are fit to kill!
All the way to Market Street, climbing up the slope,
down upon the other side, hanging to the rope;
But the sight of San Francisco, as you take the lurching dip!
There is plenty of excitement, on the Hyde Street Grip!

I wanted to get a seat up front for picture taking so I jumped on the cable car before it stopped. “Nope! Nope! Nope!” the conductor said to me in a friendly manner. “No boarding the car while it’s moving.” My first impulse was to say to him, “Hey, I’ve been riding these contraptions since before you were born, buddy. Don’t tell me how to ride a cable car!” But times have changed and he was right. I just smiled and said “Sorry!” and we got along fine. 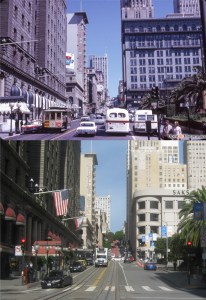 Heading up past Union Square: It’s hard to get a perfect line up updating vintage photos when you’re rocketing along at a lightening nine miles an hour, but they turned out okay. The vintage photo is from 1963. (opensfhistory.org)

They’re all set up for the Holiday Season again in Union Square. The Dewey Monument, seen in 1957 in the vintage photo, is behind the Christmas tree in the current picture. (opensfhistory.org) 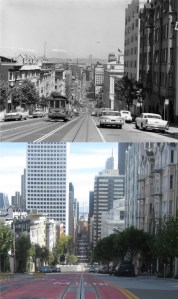 On top of Nob Hill we rolled past California Street, the only place where two separate cable car lines cross each other perpendicularly. (Walmartimages)

We leveled out for a bit at Powell and Clay Streets, and I was riding on the opposite side of a cable car like the one seen in the 1965 picture. (opensfhistory.org)

Rattling along past Lombard Street; the tourists are back here again in the hundreds at any given time. The vintage picture is from 1960. (opensfhistory.org)

And you end up taking the “lurching dip” from Chestnut to Bay Streets with spectacular views of the Golden Gate, Alcatraz, Angel Island, and the Bay.

Addendum:  Always point out when you’ve been corrected. I’ve referred to this cable car line in the past as the ‘Hyde Street Grip’, but the cable car line that Gelett Burgess wrote about in his poem, ‘The Ballad of the Hyde Street Grip’, was actually the now defunct O’Farrell and Jones Line. Check out the story below from the Market Street Railway.

2 thoughts on “Another ride along the ‘Hyde Street Grip’”