One of the best looks you’ll get of 1968 San Francisco are from three episodes from Season 3 of the television Show ‘I Spy’; ‘Tag, You’re It’, ‘Anyplace I Hang Myself Is Home’ and ‘An American Princess’. ‘I Spy’ was a television drama show filmed on location in exotic places like Hong Kong, Athens, and Mexico City, to name a few. The producers of the show wisely realized San Francisco was just as exciting of a place and filmed these three episodes entirely in San Francisco with scenes at the Presidio, Chinatown, Fisherman’s Wharf, City Hall, the Opera House, Coit Tower, the San Francisco Zoo, and the Palace of the Legion of Honor, among some of the locations. Robert Culp and Bill Cosby portray spies Kelly Robinson and Alexander Scott. Bill Cosby has come a long way up and a long way back down since ‘I Spy’, but this was a groundbreaking show for an African American, and these two guys are fun to watch together. (Thumbnail images)

In the opening scene of ‘Tag, You’re It’, there’s a great panning shot of 1968 San Francisco from atop the Fairmont Hotel. 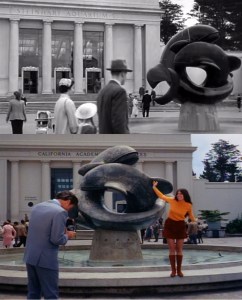 The Steinhart Aquarium Whale Sculpture scene in ‘Tag, You’re It’ is priceless! I think that dingy hippie girl went on to be a regular on the Smothers Brothers Show. (SF Gate, from the film ‘The Lineup’)

‘An American Empress’ opens up with a live shot of Chinatown, on Grant Avenue looking north toward Sacramento Street.

There’s an extended scene from on top of the old Ghirardelli Omnibus from Pier 43 through Fisherman’s Wharf in ‘An American Princess’. 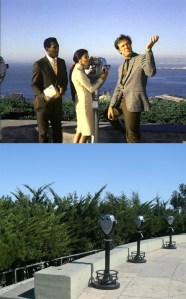 There’s also a scene from ‘ An American Princess’ filmed at Coit Tower when you could still see San Francisco from the parking lot. Those telescopes are a joke now!

In ‘Anyplace I Hang Myself is Home’, Kelly is brainwashed by an undercover traitor into trying to kill himself by jumping from the top of Coit Tower.

“Scotty”, who had also been brainwashed, climbs up to the top of the tower to talk Kelly down. 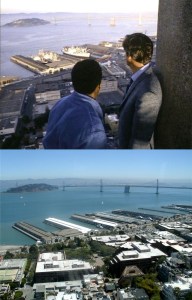 San Francisco TV doesn’t get any better than this!