I don’t believe for a moment that the Cliff House will close forever! Visited by the likes of Jack London, Mark Twain, Buffalo Bill, and just about every Star and Starlet from Hollywood’s Golden Age, it’s a landmark. If they keep the building in good shape, I think it will reopen when this COVID-19 Pandemic is under control. Where else am I going to go to take then and now pictures? My introduction to San Francisco was as a kid when my parents took us to the Cliff House after we moved to the Bay Area from North Dakota. The three times in life that I’ve been in love, (when I was a kid I thought it was supposed to be only once) I remember wonderful days out there with each girl. In fact, on a long ago December 30th one of the girls and I sat in the Redwood Room and watched the sun go down into the Pacific Ocean. After it disappeared, they rang a bell, as was the tradition at the time. Yes, a lot of the magic of the old Cliff House disappeared after the 2000 renovation, but it’s still the Cliff House. I’ll miss it very much during what I am sure is going to be a temporary hiatus. These are a collection of some of the Cliff House pictures that I’ve posted in the past on my website.

Maybe the oldest picture of the Cliff House that I’ve seen; possibly dating from 1857 when it first opened up: (SF Chronicle / SF Gate) 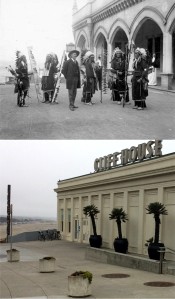 Buffalo Bill and some Native Americans from his Wild West Show in front of the old Cliff House:

“Alright, I dare you! Who else wants to make fun of my hat?”

The old Gingerbread Cliff House survived the 1906 Earthquake and burned down the following year in 1907.

From the mid 1950s to the early 1960s they had a Sky Tram running behind the Cliff House.  (SF Chronicle)

The view of Seal Rocks from behind the Cliff House in the 1950s: (SF Chronicle) 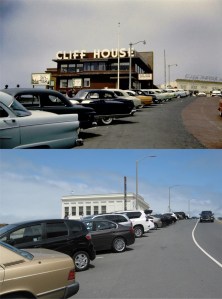 One of the best things about old pictures of the Cliff House were the cool cars parked out front. 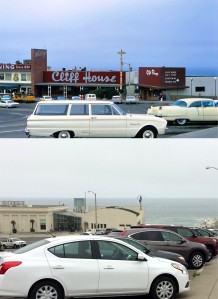 The cars from the 1960s were cool too!  (vintagevacationphotos.com) 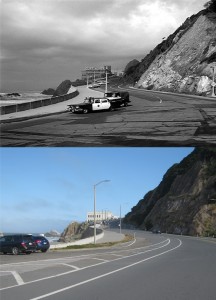 Bad guys in a truck who have kidnapped a teenager are pulled over down from the Cliff House by Harbor Command Officers in an episode from the 1957 television series ‘Harbor Command’. 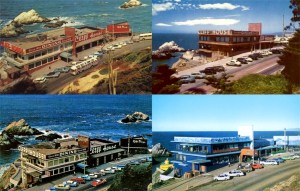 Incidentally, did you know that the old Cliff House, like a chameleon, would change colors during different times of the year and periods of the day? On evenings with a blazing sunset on the horizon, it would appear red like the top left picture. During the months of autumn, it would take on a brown, rustic hue, as at the top right. As the darkness of the night approached, it would turn black, like the picture in the lower left. On sunny spring mornings, the reflection from the Pacific Ocean often turned the building blue, as seen in the picture at lower right. Okay, you’ve already caught on that I’m teasing; this was how the Cliff House was painted during different periods from the 1950’s, 1960’s, and 1970’s. 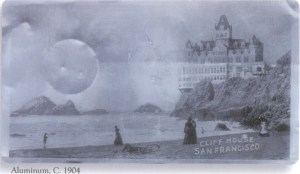 An aluminum postcard from 1904: And we think our Twenty First Century technology is so great!

My 17 year old mom on the left took a train from Grand Forks, North Dakota to San Francisco and visited the Cliff House long before I did.

My best friend, Danny, sniffed out the trail of Buffalo Bill and his horse on one of our visits there.  (William F. Cody Archive) 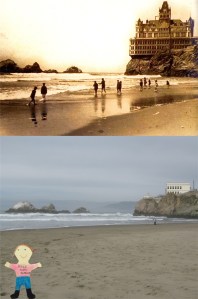 Heck, I even took Flat Stella there once! 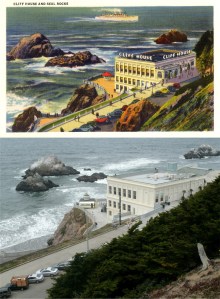 One thought on “The closing of the Cliff House (Thumbnail images)”