That’s a line from Lawrence W. Harris’s poem written just after the 1906 Earthquake and Fire in San Francisco.

{From the Ferry to Van Ness, you’re a God-forsaken mess. But the damnedest, finest ruins, nothing more and nothing less.}

These are a collection of comparison pictures I took this week from the Embarcadero to Van Ness Avenue. Downtown San Francisco isn’t a “God-forsaken mess”, but it’s not what it used to be right now; there isn’t a lot to do. This inspired me to do an awful take on Mr. Harris’s poem.

{From the Ferry to Van Ness, there is less to do, and less. But the damnedest, finest less, so that’s why I go, I guess.} 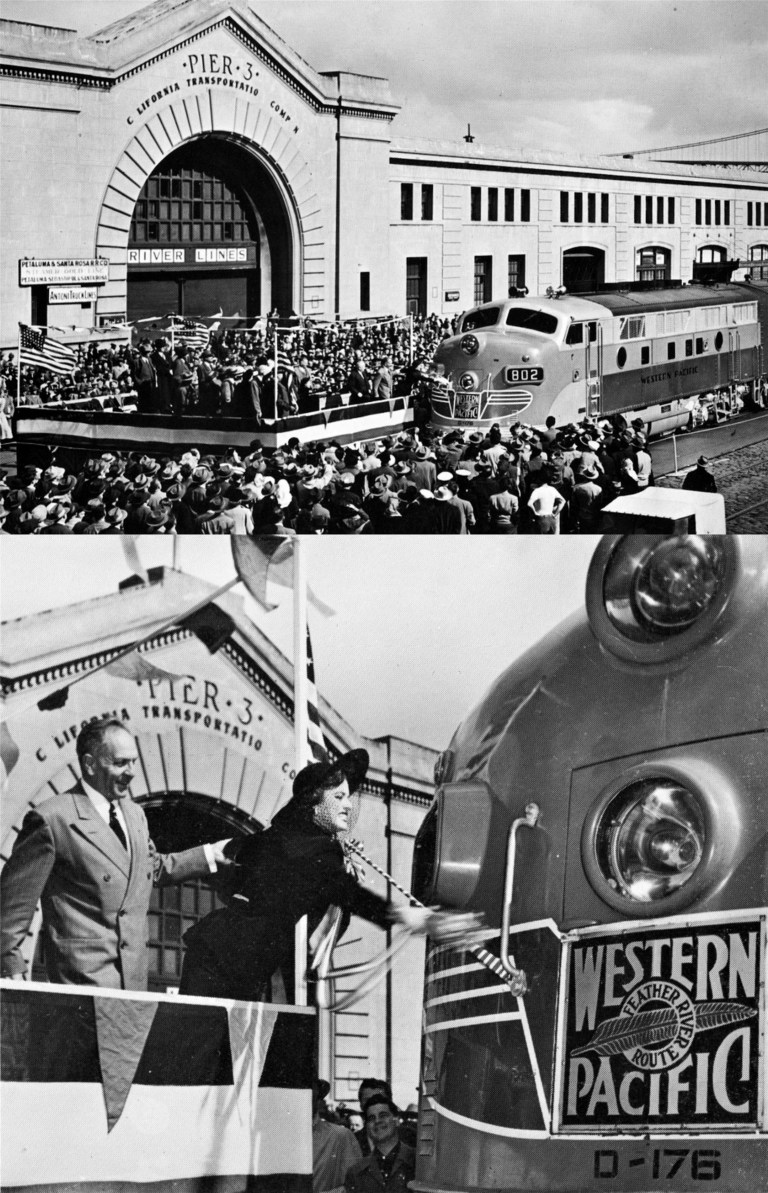 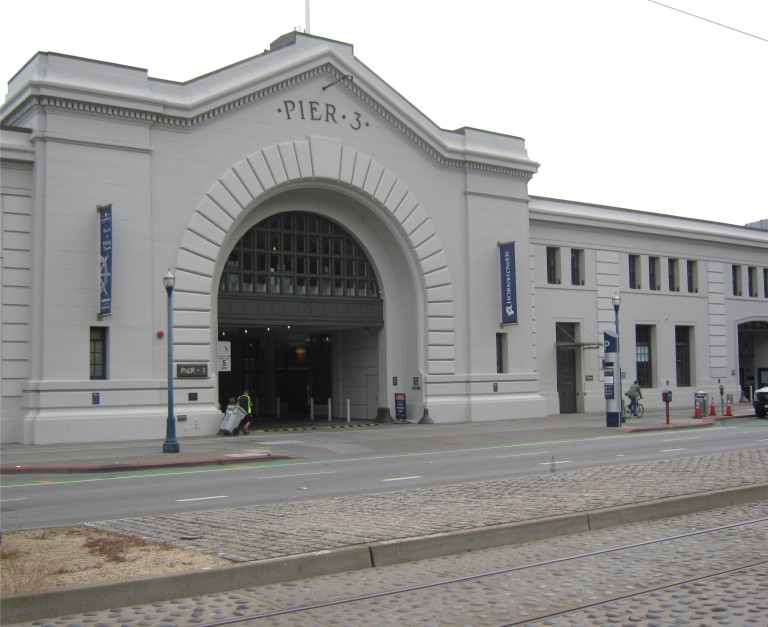 Actress Eleanor Parker christens the new California Zephyr train at Pier 3 near the Ferry Building in 1949: She played the wife of Kirk Douglas with an abortion secret two years later in the 1951 film ‘Detective Story’. (Top photo from Cross Country Chronicles, middle photo from filmsofthefifties.com) 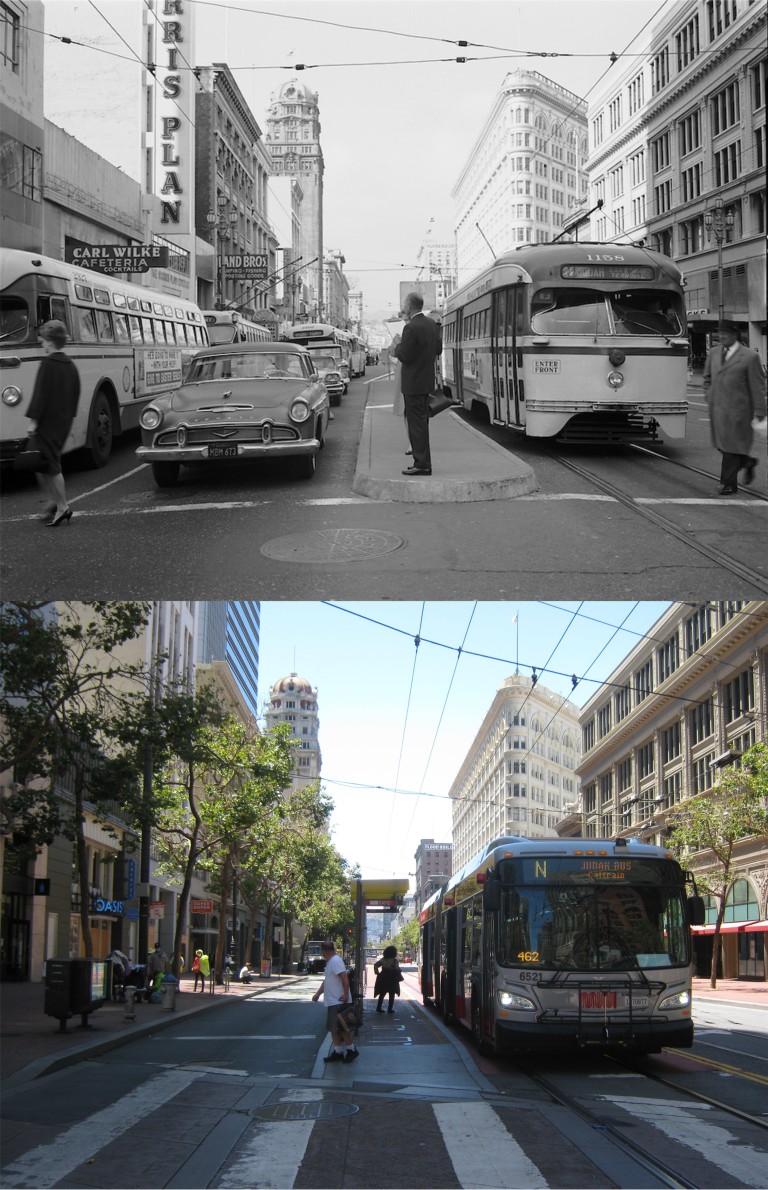 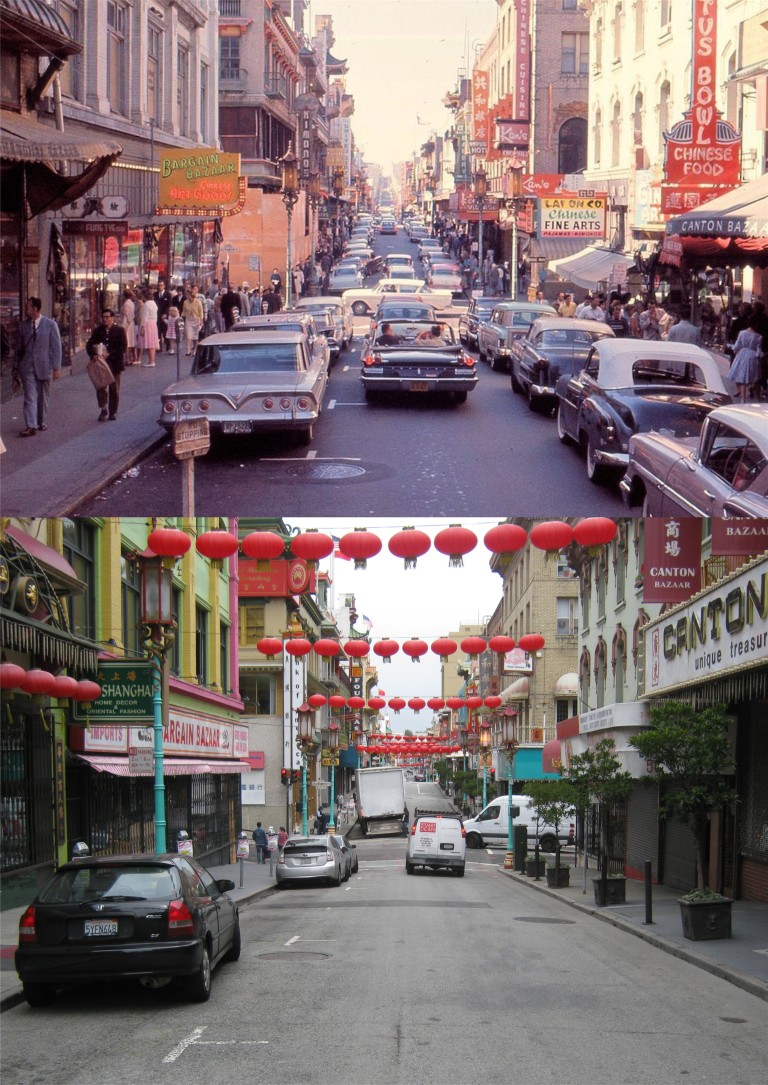 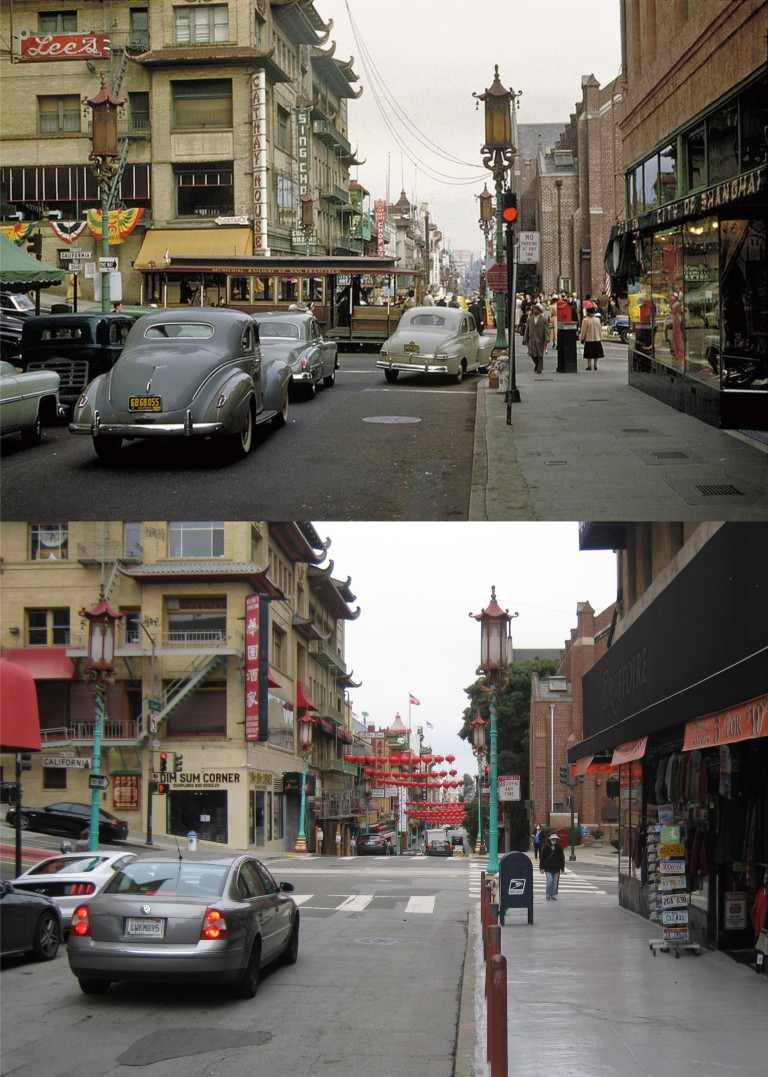 Grant Avenue looking toward California Street in Chinatown in 1957: (fineartamerica.com) 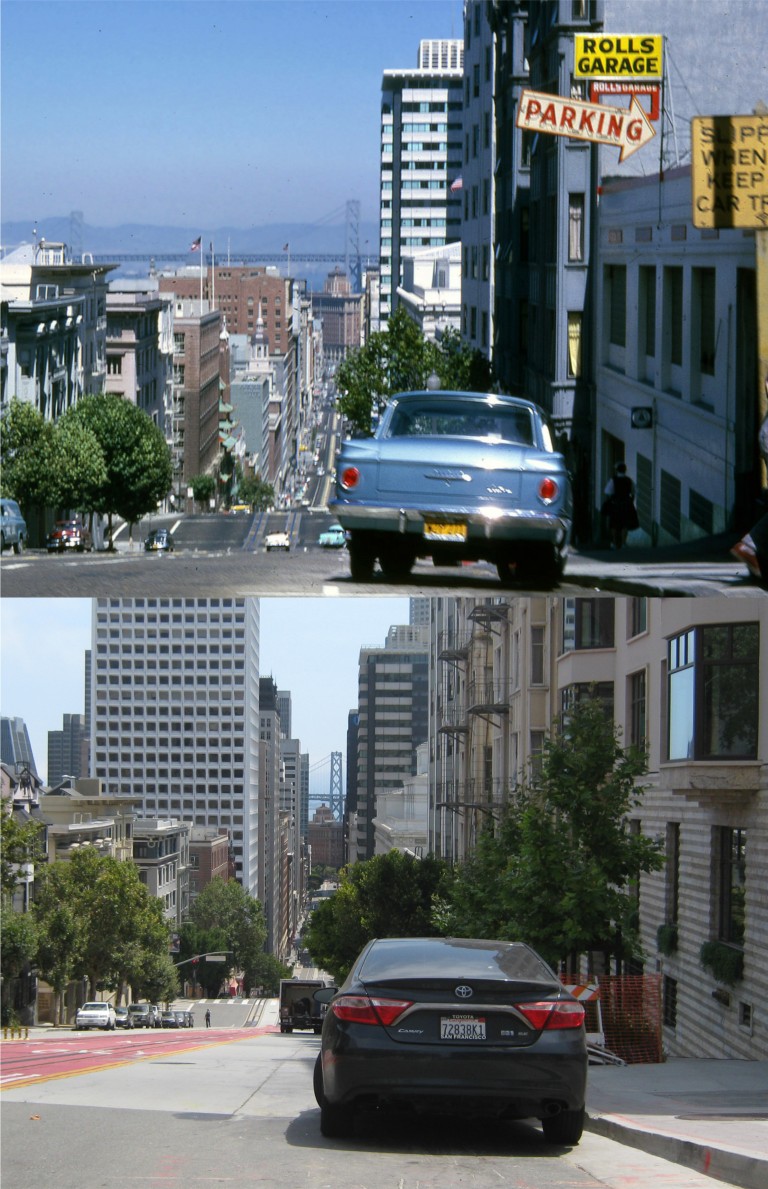 California Street looking down from Powell Street on the top of Nob Hill in 1961: The Rolls Garage was originally the old Crest Garage, demolished in 2018. (Street Scenes of San Francisco in the 1960s) 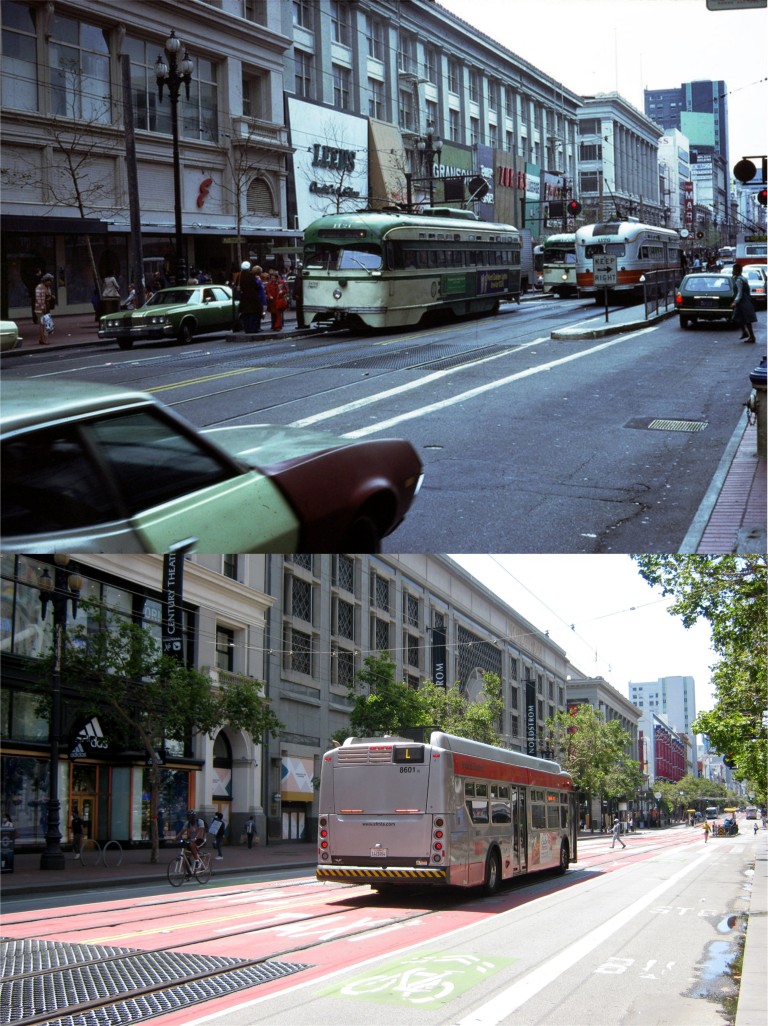 Market Street in front of the old Emporium Department Store, now Westfield Center, in the 1970s: Westfield Center reopened for customers late in June, but shut down again earlier this week due to a spike in COVID-19 cases. (flickr.com) 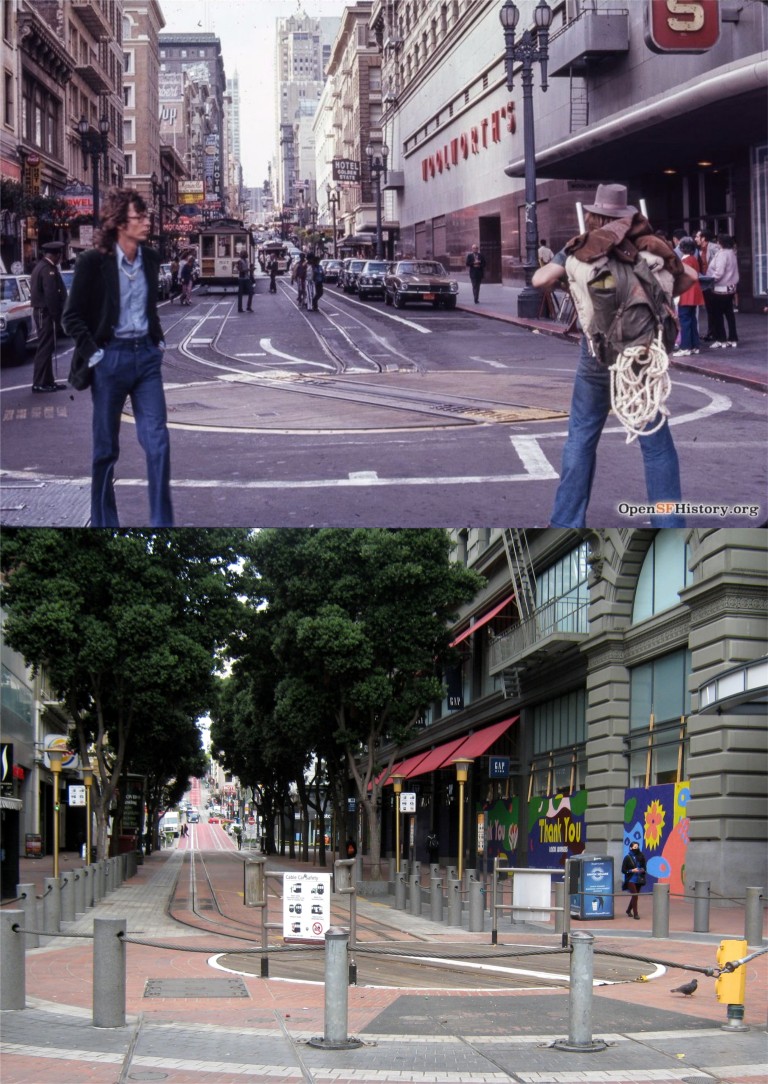 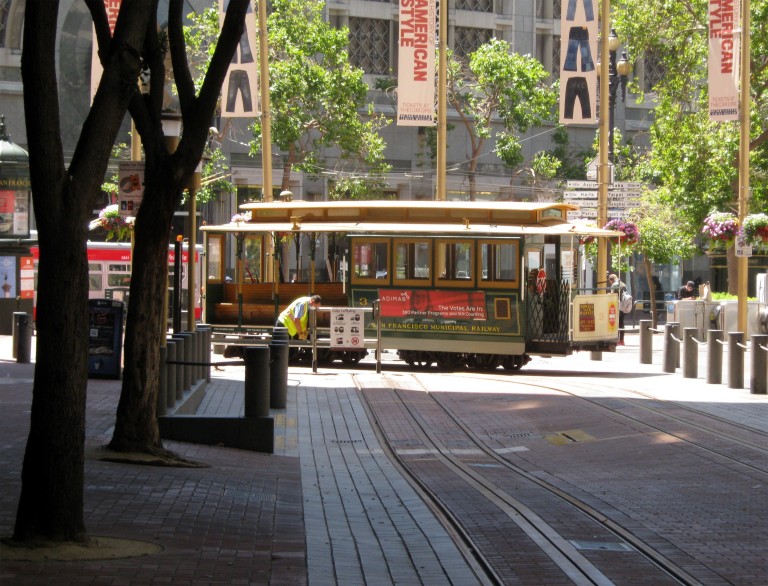 The cable car turnaround at Powell and Market Streets in the 1970s: The vintage photo from opensfhistory.org should be labeled ‘The Rolling Stones meet Crocodile Dundee’. Earlier this month while I was “out in the field” I was able to enjoy seeing a cable car rattle down Powell Street toward the turnaround for a maintenance run. People on Powell Street cheered as the cable car went past. 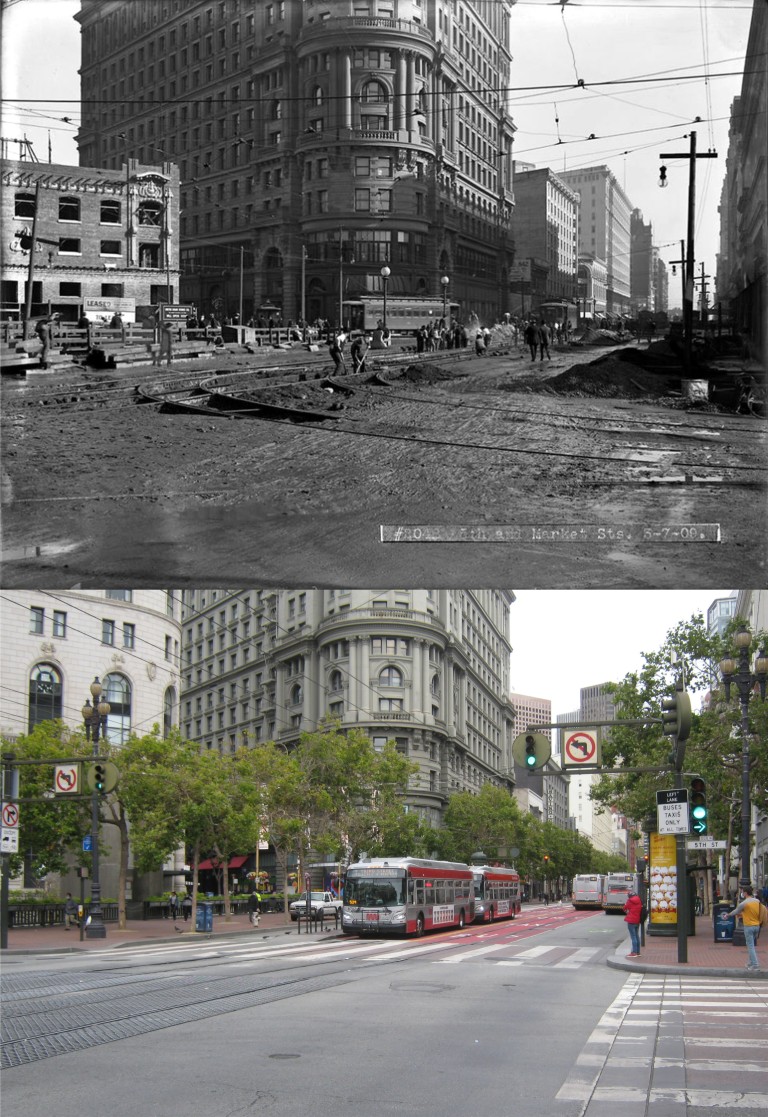 Work is finishing up repairing “the damndest, finest ruins” during May of 1909 in a SFMTA Archive photo from the Facebook page Lost San Francisco. The photo was taken at Market and 5th Streets looking toward the Flood Building. 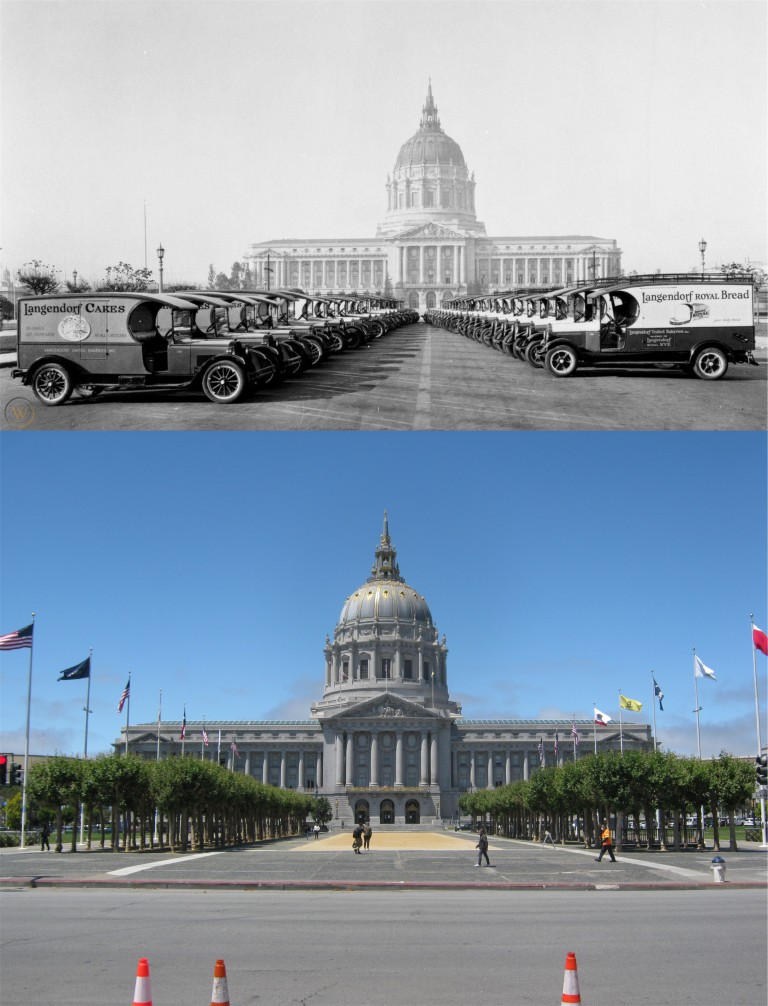 City Hall in the 1920s: I’m suddenly hungry for a peanut butter and jelly sandwich. The vintage picture was taken farther back from where I’m standing, but that area has been closed off for temporary homeless shelters due to the COVID-19 Pandemic. (worthpoint.com) 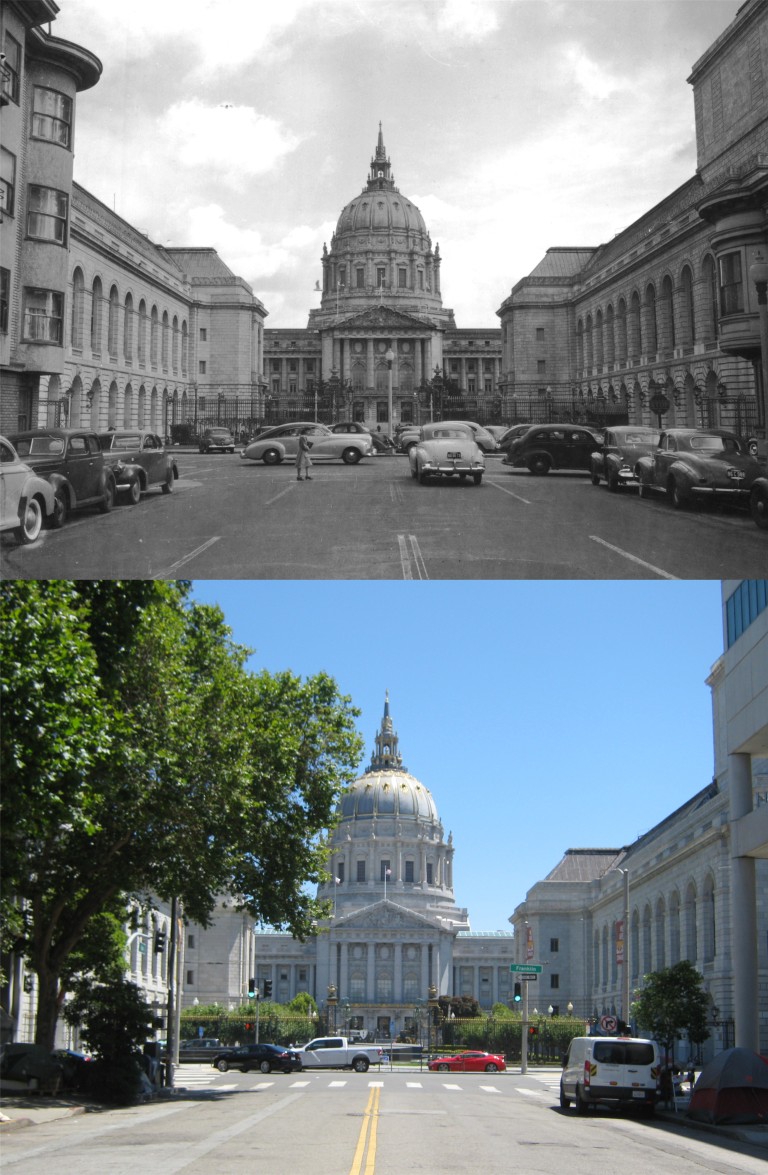 Fulton Street looking past Franklin toward Van Ness Avenue and the City Hall in the 1940s: The arched building on the left, just visible past the tree in my photo, is the Veterans Building where the United Nations was created 75 years ago last month. (flickr.com)

3 thoughts on ““From the Ferry to Van Ness””