The beginning of an exciting summer; and why not? True, there’ll be no 4th of July gatherings, no county fairs, still no Disneyland, and I won’t be hanging out at the beach checking out the girls; which won’t be a problem because they never paid much attention to me anyway. Still, the weather will be warmer, and San Francisco is as exciting of a place to visit during the summer right now as anywhere else. These are a collection of pictures I took in San Francisco during the first week of summer. 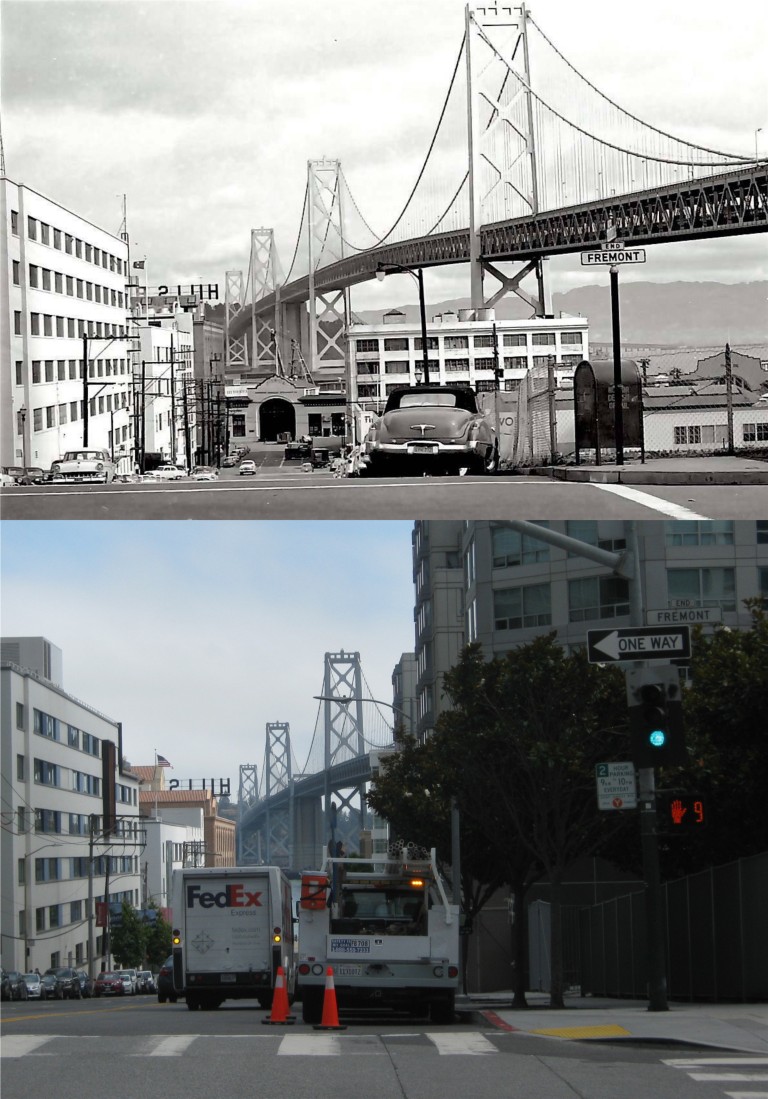 Harrison Street, looking east from Fremont Street in 1956: You can’t see the last tower on the San Francisco side of the Bay Bridge from here anymore. The FedEx and utility truck block the view down toward the Embarcadero where Pier 24, demolished in the 1990s, once was. That’s the old Hill’s Brothers Coffee Building down the street at the bottom left. (San Francisco Pictures Blog) 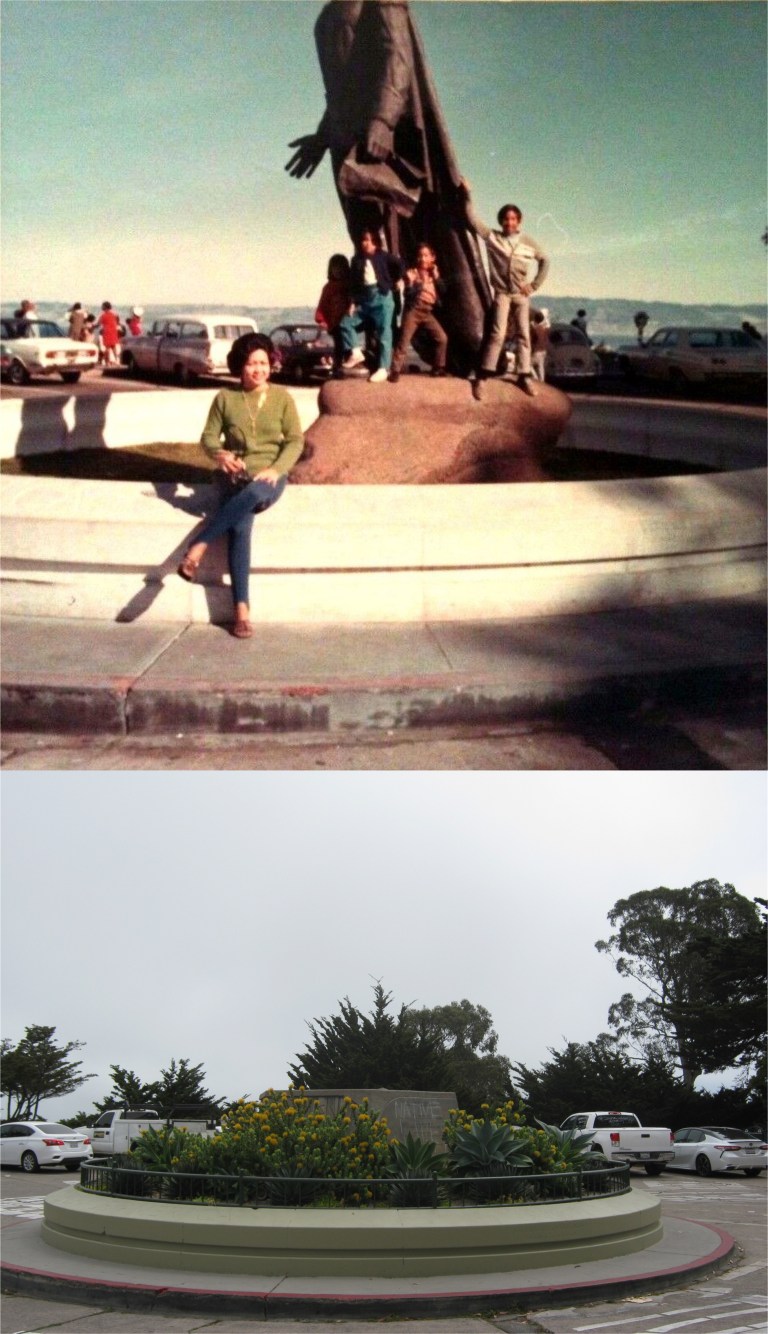 The Columbus Statue at Coit Tower during the 1960s: The statue was taken down and put in storage earlier in June. (ebay.com)

Mason Street, between California and Pine Streets: If you’ve ever wondered what it’s like to drive while wearing 3D glasses, the vintage photo from the 1950s will give you an idea. (ebay.com) 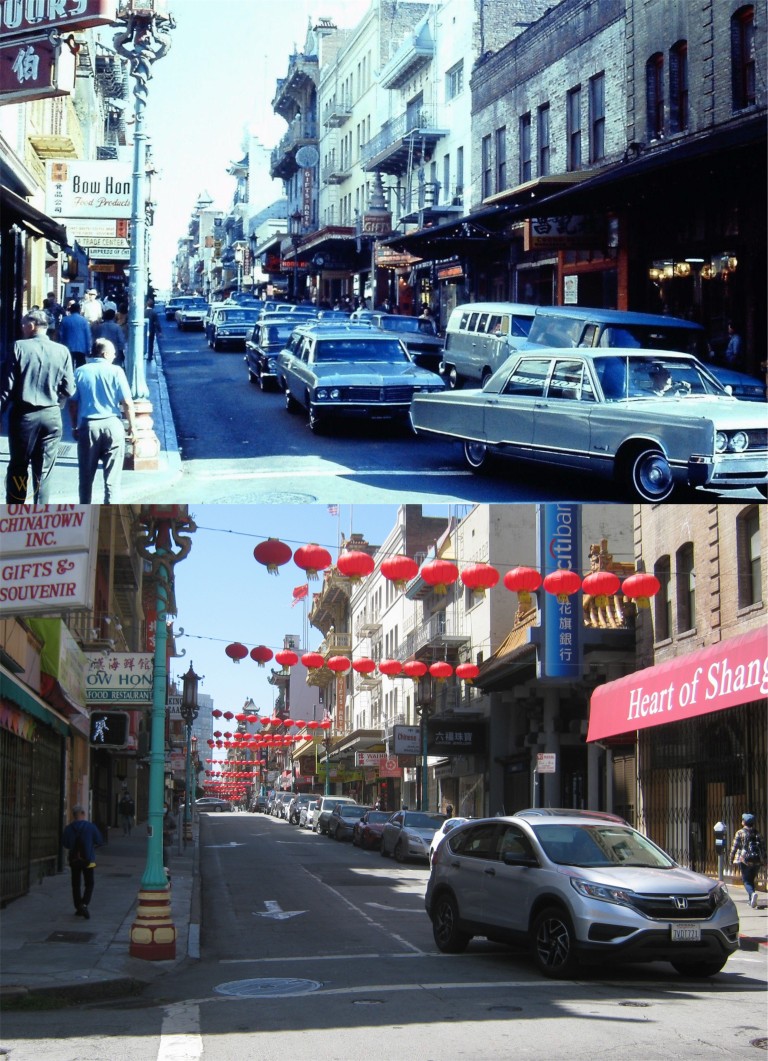 Grant Avenue at Washington Street in 1973: They’re slowly starting to trickle back into Chinatown as well, and a few of the gift shops are starting to reopen too. (worthpoint.com)

This building used to be the Telephone Exchange Building where a lot of the to and from long distance calls in San Francisco were directed by operators receiving them. It was considered so important that after Pearl Harbor it was sandbagged to minimize damage in the event of the Japanese bombing San Francisco.  Those would be great against vandals today, but they have some other kind of metal temporary doors and windows guarding the building now.

Tourists are starting to come back to Lombard Street slowly, as well. They’re getting close to the level of the vintage picture taken in 1975. After I took my picture, I walked past four girls grouping together for a selfie. I gave them a thumbs up and said, “A masterpiece!” and they giggled. It made me feel good, like the old days in San Francisco. You Know, like four months ago. (The Houston Chronicle)

The bunting on the Ferry Building in the opensfhistory.org picture fits right in with the 4th of July coming up this weekend, but it was actually taken February 18th 1939 celebrating the opening day of the Golden Gate International Exposition on Treasure Island.

Geary Blvd. at Kearny Street near Market during the 1950’s: The entrance to the old Chronicle Building is on the right in both photos. I can take a straighter picture than the vintage picture, but not nearly as interesting of a one. Hmm, ‘COLONICS-X-RAY’, I wonder if chiropractic doctors still offer that service anymore. (worthpoint.com)

I’ve wanted to do this one for awhile; Kearny Street at Columbus Avenue, (at least for now) in 1910. That’s the Sentinel Building, owned by Francis Ford Coppola, on the left in both pictures. (San Francisco Pictures Blog) 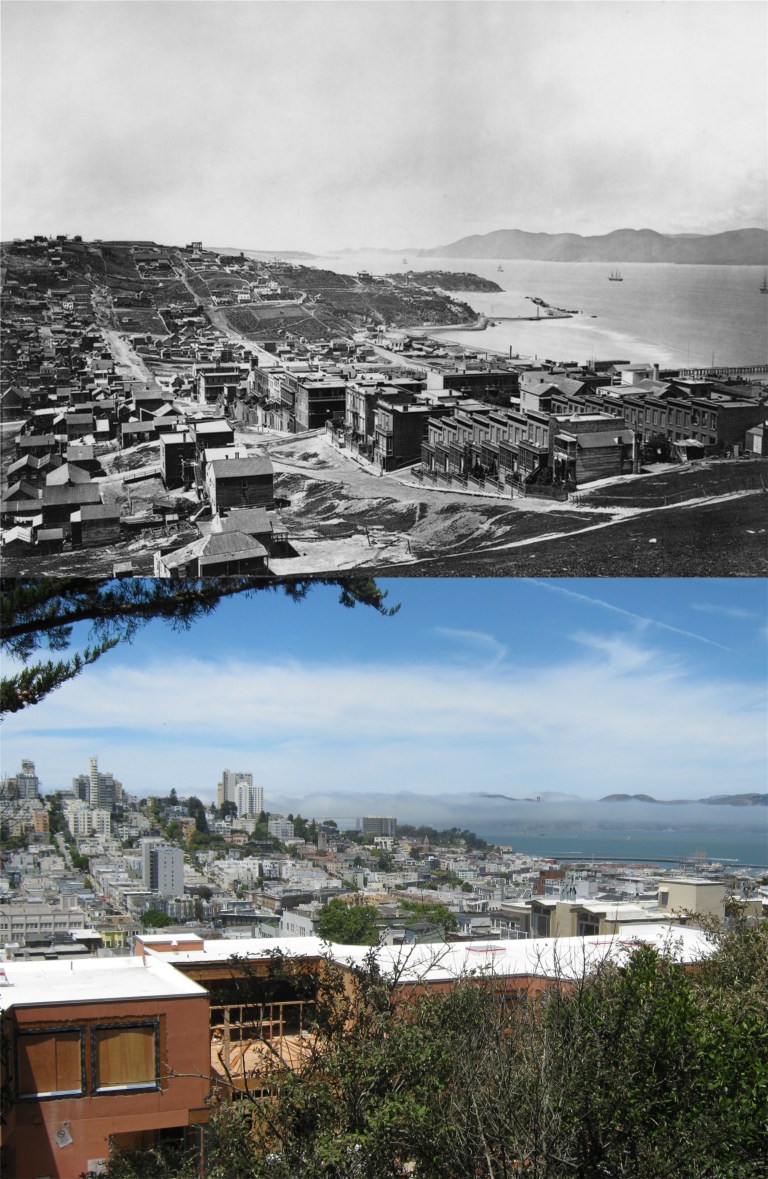 Russian Hill from Telegraph Hill in the 1800s: They’ve put up a few more shacks around here since then. You can just see the towers of the Golden Gate Bridge through the fog in my picture.