{The building at 706 Montgomery Street in San Francisco was a perfect setting for a murder. I had, in fact, thought so for a long time before anybody got killed in it.}

And so, Janet Keith opens up the narrative of Mary Collins double-murder, almost quadruple-murder mystery, ‘Dead Center’. It’s a nifty whodunit , written in 1942 and set in San Francisco, that mentions many locations in the city. Some are made up but most of them are accurate; a lot of them are gone now. I’ll concentrate on the spots no longer around. (Cover image from Dustjackets.com)

Most of the story takes place at the 706 Montgomery Street building mentioned that houses artists and writers as tenants. The inside cover of the paperback has a drawing of the building and the floor where the tenants live and work. This Flickr image of the drawing is in better shape than the one in the old paperback I bought. Janet Keith, a socialite who lives in Pacific Heights and rents a room in the Montgomery Building to become a writer, narrates the book and identifies the year the story takes place on page 180.

A prelude to the story is a list of the people staying at 706 Montgomery Street when the first brutal murder is committed.  One of them is guilty. 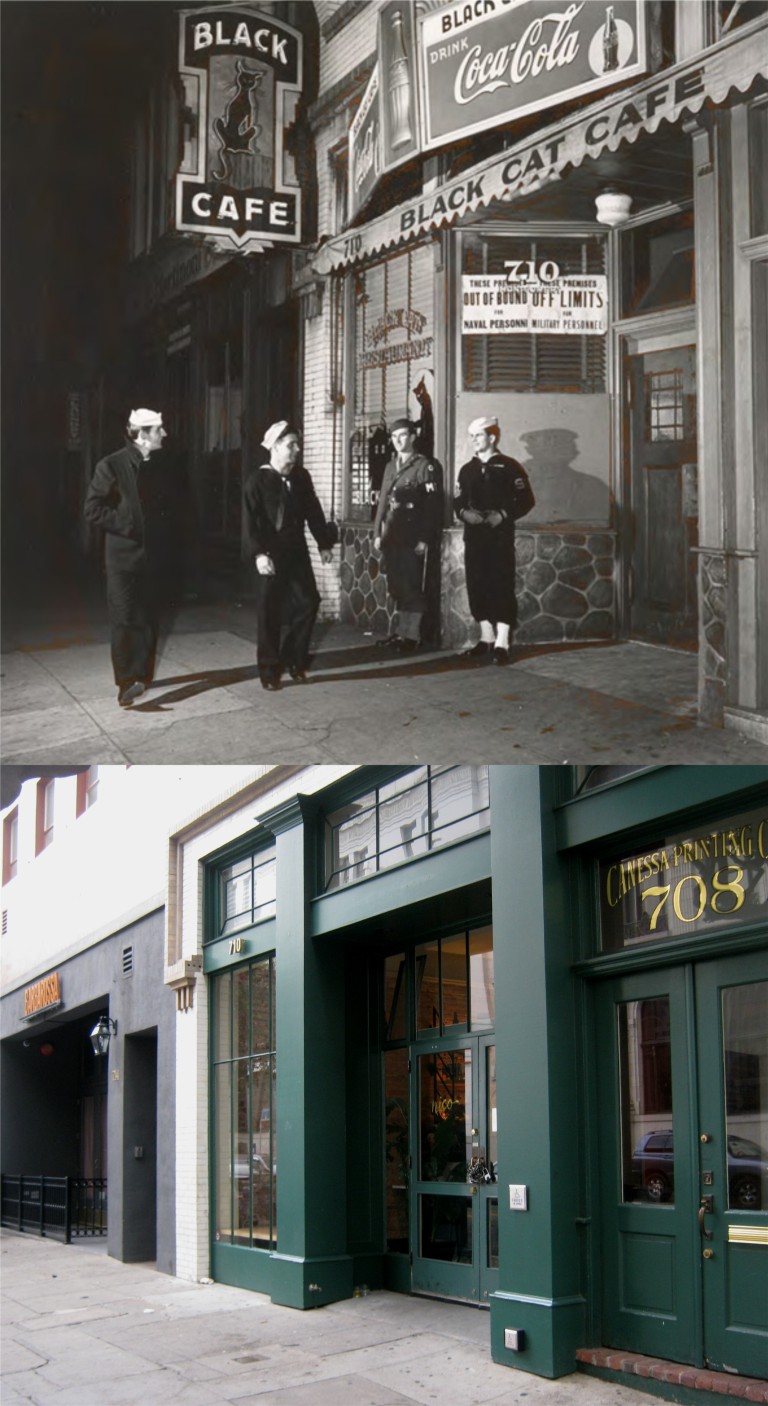 706 Montgomery is a fictitious address that sounds like another historic building you’ll see in the next photo. Today 706 Montgomery Street would have been in the building on the northeast corner of Montgomery and Washington Streets next to where the old Black Cat Café used to be. (Vintage photo from the Thomas Reynolds Gallery)

{The Red Rat is a dingy little saloon which serves as a sort of club for the tenants of 706, the Montgomery Block, and other old buildings occupied by San Francisco’s so-called Bohemians.}

The Montgomery Block was built in 1863 and frequented by the likes of Bret Harte, Rudyard Kipling, Lotta Crabtree, Lola Montez, Jack London and Mark Twain. It survived the 1906 Earthquake and Fire and was demolished in 1958. The Transamerica Pyramid Building occupies the spot today. (San Francisco Pictures / Library of Congress)

After inadvertently leading the police to a second murder, Janet is arrested by the police as a suspect and taken down to the old Hall of Justice Building on Kearny Street across from Portsmouth Square. She’s kept there throughout the night and released in the morning.

{Down in front of the Hall of Justice I debated about going straight home in a cab or picking up my car. I signaled a cab and told the driver to take me to 706 Montgomery.}

706 Montgomery couldn’t have been more than two blocks from the Hall of Justice, but I guess if Janet stood up under police interrogation all night she can be forgiven for taking a cab instead of walking. The old Hall of Justice, built in 1910, was demolished in 1968. A Hilton Hotel is there today. (opensfhistory.org) 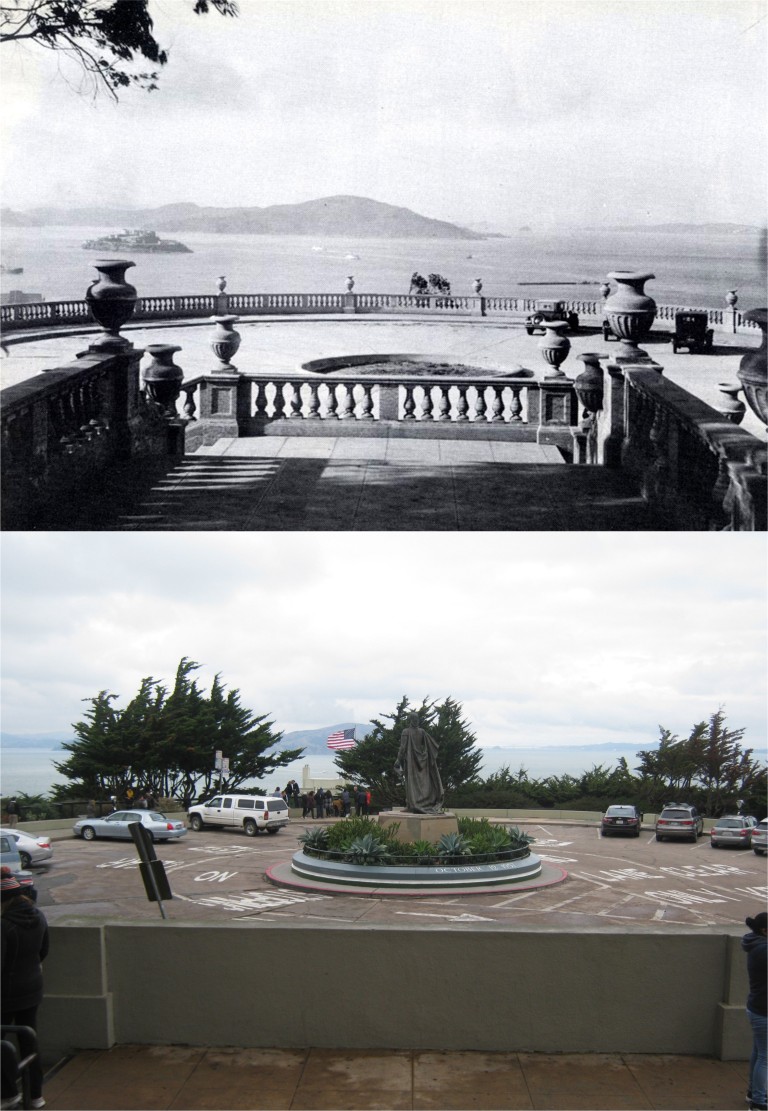 Fearing for Janet’s life with the murderer at large, Janet’s father hires a bodyguard named Spike to follow and protect her. They become friends and Janet is always able to talk Spike into going along with her schemes, like breaking and entry, as she tries to solve the murders without the help of the police. One evening Janet and her bodyguard park at the top of Telegraph Hill and go down to Montgomery Street in an attempt to break into the house where the related murder victims lived to look for clues.

{We left the cab at the top of Telegraph Hill and then walked down on the left-hand side of Montgomery Street looking at the numbers. There was a big modern apartment house and then a lot of small houses perched around the steep hill with trees and gardens and brick paths in between.}

It’s not an accurate description, and they could have been heading toward either the Greenwich Steps or down the Filbert Steps. They’re discouraged from breaking into the house by a policeman posted on duty to watch the house where the two victims lived, so they head back to the top of Telegraph Hill.

{The mud was well up around my ankles and my new navy blue pumps were completely ruined for all time before we got up to the balustrade that goes around the top of Telegraph Hill near Coit Tower. We sat on the wide stone coping to get our breath, and I wondered if wet stone was bad for mink.}

Here’s a picture taken in the 1930s of the old balustrade that went around the top of Telegraph Hill back then. It was considered unsightly and removed during the 1940s.

Janet and Spike decide to go back to the house and break in through the back way avoiding the policeman in the front. Janet can be as clumsy as she is cunning and she drops a drawer making a racket and alerting the cop guarding the house. Janet bolts out the back door hoping to lead the policeman away from Spike and they become separated. Tired and scared she looks for a place on Telegraph Hill to meet up with Spike.

{However, as I was very tired from scrambling in the mud and crouching in the mildewed shower, I was happy to see that the lights were burning cheerfully in the Tavern, which is a very arty little pub. I walked up the steps leading to the Tavern and went inside where the fire looked very welcoming and warm.}

The only Tavern Janet could have been referring to in the area was the old Shadows Restaurant on Montgomery Street. The above drawing of the Shadows is about the best menu cover I’ve ever seen. (Vintagemenuart.com) 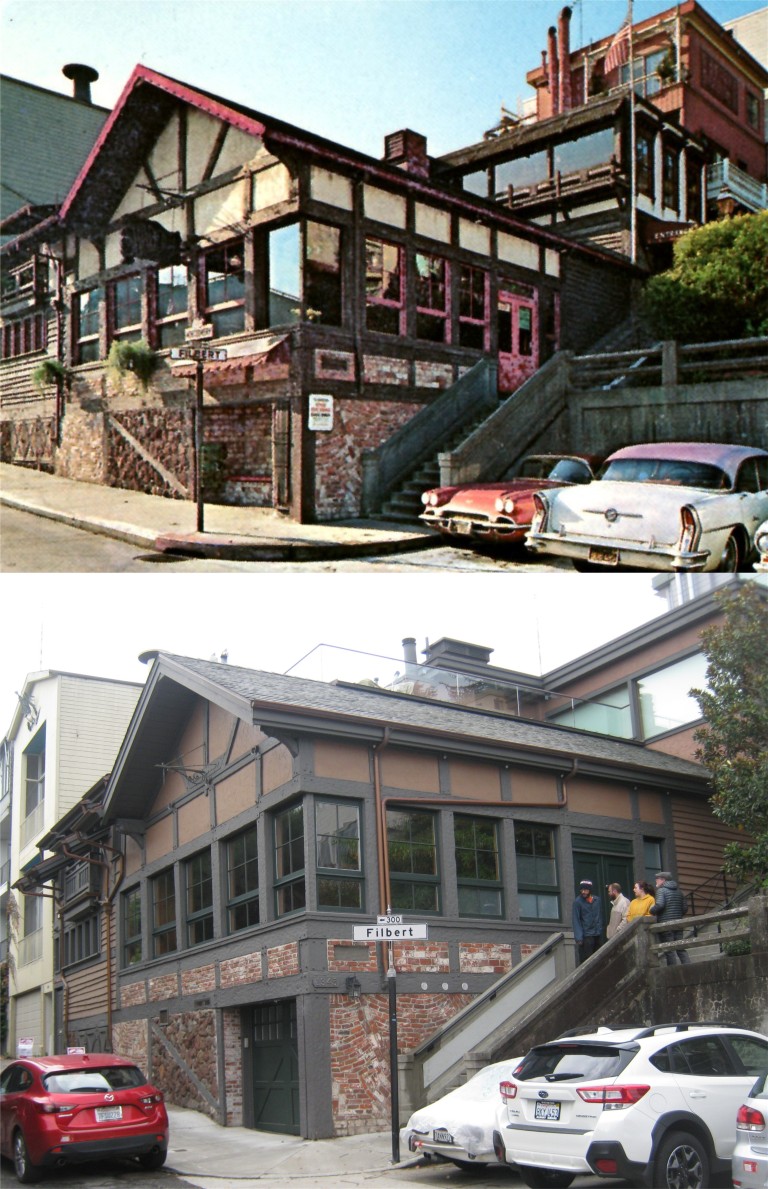 Here’s a picture during the 1950s of the old Shadows Restaurant, now closed and empty. (Flickr)

Even the legendary nightclub, the Forbidden City, gets an honorable mention when Janet has an argument with her brother, Hallet.

{“None of your business, but I’m going to see my girl” he said.

“What’s she do?” I said, speaking fast before he could get away from me.

“She works in a nightclub.”

“The Forbidden City.” He said.

My eyes bulged so far out of my head I could feel them hanging on my cheeks. The Forbidden City is the only all-Chinese nightclub in the world or something.}

Above is an old Forbidden City program and menu. (eatdrinksfilm.com)

The Forbidden City was up in the second floor of this building on Sutter Street. 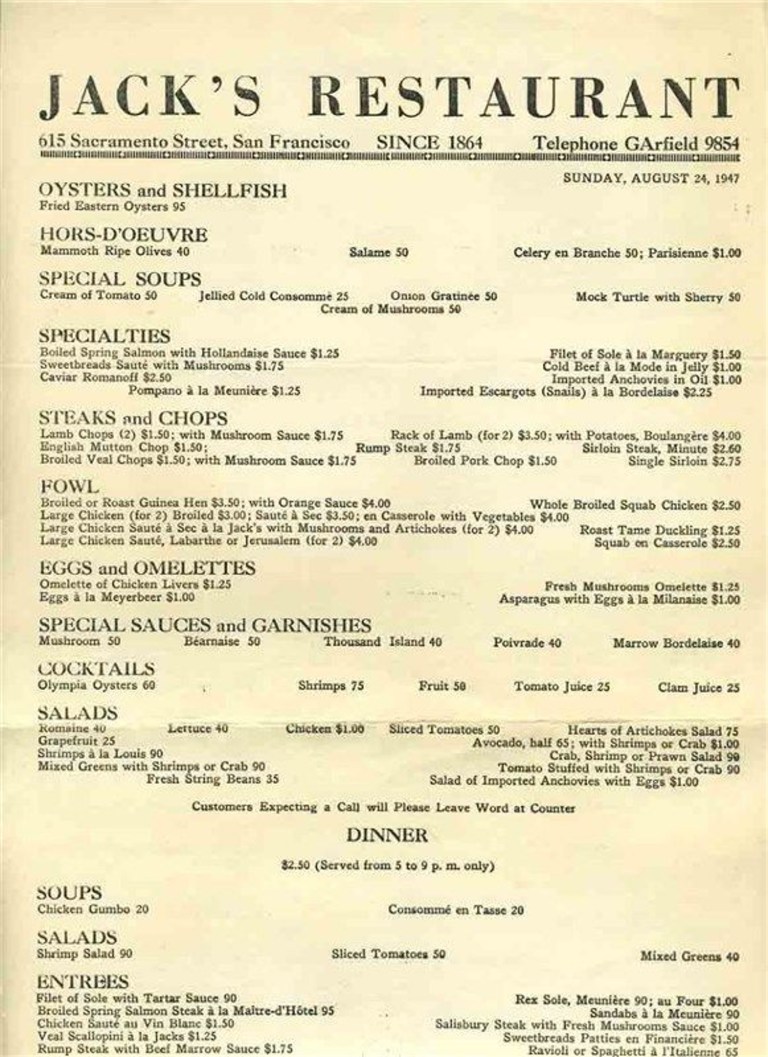 Janet, Fitzgerald, and Spike have lunch at Jack’s Restaurant on Sacramento Street near Montgomery.

{Jack’s is one of San Francisco’s finest restaurants, but no one from the East would think so just to look at it. It is housed in a rather grimy, three-story building, the two top floors being devoted to private dining rooms. The restaurant proper on the first floor sports the usual San Francisco beige walls interspersed with brightly varnished mahogany woodwork. Is epicurean and the service effortless.}

The top photo is an old 1947 menu from Jacks Restaurant. (Pinterest) 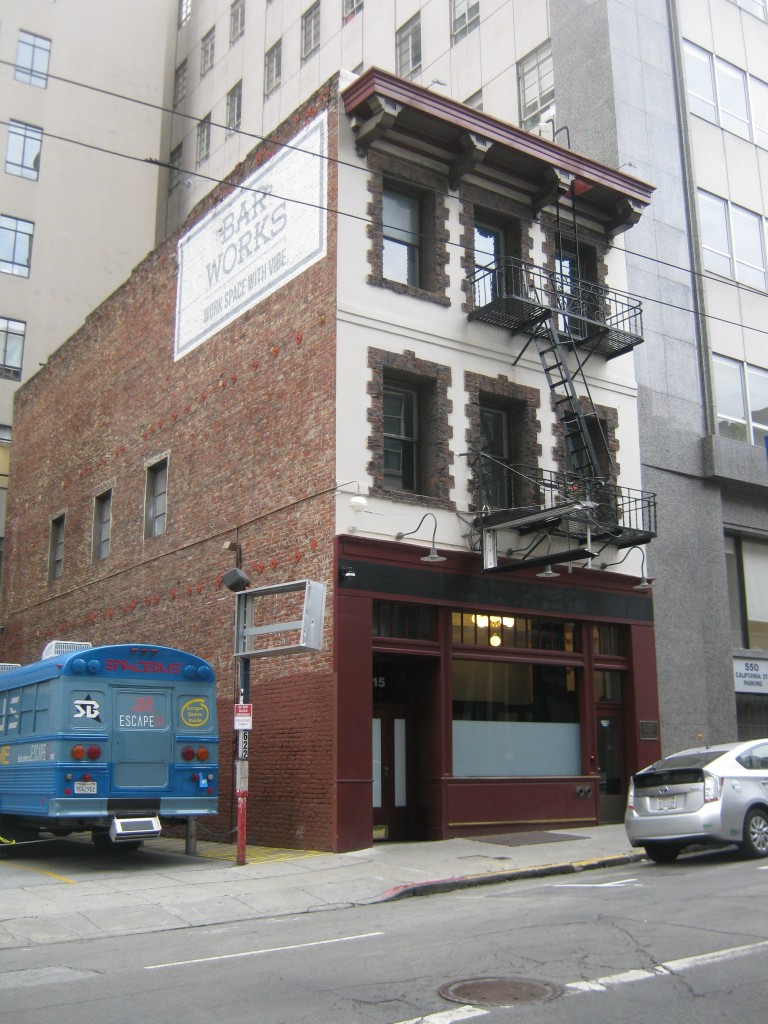 For many years, Jack’s Restaurant, the second oldest and one of the finest restaurants in San Francisco was in this building. The restaurant closed in 2009.