“It only takes a tiny corner of this great big world to make the place we love.”

Anybody who loves old movies and San Francisco will probably know what that’s from. Well, we’re into February. My, where has 2019 gone? These are a collection of comparison pictures I took over the last two weekends.

We’ll start out waaaaay back in January, the weekend before last. I’m driving into San Francisco across the Bay Bridge. All things considered, I’m not too unhappy with this one. The vintage picture is traffic heading west along the eastern cantilever portion of the bridge during the 1940’s. That’s a lot of traffic, looks like something was going on. Maybe it was a 49ers game out at Kezar Stadium with Frankie Albert quarterbacking. My picture was heading west on the new East Bay Bridge Span completed in 2013. (SF Chronicle)

This is looking east on Market Street toward Stockton Street in 1952. (SF Chronicle) 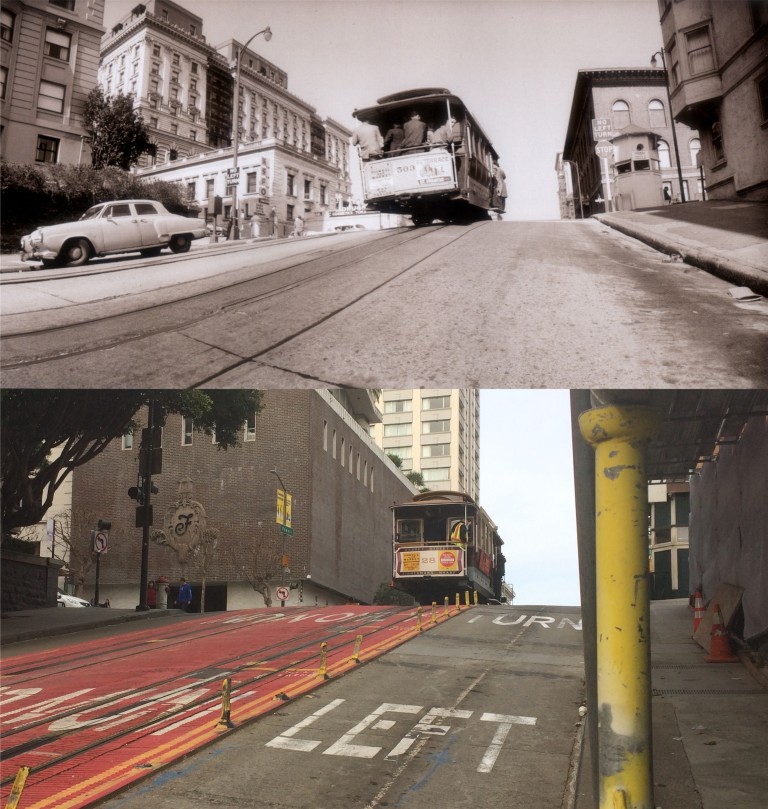 From Market Street I headed up Nob Hill for a comparison of this 1950’s photo looking north along Powell Street as a cable car climbs Nob Hill. The Fairmont Hotel on the left can’t be seen from here today due to the portion of the Fairmont Hotel and Garage completed after the vintage picture was taken. (Gene Wright)

I headed down Powell toward Union Square. These are the kind of then and nows I love to try taking. This is looking down Powell toward Sutter Street in during the 1960’s. The Sir Francis Drake and Chancellor Hotels are still there, and cable cars still “climb halfway to the stars”. (Jimo Perini) 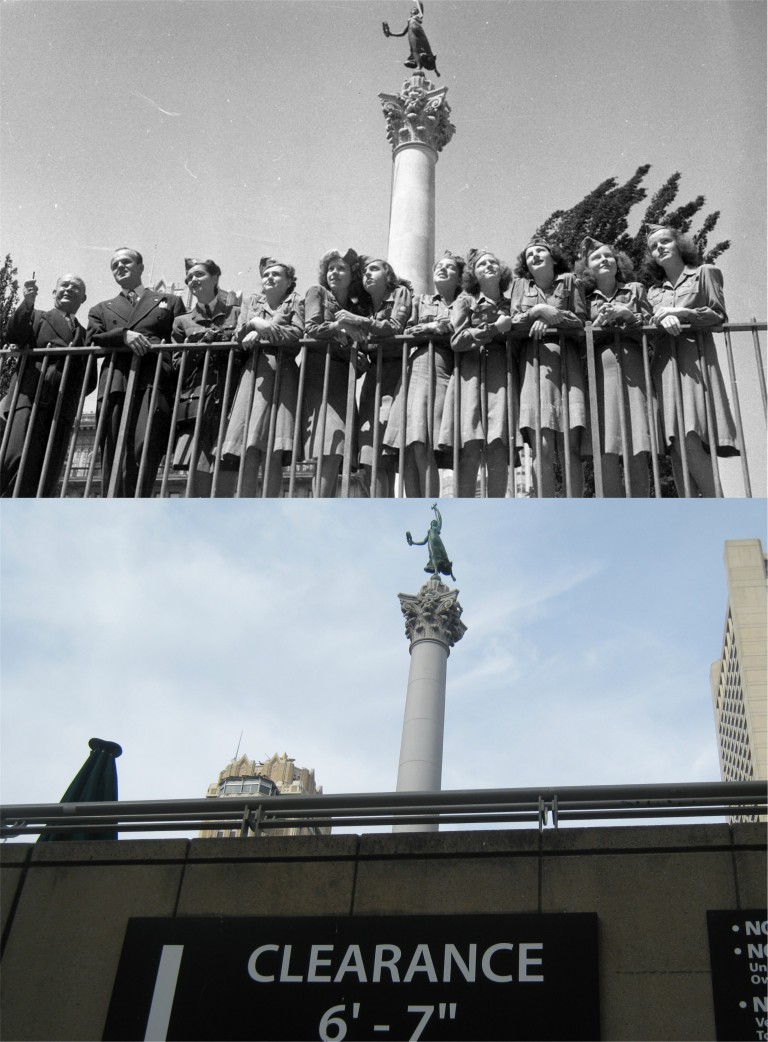 I stopped at Union Square on the way home. This San Francisco Chronicle World War Two photo of ladies of the American Women’s Volunteer Services selling war bonds was taken in September of 1942. That’s the Dewey Monument behind them. They’re looking out from above the Union Square Garage entrance on Geary Blvd.

When I got back down to Market Street, there was a pro life anti-abortion demonstration proceeding along Market Street that closed the street down from Civic Center all the way to the Ferry building. The vintage photo is a 1967 anti-Vietnam War demonstration in 1967 heading in the opposite direction of last weekend’s turnout away from Civic Center along Fulton Street.

The following weekend, yesterday, I headed back to San Francisco to close out the set, and get back in time to watch the Super Bowl. Back in my youth we used to go to a lot of plays in the Theater District on Saturdays. I don’t often anymore, it’s easier now to sit home on Saturday nights and watch reruns of ‘Gunsmoke’.  I saw some very popular plays, from ‘Evita’, ‘Curse of the Werewolf, and ‘Showboat’, to ‘Phantom of the Opera’. One of the worst plays we saw was the one that I liked the best; a dreadful thing called ‘The Boys in Autumn’ starring Burt Lancaster and Kirk Douglas portraying Tom Sawyer and Huckleberry Finn in their senior years. It was awful, but seeing those two guys together was priceless! When we went to most of the plays we always parked at the O’Farrell and Mason Street Garage, seen here in the early 1970’s. (SF Gate / SF Chronicle)

Children braving the pigeons in Union Square in 1955: In the background is the St. Francis Hotel. There is an enormous amount of San Francisco history surrounding this hotel. Actor John Barrymore was staying here when the 1906 Earthquake and Fire occurred. “Fatty” Arbuckle’s career was ruined in 1921 when he was accused of raping a girl in the hotel and causing her death. Like the clock at the Waldorf-Astoria Hotel in New York, many people met at the clock in the St. Francis during World War Two. In 1975, Sara Jane Moore tried to kill President Gerald Ford with a handgun as he exited the hotel. In September of 1944, one of the most significant military decisions of World War Two was finalized during a three day conference in the northeastern wing of the St. Francis Hotel. I’ll go into this next. The northeastern wing of the hotel is the first wing just to the left of the Dewey Monument in these pictures. (Gene Wright)

In the opening chapter of James and William Belote’s book about the battle of Okinawa, ‘Typhoon of Steel’, the authors write about a three day conference held in the northeast wing of the St Francis in September of 1944 to determine the final campaigns of the Pacific Theater of World War Two; whether the United States would invade the island of Formosa or the islands of Iwo Jima and Okinawa as Admiral Nimitz and General McArthur, who were not at the meetings, had agreed upon earlier in Hawaii.

“The conferees gradually relaxed as the three days of deliberations got into full swing Perhaps the luxurious surroundings of their hotel suites had something to do with it. Within the limits of its wartime rationing allowance, the St. Francis served excellent meals in an elegant surrounding of fine oak and mahogany paneling in (Admiral) King’s suite.”

The conference ended with the decision to invade Iwo Jima and Okinawa, so it’s not far-fetched to say that the final agreement that led to these two battles was made in the St. Francis Hotel. Considering the staggering loss of military and civilian life in the battles of Iwo Jima and Okinawa, it will have to be left to posterity to decide if this was the right decision. There’s always the argument that the development of the atomic bombs the following year made the campaigns unnecessary, but no one could have known that at the time. 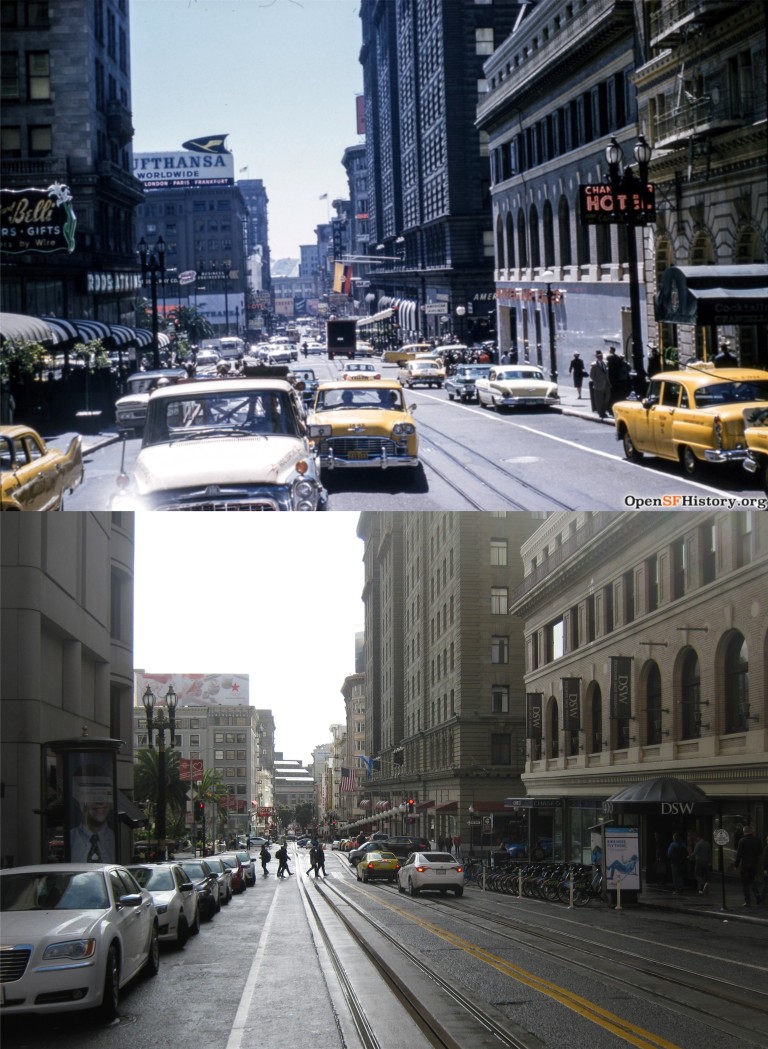 Looking down Powell Street toward the St. Francis Hotel in August of 1962, and a rainy February in 2019: The northeastern wing of the St. Francis on the corner of Powell and Post Streets is in the center of the two photos: (opensfhistory.org)

In case you’re not familiar with the title of this post, click on the link below. I know it’s as corny as can be, but it’s still a showstopper!