I read somewhere that Fisherman’s Wharf is the second largest tourist attraction in California after Disneyland, and I believe it. During the summer, you often can’t tell the difference by crowd size of either. But winter is closing in and Fisherman’s Wharf has quieted down a little. ‘I Wonder as I Wander’; that’s an old Christian folk song from the 1930’s, popular around Christmastime. I had the song stuck in my head as I was taking these pictures. I sometimes wonder as I wander around San Francisco too, although not always with religious bewilderment, like the person in the song. Today, I was wondering what makes Fisherman’s Wharf so special, and it is special. True, the views of the Bay from certain spots here are stunning, but I doubt if most of the tourists ever see them. Sometimes it seems that the majority of the crowd accepts an hour or two of overpriced parking just to linger around the north end of Taylor Street past Jefferson. That’s okay too, it’s good for business. Me, I usually like to wander around where the bilge rats (the real ones) take their shore leave. Sometimes, it’s kind of  fun to explore the back areas of Fisherman’s Wharf and pretend that you’re a scalawag just off of a ship looking for an opium den, or something like that. However, most vintage pictures were taken at the tourist spots, like the pictures in this set, and they’re fun to visit too. 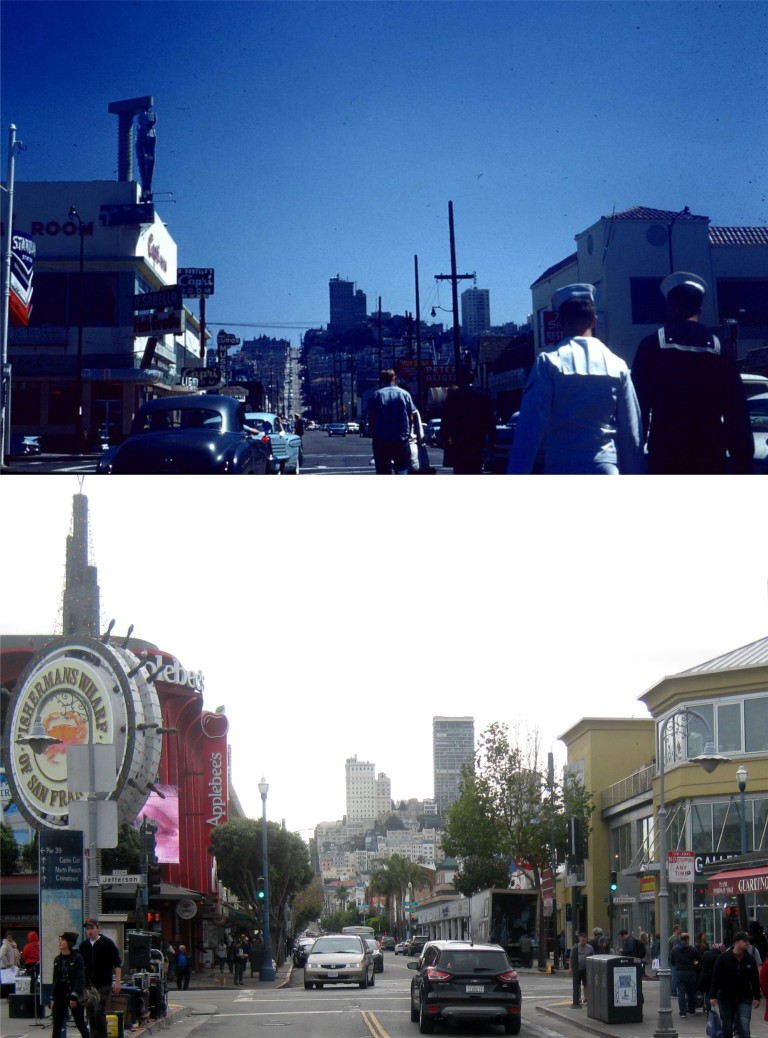 Taylor Street, looking south toward Russian Hill from Jefferson Street: I couldn’t get a date of this picture from skyscrapercity.com, but it looks like the mid to late 1950’s: Notice the Standard Station on the left in the vintage picture. There was a gasoline station on the northeast corner of Jefferson and Taylor Streets from the 1930’s until the mid 1970’s. Originally it was designed to look like a ship, as you’ll see in the next picture. 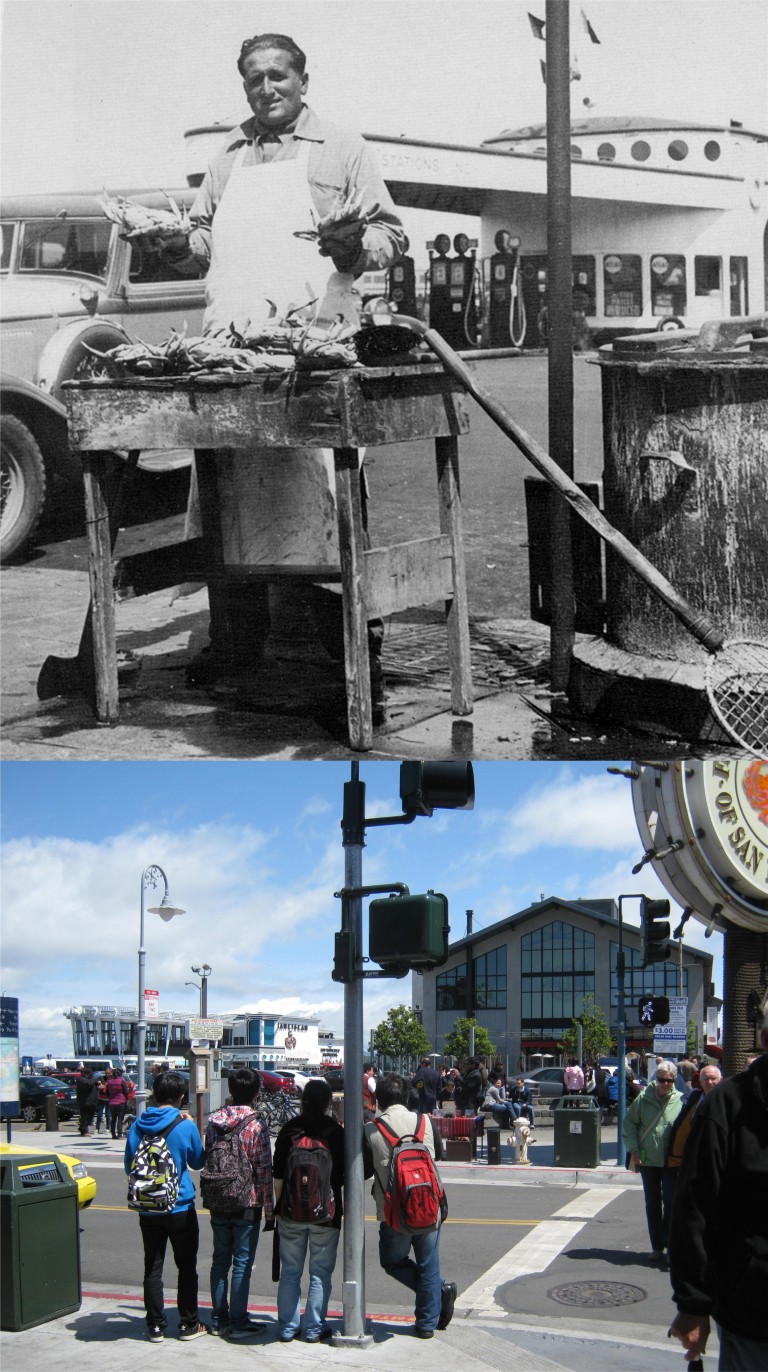 This was a photo I took a few years ago looking northeast across Taylor Street toward where the SS Fill ‘Er Up, or whatever it was called in the 1930’s, once was. By the mid 1960’s the station was remodeled into a more  conventional and less interesting look. 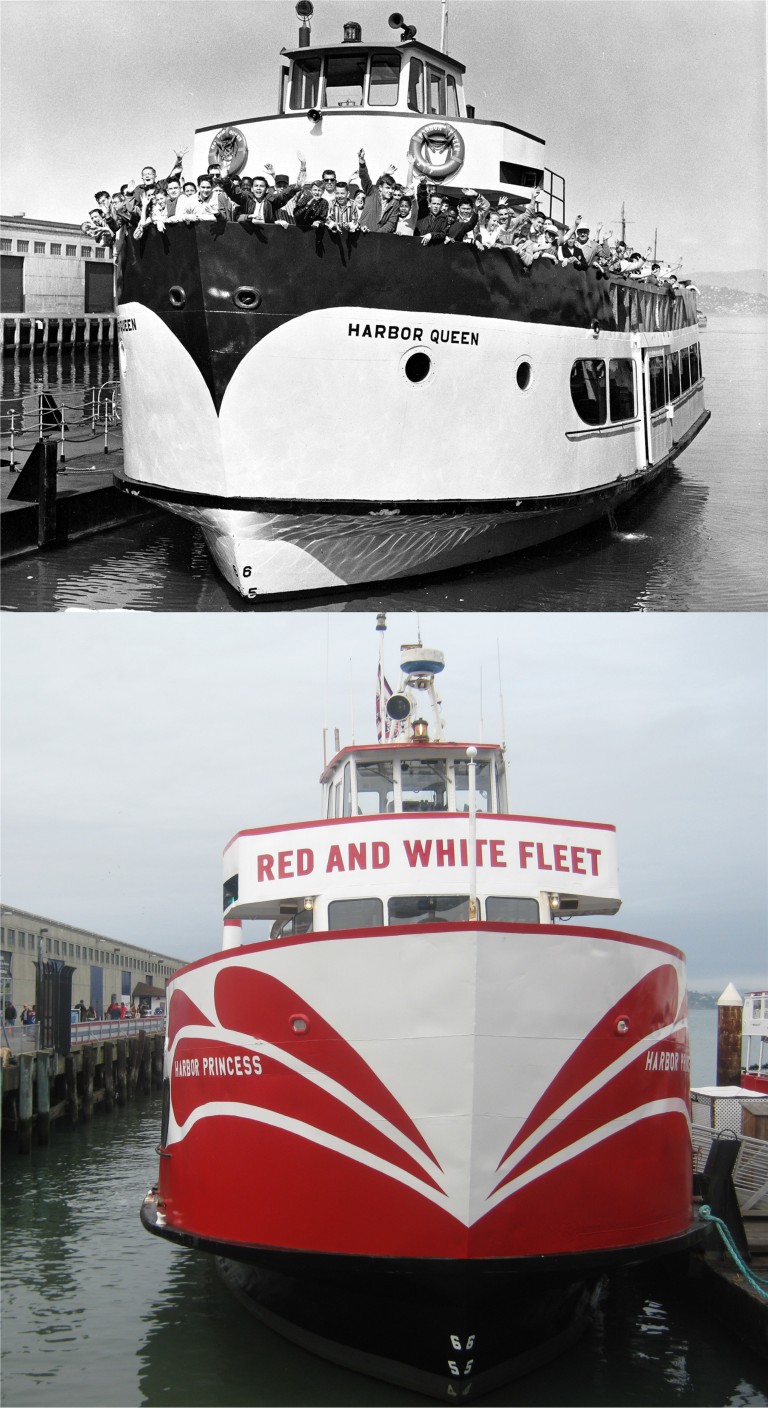 Don’t let the locals fool you; the Red and White Tour Boats are not just for tourists.  Like the Blue and Gold fleet, they are a relaxing boat ride with beautiful views of San Francisco that anybody can enjoy. Here’s a boatload of people getting ready to sail in 1950. (redandwhite.com) 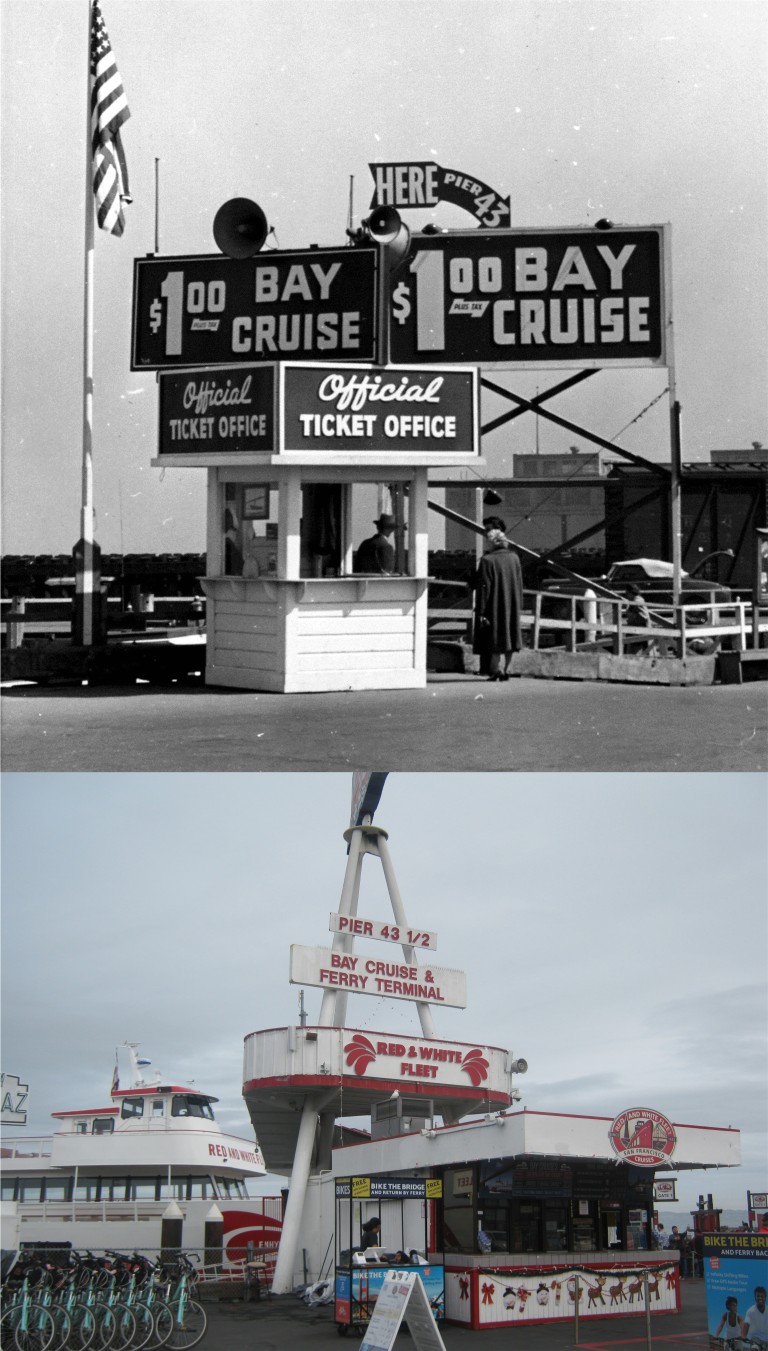 The old ticket office for the Red and White tours in 1940:  (redandwhite.com) 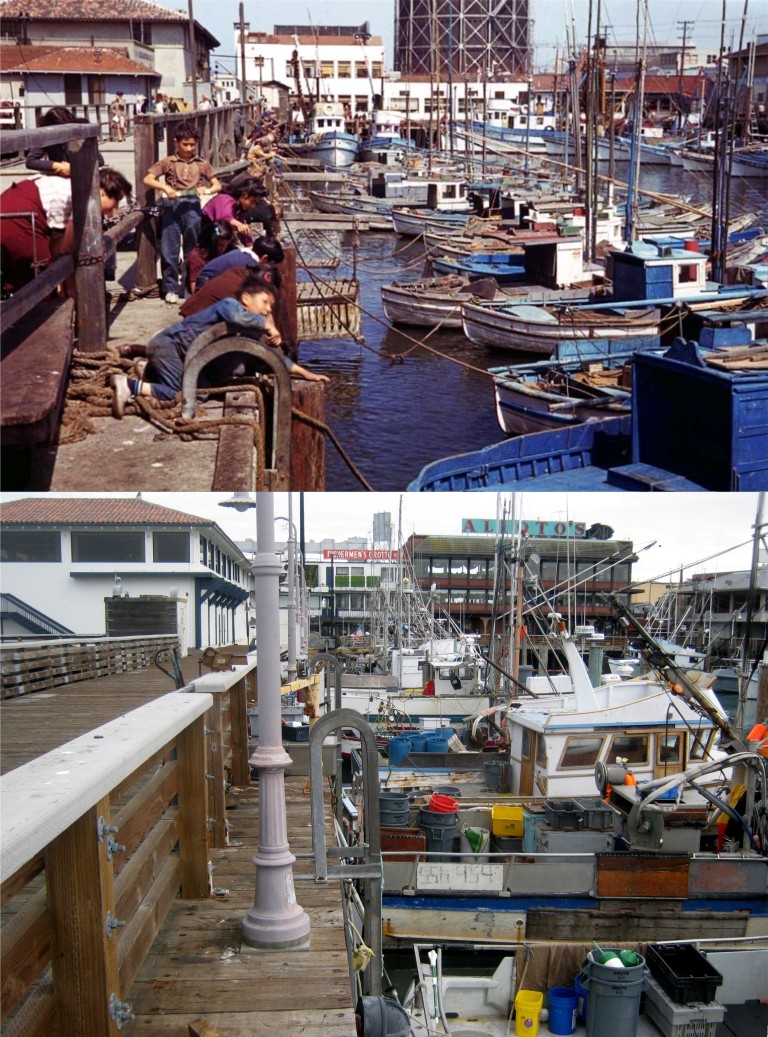 Fisherman’s Wharf Boat Lagoon in 1940: This is not only my favorite from the Charles Cushman Collection, but it’s also one of my favorite San Francisco pictures. 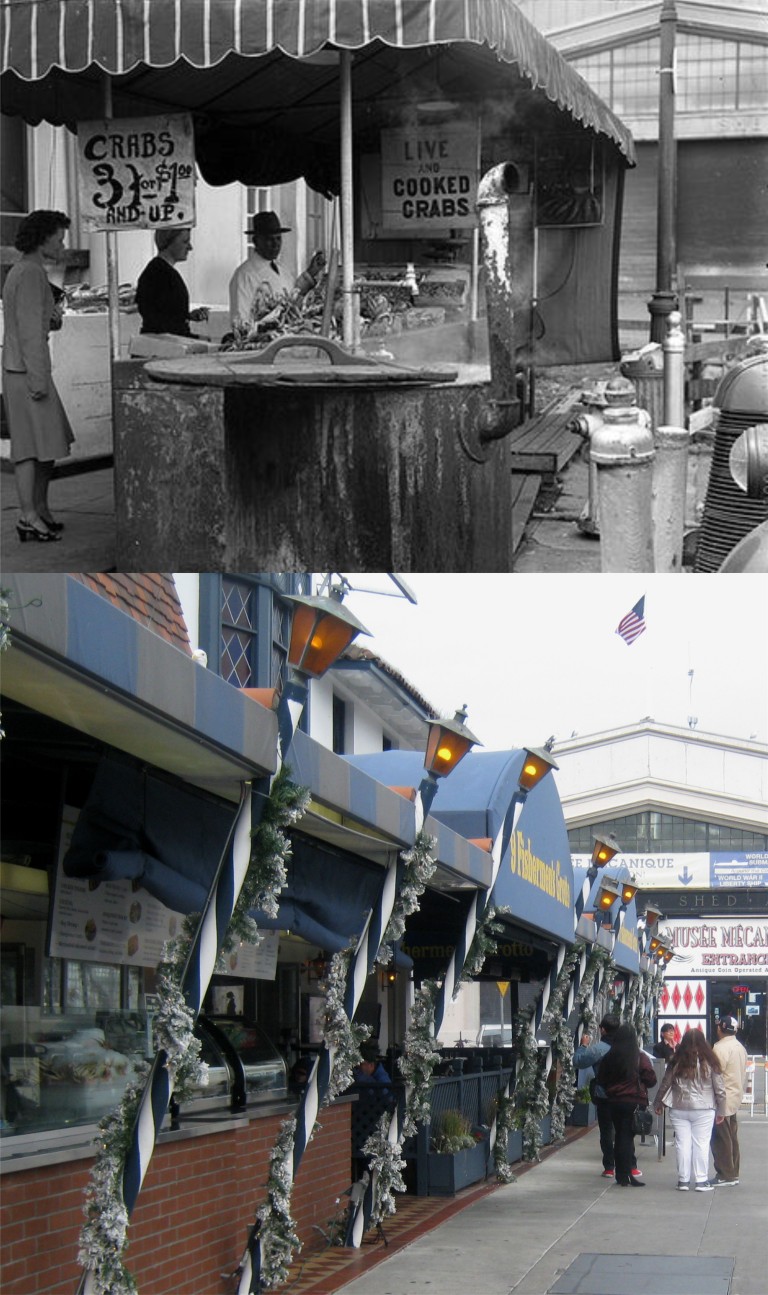 In 1935, Fishermen’s Grotto Restaurant at Stall Number 9 opened up on Jefferson Street. This view is at the front of the old restaurant looking toward Pier 45 in the 1930’s. (Gene Gallagher Photos) 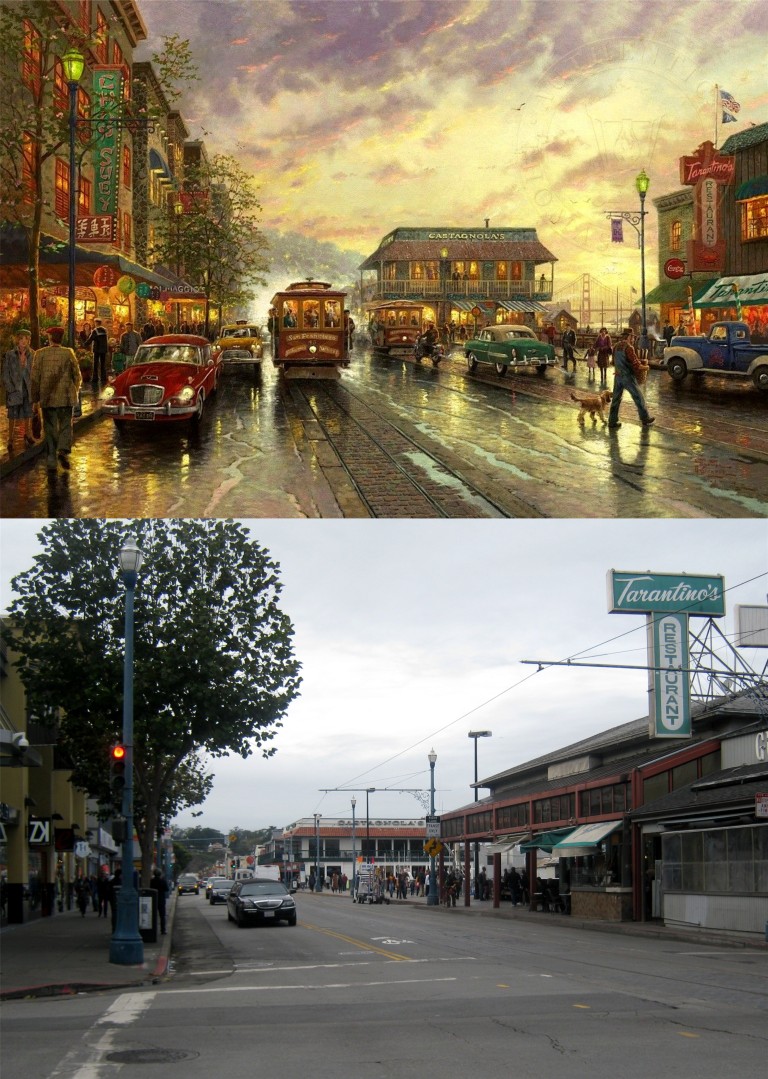 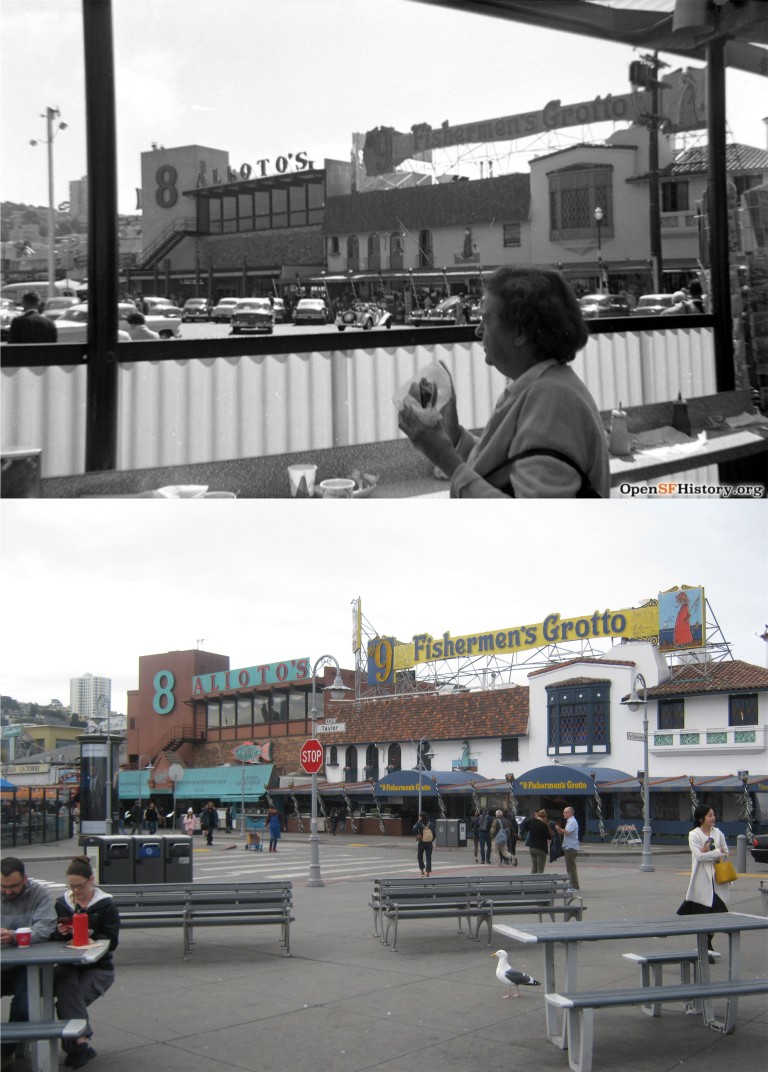 This view has changed little since 1958 in this picture from opensfhistory.org, and I think it’s a fitting photo. Possibly, most people do come to Fisherman’s Wharf for the food.