Yesterday, I got a chance to explore Golden Gate Park from end to end. My main idea was to visit some of the lesser know areas of the park, although I stopped at some of the high traffic locations, as well. There’s always some new history to discover there through the courtesy of http://opensfhistory.org/, where these vintage pictures are from, as well as revisiting interesting or beautiful locations in the park that have stories that I’m familiar with.

We’ll start out on the eastern side of the park at the McLaren Lodge. That’s a 91 year old John McLaren at the entrance to the lodge in 1937 where he lived until his death in 1943. McLaren was the Walt Disney of Golden Gate Park where he was superintendent for 53 years, and we have him to thank for what’s there today. He looks a little grumpy! Possibly some foolish subordinate was telling him he was too old for the job.

The old Police Station on the southeast side of the park in 1957: I wanted to be carefully quiet when I took this picture; I couldn’t remember if I paid that parking ticket that I got 10 years ago in San Francisco. 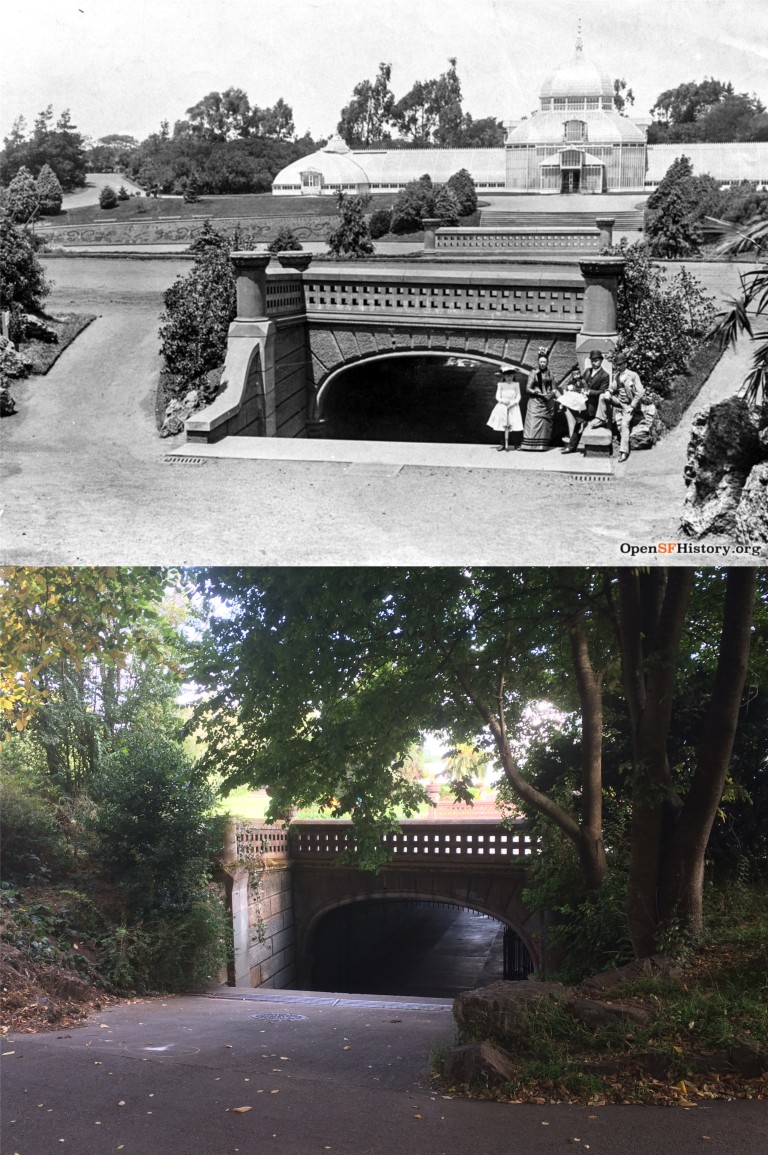 The tunnel that crosses under John F. Kennedy Drive to the Conservatory in the 1890’s when the road was called the North Drive. 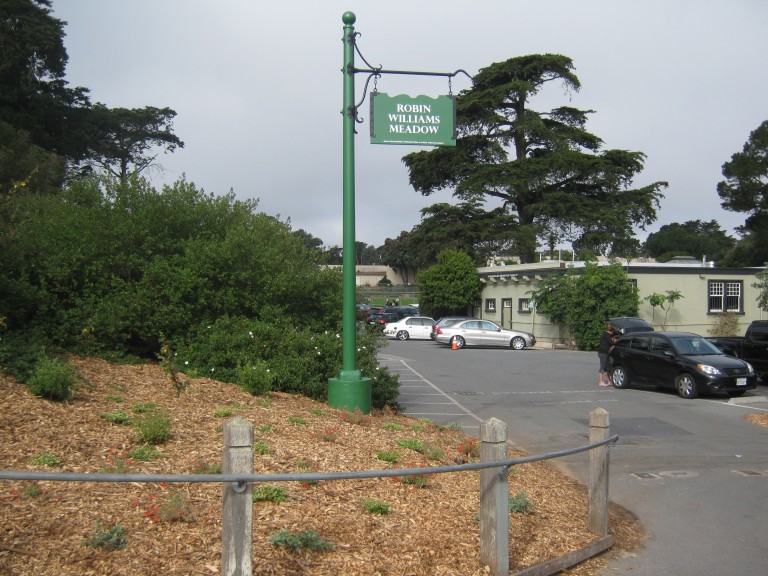 This past Friday, the new sign was unveiled officially completing the name change of Sharon Meadow.

There really were elk in Elk Glen Lake once, at least in 1939. 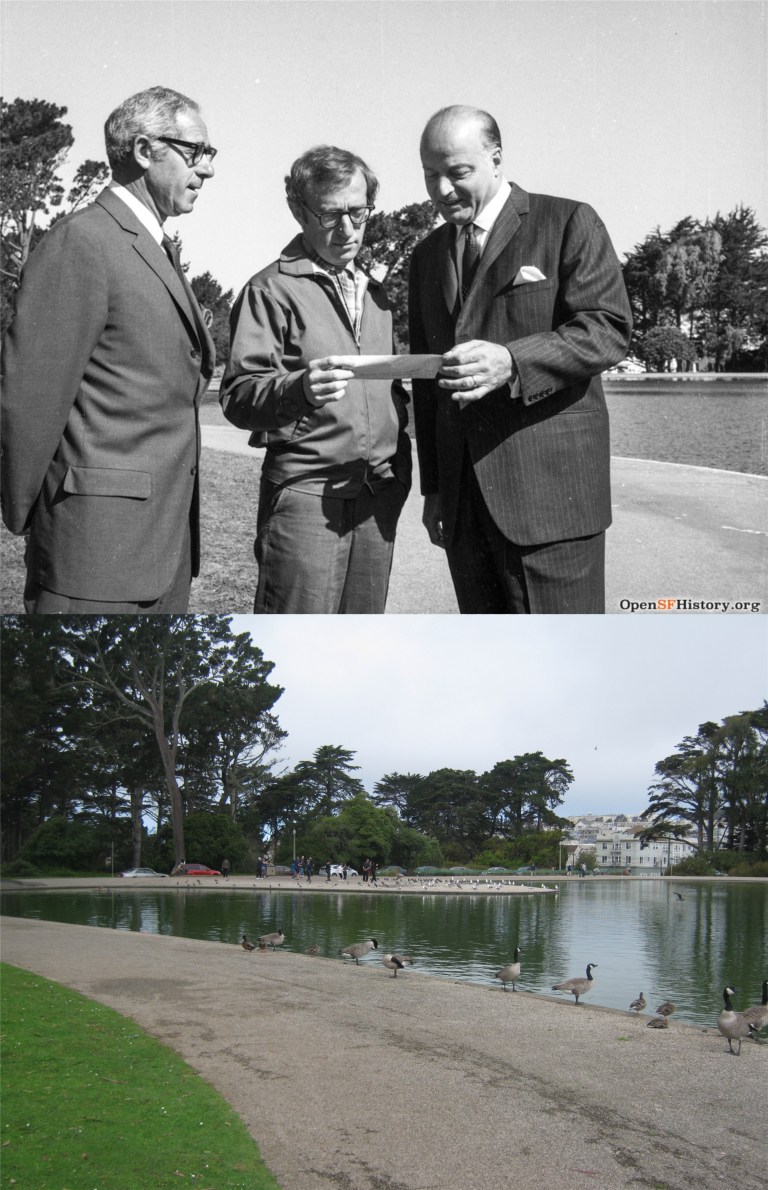 Woody Allen with Mayor Joseph Alioto on his left at Spreckels Lake in 1969: It’s hard to think of anything weirder than that! Woody Allen was in town filming scenes for his movie ‘Take the Money and Run’ at the time. 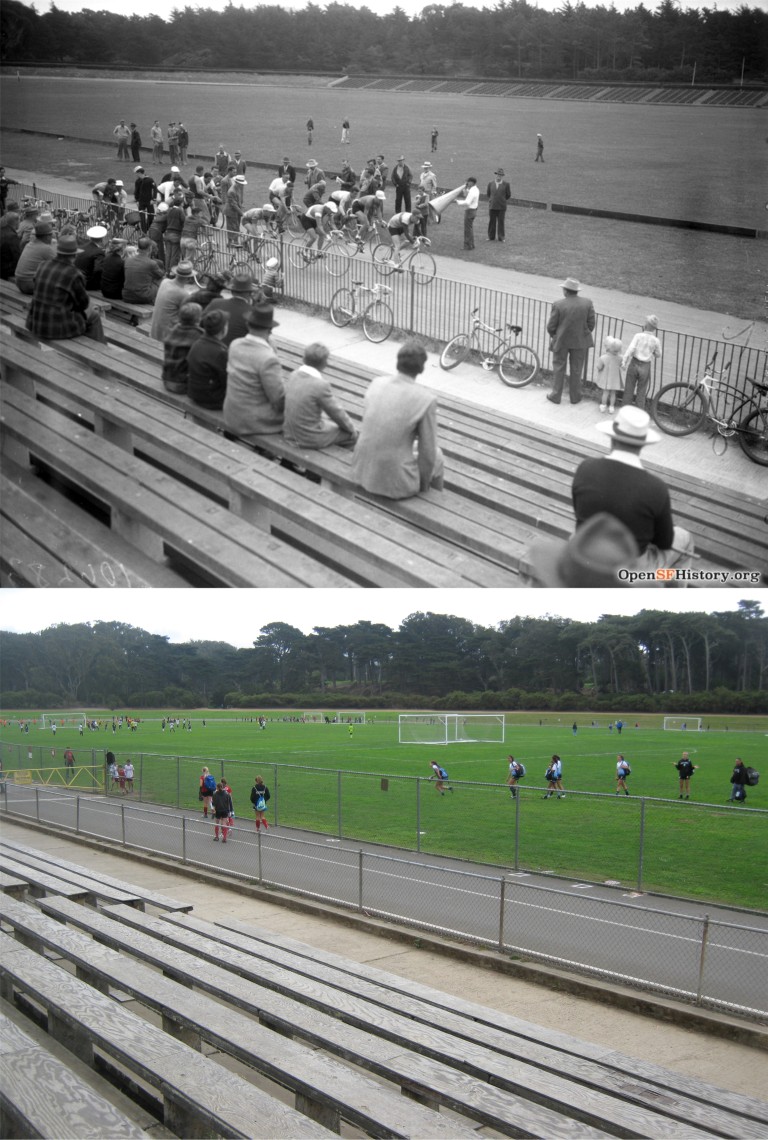 A bicycle race at the Polo Fields in July of 1945: It looks like there was some type of seating across the field on the south side once, as well.

Hey, he really was fat! In 1911 President William Howard Taft broke ground for the upcoming 1915 Panama Pacific International Exposition on the north side of the Polo field in Golden Gate Park. The reason for this was because the official site for the approved fair hadn’t been selected yet.

And there’s a grim history to the park, as well. In May of 1934, 23 year old Louise Jeppensen (some accounts state age 24) was raped and murdered here at the entrance to the north side tunnel to the Polo Field. An engineer named Millard Hickman was arrested but later acquitted. Her body was found by a caretaker in the park; that may be the caretaker and an investigator looking down at her body. Sadly, in October of 2015 another 23 year old, Audrey Carey, was murdered in Golden Gate Park not far from this spot. Three suspects have been arrested in that case. 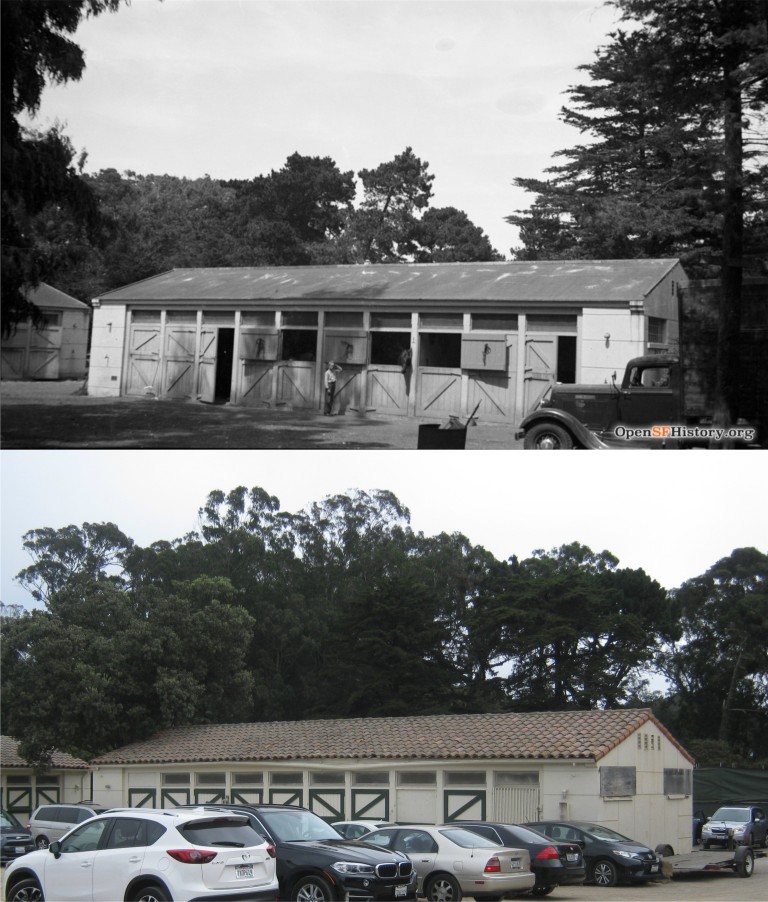 “They (stable) horses, don’t they?” Not anymore at the old horse stables seen here in 1947, although, there still is a small stable for police horses here. 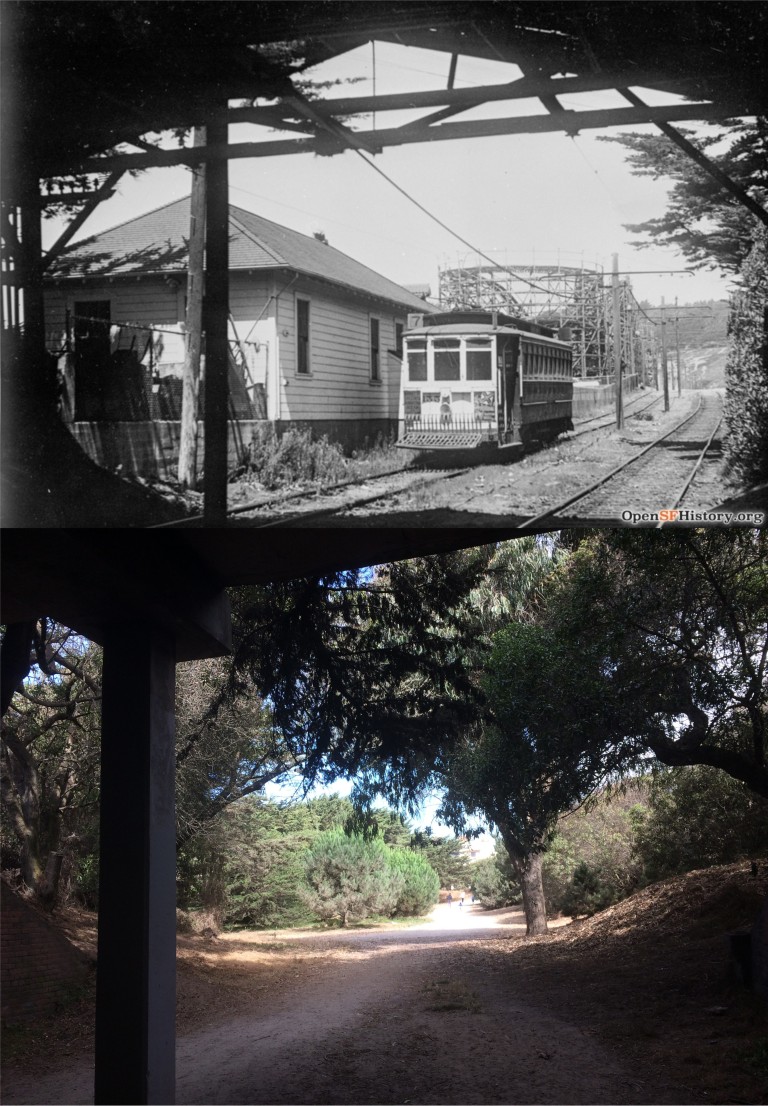 A 1943 photo looking out from the tunnel that ran under North Drive near the Dutch Windmill as a streetcar passes. That’s the roller-coaster at Playland-at-the-Beach in the background. The tunnel is still there, but Playland and the streetcar line that ran across the west end of Golden Gate Park are gone. 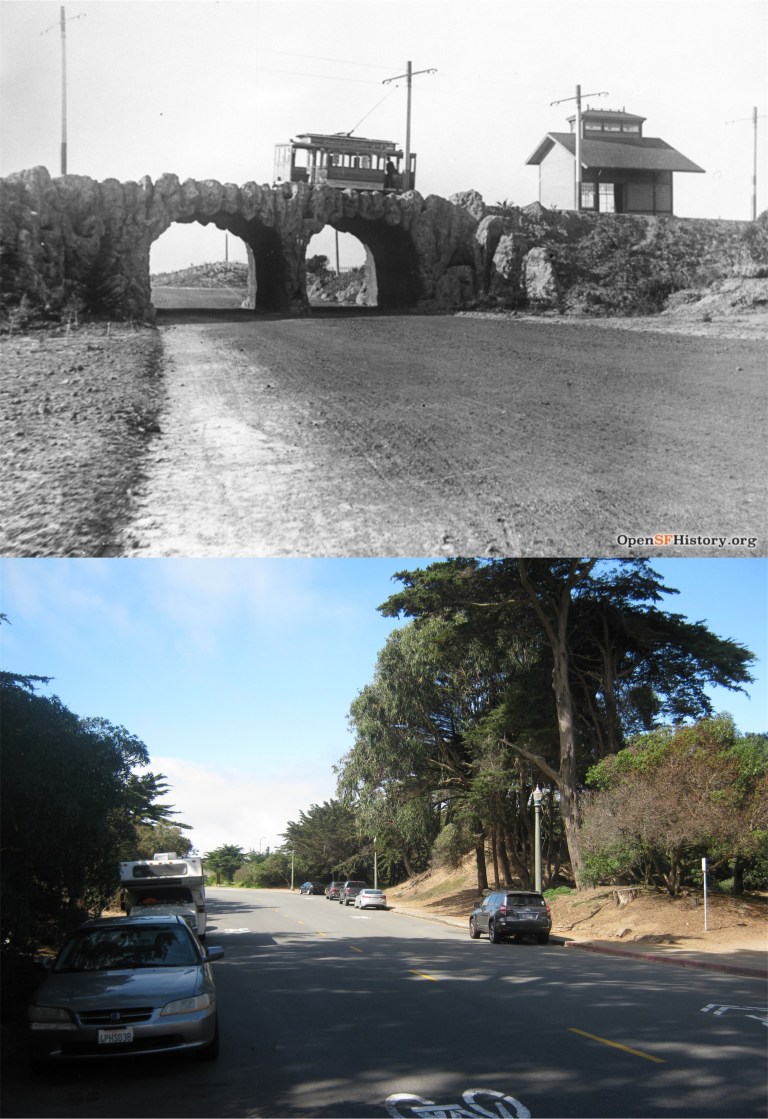 We’ll end up on the southwestern side of Golden Gate Park with a westerly view of the old streetcar bridge that crossed over South Drive (now Martin Luther King Jr. Drive) near the Murphy Windmill, seen in 1900. The hill behind the tree on the right was where the north side of the bridge was anchored.