I never paid much attention to Gertrude Atherton. I know about her as a “strong-willed”, snobby San Francisco socialite and author that many consider the grande dame of San Francisco (I’d give the nod to the Ferry Building on that) who, probably, wouldn’t have liked me very much, anyway. I found a copy of a first edition of one of her last books in the San Francisco Library Bookstore called ‘My San Francisco’ published in 1946; Gertrude Atherton died in 1948 at age 90. It’s pretty slow going for the most part, but it does have some interesting moments and fine vintage pictures courtesy of Californians Incorporated, a historic picture collection that I couldn’t find any information about. I discovered a haunted house, a murder mystery that looks like it’s going to be good, and encountered the warmest weather ever recorded in San Francisco working on this project. Three of the location pictures in this post, the Opera House, the Atherton Mansion, and the Humphrey House location on Chestnut Street were taken yesterday when San Francisco hit the highest temperature in its recorded history of 106 degrees Fahrenheit! 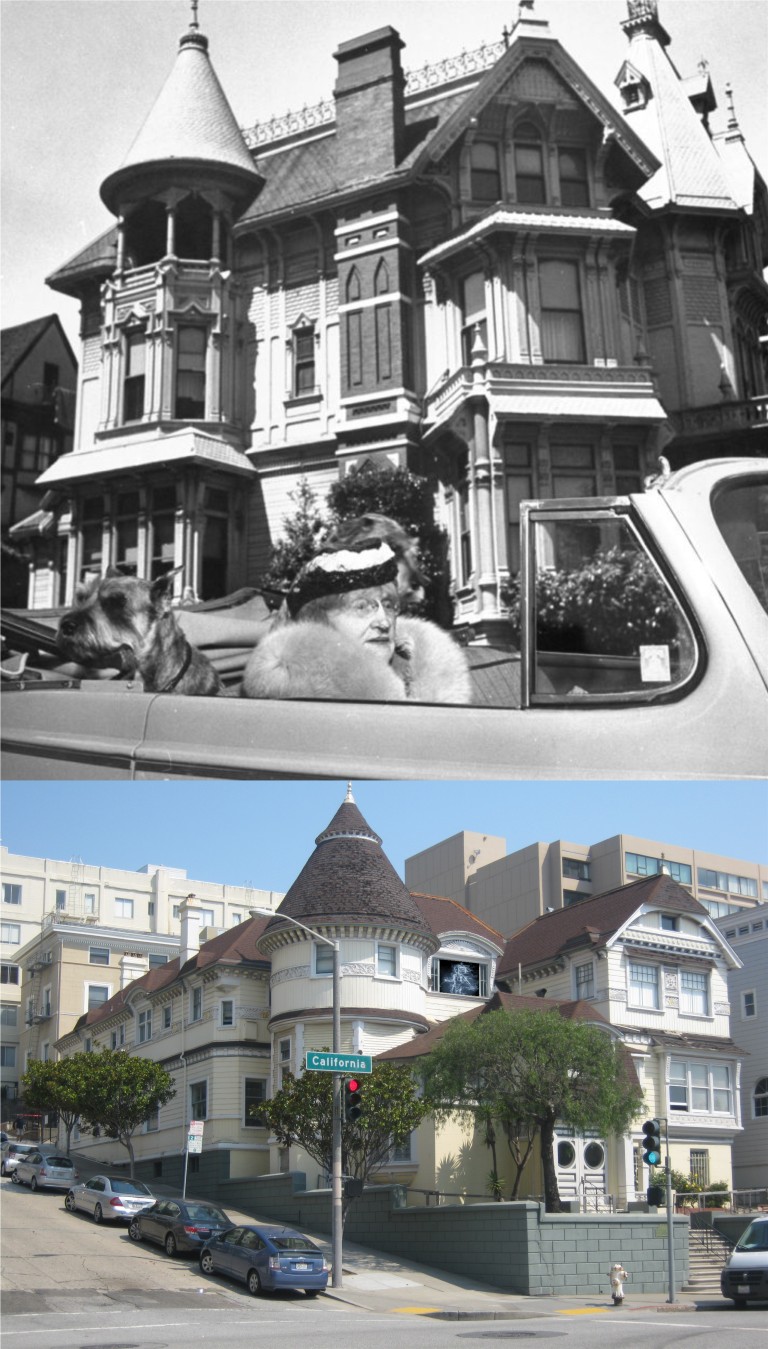 The top picture is described as being of Gertrude Atherton in front of her San Francisco home. It probably isn’t the famous Atherton Mansion on California Street that she lived in until 1923 when it was then remodeled because the photo looks like it was taken close to the end of her run in 1948 long after she left there. The Atherton Mansion in the bottom picture is reputed to be haunted by a number of ghosts. Of course, there isn’t a house in San Francisco looking like this one that isn’t haunted. It simply isn’t allowed! Hmm, it didn’t look haunted to me!

The book is autographed “To My San Franciscan” from who looks like someone named “Ann”. Don’t imagine I’ll ever know who they were.

The vintage pictures are fun to look at and one of them cost me money! This one is looking down California Street from near Stockton with the Trafalgar Building, seen in Bob Hope’s 1948 movie ‘My Favorite Brunette’ on the right. It must have been a hotel once.

Sun Yat-sen sat on a hill. No, that’s not a proverb; Beniamino Bufano’s statue of Sun Yat-sen at St. Mary’s Square in Chinatown was once on a hill.

The old Opera House on Van Ness in what looks like the mid 1930’s. “Kill the wabbit! Kill the wabbit!” Who from my generation didn’t learn about the opera from Bugs Bunny and Elmer Fudd in ‘What’s Opera, Doc?’

Of course it has the obligatory view of the Great Highway from Sutro Heights, also from the 1930’s. I’ll bet I’ve been to Ocean Beach hundreds of times, but I’ve never seen it that crowded, although, it may have been yesterday! I didn’t make it out there.

The book has a photo from the Top of the Mark when dinner jackets were required and you didn’t go there unless you were dressed up. There was always an air of sophistication by most of the visitors. Obviously, the rules have relaxed a little up there today.

On page 128 of the book was a picture of something called the Giffen-Humphrey House of which I had never heard of. The picture is courtesy of Frank Giffen. While reading into the book I learned from Gertrude Atherton about an authoress named Mary Collins who wrote a murder mystery called ‘Sister of Cain’. Mrs. Atherton writes of the house and Mary Collins, “The scene of action of Sister of Cain is that weird old Humphrey-Giffen house on Chestnut Street and the sinister atmosphere she caught in such perfection that the book drove many readers to loiter past it and enjoy a renewal of those shudders beloved by the mystery fans.” That hooked me, and I knew I was going to be loitering past it soon myself once I found out where on Chestnut Street it was located at. A Kirkus Review of the book on the internet reads, “One of the best mysteries I have read in many a moon.” The key figure of the book is Hilda Moreau who “has gone to be near her Navy husband’s sisters and bear his child. Almost at once she is drawn into the vortex of a morbid situation, as the eldest sister attempts to block the carrying out of a strange will by violent and cruel means. She is killed and her secret life comes to light. Sex crazed Sophie, alcoholic Elise, terrified Rose, all are in thrall; only Ann, a doctor, has in part escaped her sister. There’s another death, and another– and an attempt on Hilda’s life before the killer is found.” That was all I needed to plunk down $16.69 on the internet for a copy of the book that I’m waiting for to arrive. I’ll let you know how it is. However, I had a hard time finding where the Giffen-Humphrey House was located at on the internet until I found a story about it from a October, 2011  blog called Alizee by a gentleman named James Williams who writes that he lived in the house around the time that Gertrude Atherton’s book was written, and who may have even been the boy on the porch in the photo from her book. He writes that it was built in 1852, and was the oldest house in San Francisco at the time. The house sat on the northeast corner of Hyde and Chestnut Streets and, unfortunately, was demolished in spite of efforts to save it. Included above are my picture yesterday of where the house once stood and a drawing of the house from the 1940’s by Evelyn Curro. So, there’s my Giffen-Humphrey House story; I don’t usually write passages this long on my blog. I guess a prolific writer like Gertrude Atherton brought that out in me, but she would have written it much better.