Nob Hill got its name from the word “nabob” that originated from the country of India meaning a person of wealth, power, and influence. This was where the railroad tycoons of the Nineteenth Century built their mansions. Nabob is not a common word used in the New Millennium. We’ll start at California and Jones  in 1950. The vintage pictures are from opensfhistory.org. I’m having more fun with their site! Seen in both pictures are the Huntington Hotel at right center, the Fairmont Hotel at left center, the Pacific Union Club Building in front of the Fairmont, and part of Grace Cathedral on the left, although the church was not completed by 1950. 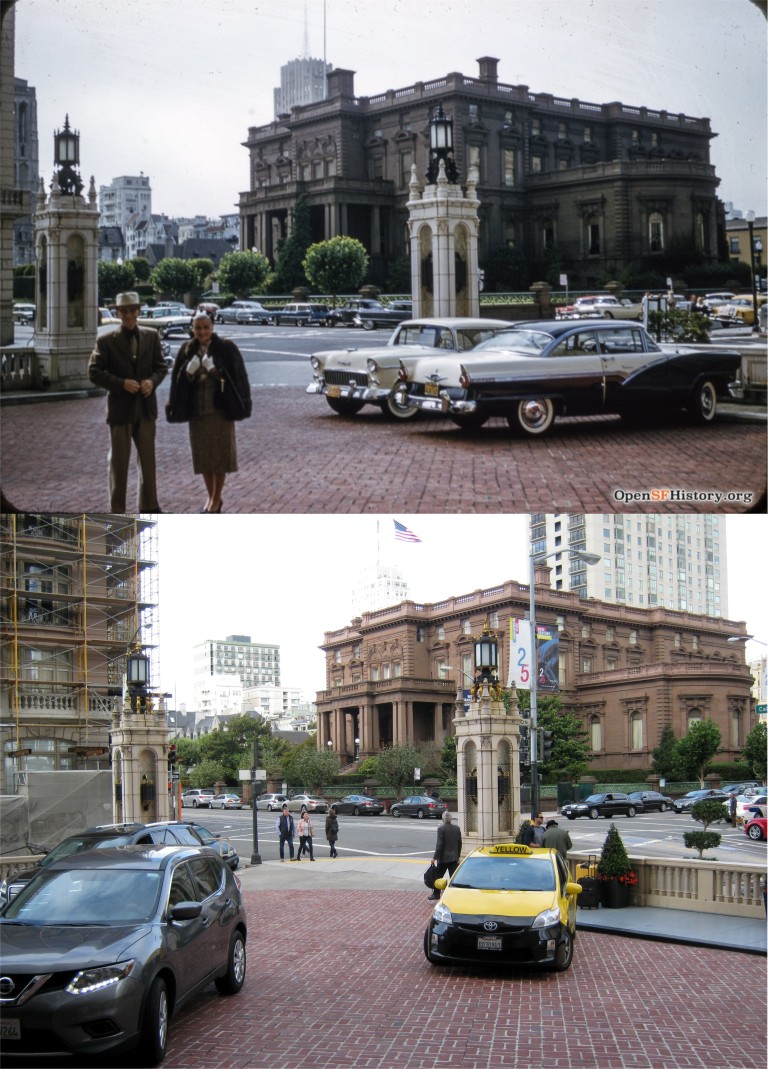 Watching the mucky-mucks come and go in the Mark Hopkins Hotel Courtyard: “Mucky muck” is outdated slang meaning a person who is high up in the corporate world. I always thought that it sounded like a children’s breakfast cereal; “Kellogg’s Mucky-Mucks”

Cable cars don’t stop for dames at Powell and Pine Streets anymore, as they did in 1952, they zoom right past now. You have to get your picture quickly. A “dame”, when use as slang for a woman, is another expression that didn’t survive into the New Millennium; I kind of like it!

A trolley and a motor bus at the Stockton Tunnel: The Stockton Tunnel is on the eastern slope of Nob Hill. “Trolleys” when referring to a streetcar like the one in the vintage 1950 picture, isn’t heard too often in San Francisco anymore. It’s usually used by out of town visitors when referring to the cable cars. THEY’RE NOT TROLLEYS, THEY ARE CABLE CARS!!! A “motor bus” like the one in my picture, is another expression, like “picture show” and “ink pen” that got cut in half over the years.