To me, the most historic Bay Area film location is in sleepy little Niles, California. This is where the world came to know of Charlie Chaplin’s “little tramp”. The top image is of the Essanay Studio where probably the greatest clown in cinema history was created. The old picture was taken shortly before the studio closed. Chaplin filmed a scene of a confrontation with a policeman in his film ‘The Champion’ on the corner where the two children are standing. Today a fire station is located here.

The Hotel Wesley, where Charlie Chaplin stayed while he was filming in Niles, when he wasn’t crashing at Edna Purviance’s house down the street: This building has changed very little in over a hundred years!

Edna Purviance, on the far left next to Chaplin, was his leading lady in most of the movies he filmed in Niles, and she stayed in the house behind them while she was in town. And yes, they were horsing around, but Chaplin got bored of the Niles night life, and left for Southern California. Well, after all, it was only a one-horse town! Edna’s little house has survived, as has the building next to it where Chaplin originally premiered his movies shot in Niles.

The best movie Chaplin made in Niles was his 1915 short ‘The Champion’ with Edna Purviance. This movie was shot entirely in downtown Niles, mainly on the corner of G Street and Niles Blvd. where the Essanay Studio stood. 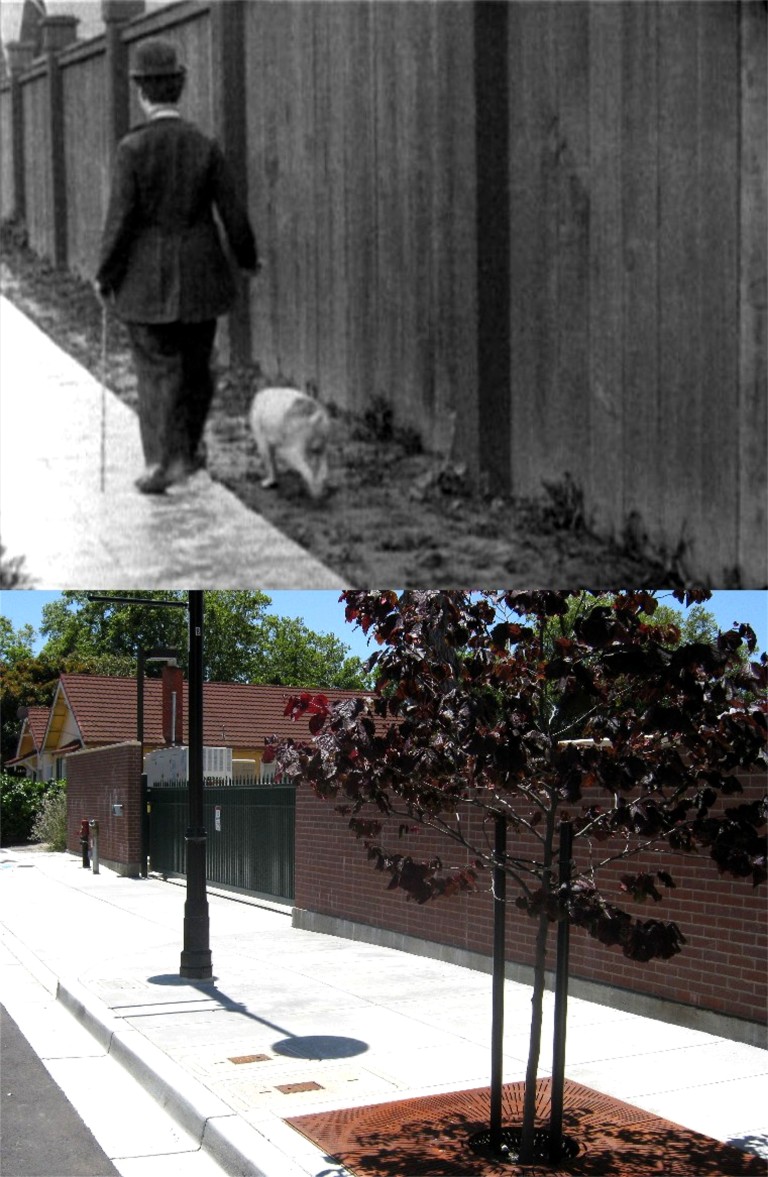 Chaplin wanders down G Street past the fence of the Essanay Movie Studio back lot followed by a puppy he shared his lunch with earlier in his 1915 movie ‘The Champion’, and where Charlie and his little buddy were walking today.

Chaplin confronted by a police officer in ‘The Champion’ (Look at that uniform!) and the same corner today.

Chaplin, preparing for the big fight, works out in a scene filmed in the back lot of the studio. Notice the mountain above the fence in the upper left of the Chaplin scene. You can still see it from Niles Blvd. and G Street today. I learned about the mountain comparison from reading John Bengston’s fine book ‘Silent Traces’.

After winning the big fight, Charlie puts the moves on Edna, but when they become aware of the film audience, he kisses her behind his beer jug. (That’s a nice size beer!) Incorporating the audience into the film was a relatively new gag back then.

The spot where Charlie fought and got a kiss from Edna as it looks today:

2 thoughts on “Charlie Chaplin in Niles”