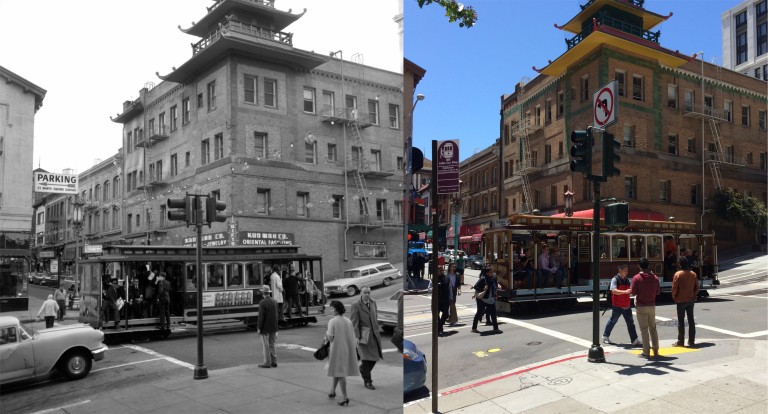 Cable cars pause at the intersection of Grant and California to catch their breath before chugging the rest of the way up Nob Hill. They don’t do that really, but I’d like to be a writer someday, so I thought I’d try that line out.

Finding these locations is always fun for me, but it can also be challenging, especially if the location is misidentified. Above are three great pictures taken in San Francisco on December 8th 1941, the day after Pearl Harbor. Although their site is a knockout, Shorpy identifies these historic photos as being taken at Montgomery and Market Streets, and that’s not the location. Nothing matched up, nor did any of the old pictures of that intersection that I could find. The key to finding this spot was in the tall building in the distance at the center of the first comparison picture. That looked to me like the old Sir Francis Drake Hotel. If it was, then I had to find out what angle the pictures were taken from. You can’t see the Sir Francis Drake from here anymore, but these pictures were shot on the northeast corner of Sutter and Kearny looking west. I had a weird feeling standing on this corner when I took these, thinking about the people here almost 75 years ago, and what was going on in their minds.

There’s three crossroads in this shot looking down Powell Street toward Market; Geary, O’Farrell, and Ellis Streets. No, that’s not a Stud Hotel sign on the left in the vintage picture; I did a double take too. It’s an Art Studio sign behind the Hotel Stratford sign.

“Patience is a virtue”, only it’s one of the many virtues that I don’t have. Still, when it comes to getting two cable cars in the picture at the only spot where the California Street and Powell Street cable car lines cross as in the vintage photo, I had to be patient. Cable cars don’t always get here at the same time. I got a reasonable facsimile. That little pagoda on the right isn’t a convenient place to go to the bathroom, (I wish!) it’s a control box that regulates which cable car has a green light to go into the intersection before stopping to pick up or unload passengers when they get there together. The old Crest Garage that goes back to the 1920’s is still there behind the cable cars, only now it’s a parking garage.