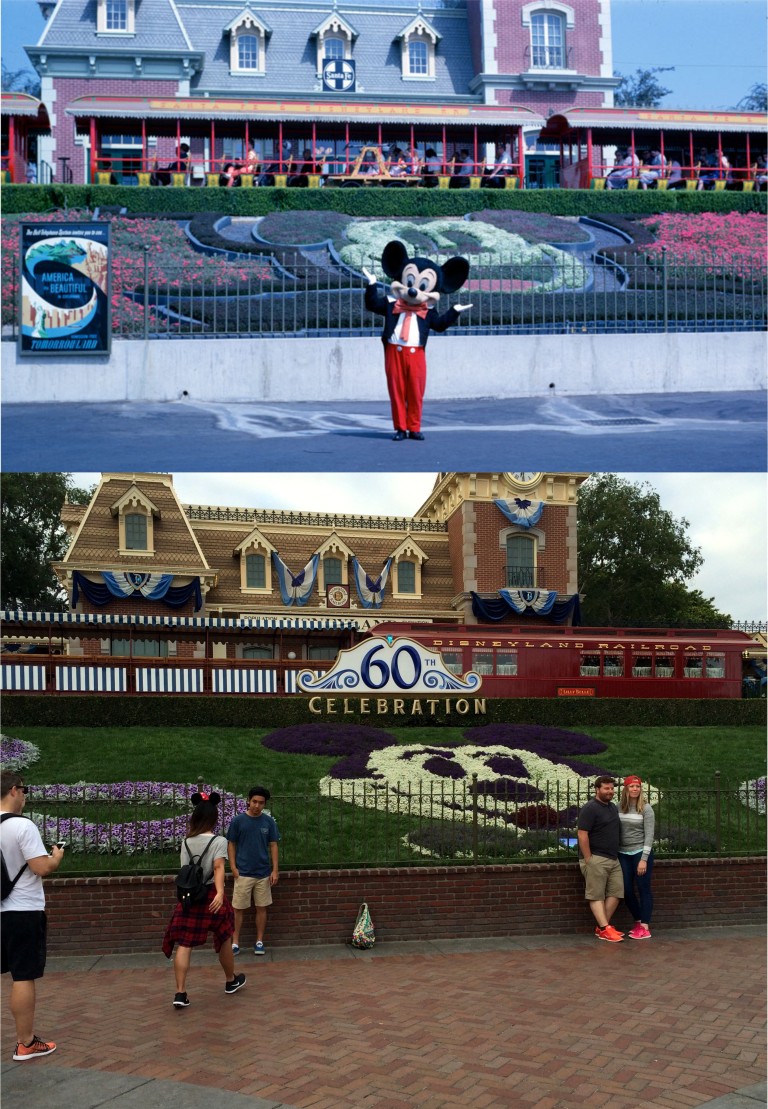 The Disneyland entrance in 1962:

Walt Disney dedicating Sleeping Beauty’s Castle: He would have been sitting on these rocks. I don’t like the looks of those two culprits behind him! 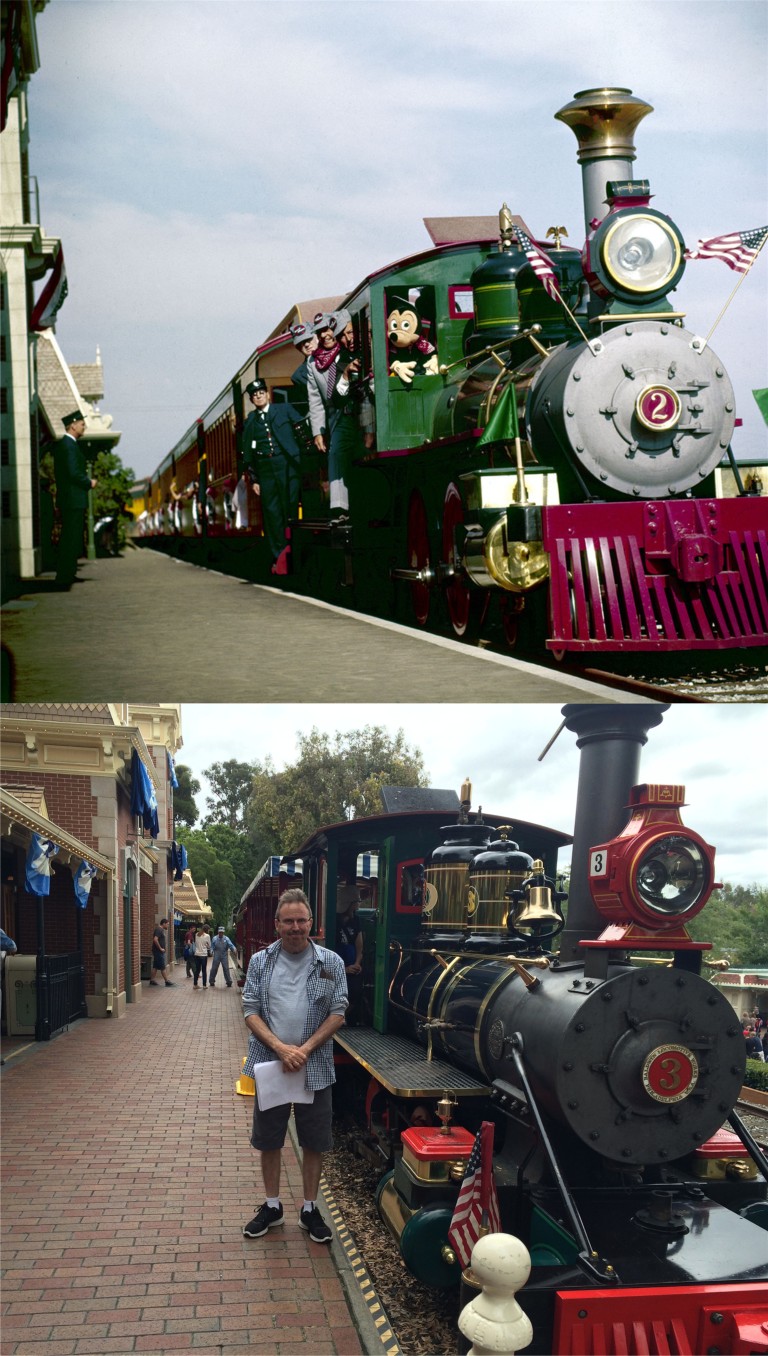 Walt Disney engineering, with the help of Mickey Mouse, the inaugural run of the Disneyland Railroad (DLRR) in 1955:

I wish the crowd was like this quiet day on Main Street in 1963 when I was there this time.

Disneyland closed and in mourning the day after Kennedy was assassinated: By a coincidence, the flags in Disneyland were at half staff for Police Officers Memorial Day when I took this picture last Sunday.

The Autopia in Tomorrowland: I like the way they all pulled over for me.

The most decorated soldier of World War Two; Audie Murphy and his family, next to Sleeping Beauty’s Castle in 1956. (davelandweb.com) 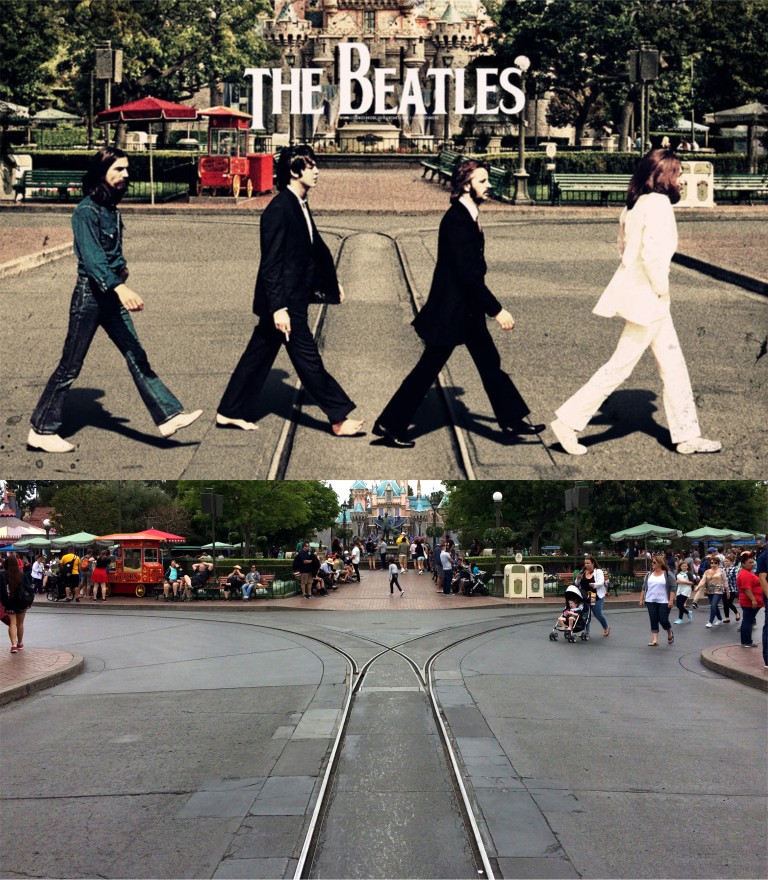 The spot where this famous picture was taken, NOT!

The Bride of Frankenstein, (Elsa Lanchester) and the Hunchback of Notre Dame, (Charles Laughton) at the Main Street Cinema in the 1950’s:  (Disneyland the First Quarter Century)

In 2014, Disneyland hosted a Facebook contest to select the best pictures from each decade Disneyland has been open. My friend Cindy made runner up from the 1960’s with this picture of her and her mom on the Disneyland Pack Mule Ride, (An E Ticket ride, by the way). Alas, she didn’t get the big ticket! The Pack Mule Ride left from the old Nature’s Wonderland Town. The Thunder Mountain Railroad ride now occupies the location of the mule rides.

Where birds sing to flowers, and large mice still walk.
Where pirates still plunder and “dead men” don’t talk.
Where hinges still “creak” and doorknobs still rattle,
I throw my vote in for the kid in the saddle.

Where kids ride on freeways in small open cars.
Where some things are gone now, like rockets to Mars.
Where witches still poison, and fairies still rule,
I throw my vote in for the kid on the mule.

Where “Indy” still whips it, and hippos still charge,
you can ride to an island on Tom Sawyer’s barge.
Where horses don’t trample, or poop in the street,
I throw my vote in for the kid in the seat.

You can eat mouse head pancakes, or buy a straw hat.
You could spit off the Sky Tram, (and what’s wrong with that?)
Where beckoning ghosts still frighten this honky,
I throw my vote in for the kid on the donkey

Although, so many things that I like have been hurled,
when you run into friends there, it’s still a “small world”
Hold tight little toddler, now there’s a fine lass!
I throw my vote in for the kid on the ass.

One thought on “Disneyland”