The parking lot from the entrance to Coit Tower in the 1930’s and today: The balustrade with the urns was considered unsightly by many, and was removed by the 1940’s.

Chinatown in 3D colors: Not really, but that was popular in the 1950’s when the top picture was taken.

This picture bothers me! I love the view from Coit Tower, but sometimes it would be nice to just enjoy the Telegraph Hill view from the parking lot, like you used to be able to, without the claustrophobic elevator ride to the top of the tower. For some reason, they will not trim the bushes that now almost entirely block the view from ground level. I’m not a horti….. a horti….. a person who cultivates plants, so I don’t know if there is some reason that this will harm them or if this is just a deliberate attempt to force visitors to pay for the ride to the top of Coit Tower.

Sansome Street at the bottom of Telegraph Hill:
“Hey, Mulldoon, we better run the license plate so we can notify the owner of the boulder that crashed down on the person’s car.”
“Wait, Officers, don’t leave! I’m inside the car!”
They’ve shored up this area since this Images of America picture was taken in 1948. 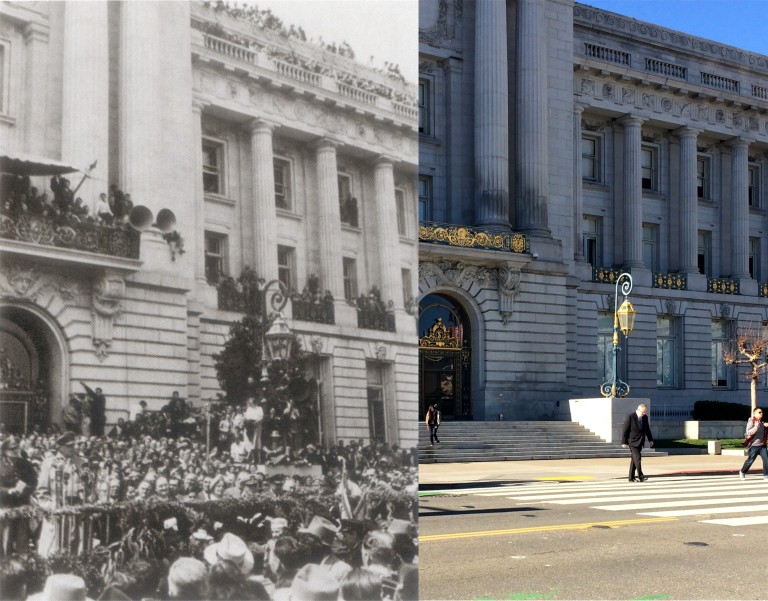 “I shall return!” He wasn’t taking about San Francisco. One of the principal players in the drama of World War Two, General Douglas MacArthur, giving a speech in front of City Hall in the 1950’s during the Korean War.

A guard in a tower on Alcatraz Island when it was still a penitentiary: That would have been good enough for me; he probably had a pretty high powered rifle.
“Hey, Mugsy, let’s go back to the cell.”