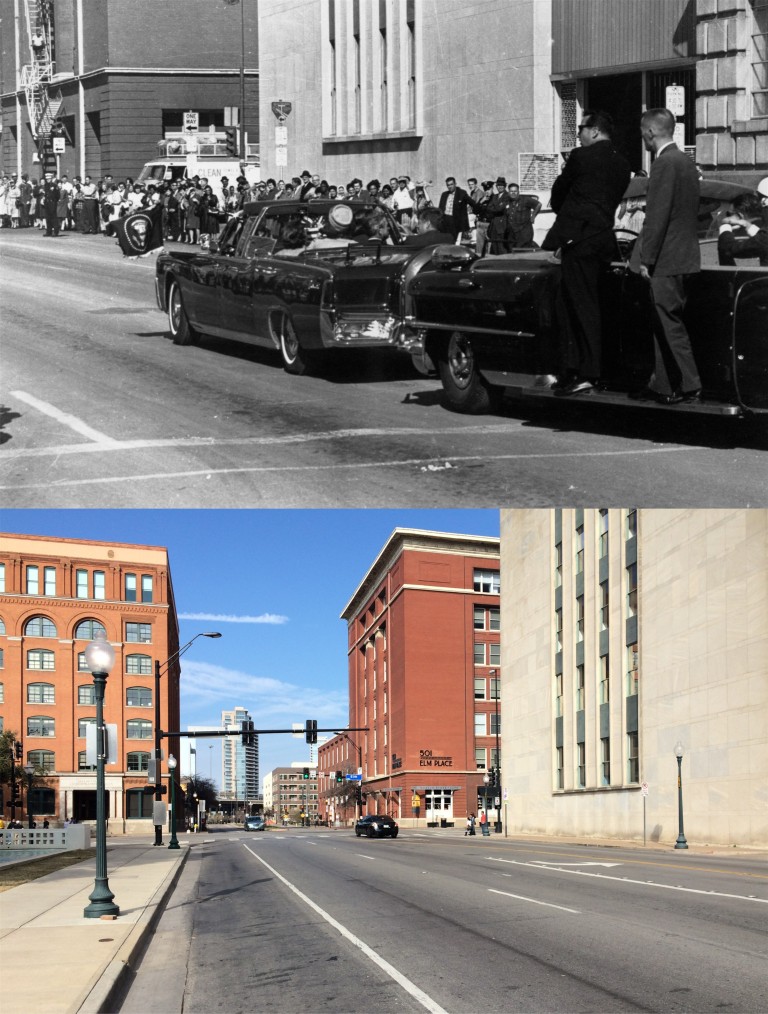 The limousine carrying President John Kennedy, His wife Jacqueline, the Governor of Texas, John Connally, and his wife, Nellie, as it approaches Elm Street from Houston. The limo made a left turn on Elm, and passed underneath the Texas School Book Depository, seen on the left in my larger picture of the spot. Lee Harvey Oswald fired from the second window from the top of the last row of windows at the right end of the building. 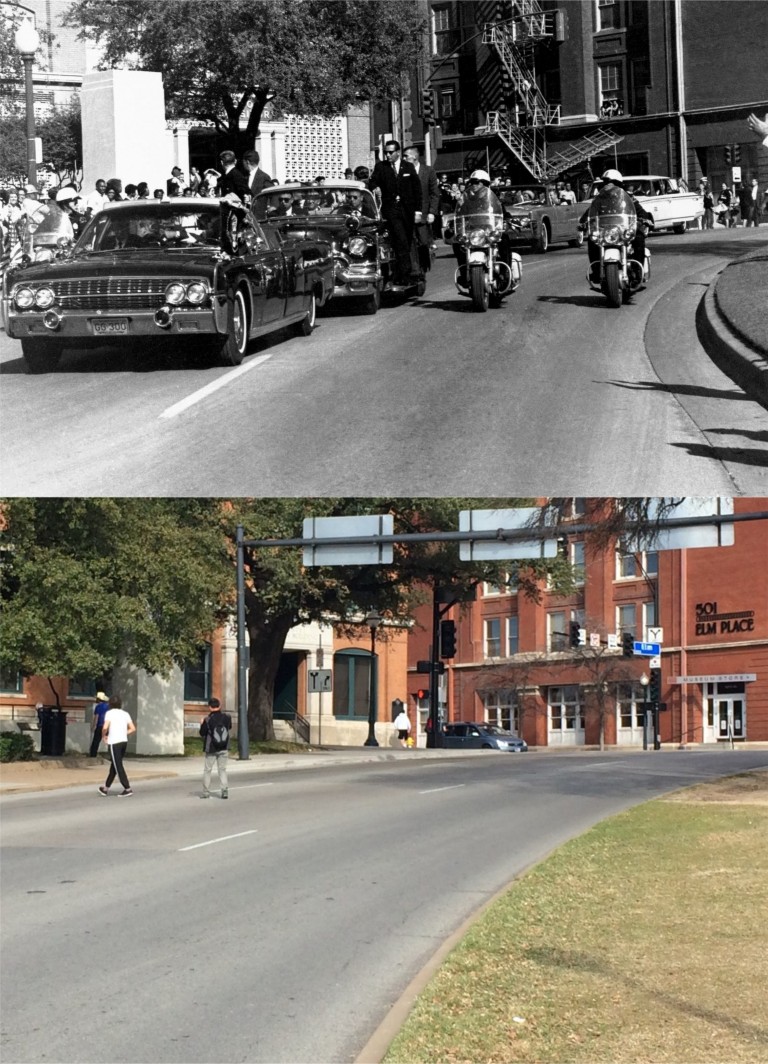 Kennedy’s limousine has turned left onto Elm Street, and is passing underneath the School Book Depository. The President, at this point, has been hit in the back, and raises his arms to his neck. Jackie takes hold of one of his arms. 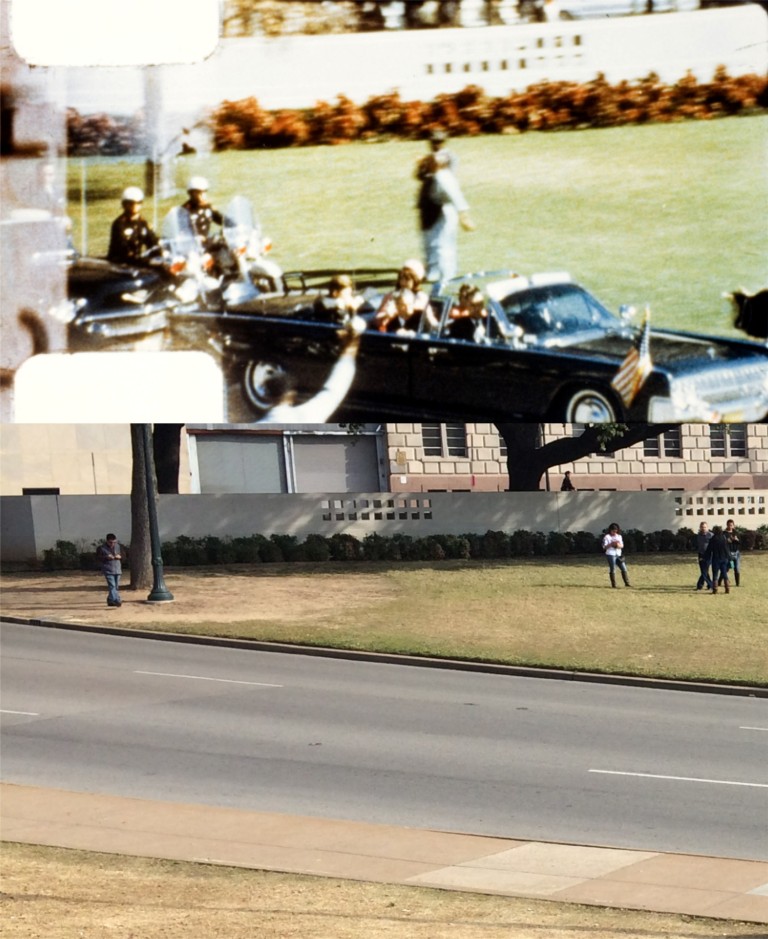 Wikipedia refers to the Zapruder film of Kennedy’s assassination as “one of the most studied pieces of film in history”. At this point of the film, Kennedy has been struck in the back and raises his arms as Jackie Kennedy turns toward him. My picture at the bottom was taken from the exact same spot that Abraham Zapruder shot his film.

The Zapruder film follows the limo as Kennedy turns toward Jackie, who realizes something is wrong. The next frame shows the head shot wound that shattered Kennedy’s skull. It’s graphic and disturbing so I left it out. 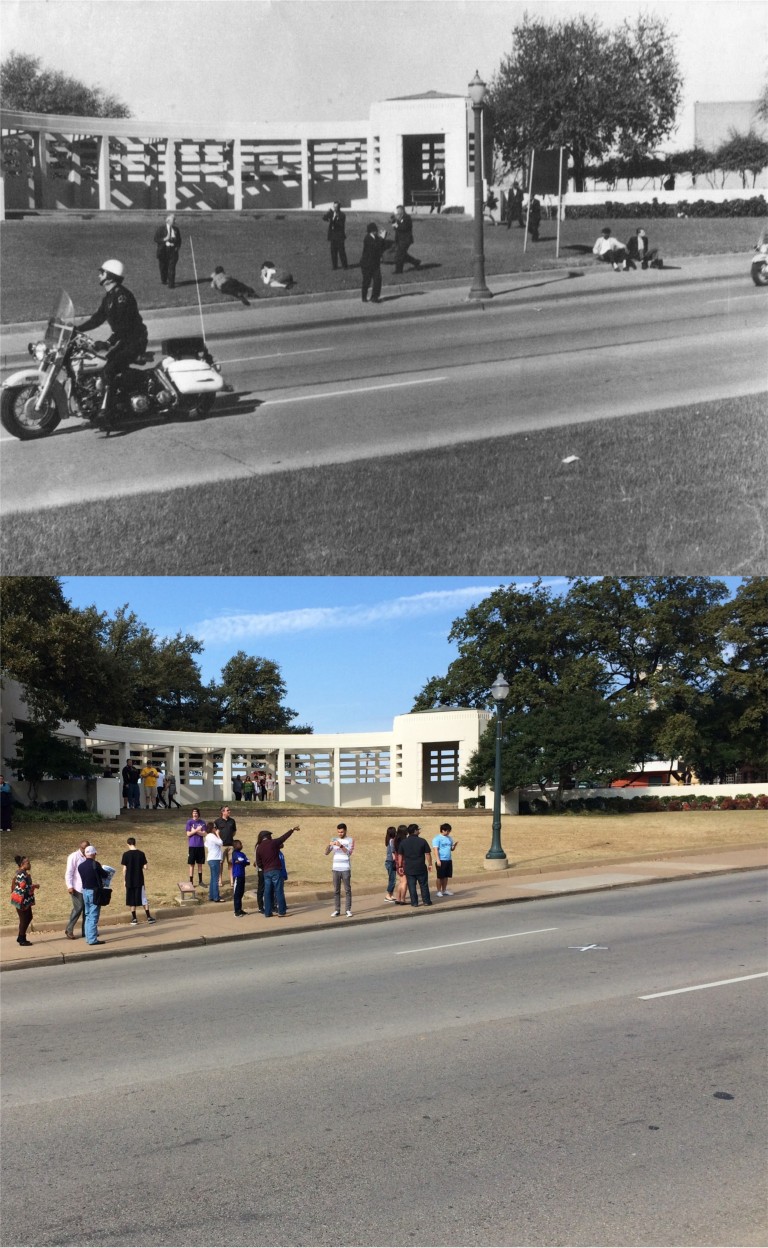 The last of the motorcade passes down Elm Street just after the shots. Notice the couple lying on the grass covering their children. 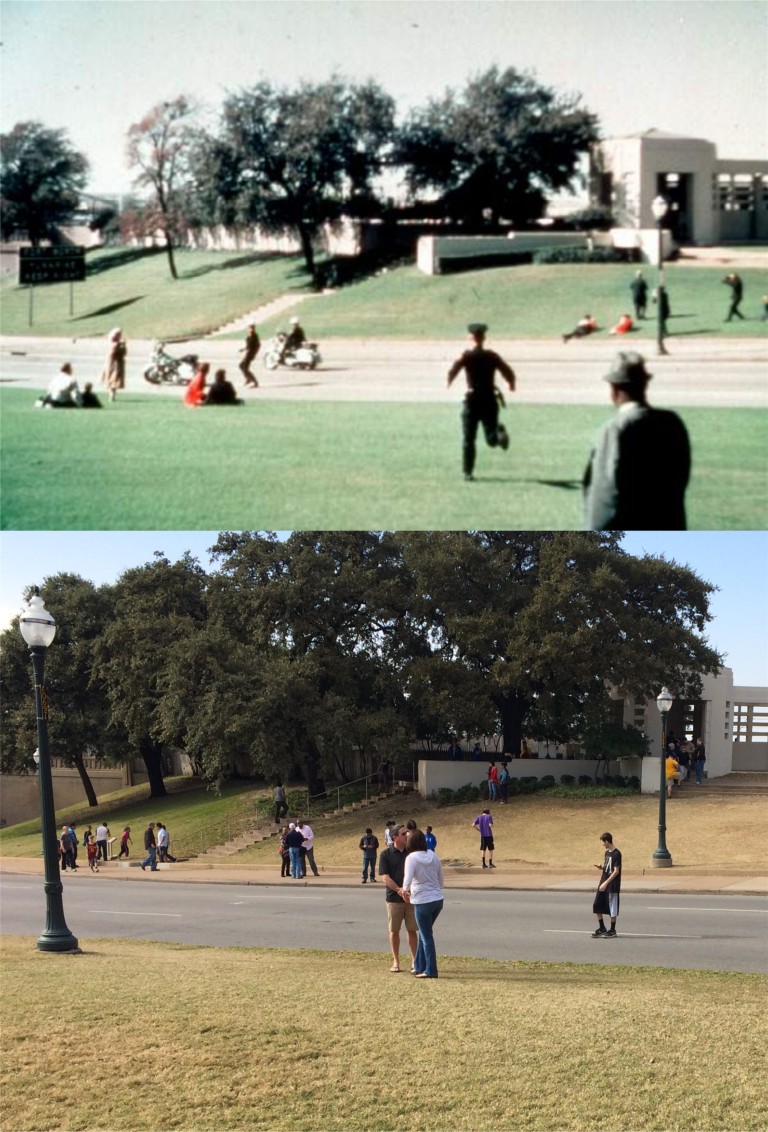 The legendary “grassy knoll” where the steps are going up just after the wounded President passes by. This is where the conspiracy theory centers around. People do seem to be concentrating on this spot including the police officer running toward there. You can see the couple who were protecting their children in this photo too. 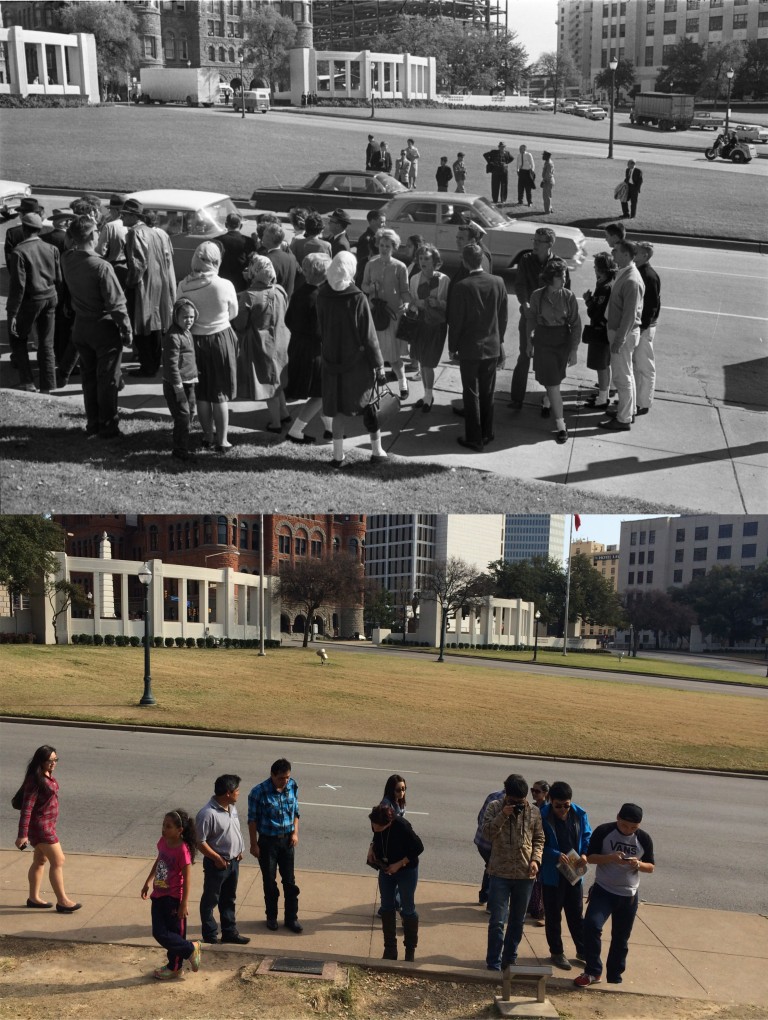 As Kennedy’s limousine rushes toward Parkland Hospital, people stand around in Dealey Plaza stunned and confused. 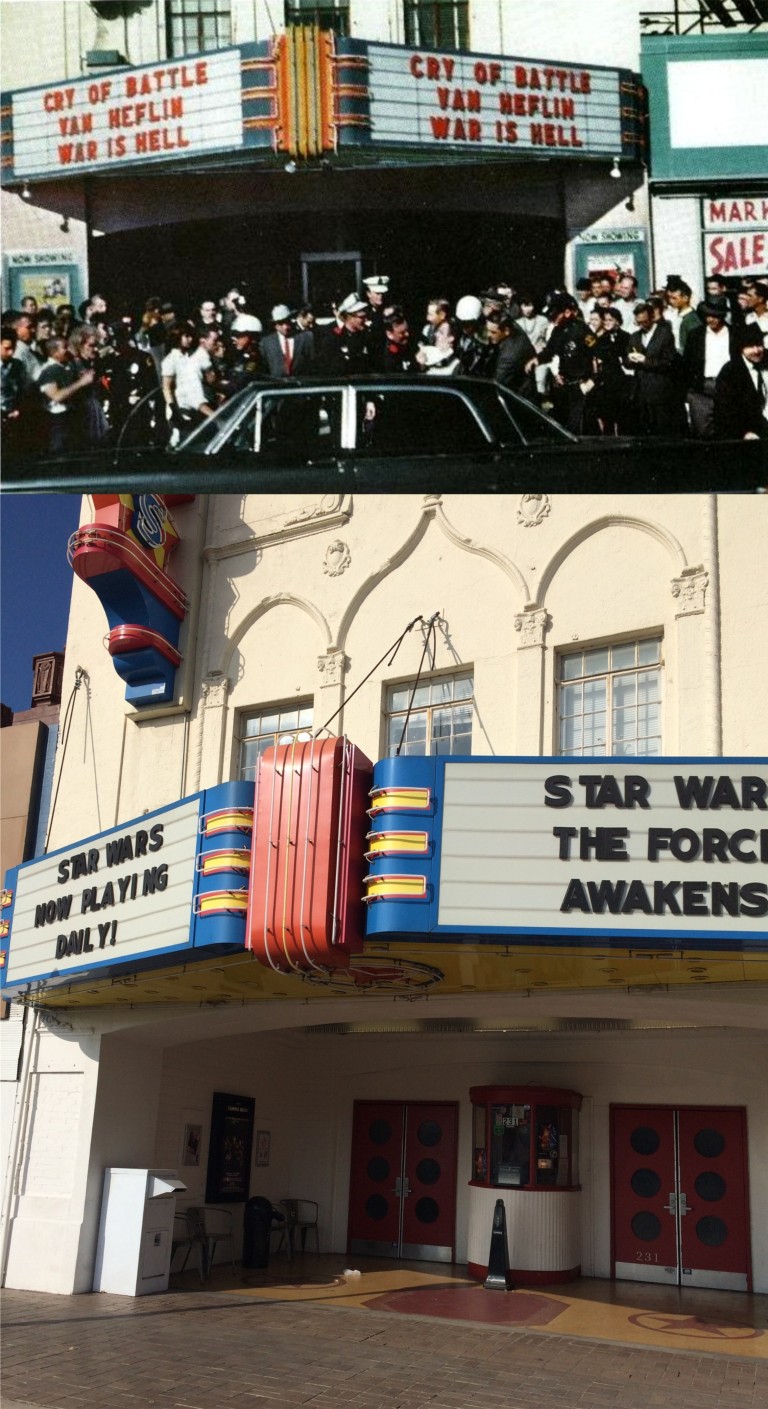 After shooting Kennedy at 12:30 PM, Oswald took a taxi to East 10th street, where he murdered Police Officer J. D. Tippit. To point out how stupid Oswald was, less than an hour after becoming the most wanted man in America, if not the whole world, Oswald ducked into a movie theater without paying for his ticket causing the manager to become suspicious, and call the police. Oswald was arrested at the Texas Theater on West Jefferson Blvd. Built in 1931, the theater is still open, and now has landmark status. In the top picture, Oswald is being taken from the theater to a waiting police car. Notice the movies playing then and now.