The skyline of San Francisco from the opening scene of the 1941 film. 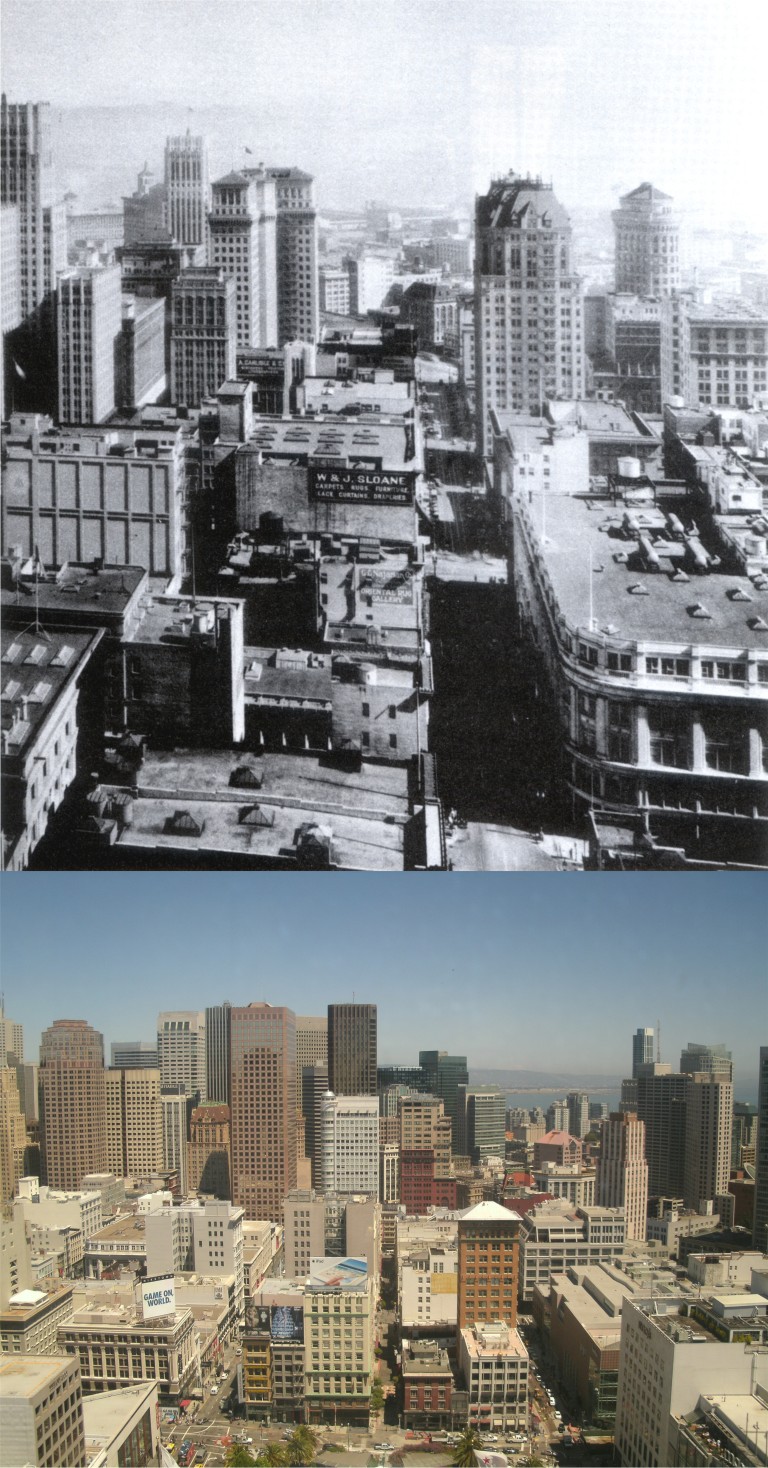 Part of Spade’s office building can be seen peeking out behind what is now the Banana Republic Building.

Awakened by a telephone call in the middle of the night saying that his partner, Miles Archer, has been shot, Spade takes a cab to the Stockton tunnel. {Where Bush Street roofed Stockton before slipping downhill into Chinatown, Spade paid his fare and left the taxicab.} 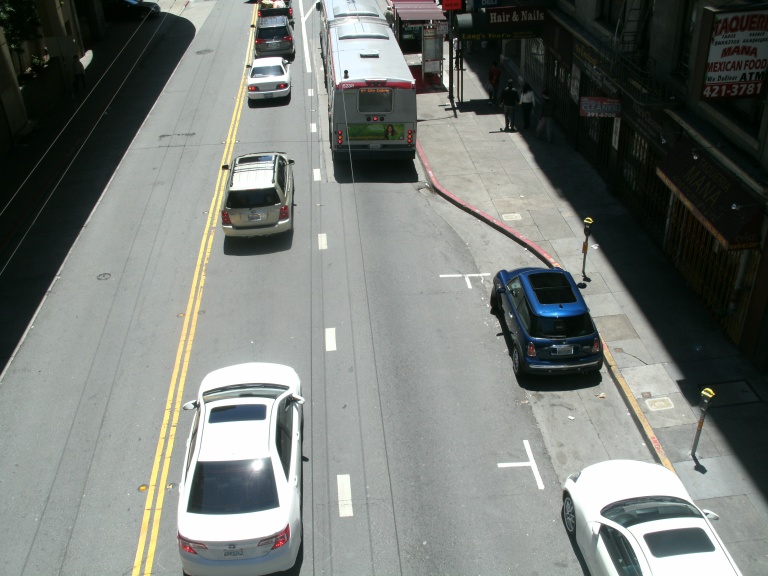 {Spade crossed the sidewalk between iron-railed hatchways that opened above bare ugly stairs, and resting his hands on the damp coping, looked down into Stockton Street. An automobile popped out of the tunnel beneath him with a roaring swish, as if it had been blown out, and ran away.}

Burritt Alley, where Miles Archer was “done in”. The copper colored building on the left, which was not there in 1928, would have been the spot where Archer was standing when he was shot. Notice the plaque on the wall behind the Burritt street sign. It rather gives away the denouement of the book, but it won’t spoil anything. 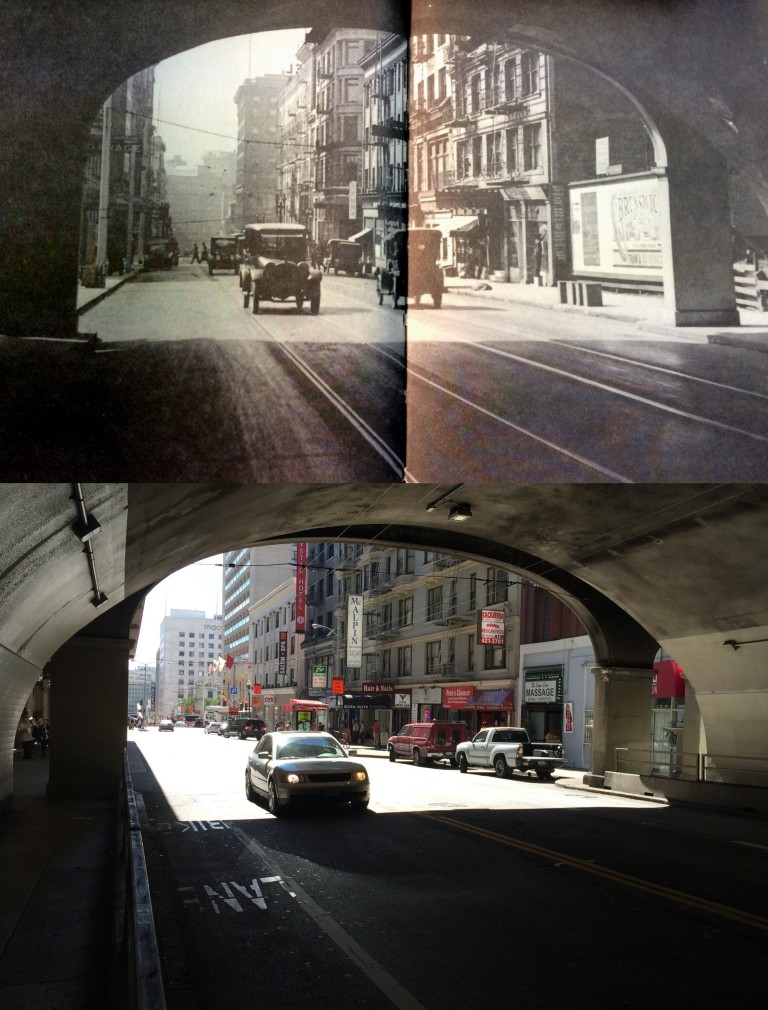 A photo taken from inside the Stockton Tunnel looking south from one of Don Herron’s books on Dashiell Hammett shows the billboard on the right where Miles Archer’s body came to rest after rolling down a hill. {Fifteen feet down the slope, a flat boulder stuck out. In the notch between boulder and slope, Miles Archer lay on his back.} The building with the massage sign occupies the spot today.

A Miles Archer update: On October 11th 2018, I was in the area working on another post when I took this picture of the Stockton Tunnel. It’s looking back into the tunnel where I was in my previous 2015 photo. It shows another view of where Miles Archer’s body rolled down after he was shot by Brigid O’Shaughnessy. The Green Door Massage and Sauna is the building that now occupies the empty lot where Miles was murder.

The Palace Hotel and Garden Court where Sam Spade stops for breakfast and lunch in the book: 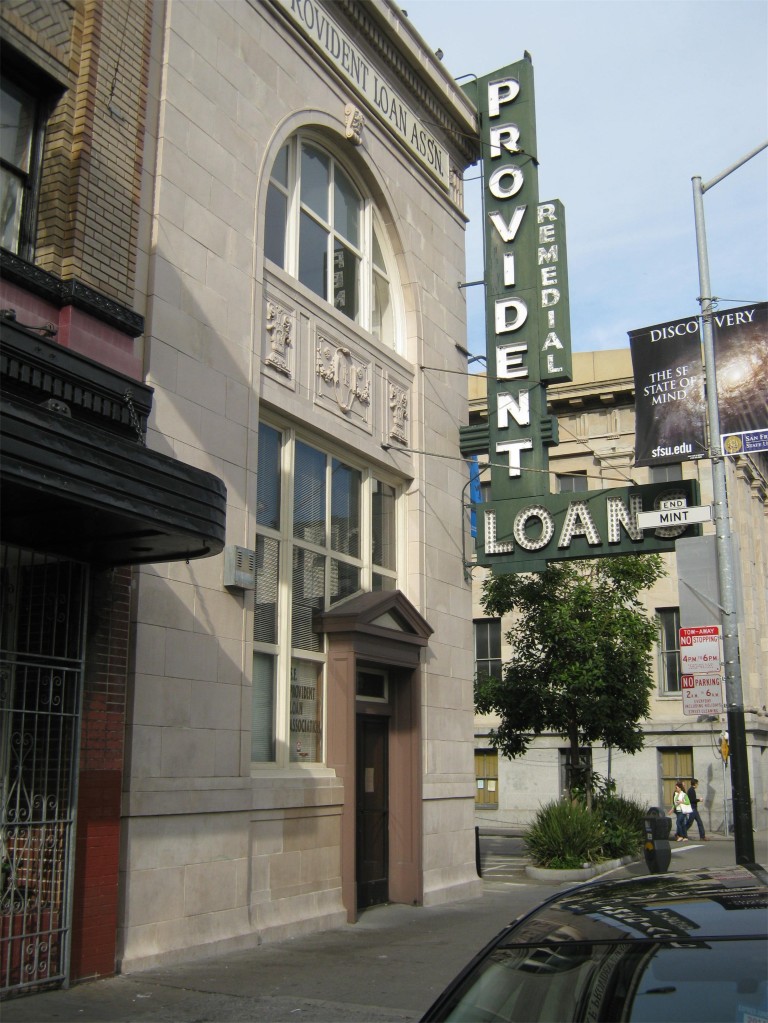 Brigid O’Shaughnessy hires Sam Spade to find the falcon and offers Spade her body for his assistance, Instead, he makes her hock her jewelry as payment for his services. {“You’ll have to hock them.” “The Remedial’s the best – Fifth, and Mission.”} Hey, he’s no dummy, what if he didn’t like it! Remarkably, the Remedial’s still there loaning money today.

Brigid gives Spade the slip later on, but he learns that the falcon is arriving by boat to San Francisco. He goes to the Call Building to buy a newspaper for ship arrivals. The Call Building at Third and Market is the building with the ornate crown in the center. {Spade went to the Business Office of the Call, bought a copy of the previous day’s issue, and opened it to the shipping-news page.} You can see part of the remodeled Call Building, now called the Central Tower, in the background of the modern picture.

I was about to grill a female suspect to find out where the falcon was, when she got the drop on me. She stuck two 38’s in my back, and also a gun! She led me to John’s Grill, where the precious statue is kept under guard. John’s Grill on Ellis is a Maltese Falcon Shrine. {Sam went to John’s Grill and asked the waiter to hurry his order of chops, baked potato, and sliced tomatoes.} They serve “Sam Spade chops, baked potato, and sliced tomatoes” today, but it costs a lot more than it did in 1928. You can also buy a Brigid glass here to take home as a souvenir. The statue of the Maltese Falcon upstairs is said to be one of the three falcon statues used in the Bogart movie! Notice the book inside their showcase. Just like mine!