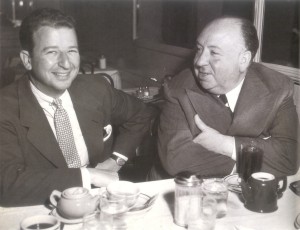 Caen With “Hitch”; a photo from Barnaby Conrad’s book about Herb Caen This was part of an article the columnist wrote when the Director was in town filming ‘The Birds’. “On Monday afternoon the portly figure of Mr. Alfred Hitchcock was to be seen emerging with a definite “thwuck” from a large black limousine on Powell. As the pigeons fluttered about our head and shoulders, we talked about ‘The Birds’ which Mr. Hitchcock described as “a fowl epic, if I ever made one.” “The ads” I said. quote you as calling it the most terrifying picture I ever made.” Is that true?” “Oh, indubitably.” He replied. “I financed it myself and I’m terrified at the thought of losing all my money.” (Thumbnail image)