“My own place in this thing called photography? Lately it has come to my attention that perhaps I have a place in it, not entirely held by others.” (Minor White; Wikipedia)

This post is a collection of updates of Minor White photographs taken in San Francisco in the late 1940s and early 1950s. When you look at my updated pictures, it’s easy to see who the master is and who’s the imitator. Still, San Francisco has changed a lot since the vintage pictures were taken, and my pictures are only geographical comparisons of a few of Minor White’s images from a long ago San Francisco. The source pictures are from the digital library of the California Historical Society page on the internet. (Thumbnail images)

An ambulance on Market Street, between First and Second Streets, in 1951: The Hunter-Dulin Building on Montgomery and Sutter Streets where Sam Spade had his fictional office in the ‘Maltese Falcon’ is almost completely blocked out from the view here by the Wells Fargo Building, built in the 1960s.

Montgomery and California Streets, the heart of white-collar San Francisco, looking south along Montgomery Street in 1950

Looking across the Embarcadero toward the old Hills Bros. Coffee Building in 1949:

A lot of Minor White’s San Francisco photos were taken along the Embarcadero. This view is looking toward Telegraph Hill, between Union and Filbert Streets, in 1949. 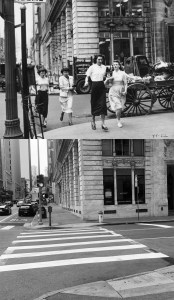 This is one of White’s most famous pictures, taken on the northeast corner of Pine and Sansome Streets in 1949. I’m not sure if the 49 – 52 at the bottom of his picture represents the number of his pictures he took in San Francisco.

Where Lombard Street comes in to the Embarcadero in 1949: This is a great shot of a Belt Line Railroad engine.

Where Filbert Street used to merge with the Embarcadero in 1949: This is the view today from Levi Strauss Plaza about where the vintage picture was taken: Although the Levi Strauss Plaza, built in the early 1980s, is a great spot for catching some sun or having a bag lunch, there’s a lot to be said for the New Deal Restaurant. Like ‘Alice’s Restaurant’, you could have probably gotten anything you want.

In front of the Pacific Union Club in 1949: Grace Cathedral is in the background. Construction on Grace Cathedral had been halted by 1949 and the remaining work, along with the south spire, was not completed until 1964.